Since the first microwave ovens available to the consumer appeared in 1967, for many they have become indispensable helpers in the kitchen. This is one of the fastest, easiest and safest ways to heat food. However, many still doubt whether it is possible to reheat food in the microwave or is it unhealthy. 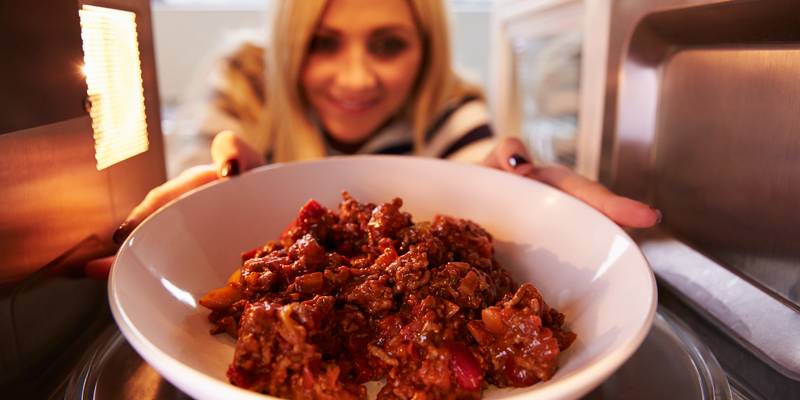 Can I reheat food in the microwave or is it harmful?

Since the first microwave ovens available to the consumer appeared in 1967, for many they have become indispensable helpers in the kitchen. This is one of the fastest, easiest and safest ways to heat food. However, many still doubt whether it is possible to reheat food in the microwave or is it unhealthy.

Some people believe that radiation from microwave ovens increases the risk of cancer. Some say microwaves destroy nutrients in foods, which can lead to micronutrient deficiencies. Others fear that they have not been sufficiently studied, so it is better to play it safe and not use them at all. Who is right?

There is a lot of evidence that the claims about microwaves are groundless. This is just one example of the application of science in everyday life, and it’s time to stop worrying about it.

Despite the constant stirring up of fear on the Internet, there is still no evidence of the dangers of microwaves. A lot of studies have not only proven their safety, but also that for some foods it is the healthiest way of cooking.

There are legitimate concerns about plastic containers for microwave ovens, but at the expense of their perceived danger, not everything is clear.

The alleged danger of microwaves

There are 4 main points of concern about the safety of microwave ovens:

Let’s take a closer look at each of these statements.

Myth # 1: Radiation from microwave ovens is a health hazard

When we hear the word “radiation”, pictures of nuclear power plants, a nuclear explosion and all the ensuing consequences arise in our minds. Not everyone will want to use the same technology for cooking.

But the fact is that this is a completely different technology.

Radiation is a general term that includes any kind of energy in the electromagnetic spectrum.

Everything around us emits some kind of radiation: a light bulb overhead, the ground under our feet and, of course, the screen you are looking at right now.

There are different types of radiation depending on the wavelength and frequency of the waves.

As you can see from the table, some waves are longer than the height of the building, while others are the size of an atom.

Sources of various types of radiation

Radiation of any kind becomes weaker at a distance. When microwaves travel freely in space, they dissipate too quickly to heat anything.…

The principle of operation of a microwave oven is based on “locking” microwaves in a confined space. The products absorb them before the radiation is scattered.

Another property of microwaves that makes them ideal for cooking is that they only heat molecules with a high water content. Therefore, the glass hardly heats up in a microwave oven – most of the molecules in it are not affected by microwaves. When you cook food in the microwave, radiation acts on it, causing vibration and friction of water molecules. Friction causes the temperature to rise and the food heats up.

The wavelengths that microwave ovens emit are long enough to boil water, but not to damage DNA. Therefore, they are not able to harm health or infect food with radiation.

Can a part of the radiation get into the external environment and is it harmful?

No, if the device is working properly. The wavelengths generated by …