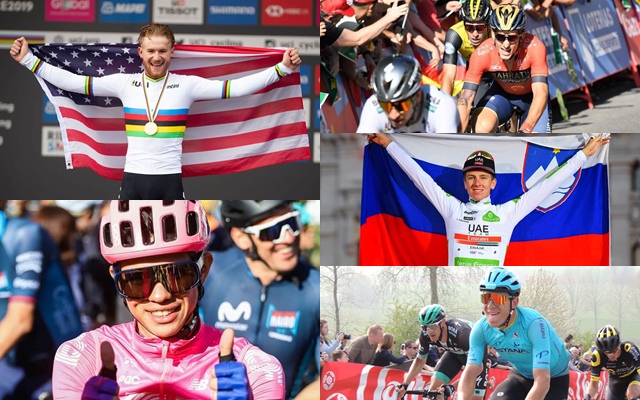 The UCI World Tour 2020 calendar is already a reality and a new cycling season is just around the corner. The year 2020 is expected as one of the busiest of recent times. To the excitement of the great classics and the three great laps in stages (Giro, Tour and Vuelta) we must add a new edition of the Olympic Games. A competition of Tokyo 2020 that men like Alejandro Valverde have already declared to have between eyebrow and eyebrow.

Last year we saw the definitive emergence of Egan Bernal and the consolidation of cyclists such as Primoz Roglic or Julian Alaphillipe. Three corridors that focus the main focus of attention for this new season.

But what other runners are called to do great things in this 2020 season? What cyclists emerge strongly among the youngest? Cycling is changing and new generations are hitting hard.

As an expert in the field it is time to get wet. Next I go with a brief compilation of cyclists that for me can "petarlo" in this 2020. Cyclists who for different reasons should take a step forward in this new course. Some faces are familiar, but new names appear that you should start to mark with a fluorescent marker.

Take note! Are you missing a name? Let us know your opinion through the comments.

The victory of Egan Bernal in the last Tour de France was a surprise for many but not for me that I already anticipated at the beginning of last year that the Ineos runner had everything to take the gala round. Egan Bernal is the true yellow dream of Colombia and I fear that the South American country has a cyclist for years.

Bernal has it to master cycling in the coming years. An innate ease of climbing and qualities not negligible in the fight against chrono and in small group sprints. In addition, the Colombian is perfectly wrapped by the best cycling team in history. In 2020 we will see what he is capable of but that nobody is surprised if he is able to take his second tour with 23 years.

Half season in the World Tour has been enough to see Sergio Higuita a diamond to polish for the future. The Education First cyclist has adapted perfectly to the highest category of world cycling and in the last Tour of Spain we saw him raise his arms. Higuita has the climbing genes of the best Colombian beetles and on top of a speed tip that can make a difference in the tight finals.

Education First and its three years of contract seem ideal for me to evaluate the real progression of this corridor. The start-of-season races with the Euskadi Foundation became small and Education First executives quickly rushed their jump to the World Tour. Be careful with Colombia because I assure you that not everything goes through Egan Bernal

Davide Ballerini is for me one of the covered cyclists this season. The Italian without making noise takes a meteoric progression and is that the 2019 season that has played with the Astana has not gone unnoticed either for me or for Patrick Lefevre.

It is true that the Italian has a hard time finishing off and that his sports record lacks great triumphs but the cyclist Lombardo has character and guts to offer spectacle in the classic one-day. The combativeness and the offensive attitude in the race have opened the doors of the best team for these races. In the Quick Step you will have to work for other cyclists but a lot of eye if you have any chance, it is quite fast and never gives your arm to twist.

Together with his partner Gaudu, Valentin Madouas is called to do great things for French cycling. Madouas climbs really well and above it has a speed tip that makes my mind delight with the beginnings of Laurent Jalabert.

Madouas has talent and Madiot knows that to squeeze it to the fullest he has to wait. In 2019, a demanding Giro d'Italia has already finished thirteenth and in 2020 I would not be surprised at anything that got into the Top 10 of Giro or Vuelta. With the tip of speed that I told you, I would not rule it out at all as a good runner in view of the classic ardennes. To aspire to the big laps maybe you need to improve the time trial and a little climbing.

Talent and combativity in abundance. This would define Iván García Cortina. The gijonés is another cyclist who has a meteoric progression and that undoubtedly at the time was right with the signing by Bahrain Merida.

Many questioned in his day this decision, but the two years he has been on the team have been great to learn, have freedom and know calmly what is cooked on the Belgian roads. Cortina has to take a step forward in this 2020. Last year we saw in Flanders how he is able to withstand the best 200 kilometers past. Technique and quality has enough to shine with its own light on the cobblestones. In small groups it has enough speed to aspire to everything.

The Slovenian was the great sensation of the last return to Spain. The UAE cyclist got into the final podium of Madrid showing a solidity worthy of the best vóltómanos of history. Pogacar far exceeded three weeks of career and at 21 years old he was never seen on the ropes.

It has wood and for me it is one of the men called to question the more than probable hegemony of Egan Bernal. Runner who comes up with the best and who can look from you to you to specialists in the fight against chrono. Ojito with Tadej because he is in the ideal team to grow without pressure. Matxin knows perfectly what it is to carry young promises and the five years of contract he signed with the Slovenian give him calm and tranquility to expect medium-term results.

It is not that he has devotion to Colombian cycling (which too) but that what is happening in the coffee country in recent years is amazing.

Iván Ramiro Sosa is, like Egan Bernal, another discovery of the magician Gianni Savio. The one that for me is the best scout of cycling, made known to the world the talent of this great Colombian climber.

It is true that the role of Sosa in the Ineos team during this first season has been somewhat subject to the media boom of Bernal, but I assure you that Iván Ramiro has enough talent to lead a World Tour team in a round of three weeks. With 22 years old he has a lot of travel and his good relationship with Bernal places him in a privileged position within the structure of Dave Brailsford. Ojito also with the Costa Rican Kevin Rivera, the latest discovery of Gianni Savio and in this 2020 will compete again with the Androni Giocattoli Sidermec team.

U23 World Champion in 2018, Hirschi is the great promise of Swiss cycling for one-week and one-day classic races. The Sunweb runner has had a first season of adaptation in which it has already been seen on some occasions.

At 21 he has everything to shine on all terrains. The somewhat disconcerting structure of the Sunweb clearly benefits its progression. Good runner who has to prove that the rainbow jersey was no accident.

He arrived at the Quick Step to work but his enormous qualities as a rodent have led him to emerge above names like those of Stybar or Lampaert. Asgreen is a real locomotive and in Flanders we already saw it give a real exhibition. The second position, just behind Bettiol, is a sign of the power of the eared Danish runner.

Asgreen has an engine to bust anyone on flat and broken terrain. With the departure of Philippe Gilbert the team will ask you to step forward. If I were a director, I would take the Asgreen wheel very seriously in view of the classic cobblestones.

Born in 2001, Simmons is the youngest runner on the list. At 18 he is the recent junior world champion. In 2019 it has had a crushing season. He has won virtually everything he has run and this has opened the direct doors to the World Tour with the Trek Segafredo. American runner I think he is in the ideal team to progress and be a future runner within the structure. At 18 he is very young and in 2020 he cannot be asked too much. A good adaptation to the category and some specific objective.