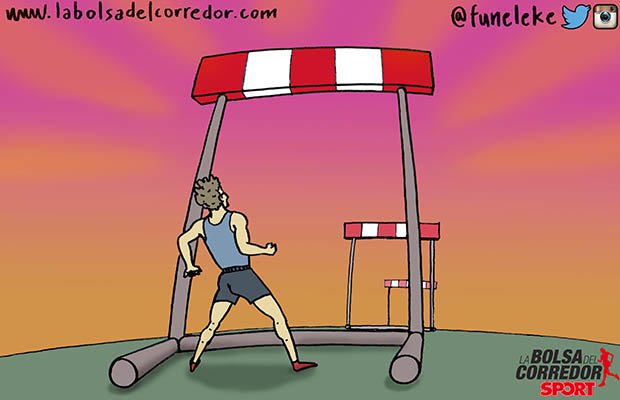 There is no way to tear down that border now. Hence the 2 hours 10 minutes have become the myth of the Spanish marathon. But you have to be realistic. Do not be influenced by what others do or by the times of 2h07 minutes.

In the human marathon, which is what is prepared in the Casa de Campo in Madrid, in the CAR of Sant Cugat in Barcelona, ​​in the Valonsadero forest in Soria or in the Parque Grande de Zaragoza, the main objective is to: get off 2 hours and 10 minutes. The outstanding one is that. And the myth, today, is also that in the Spanish marathon: knock down the 2 hours and 10 minutes, the damn 2h10m. We have to be realists. It doesn't matter if Africans move eight or ten minutes down. We have to live our reality and that is why we judge those 2h10m2sec of Camilo Santiago or 2h11m that Iraitz Arrospide nailed on Sunday in Valencia as a shadow. Who was going to tell us a couple of years ago if we didn't even know them. And yet, now they don't stop growing. And in the case of Camilo, 36 years old, it is said soon. These things must be valued. If you don't value them you are wrong.

The diagnosis is clear, in any case. Sunday was a fantastic day for the Spanish marathon because four athletes ran in less than 2h11m (Camilo, Houssame, Lamdassem and Arrospide). However, none went down from those 2 hours 10 minutes. But it is not easy. Since 2014, Javi Guerra has triumphed in all the marathons he has run and only once has he come down of 2h10m. Carles Castillejo, who brought down brands (27’39 ”in 10,000 or 3’39” in 1,500) that licensed him to go down, never made it. And not only that, but Dani Mateo, tenth in the marathon of a World Cup, has not achieved it either which shows that we are talking about a difficult issue that is getting obsessed: 2h10m. Moreover, each year the difficulty is reinforced: the more years go by without achieving it, the harder it seems to us.

We can ask ourselves why. Why is so difficult. Why still competing beautifully our athletes do not succeed. And the case is that on Sunday Camilo had him shot in Valencia. And if he had not stopped to celebrate it ahead of time he would have succeeded. But, precisely, that is what rages us the most, that once they were there they escaped in such an indiscreet way. The fact is that we are still happy to see that we have equipment, that we have raw material, that we have a level. Our marathon athletes do not lose 2 hours and 10 minutes, but they are competitive people. People who invite you to believe in them, to value what they get above what they need to achieve. Agree that we all would like to have more. But we can also be happy with what we have.

So I answered the other day to a fan of athletics who told me that these Spanish marathoners are now blankets. I was an example of those years in which we had a legion of athletes who did 2h07m: Fabián Roncero, Javier Cortés, Toni Peña, Alejandro Gómez ... It was not even necessary that they were media athletes. Then 2h07m fell without rest, at a devilish speed. And it's true. This man was not mistaken. Moreover, I also reminded him that at that time there were athletes like Alejandro Gomez himself who, in his first marathon, did 2h07m57 or Antonio Serrano who debuted in Berlin with 2h09m13. Today they would be gods. I could even remember those same years in which athletes with a diesel engine like Diego García or Alberto Juzdado reached 2h08m. And it came to seem so easy that we were champions of the marathon world for a reason. What times. Who caught them.

However, today I argue that comparisons, apart from odious ones, are avoidable. There are also children who fail to overcome their parents and in theory children must surpass their parents. But each generation has its thing. Each era is a world apart. Not accepting it is complicating life: I would not advise that frustration dominate us. That is why you have to assess days like yesterday in Valencia in which a 36-year-old guy like Camilo appears and makes you 2h10m02sec. Or what about that engineer who works in Sheffield, who juggles to train and that came from swimming: Iratiz Arrospide. If we don't enjoy these things, we don't have eyes, because they are our world champions now. And our Everest is clear: the 2 hours, 10 minutes that, cursed or not, are part of our reality today.