Silvia is a 55-year-old woman with multiple sclerosis who lives in a wheelchair. His son Eric will try to make a spectacular gift in the marathon of Seville that will share from minute 1: a Guiness Record.

Silvia is in bed. Maybe asleep. Perhaps thinking in silence or perhaps inaugurating the next day.

Eric is his son, an only child.

And give him a kiss. And ask her:

His mother has had multiple sclerosis for 20 years and that time has come when he can hardly move or change his position in bed.

Silvia is a woman who worked as an accountant, a woman her son remembers as "the most active woman in the world."

That was the case until he got the first outbreak of the disease and nothing was the same again. Eric was 14 years old, he had just left school that day and remembers when she told him how "A blow of reality".

And in the hospital they gave him a notebook explaining the disease and how he, who was just a teenager, should take care of the problem: understand it.

And since then he got used to saying "ok, I'm coming" at the speed of light was when his mother fell in the kitchen, in the hallway or on the street and could not get up. Either as now when he feeds her or when he accompanies her to the toilet and cleanses her to the last part of her body.

Eric is 27 years old today and Silvia is a woman of 55 who sees life go by and between the two next to their father, the third part of the puzzle, they cross "very, very sentimental days".

It is not easy to live in a prohibited direction.

But you can live. And value how Eric values ​​every time he kisses his mother, every time he changes the TV channel or every time he tells this story, he keeps on pulling calendar dates.

I'm telling her because Javier Matiacci, the journalist of ‘Onda Cero’, He wrote me to tell. If I hadn't said yes I would never have met her. 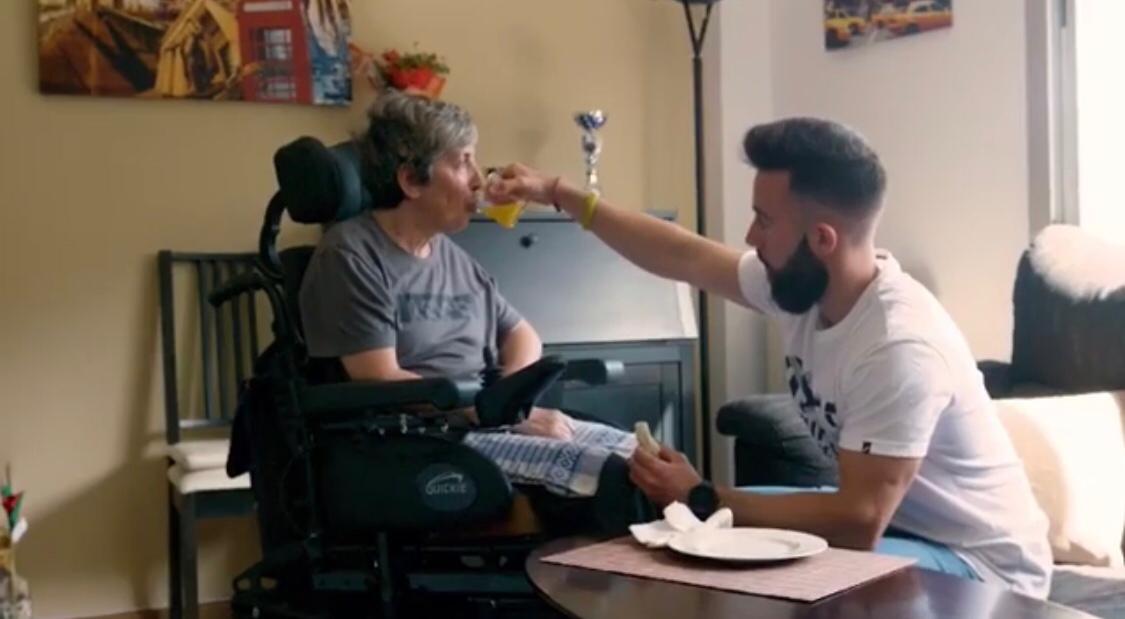 Eric wouldn't have told me the day he saw with his mother the movie ca Untouchable ’in which he would be Driss and his mother would be Philippe, in the wheelchair.

Eric wouldn't have told me what they got excited that day, what they cried that day: hands clenched, his next to his mother's.

She ran out of any plans, other than watching life go by, but Eric's life would be inexplicable without her. When he finishes work, when he finishes training, he is looking forward to coming home for a walk in good weather. But, above all, to see her, to tell her:

Eric played football until he was 17 years old and will always remember that it was his mother who took him, “Rain, snow, do the weather in Barcelona”.

That woman, apparently, was "pure nerve."

Eric may just be an extension of her today. One day he stopped playing football and then signed up for the gym and then started running and discovered the athlete inside. A guy capable of running the marathon for 2 hours and 43 minutes or the last half, the one in Seville, "in 1 hour 12 minutes" after being empty at kilometer 18.

He also tells me that from April 5 to 14 last year he went from London to Paris running, doing a marathon every day and ended Sunday completing the official Paris marathon in 4 hours 39 minutes after a cumulative beating of 410 km.

Today, all that is worth to get an idea of ​​who he is: Eric Domingo Roldan.

But the idea that Javier Matiacci wrote to me was not to talk about Eric, but to talk about Silvia's son. The same one who is preparing the marathon of Seville carrying his mother, from the first to the last meter, in that motorized wheelchair that appears in the photograph.

And she will travel to Seville by plane. And it will be the first time that Andalusia will step on. And the one who will refresh her in the race will be Eric. And the one who will clean his mouth. And he who will give him a dry fruit to mislead the tiredness of that woman who, for him, is the most important woman in the world.

If they go down from 2 hours 58 minutes 40 seconds, that's what Eric gets is preparing six days a week, will beat the Guiness record of all time.

And maybe it won't be easy because the last time they did it, in the Barcelona marathon, the clock left until 3 hours 14 minutes.

But there are stories like this that can be dispensed with without getting angry at the result: a hard and emotional story that reminds us that, above the results, there are feelings.

Maybe that's why today we least talked about the race. We prefer to do it slowly from a son and a mother who shoot us in the heart, that motivate us to put ourselves in their place, perhaps to recognize that we were luckier than they had when they discovered that what was happening to Silvia, the mother, “ They were not dizzy, no. ”

It was a multiple sclerosis.

But even so it was not enough to remove them from that place where life begins again: the starting line.