Andreu Blanes is a 28-year-old engineer who has only run two 3,000 obstacles in his life and has mortgaged everything to qualify for Tokyo. Live rent for € 300 in Madrid. He became 7 in the world in orientation and a phrase in Eusebio Cáceres' room changed his life:

-"Only those who see the invisible can achieve the impossible ”

The last day I was at INEF Juan del Campo approached me in his car to the University City Metro stop.

On the trip we talked about many people, including an athlete I did not know: Andreu Blanes.

"He has come here to qualify for the Olympics."

It occurred to me that a great story could exist in it.

After listening, I could promise that it is so.

Andreu Blanes is a 28-year-old athlete who one day entered the room, at the Blume residence, of Eusebio Cáceres, his friend and school mate in Onil (Alicante). There, in that room, he was dazzled for a phrase that Eusebio had stuck on the wall:

-Only those who see the invisible can achieve the impossible.

A picture was taken by his side and, joking with the impossible, Antonio, a friend of his, wrote inside the picture to make it look good:

-Hey, man, do you know that this has stopped being a joke, that I think I can go to the Games and that I will try?

Andreu had reunited his parents and his older sister, who works as a dentist in Onil.

- I can do it? Would you be willing to support me?

- We have always supported you and this time it will not be different - his parents replied.

Andreu Blanes was a boy from Onil (Alicante) who one day discovered the orientation races in the mountains. He went far, so far that he was runner-up in the junior world in Poland in 2011 and twice seventh in an absolute World Cup, just three seconds away from the medal.

Until he arrived the trainers said: "We started looking at the lists below." It was different with him. 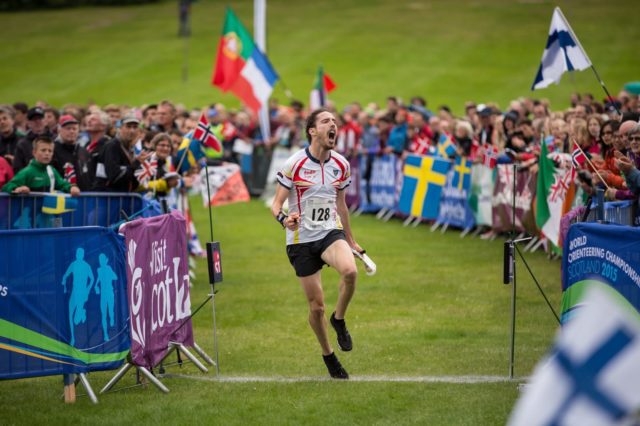 But, at 26, Andreu discovered a problem in the orientation: there was no money, he didn't earn money. At most, the rent paid by the Federation in the house of the Sierra de Guadarrama where he lived.

-The credit is running out - he explained at home.

And among the possibilities that occurred to him was to leave everything, to return to Onil, to start working, because he is an engineer. He has a degree in civil engineering and has a C-1 in English: there is no lack of training.

But then he remembered that older man who once put goosebumps on him.

-I wish I had tried to do what I liked when I was your age. Don't be in such a hurry to find a job, that will come. But the dreams that go away don't come back.

It was one of the arguments he explained at home:

-Not all is the money. At my age, not everything is money.

His sister broke the silence:

-Andreu, where are the next Olympic Games that I don't remember?

Since then, it has been two years that have flown by.

Today, Andreu lives in a shared flat on Avenida de Valladolid: he pays € 300 for his room, goes on Monday afternoons to make the purchase at Mercadona, drives a Toyota Yaris that has already turned 8 and every day he walks up to the tracks of the INEF.

There Juan del Campo received him for the first time with an idea that was recorded since he was accepted in the group:

-There are people who are to other things and people who know what they want.

Andreu Blanes looked straight ahead and didn't doubt what he saw, which was the same thing he wanted to see:

Juan del Campo made him see then: "Quiet, because you will have another Olympic cycle."

But he replied that he could not say that being an athlete is expensive for him, that only living in Madrid brings him € 500 that he must sometimes ask for at home, that even his cell phone works with the family pack that his parents have hired, I wouldn't know if in four years I could afford it.

He decided that the moment was now.

And in those is Andreu Blanes who discovered that the 3,000 obstacles was an ideal test for him, "Used to work the force in the forests".

Today he knows that what he intends is very difficult, but if he did not try then it would be impossible. And Andreu basically remains the same as 10 years ago he arrived in Madrid to study aeronautical engineering.

The difference is in the time that passed, in which Andreu Blanes learned to take advantage of the worst like that stress fracture in the scaphoid he suffered last year.

He had never suffered such a serious injury. I thought the world could sink and it didn't go like this: It didn't sink.

By then, he had already completed the only two 3,000 obstacle races of his life. The first in 8’52 ”; the second in 8’41 ”. He still has 20 seconds left for the Olympic minimum, "which is a world", but let it be the future, "before thinking that this guy is a freak that is thought to be given away."

I did not think so.

Juan del Campo also let me know that there are arguments to imagine that it is possible.

And in the meantime, he puts all the meat on the grill.

And he is training well (140 km a week). And just down from 29 minutes in 10K. And at a physiological level, he endures some training that he never imagined before.

But, if you have to choose, I prefer to listen to you. People must always be heard. "Emotions are also worth it."

Then, we have the option to think that in the end everything will work out and, if it doesn't work out, it's not the end.

But I don't want to get in there anymore: I've only told the story.