SL20, a very cryptic name but it is not so much if we know its origin, since it is a tribute to SL72, another adidas model. SL72 arrived in the 70s with groundbreaking elements for its time, such as the first adidas that introduced the foam in the midsole. He was seen for the first time massively in the Olympic Games of Munich, although at that time it was only to dazzle at the medal delivery ceremony.

But that is the past. In the present adidas SL20 arrives as a mixed shoe but that can be located as if it were a link between adidas Adizero Boston (the MIXTA par excellence in the German brand) and adidas Adizero Adios, the legendary flying that records world records.

He said that it is the most important in a matter of midsole since adidas introduced the world to Boost technology, for the use now of LightStrike in 100% of the midsole, a radical change not seen in seven years. In this way adidas gives performance to a technology from basketball and is characterized by being very reactive and light (weighs 36% less than Boost!) And, above all, because it gives an alternative to those runners and runners who only They could choose between two options: either you run with Boost ... or you leave the brand. Well, that's not the case anymore, thanks to adidas SL 20. 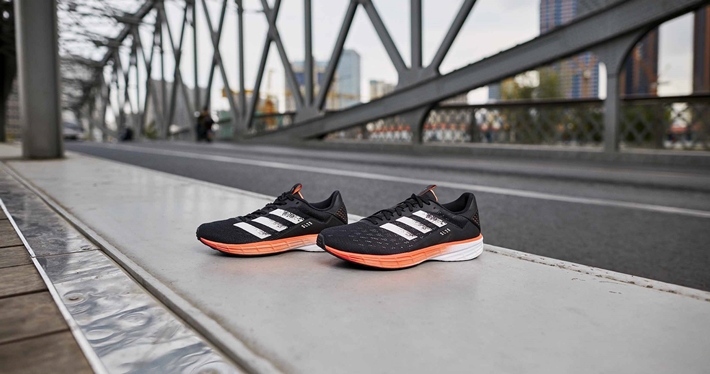 Another interesting fact is weight. Almost to prove me right, its 230gr are right between the mixed Boston (238gr) and the flying Adios (224gr).

Reactive, light, mixed, very-very versatile and versatile ... Many good things on your presentation poster. Let's see what their details are in each part of the shoe. 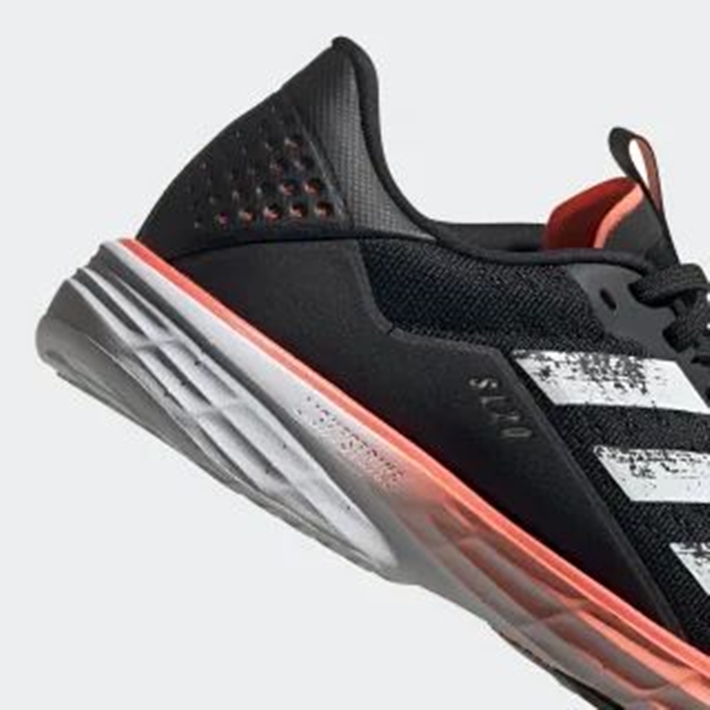 The adidas SL20 midsole is without a doubt the most important part of this model. Being new, everything has to attract attention, but it does so in a special way that 100% of this part of the shoe is built with a compound called LightStrike.

That is to say: there is no Boost. And it is not because it is the beginning of anything, that nobody be deceived. This is because the main properties of LightStrike (reactivity and lightness) go like a finger ring to this model that is thought to go fast with him, both in training and in competition. But, on the other hand, there is a real alternative for those who want and want to wear adidas shoes but, for whatever reason, Boost does not just fit them (yes, although some do not believe it, but they are like meigas : there are, there are… 😉) 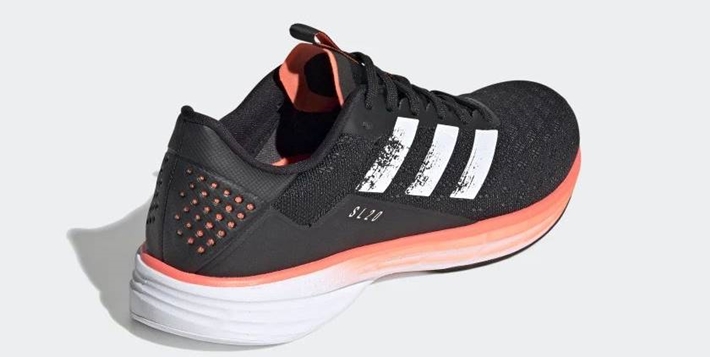 According to adidas, the technology is totally new: It uses LightStrike in 100% of the shoe, but this is not quite like that since LightStrike is a parid compound for basketball shoes, due precisely to its properties in terms of reactivity and lightness . Here what is given is that this material used in shoes that are going to move multidirectionally, here it focuses solely and exclusively on the unidirectional movement that is running and that design is optimized to the maximum to favor the stride.

In April, adidas Adizero PRO arrives in the stores, a bug with a carbon fiber plate that promises to make it difficult for other rival racing shoes. As we already have them, we have been able to analyze them and observe that they also incorporate LightStrike, although there the midsole shares it with Boost. Other models that are coming out of the oven with LightStrike are the latest version of Adizero Takumi Sen and also that of Adizero goodbye. Let's go all the adidas brown beasts ... and that's where the SL20 ear looks out!

LightStrike at the end is a compound based on EVA (ethyl vinyl acetate) whose main virtue, separate damping, is to provide great reactivity and lightness. It does not provide a return of energy at the Boost level (it is quite close) but of course the fact that it weighs 36% less makes it compensate, especially in models where lightness is a value to be taken into account. 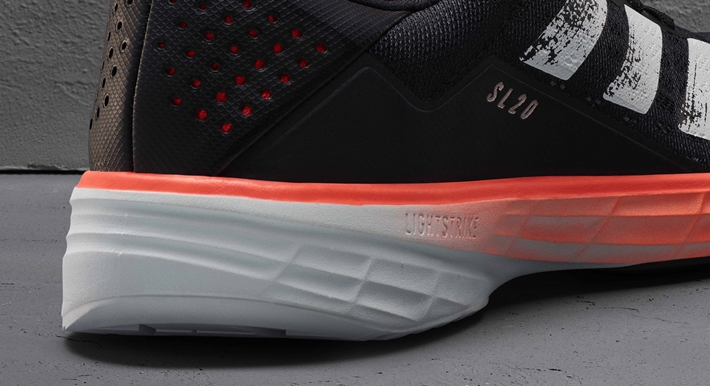 Crowning the midsole is a strip in EVA, called Energy Rail and whose function is to help keep the foot contained in its place, since the level is higher than where the sole of the foot is housed.

The height of the midsole is lower than in Adizero Boston, being 24mm in the heel and 14mm in the forefoot, which gives a fall or 10mm drop. 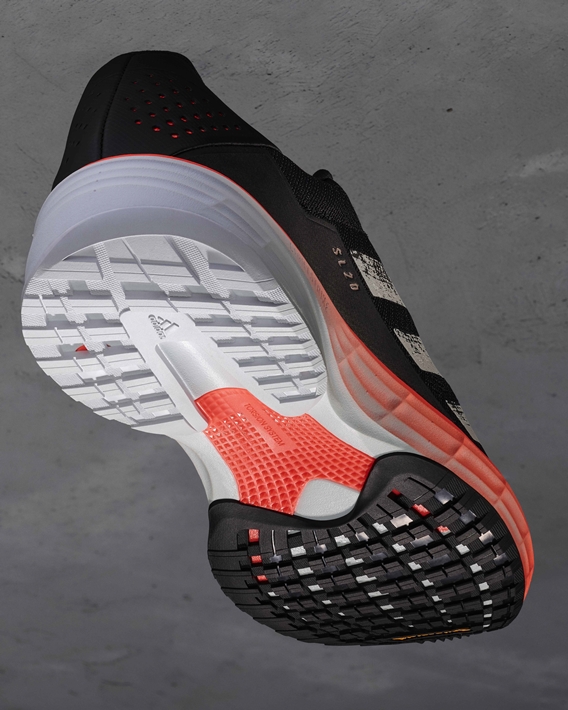 Below, if the shoe is turned, the surprise is to see that the Torsion System is no longer a blunt piece here but rather a thinner and flatter plate. It is logical the evolution if we think that those who use SL20 will not enter heel as much as with other models of training and, therefore, the oscillation of the ankle due to the impact against the ground and subsequent rotation must be smaller.

It is curious to see how Torsion is "textured" in case it comes to touch the ground at some time (for example, overcoming any obstacle or stepping on anything that causes pressure just under the plantar arch). If this piece were smooth, perhaps in that situation it could cause slippage. Very well planned, by designers.

The adidas SL20 sole features the characteristic design of mixed or racing shoes: a completely differentiated front part from the rear. As is well known, the faster it goes, it is usually accompanied by things that are done well, or at least in a more optimized way. Here we talk about the tread and this profile of shoes is usually used by people who run metatarsals (although not always so). In this way, adidas uses two different compounds depending on the part.

On the back, where wear resistance is usually the most demanded feature, Adiwear® material has been inserted. The design of the taqueado goes well for the traction, but his strong one will be without a doubt the resistance against the wear in an area very exposed to the abrasion. 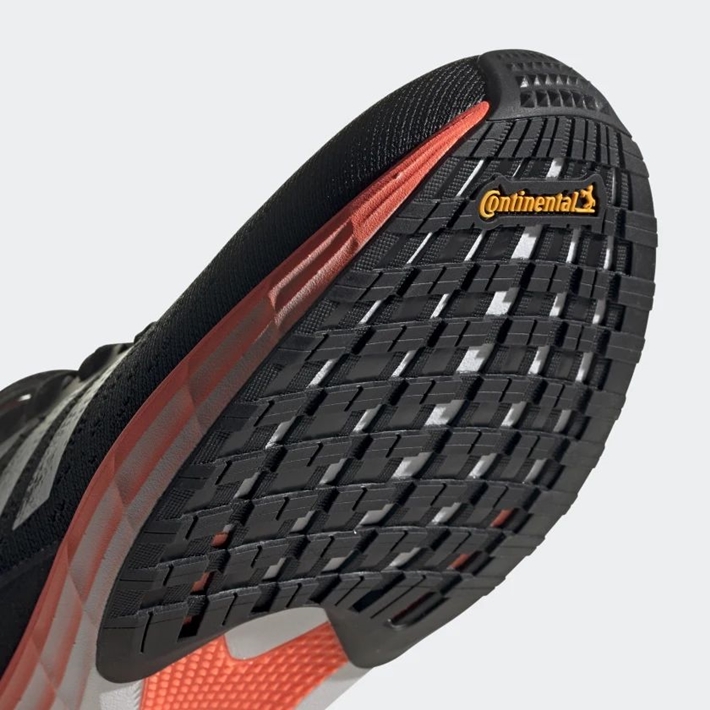 In contrast, in the front the compound used is Continental®. We say the front, but to make it clearer we must specify the entire area of ​​influence of the metatarsals, which is where the pressure is produced when driving forward in pursuit of the next stride. Adhesion is very important here, and Continental® rubber is capable of providing it on both dry and wet surfaces.

At the design level, the SL20 tacking is more or less shared in size throughout the sole of the foot. The separating grooves between the studs themselves, at the transverse level, will facilitate the flexion of the shoe. 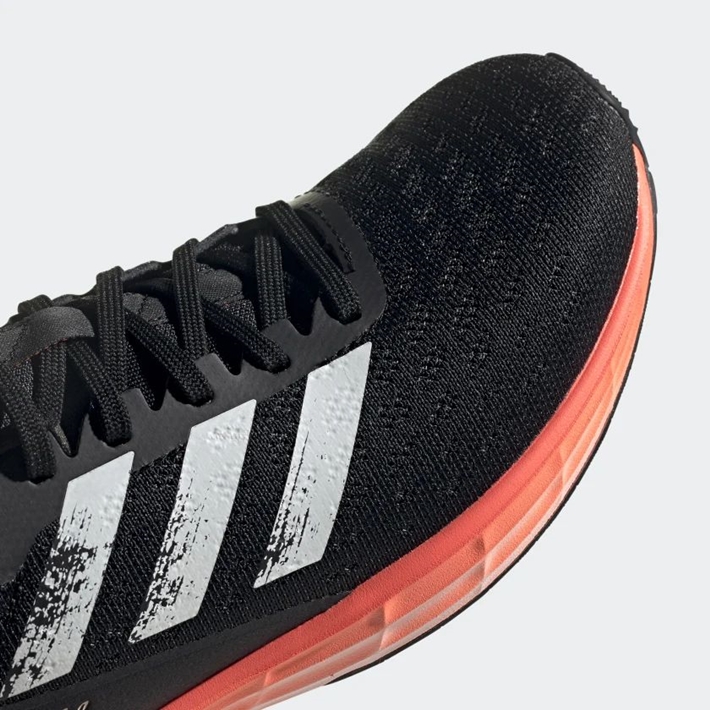 The upper or upper cut of adidas SL20 is characterized by using a two-layer mesh. The outside is very open and perforated to facilitate ventilation. The interior is especially soft because it covers the entire foot (even where it is not seen, where other models save it). This facilitates the work for those who like to run without socks, as it protects against chafing.

The last of SL20 is generous. Here adidas moves away from the usual in this type of shoes (which are tight, even tighten) looking for them to be useful to a wider audience.

Something that has caught my attention has been that lateral reinforcement, with an unusual shape and surface, which is born practically in the Heel Counter and reaches midnight. It turns out that it is also inspired by the SL72 model and seeks, apart from better stabilizing the foot, to make the shoe more recognizable with respect to the adizero range (goodbye, Takumi Sen and PRO).

And if this reinforcement adds material and, therefore, weight, it seems that to compensate the German brand has not added any reinforcement in the form of the three bars of the logo (very popular resource in adidas). What he has done here is to paint them, which weighs less. And if someone thinks it's not cool, because adidas solves it using the Japanese writing as inspiration to paint the three bars ... Let it be clear that you take care of your designs. 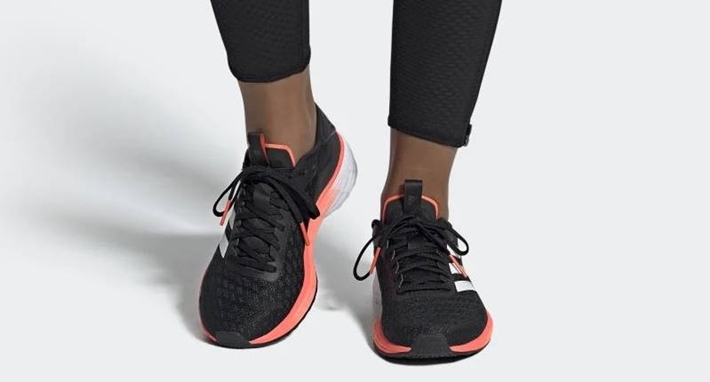 The laces are semi-flat and are passed through five eyelets leaving two more free for anyone who wants to customize the fit.

Inside it also surprises a very thin tongue that is sewn to both sides of SL20 so as not to move. It incorporates a strip to be able to adjust it well once the foot is introduced (and it also has a pin for the laces, come on, that not a millimeter is going to move). Underneath a padded and removable insole will give you extra comfort in use.

Adidas SL20 is a mixed shoe that is close to the competition or flying shoes. It serves both for quality training and for use in racing thanks to its design, lightness and the use of a light and reactive compound in the midsole: LightStrike. 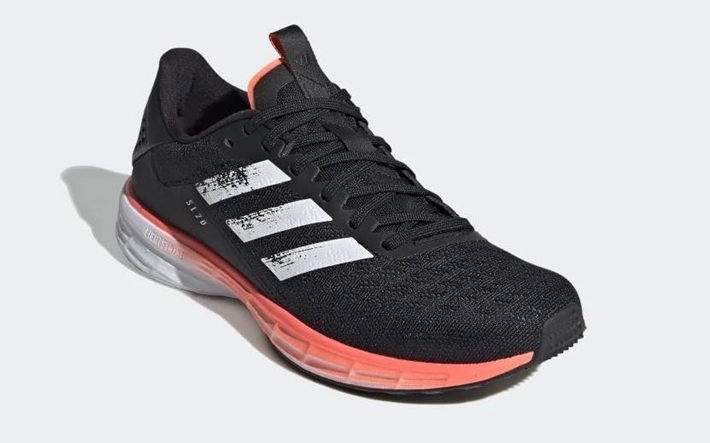 Below incorporates a sole that combines Adiwear® and Continental ™, two rubbers that will work in traction, but improving their performance in terms of durability and adhesion respectively. In the upper, a double mesh is responsible for breathability, lightness and support, but without neglecting the comfort of use.

People who are looking for a model that serves them for the series or fartleks or any other type of “Chicha” training and who from time to time want to take them to compete have a very good option in adidas SL20. Above all, those who want to try something different from Boost (or have already tried it and they are from the -pocos- who do not just fall in love).