I don't know for you. For me, that walking rhythm is almost flying and with this text I intend to share it with you so that you may or may not give me the reason or to test the rhythm at which you have to walk to get off 10 min. the km.

This is an anonymous story and as such I will treat it. His characters will be X and AND, especially X who is the one who did the machado this morning.

AND He is also an unrepentant early riser seven days a week. A man who has drunk the Nile while running, who has broken all records by and by and who, now, two months after turning 65, is injured. The blame is not only on age. Also from the confinement from which he left with a flat tire

But that is not enough to keep him at home. 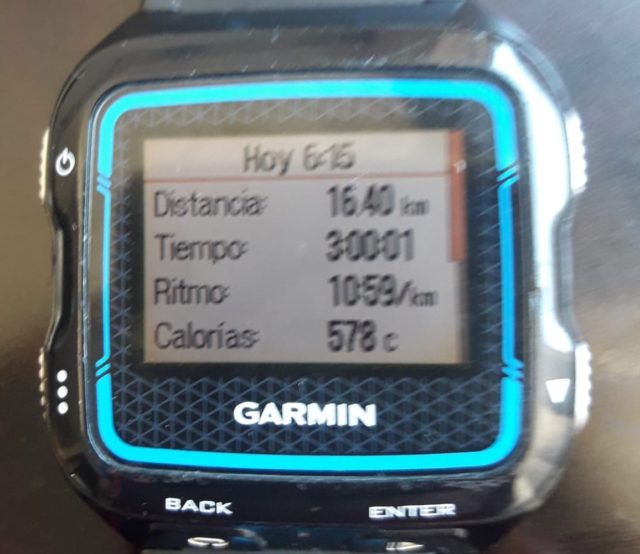 What's this all about? Have I gone crazy?

If I know how to explain what I want to tell you, I think not, that writing one can drive you crazy: it would be like losing the steering wheel controls.

And, in fact, what I intend to tell you is that a good part of the members of that Whattsap group have found it crazy that X At 62 years old, he could do 17.73 km this morning at an average of 7.43 each.

-Your GPS must be wrong.

What's more, the latter was the reason why AND, who defended that idea, placed the photograph of what he did this morning. It had nothing to do with it. His watch found that, in 45 more minutes walking, he had a kilometer less. And honestly, AND He is not a suspicious type of going slowly anywhere.

We are talking about a man who has spent his whole life looking at the clock, marking the passing times.

Finally, me. I'm a guy who doesn't paint anything in this story, but do you know what happened? As I really do not know the rhythms that can walk, I went down this morning to meet them.

Later, I understood that here was a story to tell.

And with this story what I intend is to invite you to the debate among other things because not everything is running. There are also other possibilities and walking is one of them.

What's more, sometimes you are injured and you cannot run but you can walk and it is a fabulous escape valve against inactivity.

There is more to read AND Or listen to those audios of his in that WhatsApp group, where he has become one of the main protagonists, and that has not yet retired: July 31.

After all this, I just need to add that X He is a guy who offers me extreme confidence. He was a brave marathoner who, one day almost 10 years ago, had a heart attack from which he recovered spectacularly: he can no longer exceed 140 beats but I attest that he amortizes them spectacularly when he goes down to train.

Seeing him is health.

A resounding test of discipline when it comes to eating and living. Now, as a precaution against contagions, the latest you go for a run or a walk is at 7 in the morning: not a minute later.

AND it is also a museum item. A guy who, after three hours walking, gets on the elliptical that he has at home and bought it to cushion the effects of confinement: it could not be otherwise in his case.

X and AND they are not alike at all or much alike: anyone knows. At the age of sixty they wear the same pants size as at 18. But surely if something attracted this WhatsApp group, apart from living in the same neighborhood, it was that they are both unable to live without moving.

The clock is already one more part of them, of their life. And sometimes it sparks off spectacular debates like this morning. From here, I invite you to lend us a hand and see for yourselves, among which I imagine that you will have been able to walk below 7.43 / km for 17 km

But I already warn you that it is not easy.