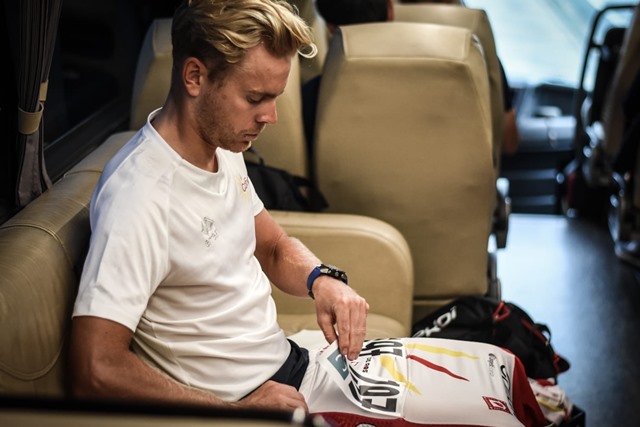 The commercial bicycle “boom” is in stark contrast to the tough and delicate situation many professional cyclists and teams go through.

The precariousness of a sector, which has been repeatedly denounced by its members, seems to have no end and it is that there are more and more economic and financial complications for athletes who are very far from receiving the comforts of other professional sports such as football or basketball.

Salaries negotiated downwards, World Tour contracts more typical of the third division and even cyclists who pay money to a team to run on a certain calendar.

The professional cycling circus is crazier than ever and a good example of this are the last months that our protagonist has lived.

Few readers will probably know the name of Julien VermoteThe Belgian cyclist, despite accumulating 9 seasons on the World Tour, has always been overshadowed by the figure of the undervalued gregarious.

A cyclist who, despite the fact that in the lower categories he was aiming for great things, becoming the Belgian Under-23 champion both for road and time trial, assumed with his arrival to professionalism a “secondary” role as a team rider.

Vermote, who has 4 participations in the Tour de France and 3 in the Tour of Spain, has been here since last January 1 no team, no contract and no job after his last contract with the Cofidis team will expire.

At 31, Vermote finds himself in a totally atypical situation for him. No team wants to take over the services of a cyclist who in his day came to be claimed as a staple signing by himself Mark cavendish.

No structure has been seriously interested in him and it is that on many occasions the teams and sports directors prioritize the winning cyclists in excess, completely forgetting the excellent work that the gregarious do.

Vermote is one of them. One of the best at his job. A cyclist capable of pulling the peloton for kilometers and kilometers with the only, but complicated objective, of keeping track of the day’s break. A true locomotive on the flattest terrain and a born devourer of kilometers.

The former Cofidis rider, recently recognized in an interview with Cyclingnews, that the situation was especially delicate And if things didn’t improve in a rational time frame, he would have to seriously consider giving up cycling.

For now, Vermote continues to prepare for what may come. “I am doing the same as every year and I have to be prepared in case a new opportunity appears”

A Julien Vermote who is, like practically the entirety of the international squad, making a training camp on the Costa Blanca.

However, in his case, things are totally different from how they have been the last 9 years.

The hotel’s buffet, the new equipment, the massages and all the comforts that the teams offer their runners have given way to solitude, an Airbnb room and supermarket food.

Vermote has to pay for the entire Training Camp, and without any imminent income he has to be prudent.

“I came here in December for two weeks, and now I am back with the intention of making another volume block.” “Fortunately, practically every day I find a group of professional cyclists to train with”

The already delicate situation has worsened considerably with the Covid 19 pandemic, and is that some teams like the CCC have disappeared and many others have reduced their staff.

The hotel’s buffet, the new equipment, the massages and all the comforts that the teams offer their runners have given way to solitude, an Airbnb room and supermarket food.

Vermote who claims to feel worry and anxiety about your personal situation, recognizes that motivation is key to overcome these moments.

“At 31 years old, I feel that I can still contribute things to cycling and teams. I feel good physically and I still love cycling ”.

In any case, Vermote is clear that all this is temporary and that, if the situation does not improve, he will soon have to leave professionalism to focus on other things.

A situation that has already suffered from other young and promising cyclists who had to abandon professionalism prematurely for the lack of opportunities and economic solidity.