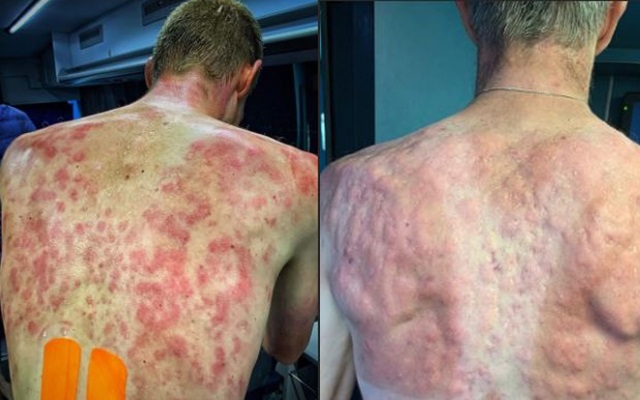 The second stage of the prestigious Critérium de Dauphiné will be remembered for the sporty but also for the extra sporty.

While Primoz Roglic was preparing for the podium after sitting in the chair at the Col de Porte, some squad mates faced a real meteorological catastrophe.

The sky was overcast and one of those epoch-making summer storms dropped.

If last year in the Tour de France the cyclists escaped cheaply from the Tignes downpour, this year many are those who have not been able to overcome the situation.

A true waterspout accompanied by a hailstorm historical that surprised the last riders on the stage. Some runners who, as the images show, were forced to take shelter between trees and the umbrellas of the fans.

One of the worst unemployed was Tim De Clercq. The Deceuninck corridor. Quick Step quickly hung up a "Storie" on his Instagram profile that showed the harshness of the hailstorm.

Riders like Tony Martin arrived, for obvious reasons out of control, but the organization of the race was sympathetic to the situation and tomorrow they will allow them to start the third stage.

Attached I show images that demonstrate the extreme weather conditions.

At one point, the accumulation turned into floods and a guy like @ tonymartin85 had to find a new shelter… Our own @ guyniv1 said: ”It hit me so hard… Never experienced something like that .., just wanted to cross the line and get to the bus… Crazy! " @dauphine pic.twitter.com/21BwHcGvNn

Many Riders - including our boys - were hit by one hell of a hail storm - worst Than anything we expirienced. The scene was total chaos and mayhem. .. riders running for cover, hit hard by icy mini ping pong balls. #CriteriumduDauphine @dauphine pic.twitter.com/Y6XI0PCSRs