It never ceases to amaze us. If a few months ago he dropped the 'bomb' announcing that an asphalt test would be running throughout 2020 (we do not know if he will have reconsidered the decision or will delay it until next year with the coronavirus crisis), now he has shared a session spectacular track training. Residing in Norway for years, where he is settled with his partner, the also ‘trail runner’ Emilie Forsberg, and her daughter, Kilian has found an idyllic space surrounded by mountains, snow and nature. But it seems that he continues with that goal in mind to try something on asphalt or at least it is what gives us a glimpse with the session that took place on the Mandalen athletics track. 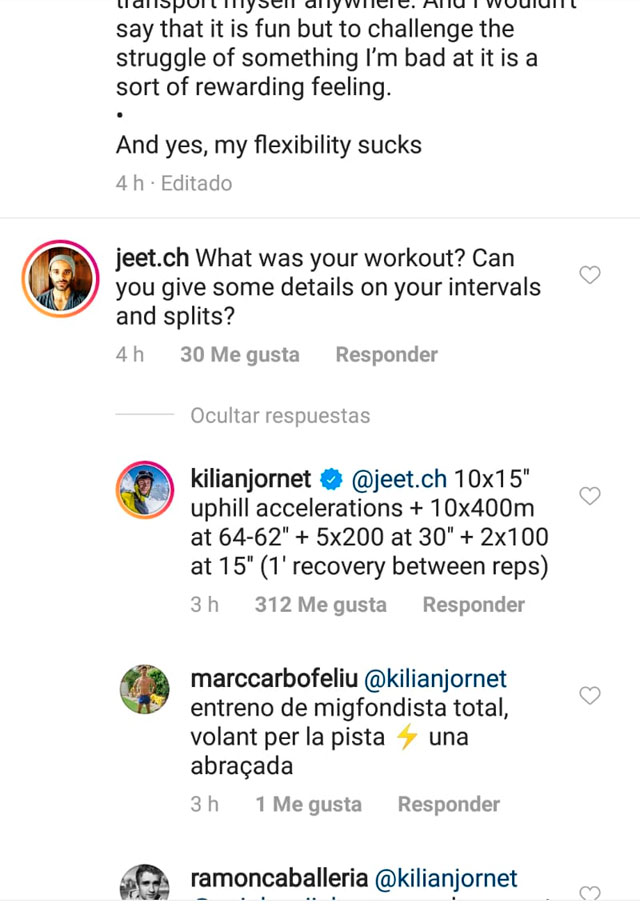 Jornet has posted a video of him training (the track is in an incomparable setting, by the way, and it is all full for him) accompanied by a message in which, precisely, he remembers when not so long ago he assured that he would never run on a test in road / asphalt. “I thought (and I still think) that running for me is a way of moving between mountains, a fun and simple means of transportation for the real goals of mountain activities. But I fell into that "never say never" and here I am not only running flat, but doing it spinning without it taking me anywhere. I wouldn't say it's fun, but the challenge of trying to improve on something I'm not good at is a comforting feeling. "

A follower asked Kilian if he could tell him what the session had been about and there is the best. 10 series of 400 meters at 62 ″ with one minute of recovery, five series of 200 to 30 ″ each and has finished with a 2 × 100 at 15 ″. A real barbarity in the case of a corridor whose habitat is far from the slopes. To start with, these are figures that tell us that it drops well from 15 minutes in the 5,000 meters (below 3 '/ km). Obviously here you have to take into account what this loading week has been doing and other important factors, but if we focus on the session itself his ability to move at these speeds is brutal with the kilometers he carries in his legs.