We have put on a bib again, we've felt that tickle again before the race dayWe have tried to give a little more knowing that that time and those rhythms were going to be listed along with those of thousands and thousands of other runners and that they were going to be part of some rankings. "From this we come out stronger", say many slogans around the world in this context of crisis by the coronavirus. We do not know if stronger, but surely we came out more appreciative of what we had, the simple act of putting on our shoes, tying our laces and going to rattle anywhere.

During these strange months (when they have left us) we have learned to run in any circumstance. Even to do it in corridors and balconies. We have traveled a few kilometers through spaces that we have never tasted before, we have learned to adapt and we have been happy with little. What was once a simple routine is now a luxury. Surely we do not forget it.

Rainbow Virtual Series, the opportunity to see our improvements captured

And in these Rainbow Virtual Series, the circuit created by the Stock Market of the Corridor so that we have again motivations on the horizon and which premiered on May 24 with more than 4,000 'runners' running the 'Green Run', we are going to put in practice these workouts that little by little leave us better sensations and that we want to capture competing on our favorite surfaces. People of up to 40 different nationalities participated in this first test. Within this ‘cosmopolitan’ side of the circuit, it is worth noting the presence of two countries with special notoriety, such as Mexico and Argentina. Two points where running is almost a religion and living 'running' on the surface. Obviously each runner had his limitations, many had to do it from home, others in unusual circumstances. Different determining factors in each territory, but a common objective.

From Mexico the reception to the circuit has been bestial. 510 participants nothing more and nothing less. The Mexican ‘runner’ community has responded overwhelmingly and we wanted to know a little more closely how this return to competition was experienced from the Aztec country. Jorge Ugalde, from the city of Querétaro, tells us that "my city took refuge in voluntary isolation and we have been like this for almost 80 days even though my wife and I have to go out to work every day for obvious reasons. "

On why he started running, Jorge tells us that "I started running for health reasons, morbid obesity grade 2, but thanks to this sport I have managed to drop from almost 130kg to 85kg, but logically my body gave me a bill for almost 39 years of disordered life in terms of food, I am hypertensive, barely diagnosed in October of last year, and now I added the motivation of health to the already many I have to run " .

“Although trail is my thing, those types of races have been canceled to date in my country since March, that is why we are getting into as many virtual races as possible,” he adds.

Argentina, 160 ‘runners’ butt with the cause

From Argentina to 160 ‘runners’ took the plunge and again felt the thrill of donning a bib and competing. There have also been (and still are) strict measures regarding confinement depending on the city and region. We chatted with Adrián Poó, from Buenos Aires, and with Oraldo López, from Don Torcuato (also province of Buenos Aires).

“Very happy, both as a runner and as an organizer, to have this event at this very difficult time for humanity. Since the beginning of the quarantine, with my wife, we have tried to stay active at home by doing exercises with teachers who publish on YouTube and with the bicycle on the reel since I also run on MTB, "confesses Poó, who adds that"When finding the Rainbow Virtual Series, and already being able to go out to train, we do not hesitate to join and although running alone may not have the requirement of massive competition, it has its charm when uploading the registry and being able to see where you are located and worldwide ”.

"At the country level we have very different situations from what they are, capital and large cities, to what is our town, we are 22,000 inhabitants and here, thank God, we do not have positive cases of COVID so we have been able to be certain shape, calmer ”, tells us Adrián. 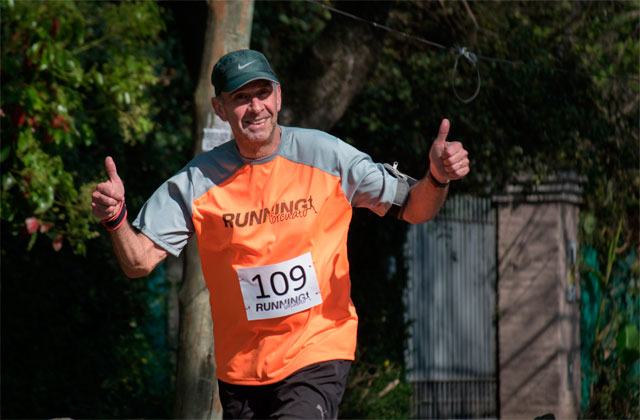 For his part, Oraldo López comments that “when the quarantine began, I did not know what to do until a friend forwarded a news to me from a Japanese who had run inside his apartment and there the light came on, I thought, I have the garden and the entrance of the car, ready, and I put together a circuit, I come and go from the back to the front, I have to make almost 16 laps to complete 1 km and it takes on average 8 min (to think that training I did it at 5:30) but it did not matter , I was able to run and do 5 km in 40 min or so ”.

Oraldo explains how he got to the Rainbow Virtual Series: “On Instagram I saw the initiative of their virtual careers and I said: I want to! And I dared to run 10k that Sunday, what a way to walk around my houseI think 1 hour and 24 min (I put on music and it went much better) so I ended up super happy and now I'm still training and waiting for the next race ”.