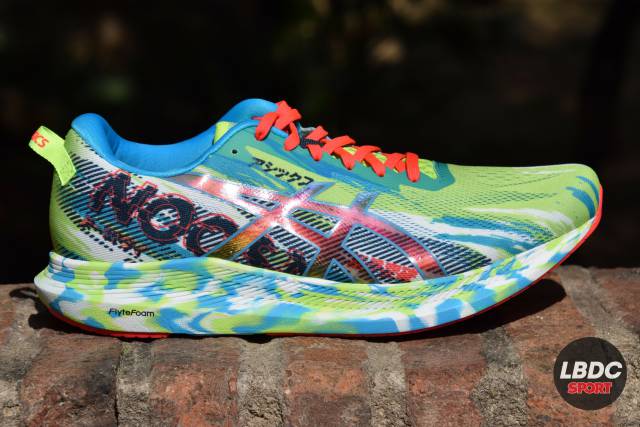 We analyze the triathlon shoe par excellence that is ASICS Noosa TRI 13. This is the last release of this iconic model and that has been leading the best competitions for many seasons on the feet of the best triathletes.

And nobody can say that this shoe has gone unnoticed throughout all these years, already, from “Noosa”. All because from the first moment ASICS decided to give it that colorful and electric look that made it, first, a rare bird among the other models, and later, a genuine image that is the watchword of the “Noosa” saga. 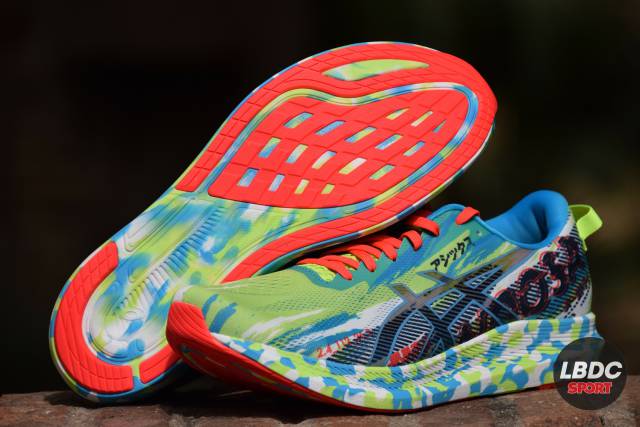 Designed for triathletes, but obviously not focused only on them since, being specific for the section of running, it is many runners who have made it their own. And that’s both for intense training, and to take them to any self-respecting road competition, and also for any distance.

In fact, one of the new technologies that this Noosa TRI 13 incorporates is Guidesole, whose tread management makes it more affordable for a wider range of runners. 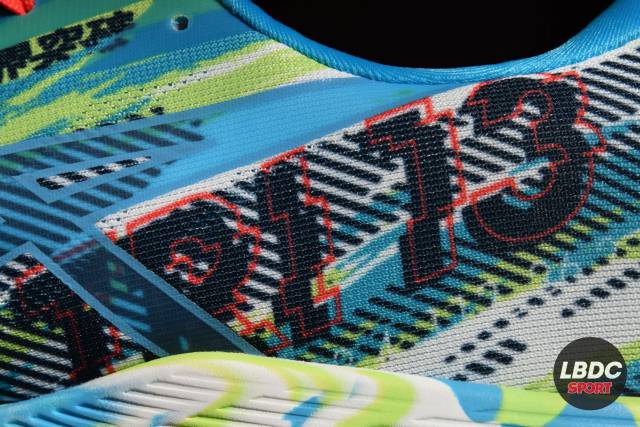 It should also be noted as a novelty something that has to do with ecology and that every time has more weight in the development of running products and that is that the Japanese brand has optimized the production process of the shoe’s print with the idea of ​​being more sustainable in its manufacture.

And another aspect to highlight is undoubtedly the umpteenth weight reduction (and quite a bit) by placing it at just 223gr in the male finish (before 249gr) and 183gr in the female (before 204gr), with which it is clear that Noosa Tri 13 is very, very light. Without a doubt, he is already saying that quality races or training, including test runs and others, are going to be his work environment. But let’s not get ahead of ourselves… let’s go into the details. 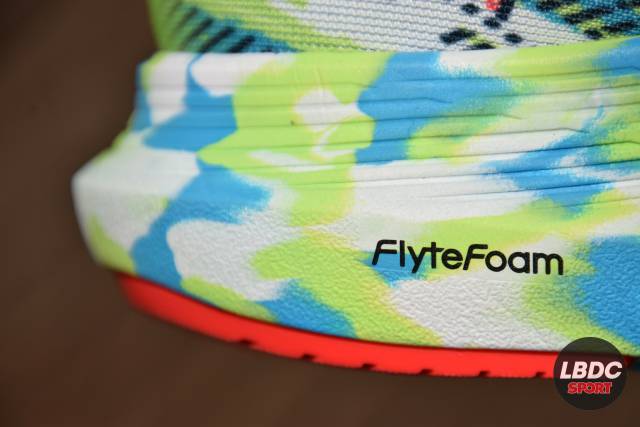 The ASICS Noosa TRI 13 midsole is one of its strengths. It is because of the material used and above all because of the new technology that it includes and that makes it more efficient than all its predecessors.

The compound with which the midsole has been built is FlyteFoam. It has already been a journey time and we have tested it in more models since ASICS incorporates it in most of the technical range (and with different variants of the FlyteFoam itself). This is the case of Gel Nimbus; the “Blast” series: Novablast, Dynablast, also Gel Kayano; the series “Ride”: Metaride, Glideride and Evoride; fast like the Gel-DS Trainer saga or flying like the spectacular Metaracer, among others … 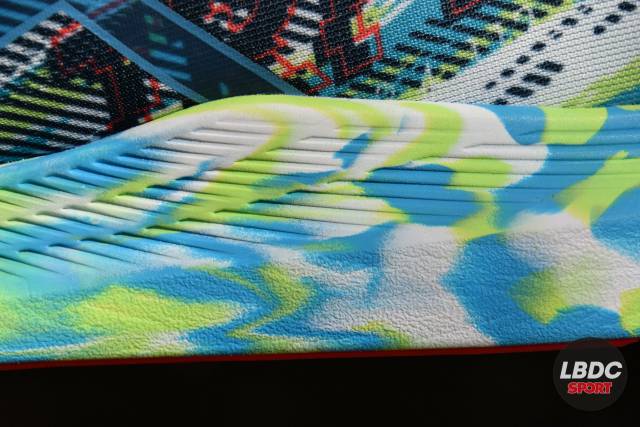 That the cushioning falls into a material called FlyteFoam means that the midsole cushions, but with a high rebound and response capacity. This translates into taking advantage of the energy of hitting the ground and that the material prepares quickly for the next stride …, and so on every time. A differentiating fact is that FlyteFoam uses organic fibers that allow the material to be more elastic than traditional composites and also to be more durable. 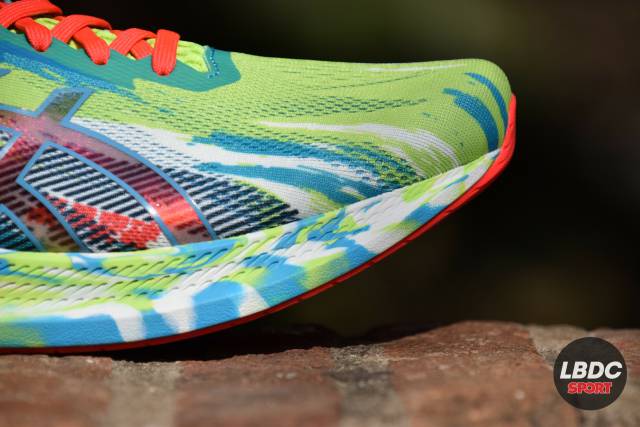 Another technology present in the ASICS Noosa TRI 13 midsole is Guidesole ™ from the Japanese brand. Guidesole ™ is based on a curved outsole and midsole design that encourages running gait and helps minimize the load placed on the legs while running. This curvature not only favors the exit of each stride, but also increases efficiency by reducing ankle movement to a minimum for running. ASICS is supported by different studies that show that those who use this Guidesole ™ technology feel fresher for longer, allowing them to save energy to go further.

The drop is also something to highlight since, in a significant jump, it drops from the traditional 8mm of this model to the current 5mm, the result of this technology that uses the curvature of the sole and midsole. 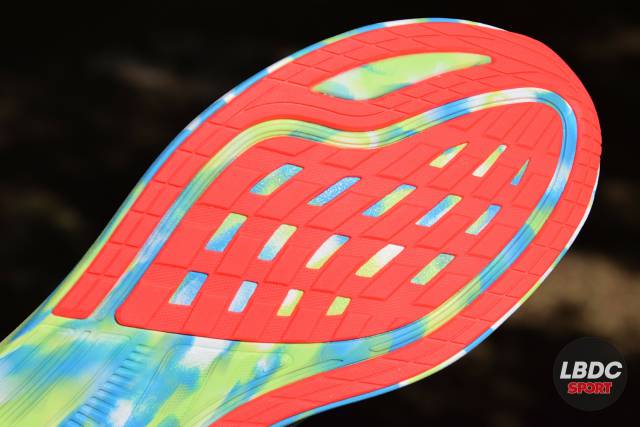 To understand the sole of ASICS Noosa TRI 13, nothing better than to come to explain the midsole since precisely that pronounced curvature of the front part attracts attention. Now it is clear that it is not just unleveling, but that it follows a general idea that accompanies the entire shoe. 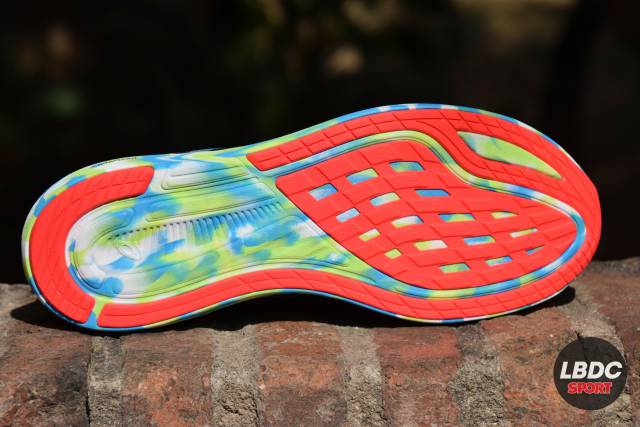 Once the shape is defined, the material must be explained, which is none other than AHAR +. AHAR (ASICS High Abrasion Rubber), is a type of solid rubber compound that ASICS only uses in high-end models. It is a type of rubber to which the Japanese brand adds carbon with the idea that the adhesion properties greatly increase durability. As it is not AHAR, but AHAR +, it must be said that the difference between the two is that the second is more elaborate to increase durability even more.

And it makes sense. Because a shoe with Guidesole ™ technology that aims to make it easier for the runner or runner to travel more kilometers … could not put materials that do not last, or that do not last long. On the contrary, you have to put the compound with the longest durability that ASICS has ever made: AHAR +, to extend its useful life. 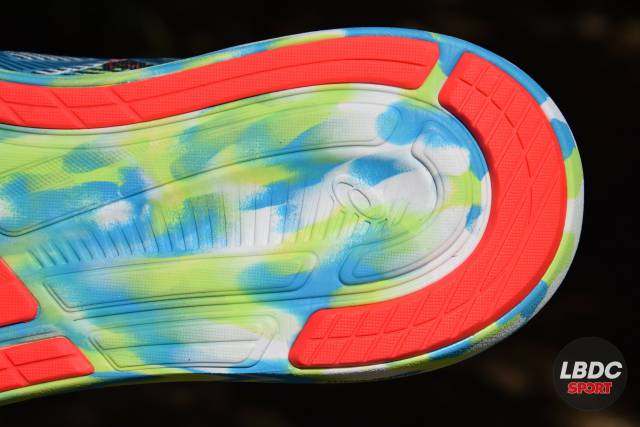 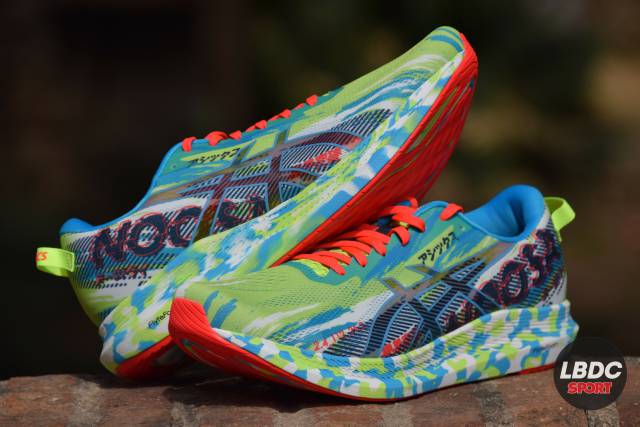 The ASICS Noosa TRI 13 upper follows the characteristic line of the saga: incredible prints, with very striking colors (even in the Noosa TRI finishes with dark colors, such as black). The truth is that the design team for the upper of the Noosa saga must be one of those who work the hardest, because it is something that has given this model a unique personality throughout more than a decade. 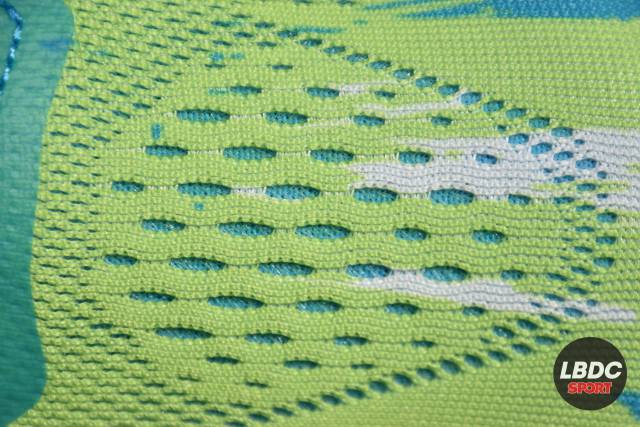 The fact is that it is a one-piece mesh that behind the large and striking patterns hides a whole series of openings to make this shoe one of the most breathable on the market. And it has to be. The time of year and the areas where it is used are usually very hot …, and the management of sweat, when not humidity or directly from the water (also that which runs off the head, at the refreshment stations) is very important . 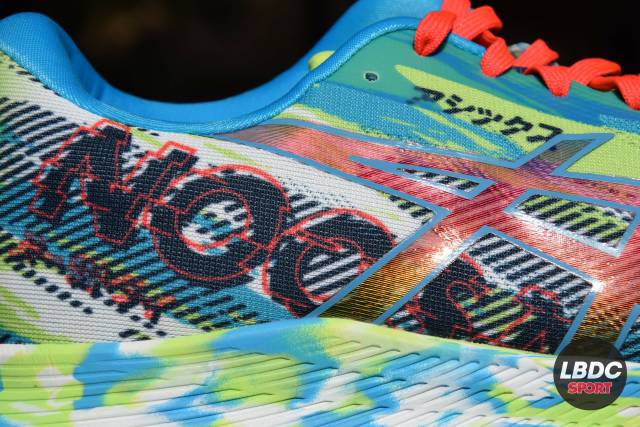 Thus, the toe area and both sides are filled with ventilation holes. The support comes from the hand of the ASICS logo, which is known as Crossed Stripes (or “the paw of the tiger”, which is what it represents). The logo is a PU material that gives consistency to the entire lateral area, which is the one that must firmly hold the foot, especially during the transition of the tread. 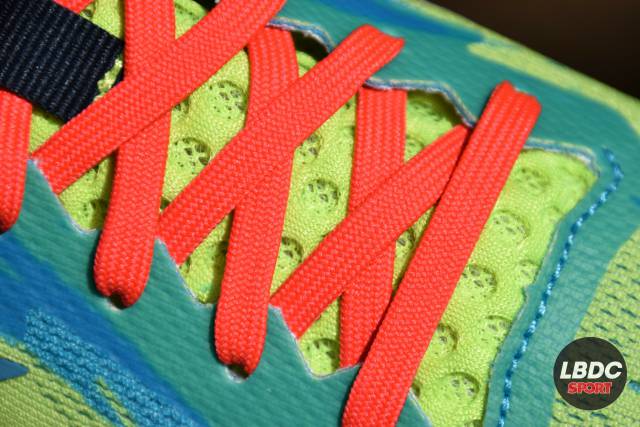 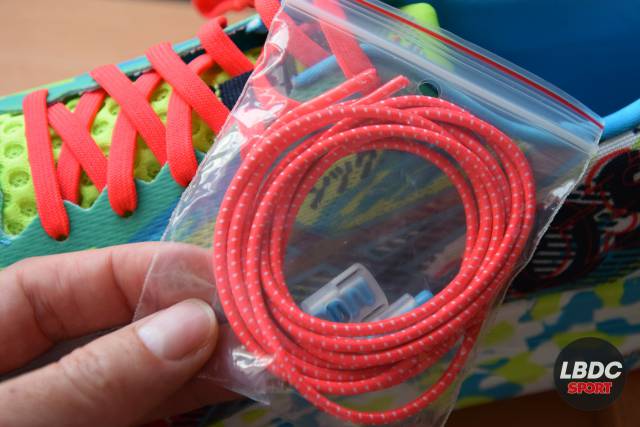 And speaking of laces… ASICS has placed a second pair of laces inside the box for anyone who wants to exchange them. Those that are placed are flat and with the minimum elasticity that laces usually have. On the other hand, the ones that come separately, in a plastic bag, are round, very thin and extraordinarily elastic. They allow you to put on and take off your shoes without touching the lacing … A lacing that is not such, because what these elastics also come as standard are spring pins with which all you have to do is pull the cord, lower the pin and … that’s it: foot insured. 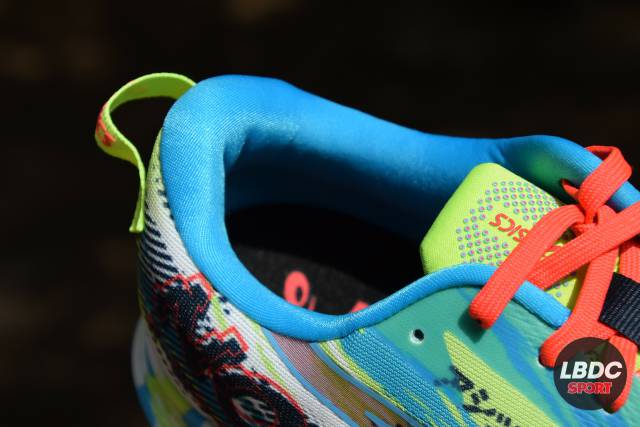 The tongue is also attached to the body of the shoe, so it’s sure not going to shift. And it is there, inside where you can see comfortable elements, such as the fabric of the bowl, which is padded and very soft to the touch, perfect both to go with socks, and to go without them (important). 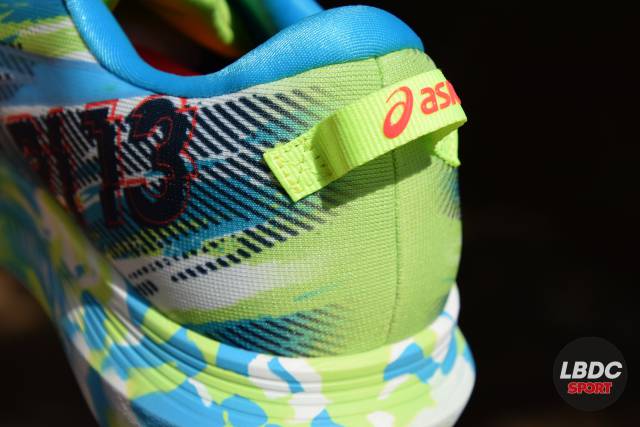 A large strip with the brand’s name protrudes from the heel. If we normally say that these heel straps are useful, in this Noosa TRI 13 we say that they are… indispensable! This is because it is very likely that people who use this shoe will find themselves in situations where fast shoes are essential, for example, those who use it for triathlon (when they are moving from the cycling segment to running). Therefore, putting your foot in, taking advantage of an elastic cord and also being able to pull the heel pin to finish faster are two things that this shoe does more than enough. 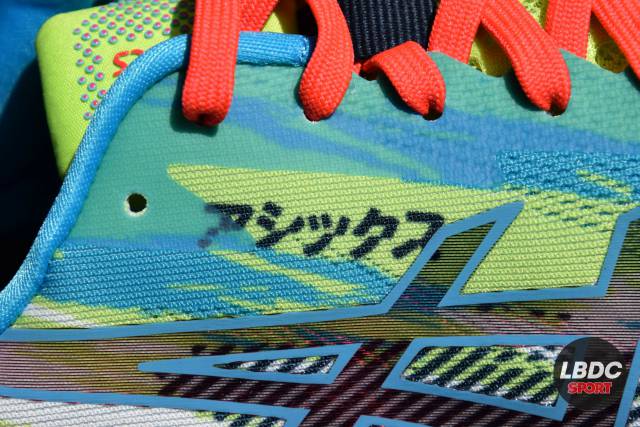 And back to the mesh design. In the stamping there are some numbers and characters in Japanese. The numbers are easy to understand: 2.4 – 112 – 26.2 since they are equivalent to the distances of an Ironman Triathlon, in miles (Anglo-Saxon system). Thus the correspondence would be: 2.4 (3.8Km of swimming), 112 (180Km of cycling) and 26.2 (42Km or marathon). Then there is some legend in Japanese, like the one on the outside of the shoe, which when translated reads: “Do your best”. 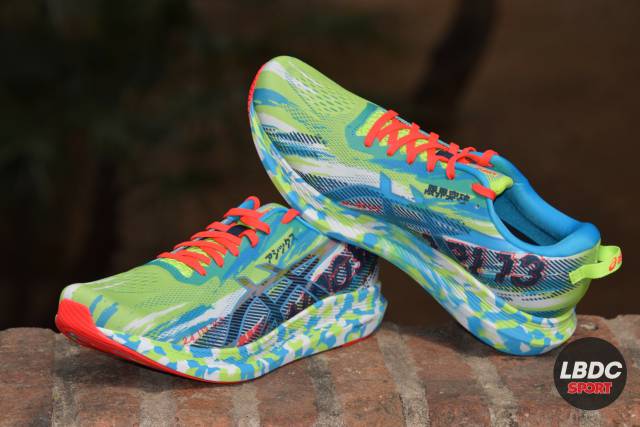 ASICS Noosa TRI 13 confirms once again that it is a shoe designed for fast training and competition. It has a profile that is quite suitable for triathlon but is also used by a very high number of runners who are exclusively dedicated to running.

It is very light since its weight is only 223g in the men’s finish and 183g in the women’s one.

The midsole is made entirely of FlyteFoam material that has now lowered its drop to 5mm. On the sole, ASICS continues to rely on AHAR + rubber, the most durable of this Japanese brand. And we have already seen that, from the top, a mesh that is very light and ventilated will achieve the greatest possible breathability with a high dose of comfort.

A triathlon would be its natural environment, but being for running, due to its characteristics it is an ideal companion for runners who want to use it in races of all distances, including the marathon. In addition, it can also be included in quality training, such as series or where to test the rhythms that will later be carried out in competition.