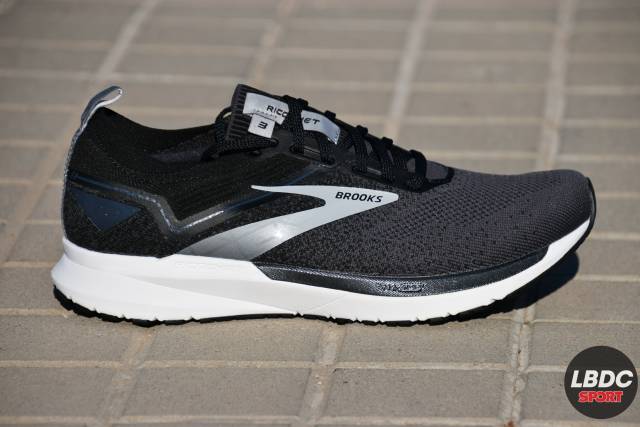 We have the analysis and characteristics of Brooks Ricochet 3, a model that surprised with its emergence a couple of seasons ago among the shoes that seek to go a little further in improving rhythms.

Brooks Ricochet 3 is characterized by belonging to the Energize silo of the American brand. If Brooks groups his models into three types: Cushion (where the most cushioned and comfortable go, fertile territory for daily training shoes), Speed (This is the natural plot of your competition or flying shoes), the third is left, which is where the new Ricochet 3 is included: Energize (This is the terrain of mixed shoes, which are among the most comfortable and cushioned, and those of competition). Therefore, they are shoes that have characteristics that are good for training, such as, at a given moment, taking them to a test. 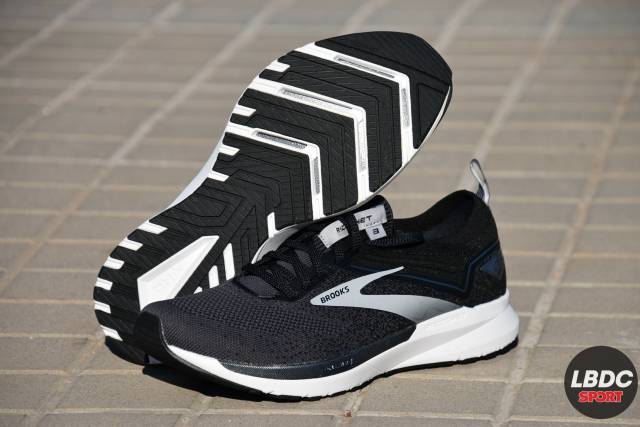 Ricochet 3 has as companions within the silo Energize Levitate 4 and Revel 4 which, like her, are focused on runners with a neutral tread. In any case, if someone is interested in shoes of this profile, there is one more model, Bedlam 4, which is suitable for those who have excessive pronation in the tread.

But this goes from Brooks Ricochet 3, a reactive shoe, but with enough cushioning to crush it in different sessions or distances. For this, it pulls technologies such as DNA AMP in the midsole or 3D Fit Print in the upper.

That it is an agile shoe is certified by its weight, since everything and the cushioning and protections do not reach (or come close to) 300gr: 266gr in the male finish and 238gr in the female. We go more to the cloth of how it is manufactured. 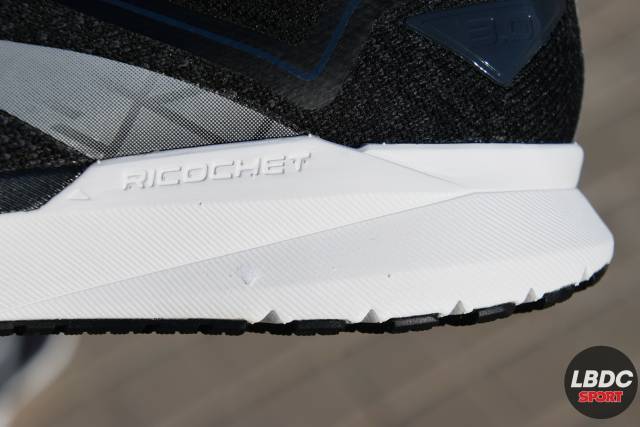 The Brooks Ricochet 3 midsole is one of the most important points of this shoe. As I always indicate, it is in all shoes, but the weighting varies, and here, this is more important. A shoe like Ricochet 3 has to be worth different people, with different objectives … and all perform equally well.

To do this, use a midsole that is good for rolling, as well as for rolling happily, as well as for pulling hard on series days. That’s why Brooks made the midsole out of DNA AMP. DNA is one thing and AMP is the specific DNA variant for this model. Well… actually DNA AMP is made by BASF, in collaboration with Brooks, and was originally included in the Brooks Levitate model. 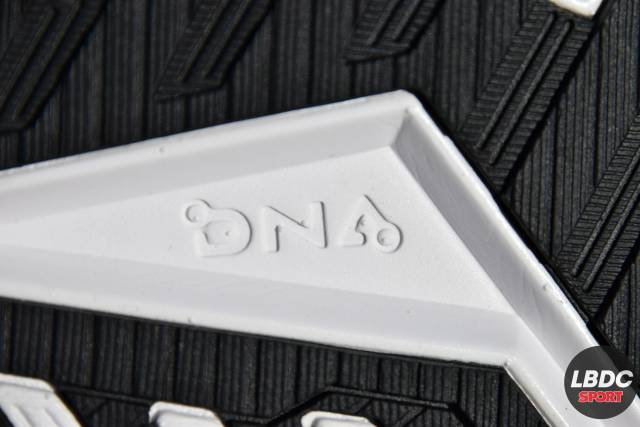 DNA is a polymer that has very good characteristics for the purpose of Ricochet: it is capable of being softer and softer in the damping, the quieter you run; On the other hand, if the rhythm accelerates (and with it the speed at the moment of hitting the ground with each stride), the material responds by becoming firmer and facilitating its response capacity.

The AMP variant (there are others such as LOFT, or FLASH, and even BioMogo DNA, which we see in a moment because it is also present in Ricochet 3), is designed to add an extra reactivity to this buffered material. 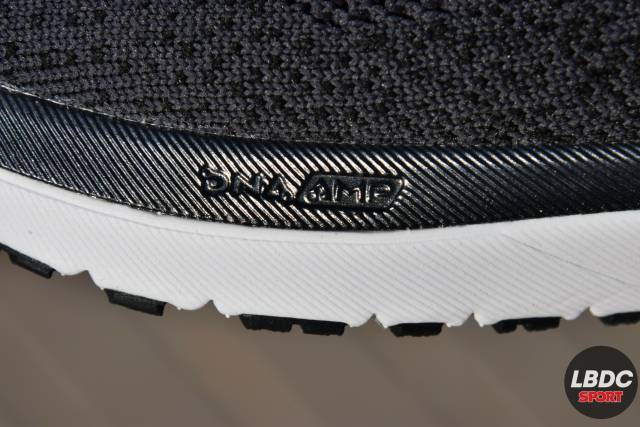 And at the end of it all, DNA AMP (the part with a metallic aspect of the midsole) is a polyurethane with all those properties described but which, in addition, is encapsulated in a kind of “skin” that is a thermoplastic polyurethane that contains it, achieving that the material does not deform excessively when we press it to the maximum every time we fall with all our weight on top. That TPU is the one that has been given the metallic look, visible even if the shoe is turned and seen through the holes in the sole. It gives an idea of ​​how the TPU that surrounds the polyurethane inside is distributed. 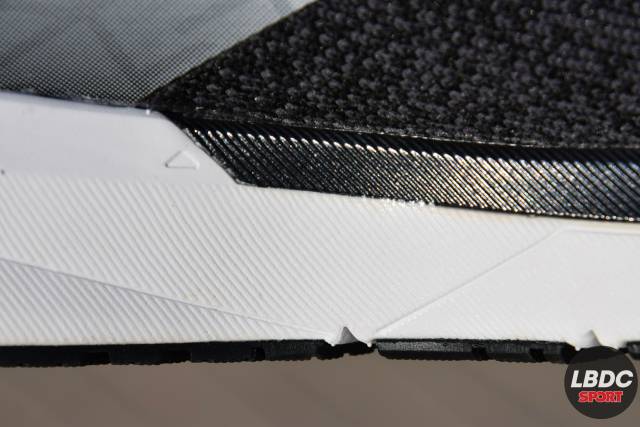 The other material found in the Ricochet 3 midsole is BioMoGo DNA. In fact, it is the one that has the most presence throughout the entire midsole. It is easy to locate as it is the white material in the photos. It has a softer touch and helps to make the impact against the ground in each stride less annoying and damaging. It’s the friendly side of this part of the shoe, leaving the brash DNA AMP to do the “edgy” work.

The drop, that is, the difference in height between the heel (18mm) and the forefoot (10mm), is 8mm, a measure that suits a shoe of these characteristics like a glove. 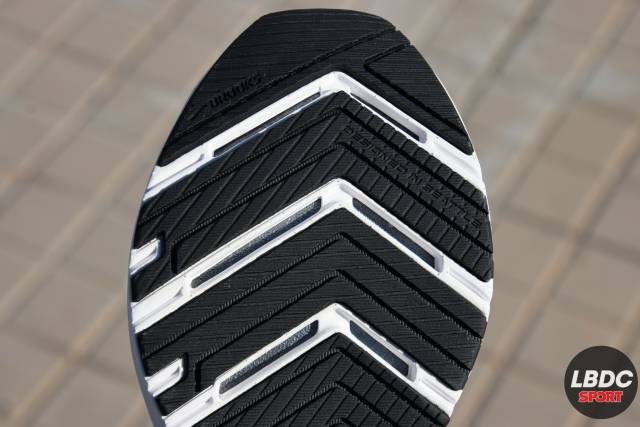 The Brooks Ricochet 3 sole is based on the arrow design that the American manufacturer likes so much. The truth is that it works for them, and not only because it traction well, but because those arrow-shaped strips generate a multitude of bending points that help the tread to be much more fluid than if they did not exist. Fluency and speed, two very useful values ​​for Brooks ricochet.

Earlier I explained that the polyurethane layer can be seen from the sole. I imagine that anyone who does not know it could fall into the error of thinking that it is a plate, like the carbon fiber ones and that are now on everyone’s lips. It is no license plate. Actually yes flexais the shoe, you will see that you will do it without problems, and if you introduce any sharp element that fits, you will see that the material yields without problems (a rigid plate never would). 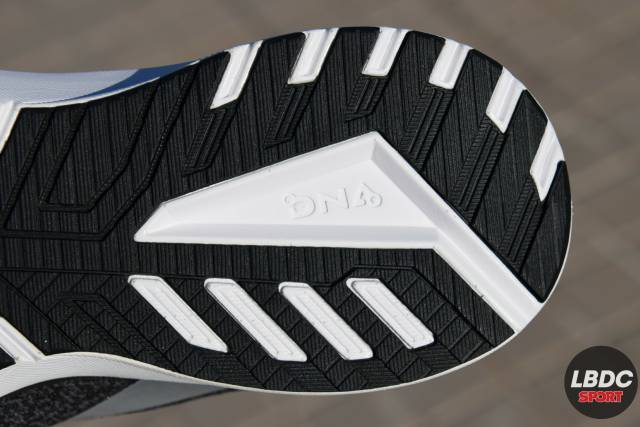 If we move to the heel area we see a horseshoe design that will help to enter all types of heel tread. The fact that it wears a cut is due to the fact that Brooks partially segments the outer face of the heel, which is where the vast majority of runners hit the ground first. In this way, the beginning of the transition is not abrupt.

The rubber with which the sole is made is a type of solid rubber that is neither very hard nor very soft, which precisely allows that versatility and agility of Ricochet 3. The material occupies a large part of the sole, providing a lot of surface supportive, which will help you feel fairly stable. 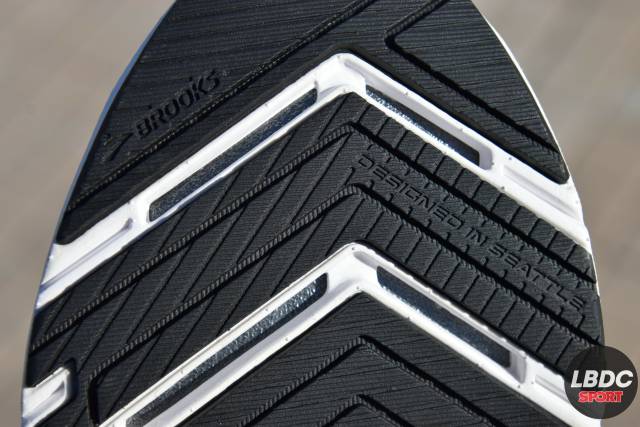 And what the stud does say (it is 3mm deep) is that it is highly optimized for hard surfaces such as asphalt, sidewalks or concrete. Of course, it will go well for parks or dirt tracks in the surroundings, but it is not designed to go further. Come on, whoever needs a well toothed and resistant sole to make the goat, maybe they should be looking at another style of sneakers. 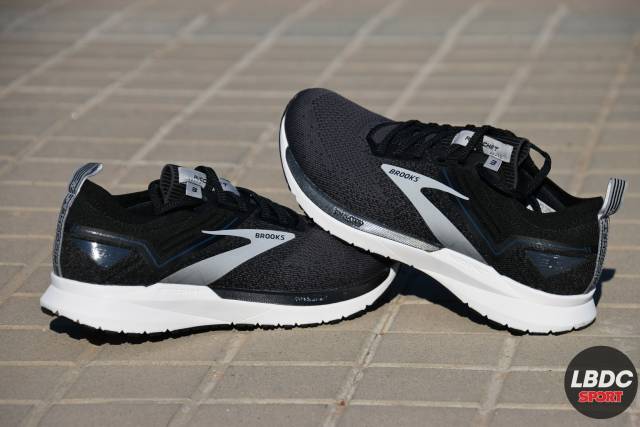 The Brooks Ricochet 3 upper has been renewed by those in Seattle looking to scratch more in terms of fit and breathability. The look is serious, with hyper modern materials and lines, but reminiscent of that sobriety that once characterized Brooks.

Use the Fit Knit system looking for the foot to be well adjusted. It has to be like that, because if one thing stands out, it is the absence of visible and tangible reinforcements… hence the merit of this successful upper that uses a double mesh: the outer one, which is strong and breathable; and the interior, which, like a padded lining, has a soft touch that increases the feeling of comfort. 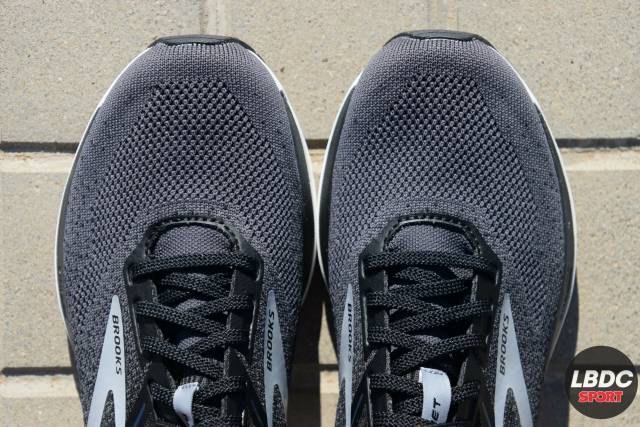 The weave of the fabric is very dense on both sides. This is so, so that the mesh resists the movements of the foot, in all phases of the tread, without more help than the Brooks logo (true, it does not only do decorative functions, it also works). On the other hand, at the front, in the area of ​​the fingers, the weft is so open that no holes are needed as such. This is the most ventilated part of the shoe. 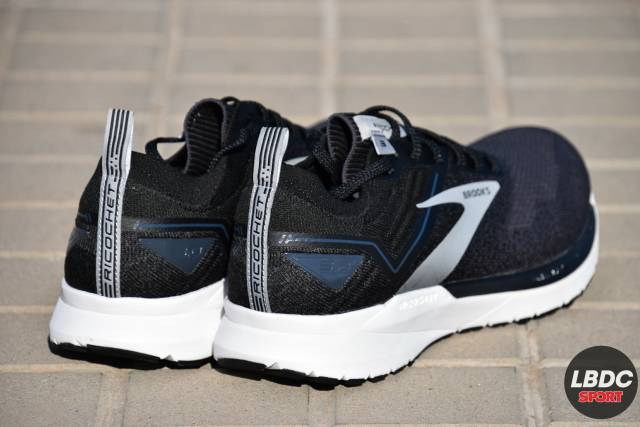 From the midfoot to the back, things change: a strip that starts from almost the center of the eyelet will be the point from where the entire part of the ankle is strongly reinforced. First with that strip and then with some reinforced knitted rows. The foot here will be well supported and protected. This part connects with the buttress of the heel, the maximum responsible for stabilizing it when it hits the ground when running, each of the strides that take us wherever. It is the stiffest part of the shoe. It has to be to help the ankle to withstand the force of each impact and only competition shoes (beware! And only some) have to sacrifice this component trying to be as light as possible. By the way, that at the top we find a strap to help you put on this new Ricochet easily and quickly.

The laces are flat and are passed through a surprising eyelet with six used holes and leaving a seventh free for those who want to close more on the ankle. I say surprising because it is very strong and even has heat-sealed reinforcements so that it resists very high tension from those who squeeze viciously. They could have made it more minimalist, but this is no joke. 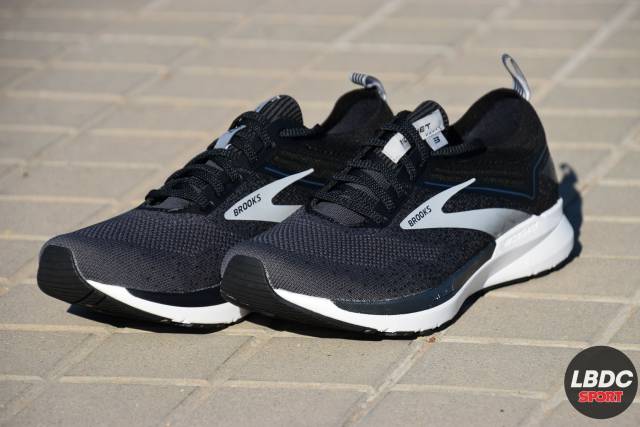 The Ricochet 3 structure is booty type and the tongue, as such, does not exist. It is fully integrated into the upper. It is surprising to see that Brooks passes the laces through a strap, since it is not necessary to hold it (traditional tabs can be moved and tucked through the sides, the latter being very uncomfortable). As part of the body of the shoe, it is only explained if Brooks is trying to reinforce the message that the reed is not going to move.

As is often the case with many cups in ankle boots, it has the highest part made of elastic fabric, so that the foot enters and comes out better. They add this facility because an ankle boot format is never going to open as much as a sneaker with a traditional bowl. Therefore, it is a very suitable resource.

Inside, we must highlight the fillings coinciding with the malleoli. Well, rather, they are designed to fit right into the gap under the malleoli and it is a resource as good as it is scarce. It makes the foot fit well into the shoe and gives a better feeling of fit, that it fits you perfectly.

Brooks Ricochet 3 is a mixed shoe focused on those who are looking for cushioning for frequent use, but also reactivity, since they will not only use it training, but also in races, if necessary.

She is more agile than Levitate, although her tremendous weight loss has brought her closer in that regard. In any case, those 266gr in the male finish and 238gr in the female finish, make, without a doubt, this is a very good option if it is used as a mixed shoe, its natural environment. It can be said that it is a very well cushioned mixed shoe.

It is precisely that great cushioning, thanks to DNA AMP that allows this to be a shoe for multiple distances, and that it can be used by both runners (with neutral tread or insoles) who are both beginners, as well as those who squeeze it frequently. . Its 8mm drop is more than indicated.

The rhythms to take it (having shoes for quiet filming, such as Glycerin, within Brooks itself), could be said to be better if they are ambitious, either because it is used in progressions, or farleks, or fractional training (such as the series), or because the race always seeks to go further. Seeing her in feet that squeeze her and that, who can of course, take her to rhythms that are close to 4 ‘per thousand, and even a little less than that, should not be surprising.

And then there is that, combining it with some daily training shoes, like those Glycerin that I mention and leaving the intense days for this Ricochet 3 would be a winning combination, without a doubt.

The official Brooks Ricochet price is € 140.