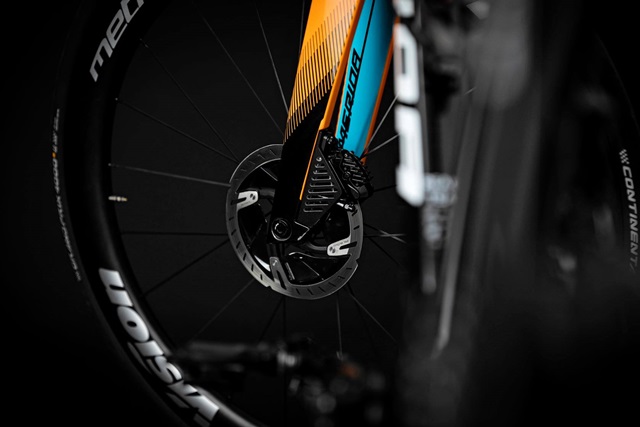 The first stages of the 2020 Tour de France have served to see the best cyclists in the world in action but also to corroborate what was an open secret. The disc brakes they still have a lot of room for improvement.

An eventful first stage was enough to put the eternal debate back on the table. ¿Are disc brakes or shoe brakes better?

The Tour de France is the best commercial showcase for brands that want to give visibility to their products. The best material is present every year and before such an opportunity it is normal that they appear from time to time reliability issues.

Many brands take advantage of the gala round to present their newest products in society and this obviously has an associated risk.

The case of disc brakes is for me an illustrative example that rushing is bad advice.

By this I do not mean that disc brakes are bad. In fact, on more than one occasion I have already expressed my opinion on the matter. The truth is that the myriad advantages of the disc brake make me glimpse a horizon in which traditional shoe brakes will have hardly any space.

What I mean in the previous sentence is that in the best race in the world the teams should take always the best material. This implies mounting the lightest, most reliable, most comfortable and obviously the safest material.

As we could see in the punctures and falls of the first stage, today disc brakes are still far from having all these attributes.

We could see more than one rider annoyed with the slowness of the wheel change. Julian Alaphillippe himself opted to change directly between bikes in view of his mechanic's difficulty in removing the rear wheel. Not to mention the serious accident that the Swiss Simon Pellaud had after running out of disc brakes in the middle of the descent.

Beyond the respectable opinion that everyone may have about disc brakes, it is an objective and unquestionable fact that discs continue to present more problems than shoe brakes.

So if you have a more reliable and lighter option because the teams keep riding and even forcing riders to race disc? The response is very clear. Bicycle brands have a huge commercial interest behind disc brakes.

Obviously all professional sports have business interests behind each event. But very few are those who put the sale of products before the technicality or quality of the products. Can you imagine a rally driver competing with rough tires simply because a certain brand is interested in selling rough tires in the imminent arrival of winter? Or a swimmer competing in a bikini to favor a certain campaign?

Riders are starting to look like mannequins, and disc brakes are just the clearest example of this whole circus. According to rumors in the networks Movistar cyclists are extremely unhappy with the Sram group and they even considered the possibility of riding last year's Campagnolo for the Tour de France. Obviously the commercial contract prevented it.

Although it may seem like an extremely destructive post towards disc brakes, I can assure you that I have nothing against them. I am simply asking that they come when they have to. When they are more reliable, more comfortable and more secure. A professional is not a cyclist who can allow himself to stop for 2 minutes to remove the wheel.

More than half the peloton are racing with disc brakes and fortunately most of them do so without any problem.

However, it seems that bike brands and disc brakes will have to wait another year to succeed in the Tour de France. Egan Bernal, Primoz Roglic and Tom Dumoulin, the top three favorites to win the final win compete without a disc.