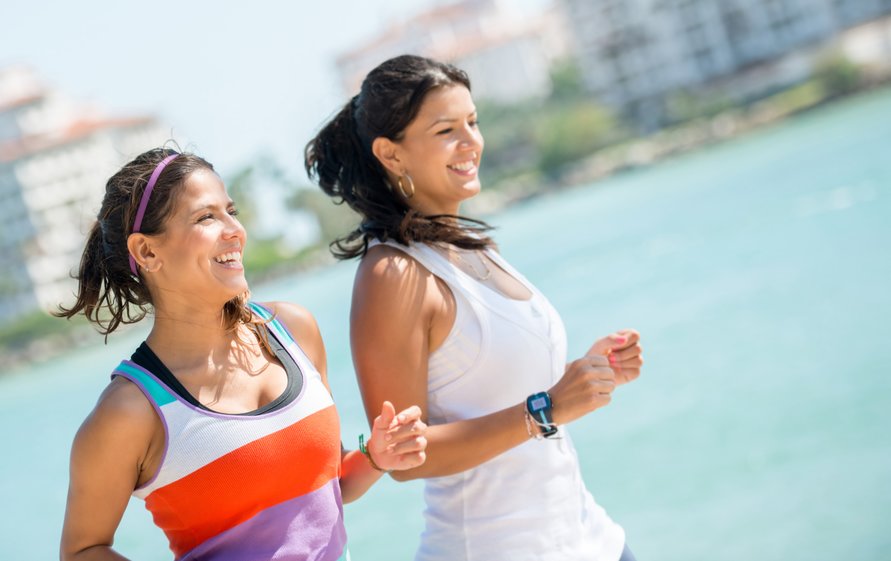 He running It is one of the most practiced sports in Spain. The running fever is explained by several reasons, but it mainly highlights the ease of carrying it out on any occasion, The economic nature of this sport and the physical and mental benefits it offers.

In addition to this, it is a sport with a strong social component, because every week popular races of all kinds are organized, some of them with a strong solidarity content that are very well received in the cities.

However, there are areas of the body that can be negatively affected by the practice of this physical activity, and one of them is the pelvic floor. Women who do sports usually have a more toned pelvic floor than sedentary women but, the pelvic floor, being in the lower abdomen, is the structure that receives all the pressure that causes the impact of the body against the ground when running.

Unlike other aerobic activities such as swimming, cycling or elliptical training in the gym, Running can lead to certain conditions on the pelvic floor.

What is the pelvic floor and how does running affect this muscular joint?

The pelvic floor is the set of muscles that act as the basis for all viscera of the abdominal cavity. This area integrates muscles located in the lower area of ​​the pelvis and supports organs such as the urethra, uterus and intestines.

In the body of women, when there is a genital prolapse The bladder or rectum falls on the vaginal wall and the uterus descends, occupying the vagina and even sticking the cervix through the vulva in the most severe cases. It is estimated that approximately 11% of women suffer problems of this type throughout their lives.

And although prolapse problems are more frequent in women, because they occur as a result of pregnancy and childbirth on many occasions, men's pelvic floor may also weaken due to factors like echronic constipation, surgery, pelvic radiotherapy, neurological diseases or infectious disorders of the prostate or urethra.

When running, women and men, add to the weight of gravity, the impact of strides. If this is added that physical activity is performed without good shoes that cushion the blow and without having developed a good running technique, the options of weakening the pelvic floor increase.

Some poorly designed workouts or running in an uncontrolled manner and with poor equipment For this sport you can get the pelvic floor to become fragile, unable to guarantee the functions of supporting organs and urinary and fecal continence.

How to prevent running weaken the pelvic area muscles?

In order not to suffer these problems derived from the impact of strides during running it is important to attend to several factors. First, know in advance the state of the pelvic floor and core muscles, after this, gradually acquire a good career technique, run only the distance for which it is prepared, because overexertion can have consequences both at the pelvic level (in the long term) and at other levels.

Two last factors to consider are weight and age, to estimate how far or how long you can exercise, and the area where it runs, as surfaces such as asphalt or the bike lane are not recommended if you suffer from pelvic floor problems.

Once the problem of running and pelvic floor is known and recommendations to prevent these problems from going further, it is time to indicate some practical advice during physical exercise, so that it is not necessary to stop practicing this physical activity.

Weight, as we have already said, is important. With a high level of overweight, the running sessions can be dangerous if they are exclusive, so it is advisable combine walking sessions with small running distances and strength workouts.

At this point it is important to activate a specific pelvic floor strengthening program as described in this video tutorial.

Another factor to consider is the distance of the race. Long distances are the great enemies of the pelvic floor, especially if they suffer problems in this body area. Again, the recommendation goes through combine running sessions with more moderate activities such as walking.

The third element to watch is the terrain. The harder the firm, the more problems can occur, because the damping on the ground after the stride is less. In this sense, it is advisable to run on grass, dirt or sand, or do it on sports courts, but not on asphalt or bike lanes.

Very related to this point is that of sports equipment. Good running shoes help greatly to reduce these problems., especially if in addition to this, a Good career technique.

Tread tests, although greatly overrated, can help you know better how to practice running. In any case, if you want to know in depth the incidence that running, tread and general physical activity can have on the organism, it is interesting go to a specialized medical center or at least a podiatrist for a biomechanical study, where the state of hips, knees, ankles, feet, pelvis and lower trunk are evaluated.

There are also tricks during the race that help generate less impact on the pelvic floor, one of the best known is to increase the stride rate, up to 180 per minute (90 with each leg). Short and fast strides imply a better career technique.

The kegel exercises, which are not normally associated with running, but with problems arising from pregnancy and childbirth and whose objective is recover pelvic floor muscle tone After this period, they are also recommended if during the race training if you suffer discomfort in this area. Likewise, the Hipopressive abs They achieve a toning of the deep abdominal muscles and the perineum.

In this line, running should not be an isolated activity, before starting to run it is necessary to perform stretching exercises and adequate heating, to avoid injuries, just like when the activity ends. But in addition to this, and pursuing the goal that the pelvic floor is not affected by the practice of running, train the core (the muscles of the abdomen) and performing strength exercises helps to gain muscle tone and endurance.

Intensifying the muscles of the abdomen is important for improve balance while running or doing any other physical activity, to get a healthier back, to develop healthier legs and to obtain better postures, both performing physical activity and day to day.