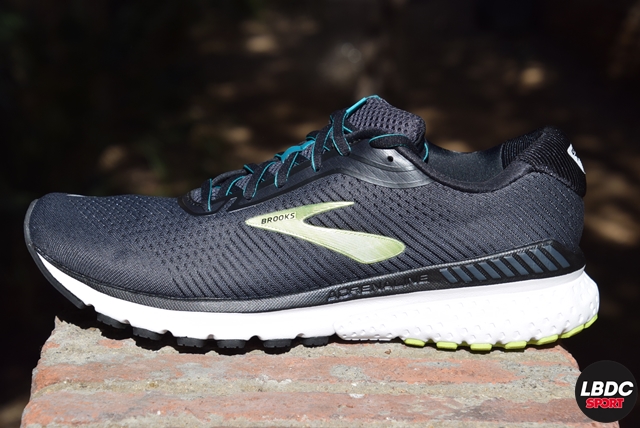 Analysis and characteristics of Brooks Adrenaline GTS 20, the most recognized and longest running pronation control shoe of the American brand. Adrenaline GTS reaches the twentieth relay being a compendium of technologies and materials at the service of a comfortable and protected race to be able to accumulate kilometers without problems, be it intrasession, multiple trainings, or even races, where distance or the search for a rolling nice to the finish line is a priority.

Although Adrenaline GTS has evolved a lot from its origins, in this twentieth installment the variations from its predecessor are nuances to polish a finish that is very successful. Thus, based on a continuous midsole and sole, although not identical since they differ somewhat from the GTS 19, we see appreciable differences in reducing the weight from 312g in men and 272g in women from Adrenaline GTS 19 to 300g and 266g respectively.

Brooks continues to put the same batteries of recent years where it has managed to take a leap forward in terms of technologies and also in designs. Everything since in 2001 this centennial brand made the crucial decision to focus solely and exclusively on athletics in all its forms. Even so, it has not been until recent years that he has turned all his designs around.

Adrenaline GTS was born in 1994 and celebrates its twentieth edition leaving the first finish very far, although not its philosophy of training shoe for runners and runners with excessive pronation in the tread. Currently with GuideRails® as a star element in the midsole and retiring to high-density materials ... Now it's time to see the details of the newest in the franchise. 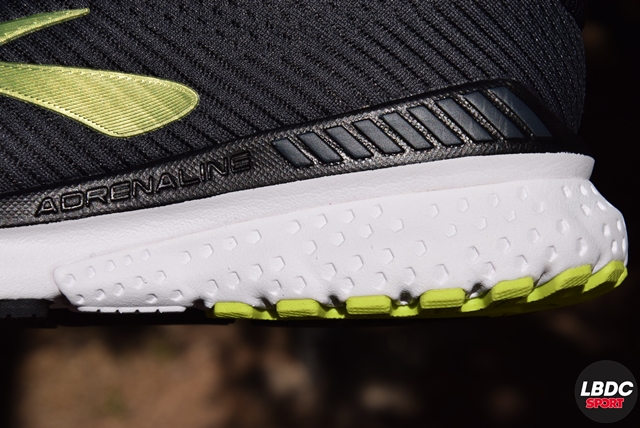 The Brooks Adrenaline GTS 20 midsole incorporates a whole battery of technologies and materials to achieve one of its best shoes in terms of cushioning and stability. This makes it ideal for those who pronounce excessively during the tread.

I explain first the materials, which are various and combined, and then GuideRails, ultimately responsible for control.

DNA LOFT and BioMoGo DNA are the mixtures of compounds, which Brooks puts in the shaker of essences to build the midsole. The distribution is this: Above, along the entire length of the shoe is the BioMoGO DNA material (smooth profile). Underneath, although only on the rear half of the midsole, is the DNA LOFT material, recognizable by the pentagonal notches that can be seen on the sides. 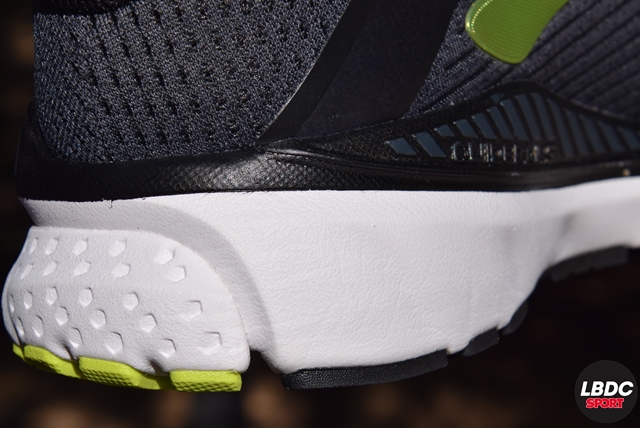 With DNA, Brooks achieves a material capable of providing cushioning that adapts to the type of race and even to the footprint of the runner. The way it does it is thanks to a non-Newtonian material capable of responding differently if it goes faster or slower, that is, if it impacts with more virulence, or not, or if the person who wears it weighs more or less. Thus, if it is slow, the material responds by cushioning more smoothly and progressively, while if it accelerates, it becomes firmer. The LOFT variant is an evolution of the original DNA, making it even more padded and light for soft cushioning.

BioMoGo DNA is the union of the original adaptive DNA polymer (by weight, rhythm, style, ...) with BioMoGO, an equally surprising compound. BioMoGO cushions with great durability, but stands out for its ecological commitment: inside it houses a non-harmful natural component that, in the event that the shoe ends up in a landfill, and only in that case, the material would self-destruct fifty times more faster than a conventional midsole. 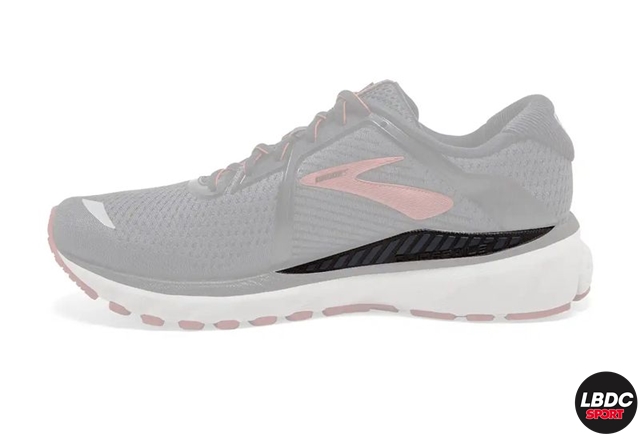 Well, having seen the materials, it's time to explain GuideRails, Brooks' flagship stability control technology. Based on the correct alignment of the ankle-knee-hip axis, a contour that rises above the midsole is visible on both sides of the shoe, in black in the photos. Its function is to contain the foot while directing it during the transition of the footprint, controlling that the proper movement of those who have to deal with excessive pronation does not occur. 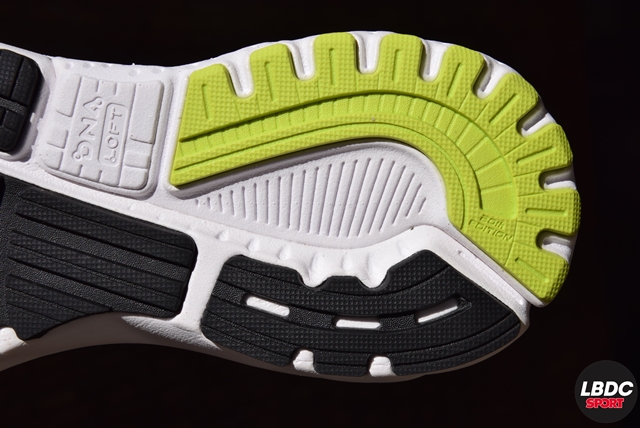 And to absorb the great impact that hits the ground when contacting with each stride, it exists in Adrenaline GTS 20 Segmented Crash Pad. Here it is easier to see if the shoe is turned and viewed from the sole, to locate it see how it complements the midsole. From the sole it is the green material in the photos that defines that area in charge of taking the first blow against the ground at each step. Seeing the continuation it is clear that it is precisely DNA LOFT that takes all the work to appease that great impact.

This group model Cushion Brooks (like Ghost or Transcend, among others), and designed for runners and runners with an overpronating footprint, it has a drop of 12mm. 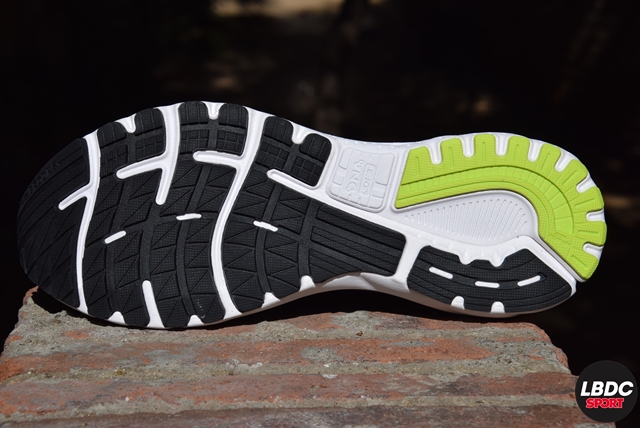 Brooks Adrenaline GTS 20 outsole retains the general design of its predecessor, and only incorporates nuances to scratch a gram or improve flexibility. The rest is the same structure that is giving such good performance in these last editions.

Thus, a horseshoe-shaped heel is observed that will facilitate entry for all types of runners. On the other hand, on the other hand, a large base with fairly flat lining (asphalt shoe, asphalt) allows a large contact surface that favors good traction and a good base to distribute the pressure of the tread. 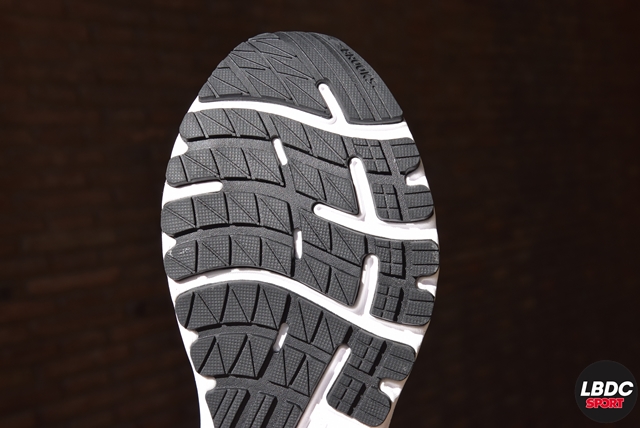 This front part is furrowed by a longitudinal line that helps the transition of the tread and up to four transverse strips that improve the flexibility of rubber, the most rigid material normally of a shoe.

Some areas of the sole are now perforated to, as I said before, subtract a few grams and help it flex better.

The most resistant rubber is found in the "horseshoe", the area of ​​maximum wear. That the green area, in the photos, is not linked to the rest is part of the design of the Segmented Crash Pad, since separating it means that, when it hits the ground and starts the transition, this step is not abrupt. The upper of Brooks Adrenaline GTS 20 is in keeping with being part of the star shoe in terms of pronation control for this American brand. Now it has been devoid of the reinforcements in TPU to 360º of the version 19 and everything trusts a mesh that is only forcefully reinforced by the inner side of the ankle, that is ... the one that interests.

Because when a foot has a tendency to overpronate, that excess rotation leads it to sink down the internal face. Here Guide Rails does its job, but the upper comes to its aid with internal reinforcements that go down from the laces towards the mid area and down to the heel. 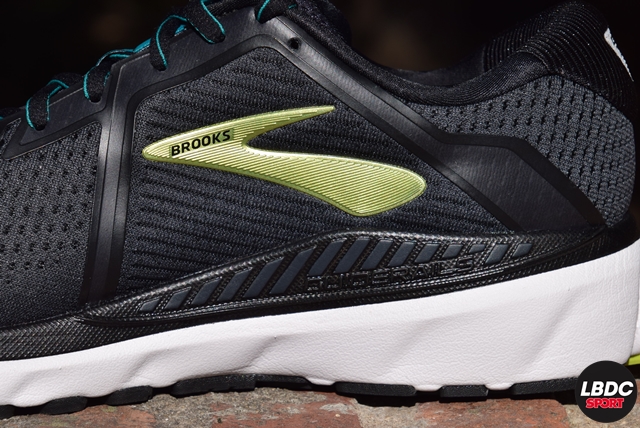 Come on, if he said in the midsole that there was a team approach in all the intervenors in the cushioning, the upper joins that team to achieve a cushioned and supported footprint. It is an engineered mesh that uses Brooks' own 3D Fit Print. This improved mesh structure also contributes to maintaining a low weight of the shoe, since the elimination of reinforcements on the external face gives this weight saving.

Another advantage of this system is that there is more open mesh for more surface of the shoe, with which it is already seen that the breathability is greater in this new installment of Adrenaline GTS 20. 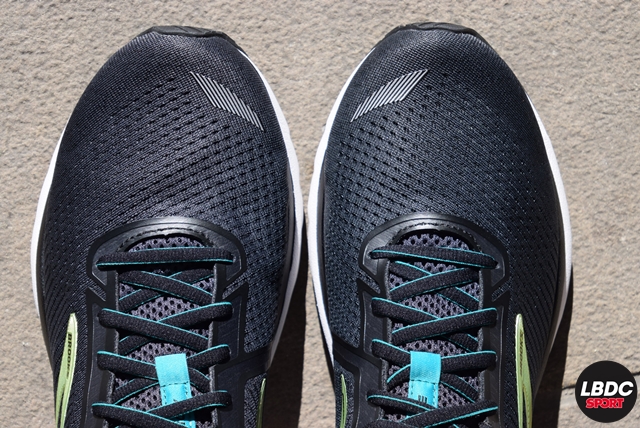 The laces are round and of a standard length. They are passed through a highly padded tongue that is attached to the body of the shoe by the base, so the laces are also passed through it, so that it does not move from its place during use. Underneath, a 5mm insole, also made with BioMoGO, is housed in a lined and padded interior that makes it clear that comfort is very important to those of Seattle.

Brooks Adrenaline GTS 20 keeps the fly level of a high-end daily training shoe with pronation control. Anyone who needs a stable and cushioned shoe to accumulate kilometers in a comfortable way, will have in this shoe a safe answer.

It reaches twenty editions in a demonstration of the great acceptance and good work on a model that since 1994 has not stopped evolving. Although having such a high bar, in these latest editions we see more nuances in terms of designs and more clear evolution in terms of technological and material solutions.

Brooks Adrealine GTS 20 maintains the 12mm drop of the midsole, in which it uses a double combination of materials (DNA LOFT and BioMoGo DNA) and Guide Rails that consolidate it as one of the best options for footfall that needs pronation control.

On the outsole, a combination of durable rubber with another blown, more grippy ensures good traction, while the upper has been devoid of TPU zones and now has more free mesh surface to better ventilate the foot.

The weight drops a little more to 300gr in men and 266gr in women. And it seems that Brooks has gone a little the clamp doing different finishes since it is available in no less than twelve 12! Different colors only for the women's finish, while eight different colors for the men's. No one will be able to say that they cannot find something with their preferred color.