He has lost his job, but he has invented a job for the love of art. Every afternoon he interviews an athlete and brings him home to us live. Something that only he could do: Juan Carlos Higuero. Today he is an entrepreneur but above all he is a person. "A good nameless worker is going to go further than a bad named worker."

At 41, he shows the same enthusiasm as always, that voice capable of lifting a regiment. Time has passed, but Higuero has known how to reinvent itself. Today he is an entrepreneur but above all he is a person. He shows a frank, lively conversation in these difficult times when he has also lost his job. But on the trip not a complaint is heard "because it would be a lack of respect for those who are having a worse time than me." So in front of the doubt we will always have Juan Carlos Higuero Mate, the barcode of humility. The son of a trucker from Aranda de Duero. The athlete who reached three Olympics. The athlete who lived 16 years in the Blume residence. The same athlete that today is a man of 41 who spends a multitude of hours sitting in front of the laptop trying to invent something different. "I keep saying that I would like the days to have 36 hours but I have never succeeded."

Question. In confinement, have you found an opportunity?

Answer. Yes, an opportunity in quotes. I knew this was going to be far reaching and I am hyperactive. I needed to do something and I am doing it. Suddenly, I see myself interviewing athletes every afternoon from home, investing in this six and seven hours a day ..., everything was born through a proposal made by Rober Alaiz and Dani Arce and when I started I said to myself: 'León, this is your vocation. '

Can you live on your vocation?

It is something that does not depend on you.

What does it depend on?

From third parties who consider that you do quality work.

Do you do quality work?

Has confinement left you without a job?

Yes, like many Spaniards. Somehow one has stayed in the gutter. I have moved away from the sponsors, from the things that I do. Now you have to regain ground. But it wouldn't be fair if I complained. I'm healthy. There are people who are having a worse time than me. These people must be respected because, after all, mine is one more obstacle that I will encounter in life. It is just a throwback.

Yes, through a small company ‘Higuero Sports’ in which I am the only employee: I set it up in 2014 when I was injured and they organized in Aranda de Duero, ‘The Ages of Man’. I went to the mayor of my town and asked her, 'Why don't we organize a race?' I realized then that this had a lot of bureaucracy. I went to an agency in my town and started a company that I thought was going to last a short time, and yet I saw that there were possibilities and here I am.

Who would have thought: Higuero businessman.

Rare soldier me, rather. But it is true that I learned to do things that I did not know how to do: a report, an Excel spreadsheet ... I had never studied to do it and yet I have learned by myself. I don't have to tell anyone to do them for me because I can. I get in front of the computer and ...

You represent the entrepreneur.

It was what I learned from athletics. I learned that you could have the best facilities in the world at your fingertips as I had the Blume, but if you did not try hard it was worth nothing. The way must be trained. No one can do it for you. So I argue that a good worker with no name will always go further than a bad worker with a name.

Do you earn money?

I'm not passionate about money. I do many things for the love of art. But I also know that money is important because in normal times like every day away from home, I have my whims contained and everything costs ..., but I am unable to obsess over money. I prefer that my work pleases because, if it likes, the money will come. Even without negotiating it, I have rarely negotiated it.

You were a wonderful madman.

Insanity helped me lose my fear of competition. But what is madness? For me one of the most beautiful follies was in a shop window of a sports store in Aranda de Duero in 1990. There were shoes that were worth 12,800 pesetas that I fell in love with and for 2 or 3 weeks I was giving the can to my mother, "I want those sneakers, mom," which I knew was worth a lot to us. My father was a trucker. But in the end, she bought them for me because my brothers convinced her not to tip them for a month and to buy those sneakers from me. For me that will always be my image of athletics, my most beautiful madness. Since then, I have learned to value everything more. I had to work for them.

Later, he learned to use the word.

On the Blume I had been dead for a long time in my room: I watched the speeches of the politicians. I did not have a good academic background, but I believed that I could train myself, I read newspapers, consumed a lot of radio, I went to bed listening to José Ramón de la Morena.

One day De la Morena did a mythical interview with you.

It was in 2007 after being champion of Europe. I went to the Gran Vía studio accompanied by Javi Guerra. We went up to the sixth floor at so many at night and we saw so many people working at the station at that time when everyone started to sleep. It surprised me. That stuck with me. I couldn't imagine it. Since then, I value journalism more.

Was your current profession born there?

No, I am not a journalist, I am only an athletic communicator because it is what I like, what I try to know how to do. Suddenly, I began to narrate the trainings on series days on the Blume track with my hare Edgar Rivera, who works in London today, and then with Brendan Medeiros. And since they gave me a lot of play, I continued that narration that always started, 'we are already here on the INEF tracks ...' and in which I tried to look like Gregorio Parra.

What has changed since then?

It's been 12 or 14 years, but I still have the same desire to succeed. I keep giving 100/100 in everything I do. I still think that my great virtue is the athlete I was who was the one who taught me to fight for what I wanted. Now, I think the communicator is only a reflection of the athlete.

Her legs are now her voice.

My voice is that of enthusiasm. I still talk to athletes. I still think I'm one of them. Every week I talk to Javi Guerra and even the most monotonous workouts I make him get the most positive out of it. The other day he said to me, ‘León, today I did 10 × 500’ and I, asking him about the most insignificant thing, I think I helped him get the most exciting out of that training. Everywhere there is something that later excites us. 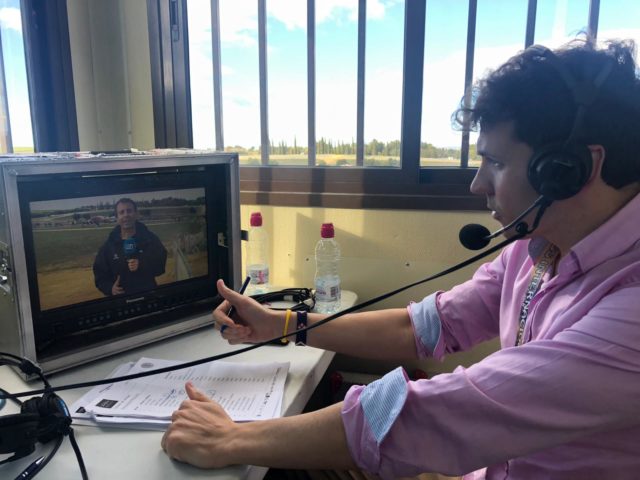 Can you live on emotion?

You can try, but it was what I said before: it is not only up to you.

Have you made it?

I am gaining knowledge. Who knows if someday, but not right now. In economic terms it does not give me to live, but maybe in the future ... I would like to live dedicated body and soul athletics, all athletics.

Did athletics solve your life?

It opened doors for me because I was there for many years. Only in the Blume residence did I live for 16 years. I was lucky with the clubs. I got the best scholarships. I knew how to save. I invested in apartments that are already paid for today and have become assets.

Could I live without working?

Maybe very, very rushed and, if he had no whim, maybe yes, but that would not be the plan.

Live, enjoy what you live, what you do.

Doing things right is what's important. I learned it very young. Suddenly, I found myself with money in Madrid, with a lifestyle… But by my side I had Antonio Serrano, who, in addition to my coach, was my best economic advisor, I saw the assets I had and I said to myself 'in the future I want to be like him. ' And, well, I think things have not gone so bad because what Antonio said to me from the beginning, "Juan Carlos, when you start making money you have to buy a flat." And I did it. I remember that he even accompanied me to see him.

Was it a mistake not to study?

Yes. I think so, but in that sense I was not clear on things. I didn't quite know what I wanted. I had studied administrative at Aranda but I didn't like it and didn't know what to do. If it had been now it would have been clear: sports journalist, without a doubt. But you cannot live twice.

What is the next mistake you plan to make?

I hope none, just because of age. So I don't have it in mind. Error is not a pretty word. But I guess one day I will get into a project that I shouldn't be involved in.

Isn't working for the love of art a mistake?

Sometimes yes, and sometimes no, because if the body asks you to do that, why won't you? But it is true that you invest your time and your knowledge and, if you do not get paid today, it seems that it should be like that tomorrow and you are in danger of people not appreciating your work. And that's not a good thing, no. We cannot allow it.

Things cannot be done for free.

If I had a good checking account, if the lottery came to me tomorrow, the first thing I would do would be to mount an athletics-only television channel and I would go all over the world to interview athletes. I would pay for everything and I would be the happiest man in the world. It would be like the Olympic medal that I didn't win, but I would enjoy it. The problem is that for now it cannot be. I do not have that money.