Fernando Martínez (@salitreilustra), the coach of that jewel, is a 52-year-old man with 25 experience in graphic design, which was what fed him. 4 years ago he was called to work in the CAR of Sant Cugat. "Income is not the most important thing if you do what you like," he explains.

His name is Fernando Martínez, he is 52 years old and does not think he has won the lottery because he is María Vicente's coach. "But in any case the lottery is to work with a group of talented people to whom you ask for difficult things and do them easily."

In that group of eight athletes, María Vicente is just one more.

“I can't think of telling her anything different from the rest. At least during training hours, ”says Fernando Martínez, who arrives every day at nine in the morning at the CAR of Sant Cugat, where that girl who sincerely loves us lives and trains: María Vicente.

And it is natural that we are passionate.

"What's more, everyone thinks about María," Fernando confesses. “Sometimes, comrades come, they are coaches and they say 'I thought you could ...' And it doesn't seem bad, as long as they tell me having coffee or a Coca Cola, because it means that everyone wants to contribute their grain of sand "

But the one who decides is: Fernando Martínez. A man who from 1991 to 2015 worked in his studio, as a graphic designer or full-time illustrator, and who in the afternoon went to the Barbarà Athletic Union, where he was responsible for combined and where he lived extraordinary things like at the Berlin World Cup 2009 who was an athlete trained by him: Agustín Felix.

Fernando was also that man who, according to him, was a "bad athlete." He divided his effort between "the combined, the triple and the pole", but there was no way. He doesn't know if it wasn't good, because he didn't have enough talent, but because there wasn't enough knowledge around him or yes because in those years "everything was very much to walk at home".

But the case is that Fernando was, above all, the graphic designer. The man who also designed a poster that mock up a magazine or made the corporate image of a company. The man who ate that until 2015 when he was called a third time from the CAR of Sant Cugat: "We have thought of you as head of combined for Catalonia." The difference is that this time he said yes. Otherwise, María Vicente would never have appeared in her life. "We knew each other by sight, but nothing more." 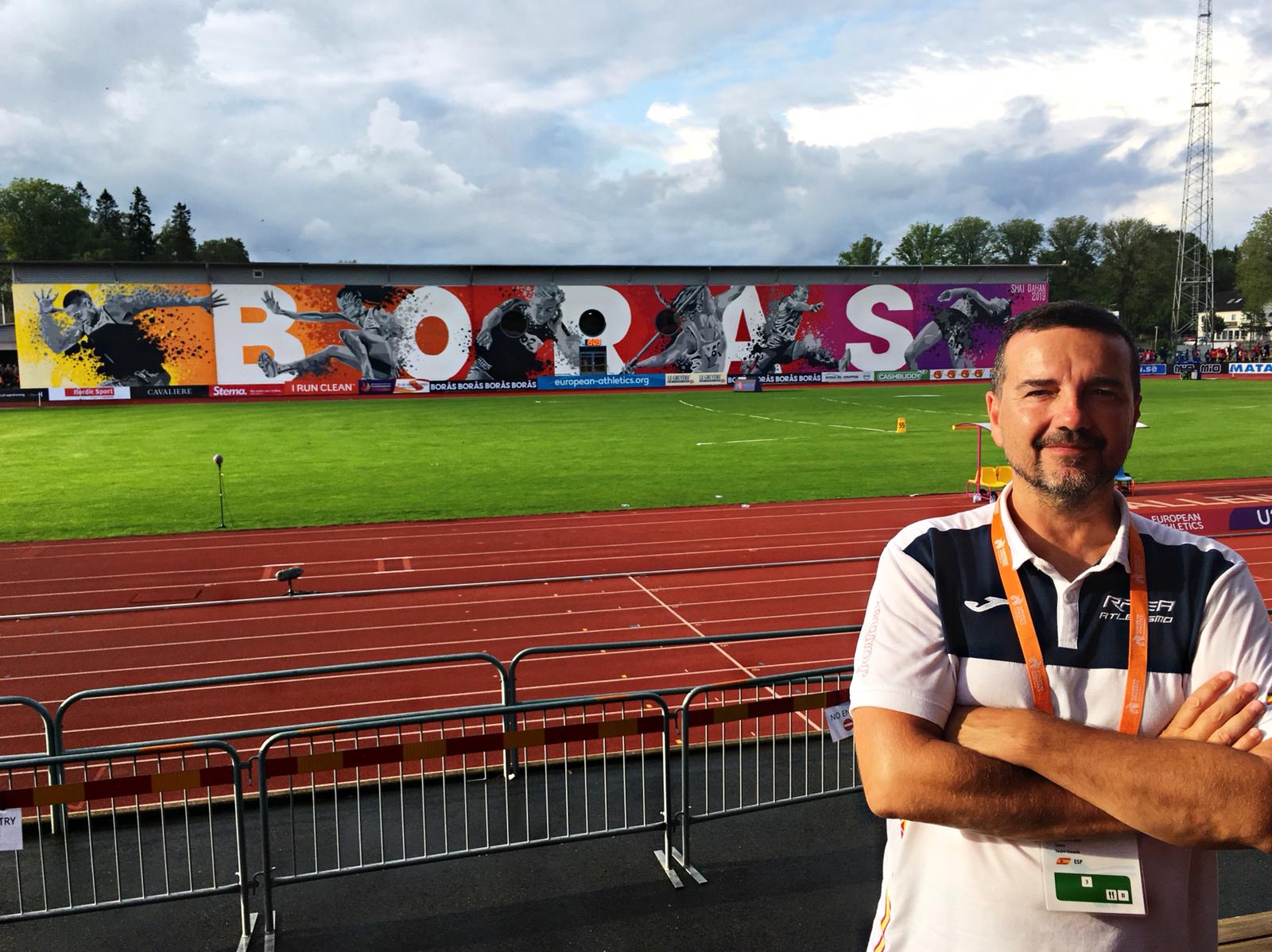 Until the day came, that day when Fernando stayed with Maria and her mother for coffee and asked them both, mother and daughter:

-What tests do you think you should improve Maria?

And then the two responded at the same time ("the height, the javelin and the 800") which is the same as Fernando Martínez, who at that moment realized something very important. "We all wanted the same."

Suddenly, they started talking about things that others do not even dare to dream. But this is the life of María Vicente and the one who directs it is he, Fernando Martínez, from an infinite realism.

“What if I fear that one day they can take Maria from me?” He replies. “I don't fear it, because nobody is going to take it away from me. Athletes are not the possession of anyone. Therefore no one can take it away from you or put it another way: nobody can take away something that is not yours. ”

But no one can take away what he has lived since he risked and left his profession. And he stopped going to study every day. And there was no more dawn after returning from training. In return, every day he arrives at the CAR of Sant Cugat, where every morning from Monday to Friday he deals with María Vicente. "On Friday afternoons I give him free to go to his mother's house to Hospitalet to spend the weekend."

Maria is already 18 years old and it is not true that it is an ice floe. “On the contrary: I see her as very vital and emotional and of course she has to fight in front of the nerves, among other reasons because a combination is two days on the track where there is time for many things to happen. The difference is that she usually complies with security. But that's because we train security. ”

Hence, extraordinary things have already happened as in that old Championship of Spain of Antequera in which, suddenly, Fernando received a message on the mobile that Maria was in a position to break the U-18 world record. María was 16 years old or 17 recently, Fernando doesn't remember anymore. But the case is that he went to her and said: "Look, Maria, we have a chance to break the record if you go out in the 800 below 2'25".

That day we got out of doubt if we ever doubted it: we were facing an athlete from another planet.

Even so, Fernando refuses to admit that he has won the lottery: "No, no, really not."

And then he explains:

“I have been fortunate to work on things that I like. I liked drawing and now I am passionate about athletics and I am fortunate to train level athletes that allow me to be demanding with them. Do not I know no coach who doesn't want to have level athletes. But that does not fall by chance like the lottery, but they are years of work, in my case since 93 when I stopped being an athlete. Since then, I have even clearer if the lottery is to do what you like. ”

The reality is that today Fernando is here, in the CAR of Sant Cugat, about 15 minutes from his house by car and the acknowledgment of this story is the Olympics, who knows if the Olympic Olympics, Maria Vicente will have Then 19 years.

The dream is alive as in a movie that has just begun and in which María Vicente had already heard her coach tell that he, at age 52, has never been in a Olympics, “More than in Barcelona 92 ​​as a spectator”.

When we listen to him, we realize the real work that costs to reach the sites and that María Vicente, just for being here today, is probably a miracle that grants us wishes that, until we met her, we imagined the edge of the impossible.