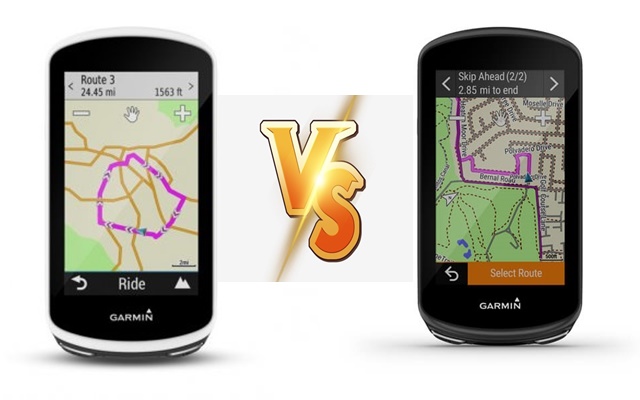 As usual, Garmin maintains its policy of improving versions within the same model.

I say the theoretically improved one because although it is evident that the 1030 Plus takes a step forward in certain product characteristics, we are faced with two GPS cycling computers with substantial differences that may interest a different user profile.

For this reason, I decide to enter the subject below to explain the most important differences between the 1030 and the 1030 plus. Differences that without being of great relevance should be borne in mind before scratching our pockets and investing in a top-of-the-range cycling GPS.

If at an operational level equality is the predominant note, at an aesthetic level things are quite different.

The Garmin 1030 Plus comes to the market with a design quite different from the 1030. Now the cycle computer is something more compact and totally black. This new look gives it a more elegant and fine image (similar to the Edge 830 and Edge 530).

As for the resolution of the screen the thing does not change. 470 x 282 pixels and 3.5 ″ in dimensions that are more than enough to navigate with extreme comfort.

What if Garmin has corrected slightly is the brightness and visibility of the screen. Now it is easier to follow a track or quickly read the data on the screen. We could say that the images look slightly sharper and less bluish.

Externally, these would be the most relevant changes to a device that, as I said, is in no way a complete renovation of the previous version. In fact, the Edge 1030 continues to sell and will continue to do so strongly in the coming months.

Entering properly into operational issues the differences are not of great relevance either.

At the initial level, if I would like to highlight the leap that the memory and autonomy. Now the Garmin 1030 Plus has an internal capacity of 32 GB compared to the 16GB of the 1030 (in my opinion the 16GB is still more than enough)

As to autonomy the increase is about 4 hours, going from 20 to 24. A noticeable increase and especially interesting for those who love long-distance sporting challenges.

At the level of benefits also processor has been improved. A change that the user will hardly notice beyond saving some time when loading routes and routes within a map.

Precisely the maps have also seen their offer increased within the device. Now any version of the Edge 1030 plus will come with road maps of America, Africa and Europe. In the Garmin application we can select the map that we want to load. What may seem silly will be extremely interesting for people who travel the world by bicycle.

Beyond all the above, the most relevant novelty comes with the personalized training sessions.

Some totally intelligent sessions that Garmin is able to suggest based on smart metrics. V02 Max, training load, spin (aerobic and anaerobic), or power and pulse data will be some of the factors that will condition said training plans.

An important change that comes to glimpse what in my opinion will be a common technological trend. Garmin wants and will end up being our personal trainer.

So far the differences between one and another device. Interesting differences that can tip the balance towards one or the other GPS but in no case will they be so great as to say in a while that of “I was wrong”.

Whether you buy the 1030 or you opt for the 1030 Plus I am convinced that you will be satisfied with its benefits.

It should be remembered that we are before Highest-end cycling GPS on the market and that today it is impossible, in my opinion, to find something better in terms of global benefits. It is impossible for either of the two products to disappoint you.

Basically what you should assess is the aesthetic issue (where you have to recognize the most minimalist orientation) and the price.

You can buy the Garmin Edge 1030 on sale through Amazon, while the discounts on the Garmin 1030 Plus are even more moderate.