News : How to achieve your first pull-up? The Keys to do it correctly

Very good friends of the sport. In today’s post we will talk about Calisthenics and one of its basic exercises, the dominated one. This exercise, so loved by some and hated by others, will be the beginning of a long way, to get to make a great multitude of more complicated variants in this world, so it will be important to have a good base and technique of the dominated to continue advancing in the rest of the exercises or tricks.

What muscles do I exercise in a chin-up?

When it comes to doing the chin-up, there will be a multitude of muscles that will work in its execution and many others that will be important to keep active to avoid bad technique and undesirable postures. The main stakeholders will be:

Also muscles such as the pectoral and the abdomen, among many others, will be activated to support and support the aforementioned. As you can see, pull-ups are a very complete exercise.

Very illustrative but I have no idea how the movement is done. Can you explain it to me?

How to perform a pull-up correctly

The chin-up can be carried out in various ways since we can vary both the type of grip and its amplitude, as we saw in the case of the Australian chin-ups. Today we are going to focus on the strict basic pull-up as such:

2. The width of the grip will be slightly greater than the width of our shoulders, thus making it easier to lower the entire weight of our body on our arms, finding the head wedged between both shoulders. 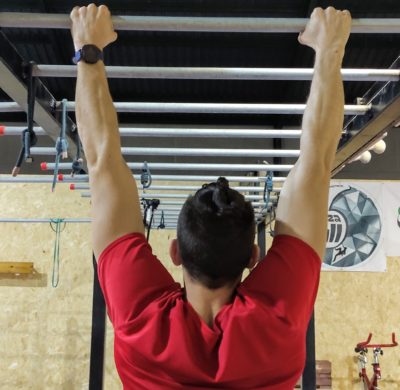 3. From the previous position we will perform a traction in which we will perform an elbow flexion and shoulder extension, together with a scapular retraction where our shoulder blades must lower and close, in such a way that our pectoral will expand.

4. On the way up, our chin should go over the bar before starting the downward movement, where in a controlled way we should finish in the starting position. 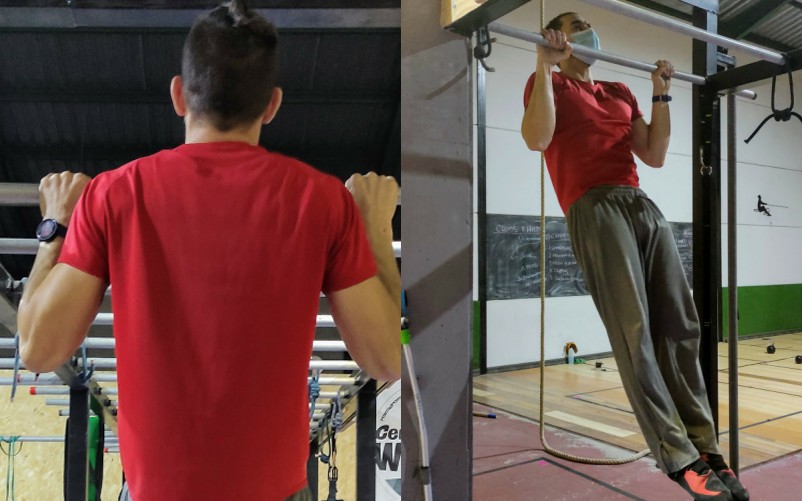 5. Legs must be kept completely straight, maintaining good abdominal and gluteal activation, avoiding pelvic anteversion that generates excess lumbar curvature. For this it is beneficial that the bar is placed higher to avoid touching the ground.

Perfect, I already know the technique but when it comes to doing it, I don’t rise an inch. How do I start to progress?

Exercises to move towards your first pull-up:

As we mentioned, the chin-up is quite a demanding exercise for all those who have never done it, so do not despair if you do not have enough strength to do it. Like another basic, such as push-ups, there are ways to work them until you can do them yourself. Here are a few progression exercises:

1. Pull to the chest: It is a typical one of the gym machines and it is the same movement that we will perform in the chin-up with the exception that the bar is unstable to the pulling movement when it is on a pulley.

2. Assisted chin-up machine– One of my favorites for newcomers, as it is the same exercise with assistance on the feet. By being able to regulate the load, the machine will return the weight that we have put in, subtracting it from that of our own body and making it easier for us to climb. It will also make us visualize the movement for when we want to fly alone.

3. Isometric off the hook: The simple fact of holding on to the bar will alert our muscles to the intention of wanting to achieve our goal, strengthening our back and arms.

4. Standing chin-ups: we will get on a box, we will hold on to the bar and we will take off all our weight, maintaining the support of one of our feet. This will be in charge of accompanying the pulling movement, facilitating the exercise. 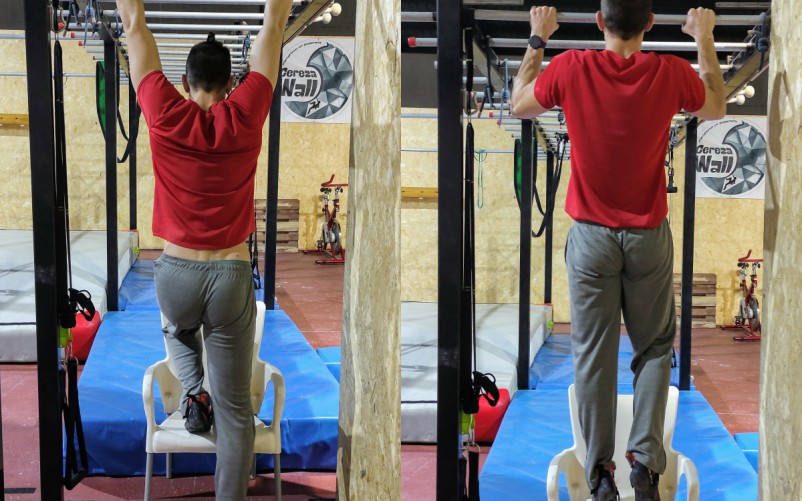 5. Dominated with rubber: It is the exercise that is most similar, since we must keep the legs and knees stretched to maintain the tension of the rubber, being able to choose between the different thicknesses to complicate the exercise.

6. Negative pull-ups: if Muhammad does not go to the mountain, the mountain will go to Muhammad. What does it mean? When we do not have enough force to perform the concentric movement, the possibility we have is to work in eccentric, trying to go down as slowly as possible.

7. Isometric chin-ups: It is normal that when performing the exercise, some of the phases of the movement cost us more than others, so it can be interesting to work short ranges or even endure sections in isometry to strengthen the weaker muscles. The help of elastic bands for this exercise may be interesting.

As advice, get rid of the obsession of wanting to climb if you are not yet ready, since its demand can cause you to get hurt. Also tell you not to think about pulling yourself towards the bar, visualize the exercise as the opposite, bring the bar closer to your chest.

If you are constant and carry out all the proposed variants, we assure you that in a short time you will be able to reach the heaven of the gods of Calisthenics.