Electronic massagers help relieve the most common pains and release stress. You do not have to be an elite athlete to use them, not even an average fan: on a day-to-day basis, the body can suffer from staying too long in a static position (for example, looking at the computer screen) or wearing shoes uncomfortable There are devices, in short, that help reduce those discomforts and relax.

There is an entire arsenal of useful products such as back and neck massage cushions or those indicated for neck and shoulder, electrostimulators, massage pillows, portable percussion massagers, bath machines, foot massagers or even for tired eyes.

The athlete can undergo different types of massage and in various areas of his body but, in general, will help prevent injuries, it will stimulate blood circulation and it will be an oxygen balloon for a more efficient recovery.

Considering the above, we analyze below a product that has given much to talk about in the US market.

The effectiveness and design of Hyperperice, the brand that Hypervolt has developed, have not gone unnoticed by thousands of fans, and even for elite athletes.

It was in 2010 when Hyperice was established in the market to create the first device with high performance portable ice compression, so the brand plays the trick of innovation. And it was a novel system in two parts, which took advantage of the properties of ice and compression to offer a preventive treatment and accelerate the recovery of injuries. So, the goal was last was improve the performance of muscles and joints.

In 2011, Hyperice begins to test its products in elite athletes, based on an entire trial and error system with reviews that would guarantee that it was indeed a first line product. In July of that year, for example, his concept is introduced to NBA players as Blake Griffin or Kobe Bryant, who adopt it to their recovery regime.

The following year, 2012, Hyperice releases the final version of its product, once it has been used by sports professionals. The marketing machinery is already underway by then, so that you can see Lebron James wearing the shoulder ice compression device on the cover of ESPN Magazine, which included a post-training scene.

Hyperice continued with its innovation work from there, convincing more and more athletes with a well-orchestrated marketing campaign. By 2015, it was already a recognized brand, which had reached relevance thanks to his multiple appearances in the media. He also came to fitness centers in the United States. 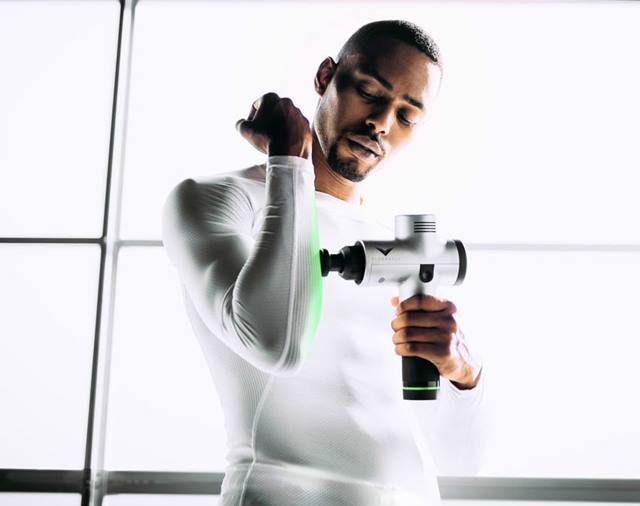 What does Hypervolt do?

Hypervolt is one of the star products of Hyperice. It is a wireless vibration massage device, which helps to relax the muscles to improve their mobility, especially if they are sore or stiff. It is the general definition of a product that, according to its manufacturer, can do all this:

To all this we must add that it is about a very handy and easy to use device for myofascial self-liberation. The latter is part of its technical specifications, which we can also summarize as follows:

How to use Hypervolt

Before using Hypervolt, it must be loaded. You should also remove the small protective dome that covers the appendix that goes over the body, which provides the massage.

The user may be dressed, but with clothing fine enough. It is recommendable Stop in areas that can be considered more loaded for about 30 seconds before moving forward.

It suits combine its use with gentle movements, as Hyperice explains in a video tutorial. For example, if you are giving the massage in the area of ​​the biceps femoris, you can gently lift feet and twins.

There is also Several heads to adjust well to different parts of the body, so it's about changing.

Hypervolt has a strong presence in the US market.

The positive? For his value for money we can consider it a product, we could say, of affordable luxury. Its ergonomics is also a key factor, because it implies ease of use. And, most importantly, the user can benefit from the benefits of vibration therapy.

What you like the least about Hypervolt is its price. We talk about about € 400, which does not seem too much for the product that it is. There are several cheaper alternatives in the market, we leave the links:

The news Hypervolt, the ultimate massage machine? appears originally in the Stock Exchange of the Corridor.