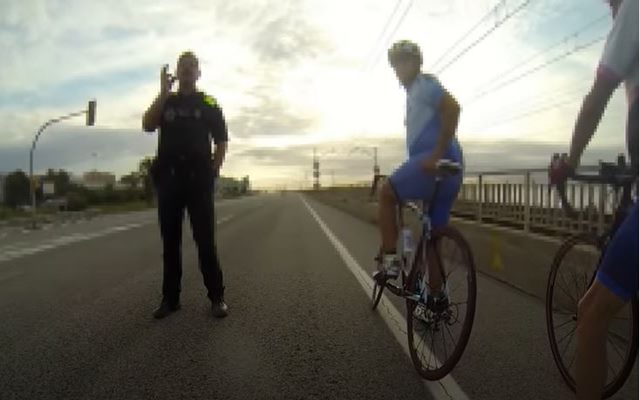 Anomalous situations continue to occur in this confusing de-escalation process that supposedly should lead us to the “new normal”.

This time those affected have been a group of cyclists that this morning they were shooting on national II while passing through Vilassar de Mar when at 8:30 in the morning (according to the video description) they had their training interrupted by the presence of a local police officer.

As can be seen in the video images, the agent, located in the middle of the road, decides to stop the passage of one of the cyclists who apparently rolled individually, were federated and did so within the stipulated time slot.

The agent's statements are blunt "A federated athlete cannot leave his home for more than a kilometer. Just like everyone else".

The agent with his hands in his pockets, and who at no time is interested in the federation license or the municipality of residence of the cyclists, warns them verbatim of "If I stop him outside his house, I take him and put 600 euros in him." An agent who is already being harshly criticized in the comments of the video by residents of the area who affirm that it is not the first time that he has been implicated in any controversy.

Cyclists are engaged for several minutes in show the agent that they are acting legally and that as federated they can train individually, within the health region and respecting the time slots.

COMUNICAT: From the City Council volem apologize pels fets oorreguts aquest matí. An agent of the Local Police has not applied the regulations when a group of federated cyclists volia passar pel municipi. Reiterem apologies to totes les persones that s’han vist affects

After several moments of tension in which a cyclist takes the opportunity to "sneak in" and break free, the tumultuous "meeting" in the middle of the N-II dissolves and the cyclists decide to turn around

The video is still one more example of the generalized social confusion that sportsmen and law enforcement officers are not spared either.