We already told a few weeks ago that the Bislett Games of this year 2020 are going to become the so-called ‘Impossible Games’. At the time we advanced that the poster (only formed by Scandinavian athletes) was truly spectacular and that payroll has only increased over time. The Ingebrigtsen brothers have confirmed their presence at the ‘Meeting’ to be held in Oslo and, in addition, the organization has informed that a spectacular duel will be carried out thousands and thousands of kilometers away. It should be remembered that Jakob and Henrik came from achieving the National Record of 5k en route a few days ago.

Timothy-Jakob, one of the best duels today

It will be a face to face between the ‘Team Ingebrigtsen’, made up of the three most famous brothers in world athletics, and the ‘Team Cheruiyot’, who will participate from Nairobi. Thanks to the cooperation between the Kenyan Federation, Omega and the NRK producer, it will be the first virtual race at such a high level in the history of athletics. The distance will be quite curious (2,000 meters) and the test will be held within the meeting on June 11. Timothy Cheruiyot's PB at 1,500 is 3:28:41, while Jakob Ingebrigtsen is at that distance 3:30:16. 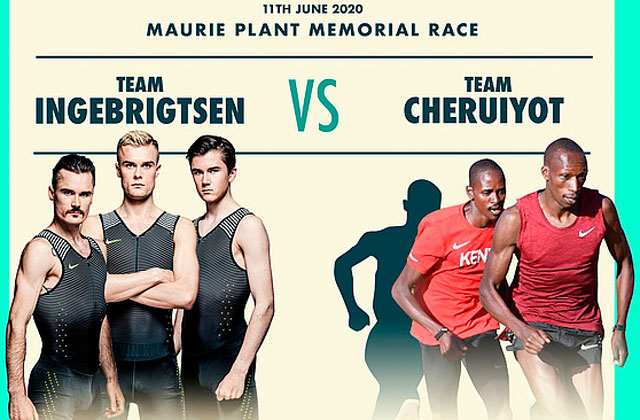 You want to surrender tribute to the legendary Maurie Plant, who passed away in January this year, with ‘The Maurie Plant Memorial Race’. Both teams will start with five runners and will have to finish with three. The winner of the duel will be the team with the best overall time for the three best runners. But of course, individual times will also count.