News : It loses the first position because of the electronic change. Debate reopens in Paris Nice 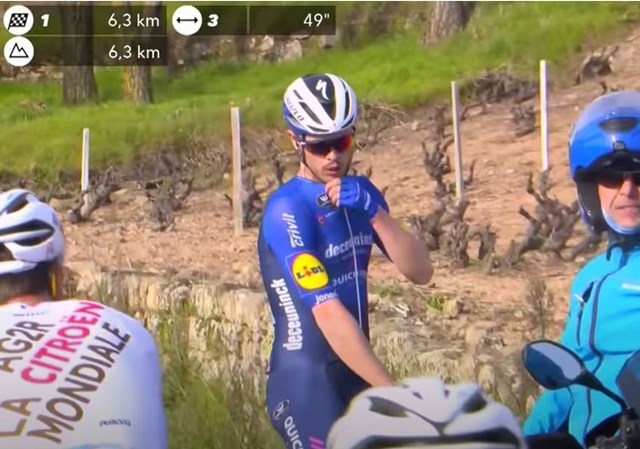 When the problem with the disc brakes does not seem far from closed, yesterday’s stage at Paris Nice reopened another very interesting and juicy debate about the electronic gearbox on bicycles.

The stage was facing its decisive stretch when an always combative Remi Cavagna decided to anticipate the peloton and face, in the company of Luis León Sánchez, the final climb with a few seconds of advantage.

The Deceuninck Quick Step rider who, a mere 24 hours earlier, had been left with honey on his lips and just a few hundredths from achieving the victory in the time trial, He was riding at the head of the race when suddenly a breakdown in his bicycle forced him to stop.

As can be seen from minute 1:45 of the attached video, the problems suddenly appeared on the bicycle of a Remi Cavagna who couldn’t believe what was happening.

The Gaul was unable to change gear and the derailleur of his Specialized was totally locked in the lower crowns.

With a huge frustration the French rider had no choice but to stop, wait for the team car and change bikes. Thus losing any option to a victory that already seemed very complicated.

In addition, as can be seen, not even the Shimano neutral assistance motorcycle was capable of solving the mechanical problem, which shows the delicacy with which electronic road groups must be treated.

It is true that electronic gearbox has excellent advantages over mechanical or traditional gearbox but it is not the first time that something similar has happened in competition.

Bauke Mollema, Trek Segafredo cyclist, left us at the Giro d’Italia 2 years ago some images that showed he was dissatisfied with Sram’s electronic group. The Dutchman shouting “f * ucking Sram” felt tremendous helplessness at one of the decisive moments of the race.

In the case of Cavagna, it is unknown exactly what the fault was and although some suggest that it was more of a battery disconnect problem, neither the team nor Shimano wanted to clarify what happened.

There is no doubt that mechanical problems are part of this sport and that cyclists have and will continue to deal with them on a daily basis, but it also seems clear that all equipment used in competition should be perfectly tested.

Just 15 days ago, during the UAE Tour time trial the young Italian from Trek Segafredo, Antonio Tiberi inexplicably broke his time trial bike a few meters from the finish line.