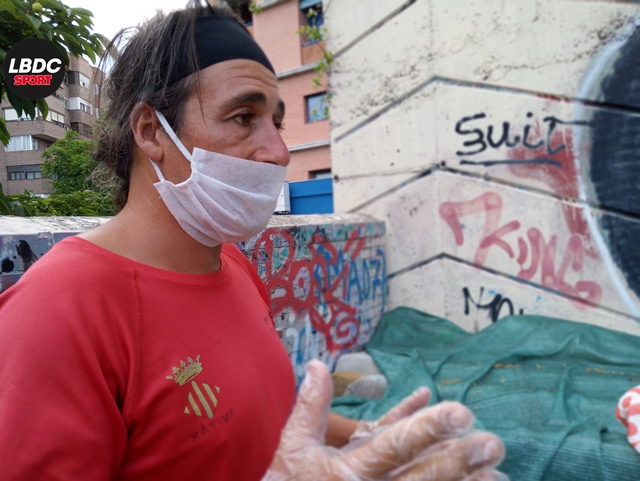 The mystery is solved in the most unsuspected way. The great Joaquín Carmona lives on the street and has been off Twitter for 3 months because, with the libraries closed, he has nowhere to turn on his laptop. A very hard story. Hopefully someone can come to your rescue.

Well, get ready. I don't even know where to start but here I have Joaquín Carmona by my side in a Madrid park where his cardboard, his mattress, his backpack, the three books he has borrowed from the library are. And, of course, your laptop. Without that computer (which was purchased many years ago) this story would be impossible.

Joaquín Carmona would never have come to us. His way of radiographing athletics through his Twitter account would not be missed so much after these three months in which, disappeared from the network, we have asked ourselves:

- Is he dead? Has the coronavirus taken it away?

Luckily the answer is NO.

Another thing is the fine print of that answer.

-I put the last tweet at the Atocha station the day the Alarm State started and the police ordered me to leave before closing everything. Since then, I have nowhere to turn the computer on or where to charge the battery.

I suppose there is no need to give more data. Oddly enough, Joaquín Carmona is a homeless man. A 46-year-old man who has nowhere to live and who prefers to sleep in a Madrid park than to do so in hostels, where he has been told "horrible situations" that he prefers not to face.

-At least, here I have a mattress.

If it wasn't because I have it in front of me it would seem like a nightmare. I do not understand that a man, who has managed to reach so many people through Twitter, is a man in the open, who showers in a bathhouse for 50 cents.

-I've picked food of the cubes of trash and, even, the mattress in which I sleep I have taken it in the street.

Joaquín was a man who came to Madrid at the age of 19, who started working "distributing advertising" and who later had "an ice cream kiosk on Orense street ”.

Who was going to tell him.

He came from Zamudio, a town next to Lezama in Bilbao, where he was the youngest of two brothers in a totally unstructured family. “My father was an alcoholic and my mother became very ill so that the poor thing could only go outside once a year because we lived in a room without an elevator and it was unspeakable to manage it. From a very young age I remember going to go shopping. "

And he was a good student. "In fact, in eighth grade I got outstanding but then, in third grade at BUP, given the situation at home, once I was orphaned I left him."

Today, it is not known if all those data are worth to explain this macabre joke. Joaquín Carmona sleeping on the street, passing the cain, supporting young people who threaten to hit him at night or those policemen who when they see him next to the laptop, surely tweeting athletics, come to ask him what he does, where he got it from . I know believe than the he has Stolen.

Gentlemen: that computer is the only thing you have and what further hardens this story. It has left me almost sleepless tonight. It always makes you mad to see a man on the mat. Especially in this case with such a special ability, with such a bestial memory of athletics that he knows how to organize it and how to present it on Twitter: he uses even Excel.

But if it were not because you are healthy, you cannot be worse.

Joaquín Carmona has not been able to stay at home during the Alarm State: he has no home.

Joaquín Carmona was a mystery that is solved today in the most cruel and unsuspected way. What a pity. I imagined myself that it would be a man who worked in a laboratory, in a university or in the accounting department of a company. Never a homeless person who connects to the wifi of a public library that, since March 15, has the desks closed by the crisis of COVID-19.

"I want to go back to Twitter but I can't," he justifies.

Joaquín is also a man who has never worn a bib and who would like to one day find the autograph Paula Radcliffe signed for him after the San Silvestre 2005.

-Since the ice cream stand collapsed I have survived as I could. I have signed up for Public Employment Exchanges and something temporary has come out. And what little I have earned is what I am throwing away because I do not spend anything. Only the elementary to eat, to subsist.

He is a man with a good presence who is also a vegetarian. Listening to him talk about athletics or cinema is a delicacy in this short time I was with him. And of course, its head I It seems than works wonderfully.

I mean I don't see anything weird but it's hard being by his side. Night falls and he begins to cool down seriously in Madrid and he is wearing flip flops because he cannot buy slippers. And where the cold enters first is through the feet.

However, this man is the same man who has created a community of faithful Twitter followers who, without knowing him personally, adore him. The other day even an elite marathoner Iván Fernández told me that he had personally written it to ask where he was.

What's more, here, on the street, he meets his needs because there is no other possibility.

And, in full confinement, the police have called his attention for going to charge the phone to the Metro when he had no other possibility and it was a vital necessity "and just to listen to some music." It was 24 hours a day with nothing to do, because he couldn't even watch television.

It is also possible that those same police officers, who attract your attention, applaud or share a tweet of yours online. But it is clear that they cannot even imagine that this man is Joaquín Carmona.

The social workers, to whom Joaquín says ‘look, I am writing athletics on Twitter’, cannot imagine the magnitude of what we are talking about.

On Saturday, the tweet I wrote asking about him exceeded 35,000 impressions with unremitting activity.

People from all walks of life asked for him, until lawyers of the State.

But is that nobody. No one can really imagine this. Not even the companies that spend thousands of euros on community manager courses and things like that could imagine that a homeless person gets to where Carmona has gone. What a talent or, rather, what a talented man with that ribbon in his hair.

I found out by chance where he was. I went and found him there or rather assaulted him as I later recognized him. I found a highly educated man who was initially reluctant to tell this story. His story.

I tried to convince him that this is the only way that people can help him because you can't be worse. And I, with what I earn, cannot help you: the only help is to tell it, solve this mystery, claim that there is no right for talent to tweet at dawn in the open, in the vicinity of the Casa Endendida, as far as the wifi or until where I know just the drums of the computer.

And, if it ends, there is no other choice but to wait until the next morning when the library doors reopen. And Joaquín Carmona will go there again silent and poorly dressed because there is only what there is.

-What a life this, friend. What a scoundrel, I say.

-Never thought about it. He had always lived in shared flats. I even got to rent a studio in Malasañana. But you never know when everything can be twisted and I got twisted and since then I don't know how to get out of here.

-To me Twitter is a therapy that relieves me of all this and allows me to write about one of my great passions such as athletics since I saw Kratochvilova win at 800 in the Helsinki World Cup 83 on a vacation in Los Alcázares. I liked everything but that career stayed with me. And the fact of knowing that I entertain people on Twitter leads me to think that at least I'm doing something right.

-And nobody has ever offered you anything even if it was by direct message?

-Only once in the Logroño marathon to speak at a round table. But, in the end, it was suspended.

And, well, what else to tell.

I think I can only say thank you.

Thank you, Domingos Olivares for approaching this story from Turin: you already have news of Joaquín, I have already asked you to stop sleeping on the street.

Thank you to me friend Noel by to go like lightning to the park and verify that it was indeed him.

To celebrate, the three of us went to dinner at the Burger King: we have already agreed that next time Joaquín will invite.

It would be a sign that things have changed.

Let no one ask me about the Madrid park where Joaquín Carmona lives because he has asked me not to say so. We also hardly talk about his family, who left him alone in the desert, but in all families weird things happen.

I think that for my part the objective has already been achieved: we already know who Joaquín Carmona is, we already know that he is more than just a man in distress and than any help (if possible, a job) would be welcome.

I have the feeling that on Twitter he has made more than enough merits and that with the greatness of the world there are people who will give him that help.