We analyze Joma R. 4000 Reactive A great option for those looking for a competition running shoe to use at all distances, but especially the marathon. Joma returns to the charge very shortly after presenting the surprising R.5000 and making it very clear that the Toledo brand also has its sights set on racing.

The new R.4000 is a complete revision of the model, which, although it is inspired by the previous finish, is much changed and incorporates new materials that give it an improved performance. 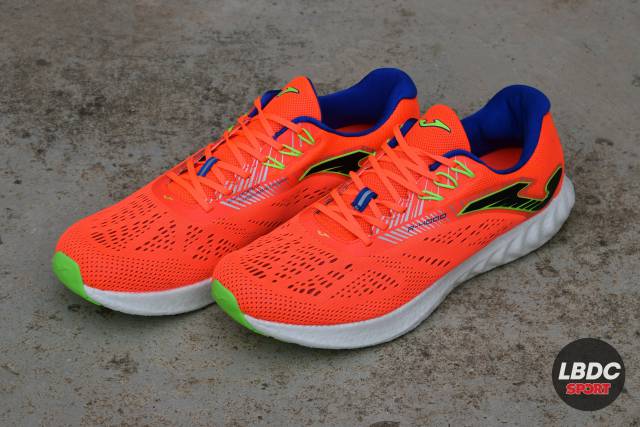 Proof of this is the midsole, which comes with the vitola of achieving 82% energy return, and this thanks to a compound that makes it comfortable to travel all kinds of distances, even the longest.

And the elite. Because there are those who do not see Joma as a brand that fights for great results but is wrong. This Joma R.4000 is designed to run at performance even below 3 ‘per kilometer. In fact, top-level athletes such as Likina Amebaw, Hugo de Miguel, Julia Takacs or Jesús Angel García-Bragado, among others, already use them.

One of the arguments to consider it as a very respectable flying shoe is its incredible low weight of only 215g … but there is more, let’s see them. 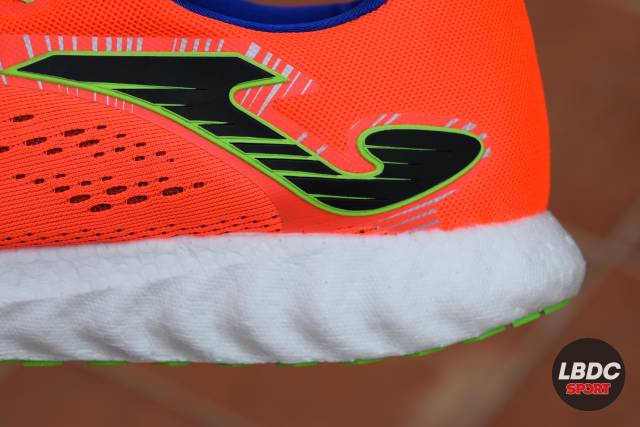 The Joma R.4000 Reactive midsole is undoubtedly the most important part of the shoe. No, it does not use carbon fiber plate. But for those who think that there is no life without a plate, it must be said that this midsole is made of a material capable of providing an energy return of 82%, according to measurements by the Toledo brand itself and certified by a study carried out by the Center. of Innovation and Technology (INESCOP).

This study is based on the resilience of the material, that is, its ability to resist elastically when it is deformed by the pressure of the runner when it hits the ground and falls with all its weight on the midsole, and to return to its position as the pressure subsides. This is certifiable and the UNE-ISO 4662: 2013 Standard exists to validate these values. 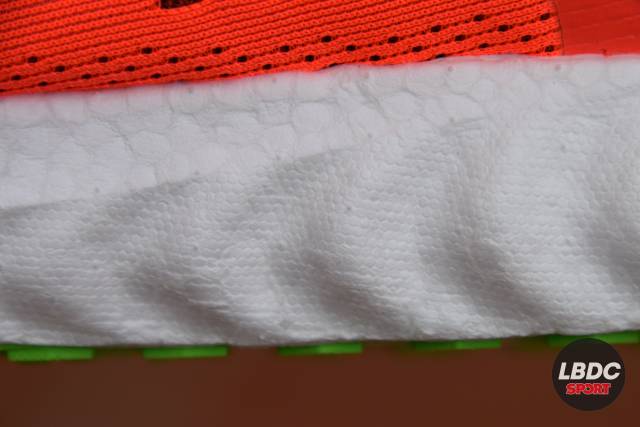 And what does it have to do with running, if numbers and rules are complex for me…? Well, every time the runner hits the ground, the midsole manages the energy released in this impact, causing a return of it (that is, of that same energy). This is accomplished by transforming that impact into usable momentum for the next stride.

Something important is the ability of the material to regain its shape. And you have to do it quickly, because the time between stride and stride is very short, longer than many people think. Well, the ability for the midsole to regain its shape and to be 100% ready for the next impact is reactivity. And of that, this R.4000 Reactive, is left over, hence Joma highlights it in the name of the model. 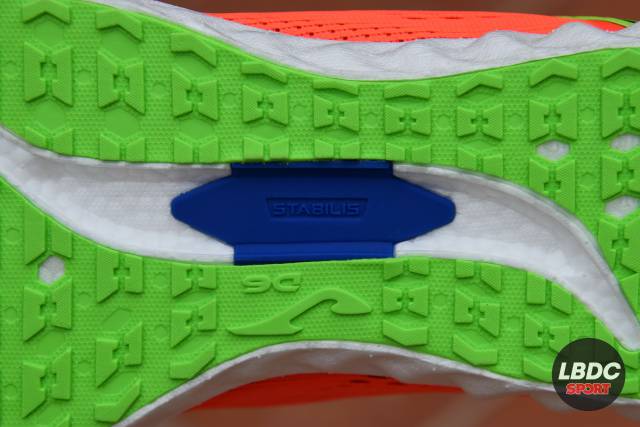 An important element that may go unnoticed is Stabilis, the system that Joma has to stabilize the tread. It is a rigid piece made of TPU (highly visible from the sole). It is located right in the center of the shoe and its function is to prevent excessive twisting of the foot when it rotates during the transition of the footprint. Especially when tilting back to front, at which point the foot turns slightly shifting from support to landing, heading for the final phase of the footfall, where contact is made with the front to initiate the phase of flight.

The drop, or difference in height (thickness) of the midsole between the back and the front of the shoe is 6mm. 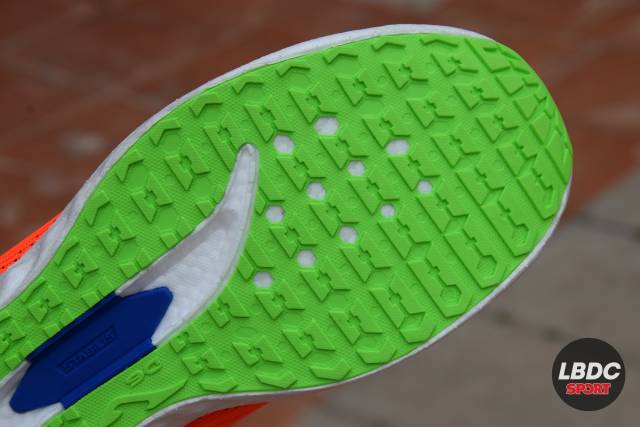 There are several things to highlight about the Joma R.4000 Reactive sole. The first one is that it uses a rubber called Durability, typical of the Spanish brand. As its name suggests, it is very durable as it is a type of solid rubber with great resistance to wear. Although Joma also gives it a point of softness so that, in addition, it is as adherent as possible on hard surfaces such as asphalt.

Another noteworthy aspect is the design where on the one hand there is the taqueado, on the other the emptying of material and more … 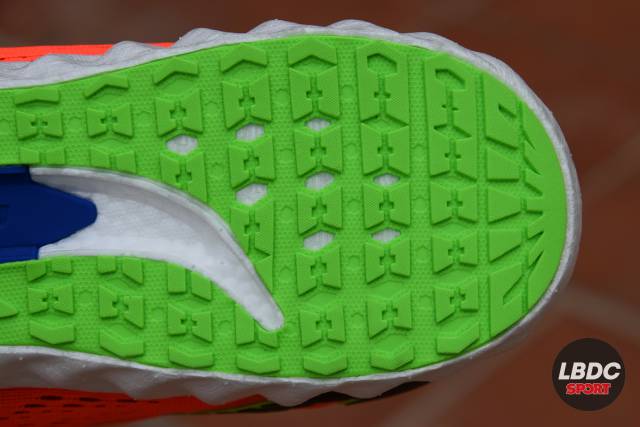 The tacos are numerous and in different shapes. This is good at the traction level because it guarantees to do it in all directions. On the other hand, there are gaps between the studs where there is no rubber and the midsole is visible. This is due to two reasons: The first is that if heavy material such as rubber is emptied, it becomes light, very important in a competition shoe. The second is that this emptying is not carried out in the tun-tun, since it is clearly appreciated that the inner face of both the forefoot, as near the heel, do not have those holes and it is to pack the sole in that area so critical with the footprint, giving it stability.

The longitudinal strip has the function of helping the foot by guiding it during the transition of the tread. It is right there, in the gap that is generated where Joma inserts the Stabilis piece 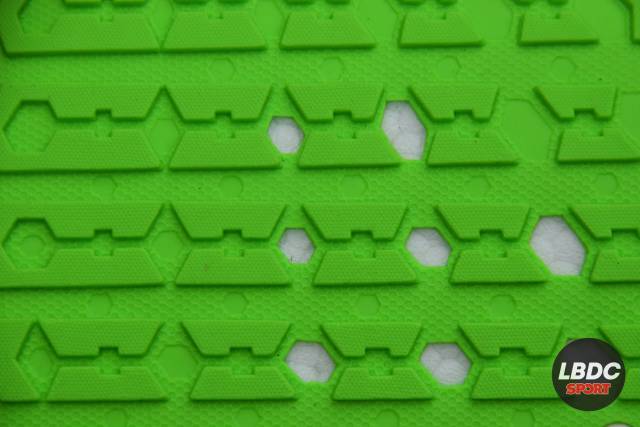 Flexo is the technology that helps the shoe make the transition movement of the tread as easily and efficiently as possible. It deals with the flexibility of the sole, taking into account that since the rubber has to be resistant, it does not impede the flexibility of the whole. So, the way in which Joma manages this problem is thanks to this Flexo technology that is in charge of studying the best way to distribute the lug to ensure flexion lines that facilitate that tilt from heel to toe, step after step. 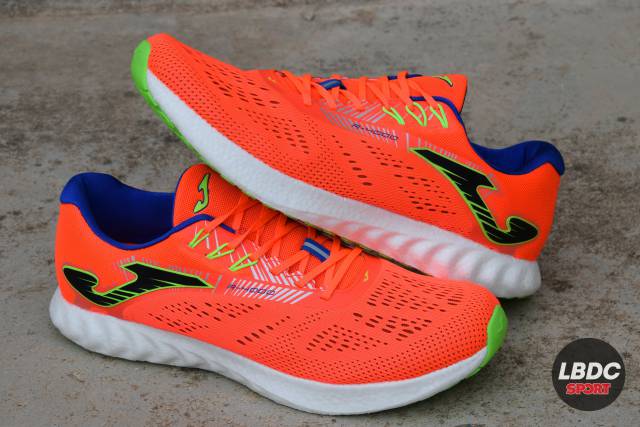 The Joma R.4000 Reactive upper is built with a single layer, something common in flying shoes, where you fight to the last gram. With a single layer, apart from the lightness, another feature that is enhanced is the breathability since it is easier to manage. In addition, if there is something that this R.4000 is left over, it is in ventilation holes since it is full and some are large. 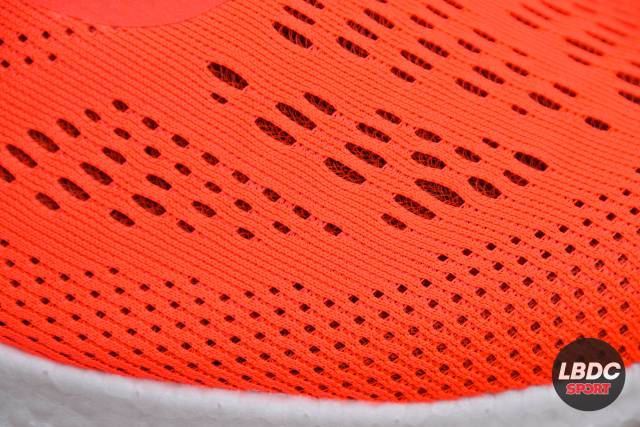 All of this is VTS, the Joma breathability system and that, in this case, it has a design pattern in which the front openings facilitate the flow of air from front to back, helping to keep the foot cool and ventilated. 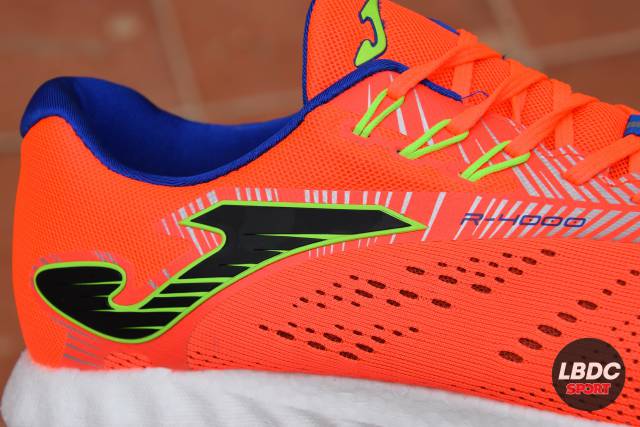 Another technology present in the upper cut is Sportech, which consists of using a material (injected rubber) to reinforce everything that is support, from the lacing, to the heel, and especially in the area that hugs the foot around the ankle. That Joma has changed the classic TPU for injected rubber must be understood in what I said before, to scrape some grass here, others there … 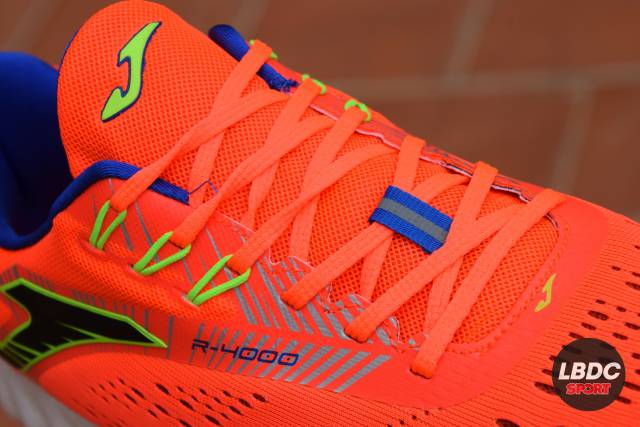 The laces are passed through six normal eyelets on each side of the shoe, but a double eyelet system on the three closest to the ankle helps increase support. The way is by using thick threads (Joma refers to them as elastic bands, but they are thick, non-elastic threads). The fact is that they go down the inside of this R.4000 and when the runner closes the loop, they also pull on these thick threads that close firmly helping to hold the foot, especially in the area near the ankle.

Going inside, the tongue is thick and padded. Not in excess, but it is enough to be a flier. It is attached to the body of the shoe internally, and on the outside, the laces go through a pin. All this, together, means that the reed is not going to move a millimeter while running with them. Plus, that pin is reflective, so it looks great if you’re racing in low-light conditions. 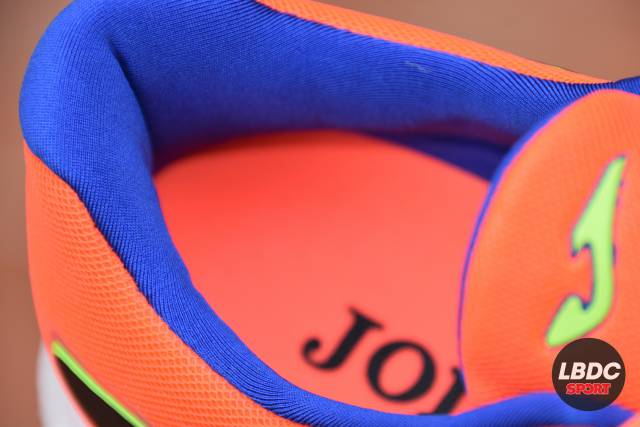 The bowl is also very thick and padded. Again this is surprising … but pleasantly, of course. The normal thing is that the competition shoes are more spartan in these details, so it is another point in favor here. And the insole: no less than 5mm thick foam, which rests on a layer of 2mm EVA material that, in turn, is on top of the midsole that we had already said that the material was soft. Come on, the level of comfort is very high, to belong to the segment racer. 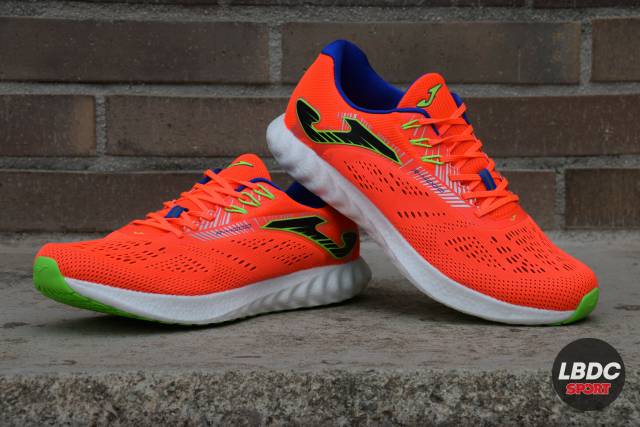 Joma R.4000 Reactive is a competition shoe with all the laws to succeed as one of the favorites on the grill. Its extremely low price helps it outperform most of its rivals in the quality / price section.

It is a great option for those looking for a Flying with a soft but very reactive cushioning and have a high level of comfort.

Thanks to a very worked midsole, with the Stabilis piece to help control the rotation of the ankle during the transition of the tread; a sole that uses a lightweight and grippy rubber like Durability; and an upper with great ventilation management…; make this Joma R.4000 Reactive a serious option for racing. And within these, one that stands out thanks to its comfort of use is the marathon distance.

The rhythms at which to use it are obviously the maximums that a @ gives, in any of its levels, although, without a doubt, the majority of shoes in this category begin to have a reason to be if whoever uses them goes at rates lower than 3 ‘ 45 “-3’50” (having as reference a 10k), for example. Which does not invalidate that someone wants to use them above those rhythms, if they want to benefit from their characteristics, obviously.