Carmen Martínez Bordiu's ex-husband was a very good athlete who always competed with Racing Santander's green socks. Today, at 54 years old, he is trying to overcome a stroke away from the pink press when he had to leave the house in the trunk.

I don't know why the other day talking to Ramón Cid his name came up.

José Campos was in 1987 the long jump champion of Spain. José Campos was an athlete who dreamed of crossing the 8-meter border. But in the eyes of the general public José Campos will always be one of the ex-husbands of a celebrity like Carmen Martínez Bordiu. A woman who was 15 years older than him, who went to live with him in Santander, next to El Sardinero, and who caused José Campos to have paparazzi 24 hours a day on the doorstep of his house waiting to see if he would look out on the street. terrace: anything, whatever.

-I remember that I would take out a sandwich, a beer, I would even go home for dinner, because seeing them there for so many hours made me feel sorry, but don't see if I didn't get angry about it.

At that time, José Campos became an extraordinarily popular character. “In the end, you get used to it but there were always 2 or 3 cars chasing us. What's more, there were times when we left the house in the trunk ”. However, none of that changed the personality of José Campos, who was that guy capable of despairing Jorge Javier Vázquez when he interviewed him on his program.

-I can't with you: there is no one to take anything from you, he always told me.

And today it justifies:

-Why are we kidding ourselves, I went to these programs to have a laugh, to hang out and to get paid, because then it paid very well.

Today, José Campos is a 54-year-old man totally removed from the pink press. He lives in Peñacastillo, on the outskirts of Santander, where he has his business, he has his wife, an anonymous woman, and he has his five-year-old daughter Martina.

-They even offered me to go to 'Survivors', they offered me a lot of things but I said no to all: that that era is over, that I had done nothing to be famous and once I left him with Carmen there was no point in him continuing there in that world.

On March 18, José Campos suffered a stroke at three-thirty in the morning when he fell out of bed "and thank goodness my wife heard the blow, got up, picked me up and called the ambulance."

José Campos is still moving forward. You still have to remember words that you have forgotten. But today, before talking to him, he went out for one of those hour-and-a-half walks in which he gets less and less tired: we move on.

José Campos prefers to speak today, instead of the paparazzi who lie 24 hours waiting for a photograph, of the day in which he was champion of Spain with 22 years in San Sebastián.

"Either you beat me now or you never beat me anymore," said Antonio Corgos, who had been winning for ten consecutive years and was already an athletics institution.

José Campos jumped 7.44 then and was first, but he remembers that “there were still seven to jump. I got so nervous that I left the stadium. I didn't want to see what the others were doing. After 20 minutes, when I returned and heard my name as champion of Spain, I did not know what to say because I had pursued that moment so much and suddenly, I came and felt that the doors were opening for me ”. 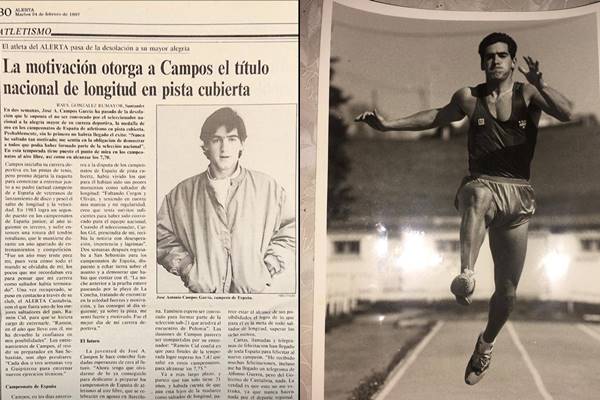 The son of a great athlete ("my father was a very good judoka"), José Campos arrived at the slopes of La Albericia for the first time at the age of 16 or 17. There, Ramón Torralbo, the man who later made Ruth Beitia Olympic gold, told him:

-Chaval, you have a great condition.

And he was not mistaken.

In his first junior championship in Spain he was runner-up. It was clear. José Campos had wood. He does not remember exactly who offered to go to train in San Sebastián with Ramón Cid: a man who had been twice Olympic in triple jump (Montreal 76 and Moscow 80).

- There were times when he went and returned on the day of Santander to San Sebastián to train with Ramón Cid. They were 400 kilometers at a time when there was still no highway. That is why there were times when, due to fatigue, I stayed over at Ramón's house.

Until he was 29, when he retired, José Campos was always a great competitor who remembers that day in Segovia when he made his personal mark: 7.77. "But just before they called me for a null that was 7.95. By this I mean that I could have done 8 meters perfectly, but that did not happen that day. I was not that lucky. Fate did not want to give it to me and, above all, I felt sorry for Ramón Cid. He would have deserved it. He crushed a lot so that I could get to eight meters ”.

“But those ten or twelve years that I was in athletics were indelible. I traveled a lot. I learned to be a better person and even dreamed of being an Olympian ”, he remembers today. "Just the mere fact of dreaming about it, that idols like Abascal, like Corgos treated me like one of their own ... Only for that I will always be grateful to athletics."

José Campos was then a different guy who always competed with the socks green of the Racing of Santander until he was signed by Barcelona, ​​where he was proclaimed champion of Spain of clubs.

-I remember that we beat Larios, which were bigger words, but above all I remember that the club to congratulate us took a game from midfield at the Camp Nou in a Barca-Tenerife. And there I was all excited and with goose bumps. I remember that I saw the game in the box with Koeman and Archibald who had not been called that day.

But he also remembers that question he heard in the midfield of the Camp Nou as if it were the center of the world:

-Fuck, José, what are you doing here?

The question was asked by Quique Estebaranz, a left winger from Tenerife who had played for Racing and who had made a certain friendship with him in Santander.

But, above all, that question reflected how far someone who in this case can go: José Campos. The boy who when he started in athletics hesitated between 100 meters and the long jump.

Time made him a jumper and memory remembers him as a jumper with possibilities. "Knowing that you have possibilities is a luxury," he remembers today, at 54, with the same peace that should help him to completely overcome that stroke that placed him in front of the sword and the wall.

-You never know what can happen to you in life. I was fine. When the stroke came, he was taking care of me like never before. I was eating healthy, I had stopped drinking socially at work and suddenly I found that task.

-For me, going down from 100 is very difficult. I am a guy with a lot of muscle, a lot of bone who at the time of competition was already having a hard time being below 80. I remember that the day I retired, Ramón Cid told me, 'you are going to gain 20 or 30 kilos', and he was right.

Since then, 25 years have passed. Time ran fast. He traveled from the sports pages to the heart press. But today you don't regret anything, "Because, in the end, everything the than pass it suits. The key is to learn ”. And José Campos learned that he would no longer change his current life with his wife and daughter for anything. And without paparazzi at the door.