The Kenyan athlete, triple world champion of half marathon, will try to reduce the 58 min 18s of Abraham Kiptum next Sunday in Copenhagen.

He needed to put the icing on the cake of a preparation that had gone "very well." The last session on the dirt track adhered to that simple training scheme practiced by coach Patrick Sang With faith, conviction and good results.

After a warming in the purest stereotypical style that one can imagine of Kenyan athletes, a jogging Quiet with his tracksuit on, Geoffrey Kipsang Kamworor swapped the shoes for the nails and stripped off his clothes. He did some straight lines and some technical exercise. They were waiting for him 10x1000m with 1min 30s rest, or the equivalent time to walk about 100m and jog another 100m very slowly. All this at an altitude of 2300m on the Annex track in Eldoret, Kenya, the mecca of world-wide athletics.

“It hasn't been anything particular, lately I've been doing similar workouts; It was just the last one before the next competition, ”Kamworor told LBDC at the end of the session.

Nothing particular for the Kenyan athlete meant doing an average of 2min 39s, with the last two repetitions in 2min 36s, and 2min 35s. In the first five he had the company of four companions, but in the last five only Marc Roig and Juan Antonio Gil, another Spanish master athlete who meets the family in the Eldoret area, helped him in stretches of 200m.

Kamworor will run the half marathon in Copenhagen in a week, this Sunday, September 15. "Now it's just a matter of resting and traveling," he explains with the peace of mind of those who trust his possibilities. "My goal is to win and try to make my best personal brand," he says referring to the 58min 54s he accredited in Ras Al Khaimah, United Arab Emirates, already in 2013.

-But how much below that mark could you walk, Geoffrey?

-I'm not sure, but something better than that brand.

-Something better than that brand would be ...? Don't you want to put a number to your ambition?

-No, not yet - says with some blush the winner of the last three world half marathon. 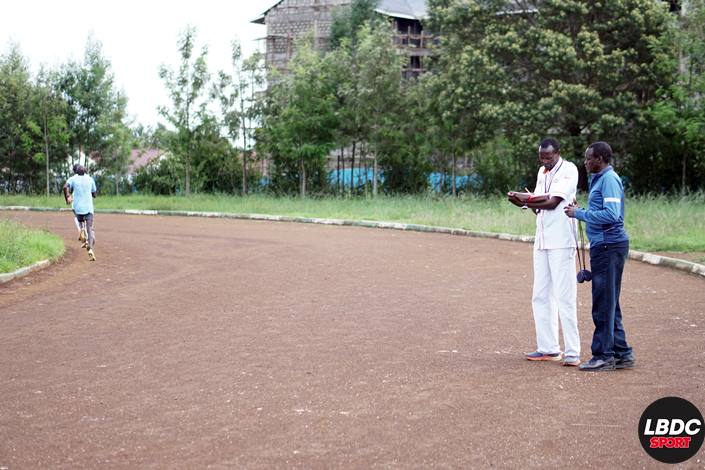 Nor does Patrick Sang loose clothing. It just says that Geoffrey wants to achieve his best personal mark, although his smile betrays him when asked if his pupil will try to beat the world record.

-Cross your fingers so that, hopefully, make your best mark and end up being something else - says Sang.

-Another thing ... - and the Olympic coach and medalist explodes in his day.

The world record belongs to the also Kenyan Abraham Kiptum with a time of 58min 18s, which means an average slightly below 2min 46sec per kilometer. He achieved it in the half marathon of Valencia last October. The record remains in force despite the controversy raised after the provisional suspension of Kiptum last April due to irregularities in his biological passport.

To overcome it, the hares will take Kamworor “Around 27min 40s as it passes through the 10 kilometers,” says Kenyan fondista, also double champion of the cross country world. That is, at a rate of 2min 46s per kilometer, for later, in the second part of the test, try to run in negative to get the universal record.

“Geoffrey has been training very well. A couple of weeks ago he won the 10000m Kenyan championship with 27min 24s, running at 1800m above sea level, therefore, in terms of training his conditions are correct. Now we will see how the competition takes place, what the weather is like, and in any case, we hope it runs very well, ”says Sang, the coach of Eliud Kipchoge.

Whatever happens in Copenhagen, and despite having qualified thanks to his victory in the Kenyan championship, Kamworor will not contest the world championship in Doha. His next goal is his favorite race: the New York marathon, where he already knows what it is to win thanks to his victory in 2017. Although, as Sang says, we will not talk about what is on the other side of the river until we have crossed the bridge .