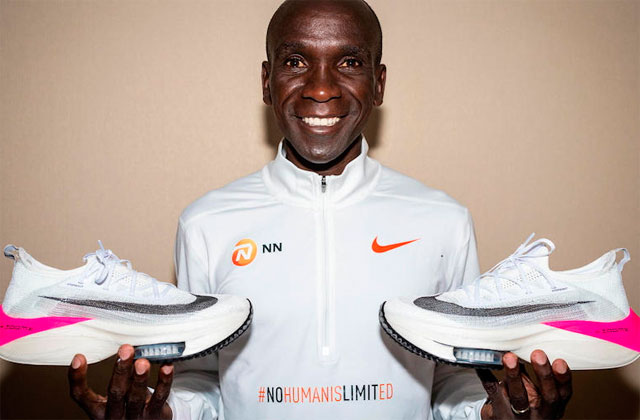 The world record holder and Olympic marathon champion, the Kenyan Eliud Kipchoge, reveals the secrets of Nike's 'magic shoes', the Air Zoom Alphafly NEXT%, the most 'fast' of the American multinational and that integrated the 'INEOS 1 Challenge' : 59 ', with which he dropped, for the first time, from 2 hours in the 42,195 kilometers.

In a documentary that delves into the training center in Kaptagat, Kenya, Eliud Kipchoge takes a tour of the birth of the most innovative model, which will go on sale to the general public this June 2 after the period open to Nike club members, for runners of recent years.

Part of his "legacy"

“I think this shoe will be part of my legacy. I have contributed my ‘feedback’ in the last six years"Kipchoge said, detailing the improvements he was incorporating to the Air Zoom Alphafly NEXT% before receiving them in Kenya from the head of the Nike footwear innovation department, the American athlete Carrie Dimoff.

The Nike Air Zoom Alphafly NEXT% combine Nike ZoomX cushioning with Nike Zoom Air cushions in the forefoot and a carbon fiber plate, which achieves a feeling of drive and less wear especially in long distance races such as the marathon.

Some ‘shoes’ who hope to continue making history

With a prototype of this model, Kipchoge came down from the two-hour barrier in the marathon at the INEOS Challenge last October in Vienna, but the brand was not considered official because the hares rotated in and out and a vehicle set the pace for them, among other reasons.

After being branded as 'technological doping' by the competition, with marketing of the Nike Air Zoom Alphafly NEXT% starting next week, Kipchoge and the rest of the pupils from his school in Kenya hope to continue breaking records on their way to the Tokyo 2020 Games, postponed by the COVID-19 pandemic.