The trunk of your car looks like a second-hand store with studs, tires, drag ...

He gets up at 7.30 to study his second career (INEF) after finishing Physiotherapy

"Going to a High Performance Center is not a guarantee, but he decides," explains Tuñas, his coach.

Condition number 1 to believe: see the athlete's eyes and listen to the coach.

Condition number 2: daring to ask questions that seem impossible and that invite rebellion, will one day you fall below 20 seconds in the 200 meters? ¿I know may do something big at the European next summer? Can you imagine yourself at the Tokyo Olympics? Do you think it is possible to beat Bruno Hortelano?

Mauro Triana is a 24-year-old sprinter from La Coruña who has 20.93 in the 200 meters, who has been an absolute international and who is already something more than a promise. His resume, in reality, is proof of what his coach Jose Carlos Tuñas imagined the first time he saw him run at El Barco.

"Watch out for him," he said aloud.

Andrés Díaz, who may have been the best Galician athlete in history, tried to convince him.

But there was no way to convince Tuñas.

Nor to Mauro Triana, who has harassed that time his coach you charge perform two blocks of two series of 300 meters with 12 minutes of recovery between each.

So this is the story of a sprinter. The tenth anniversary of a story that began in September 2010 when the athlete met his coach.

Today, Mauro Triana could represent all the anonymous sprinters of our country, all those who are there so close or so far, to everyone those than no leave of Sound and to all those who have a coach dedicated to them body and soul.

José Carlos Tuñas is that man in this story. Passionate about athletics and the word that has the feeling that things are not being done wrong:

-Every year at the end of the season he makes his best mark.

Mauro Triana then smiles when listening to his coach. A shy and polite smile like he is. This is a young man with patience to hear that He has been waiting for his moment for years, but not enough. That is why he does not give up on the most ambitious questions.

"It is not impossible to beat Hortelano because the best does not always win," he admits.

Condition number 3 to believe: to see Mauro Triana's eyes again, imagine him those winter mornings in which he gets up at 7.30 in the morning to go to university and in which it seems so easy to surrender to a more life comfortable: 'boy, you already did what you had to do', we could say.

But he likes athletics too much.

After finishing he degree of physiotherapy, Mauro Triana has enrolled in INEF which is obviously not the most beneficial for his training chronicle.

-There are practices in which, for example, I have to do 40 minutes of swimming. If I didn't have to do them I would obviously be less tired in the afternoons.

But that's what there is.

- Luckily or unfortunately, I cannot live from athletics and I have to divide the time. 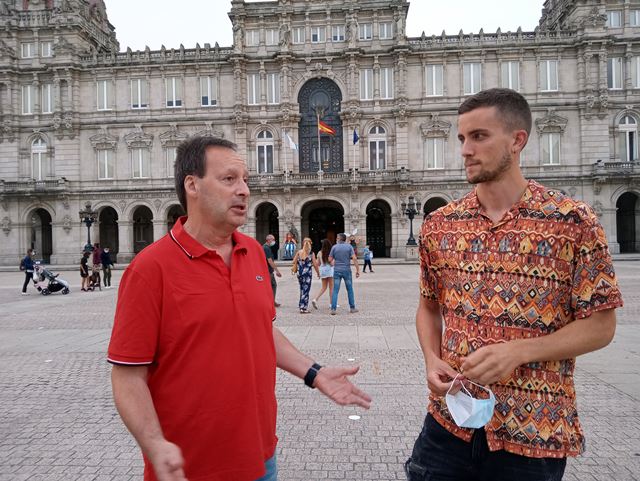 Condition number 4 for success: learn to solve equations like in mathematics, or to skip obstacles as in life because, in the end, athletics is a reflection of what happens in life: you run into problems, you avoid problems.

one) Of course we lack means

3) And, yes, we must admit that the climate here, in La Coruña, is not the most beneficial for training.

Mauro explains it from within himself:

one) The trunk of my car looks like a store of spare parts second-hand (drag, rubber, weights ...) that does not fit not a backpack.

two) I get home and usually make dinner myself.

3) "What would I need then to improve my brand?" He asks himself. "Rest more, above all."

But these are the rules of the game and as Mauro listens to him say to Tuñas "what is easy to achieve in life: I don't know anything".

What's more, since we are reminded, Tuñas always remembers that “when Jacques Piasenta when he caught Maria José Perec, who later won three Olympic golds, he spent a whole year perfecting his running technique exclusively”.

We think then that It must have been a very difficult year because patience is always difficult.

The only way to comfort her is to believe in what you do. Perhaps that is why, at the age of 24, Mauro Triana has not gone to live and train at a High Performance Center either.

-That depends on him and I will always support what he decides. But moving outside does not give you guarantees of anything. Here you have an atmosphere that is a plus and you may not find it anywhere else - says the coach, who was a long distance runner who lived in Madrid for many years, where he achieved the best mark of 10,000 30'59 ”on the Vallehermoso track.

Years ago, Tuñas returned to work in La Coruña and built a training group in which Mauro Triana, the first Galician sprinter to lose 21 seconds in 200 meters, is its great exponent.

The athlete has a head and has an illusion that, after listening to him, can be summarized in these three ideas:

one) At 24 years old, he respects the guidelines of his nutritionist one hundred percent except when he finishes a training cycle, when he then goes to eat sushi.

two) Weighed every day before going to bed, and the maximum variation is 200 grams.

3) His coach has taught him not to obsess over brands. Everything is more natural: they never talk about brands.

Conclusion: Mauro Triana, if he is not injured, has plenty of reasons to be brave and to continue receiving ambitious questions and who knows if one day, before the start sounds, when looking to the right and left he will see Guliyev, Quiñonez , Gemili… why not Noah Lyles: he's here to try.

His coach estimates that he has at least ten years left.

His coach José Carlos Tuñas is the same one who defends that “in each final there are eight lanes that represent a way of understanding athletics. We are not going to settle for saying, ‘this is very difficult’, but we are trying to make one of those ways ours one day ”.