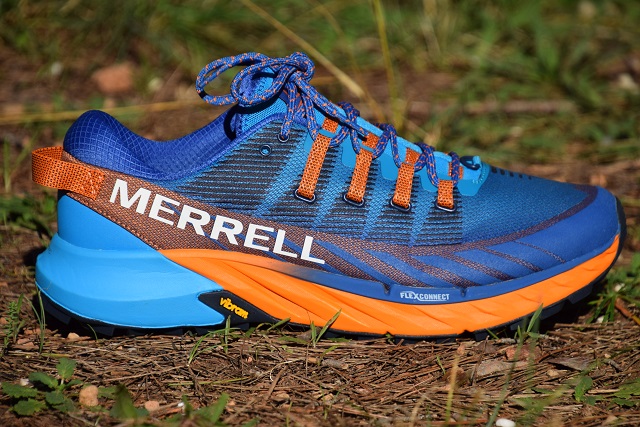 We analyze Merrell Agility Peak 4, the new installment of this versatile trail running model that comes with changes in all its parts. Especially in the sole, where Merrell has cut short the problems he had with the previous Agility Peak 3 and several cases of studs that came off their site.

The Italian brand Vibram has entered the rag by participating directly in the design of a new sole that solves the problem by being manufactured in one piece, completely ruling out the division into segments of the previous version. With the dog dead, the rage is over, they say … 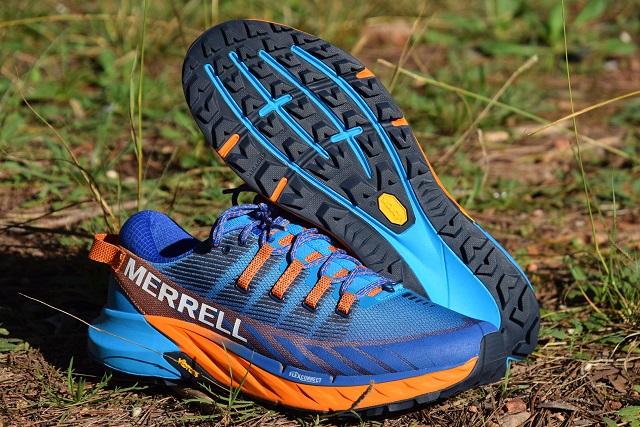 The fact is that Merrell has wanted to improve it in several areas, for that reason, the American brand founded in 1981, has decided to renew the sole looking for durability, the upper, going further in comfort and lowering the weight. In passing he has given it a review to give it another external appearance.

The versatility of Merrell Agility Peak 4 is given because it will move well both in great or very long distances (we are even talking about ultras) or in medium-distance races, where you want to go fast, thanks to the fact that it weighs 290g (dropping a lot from the 314gr of the previous finish), but also on technical routes, thanks to the grip of the sole or the excellent support. Let’s see how they have done it. 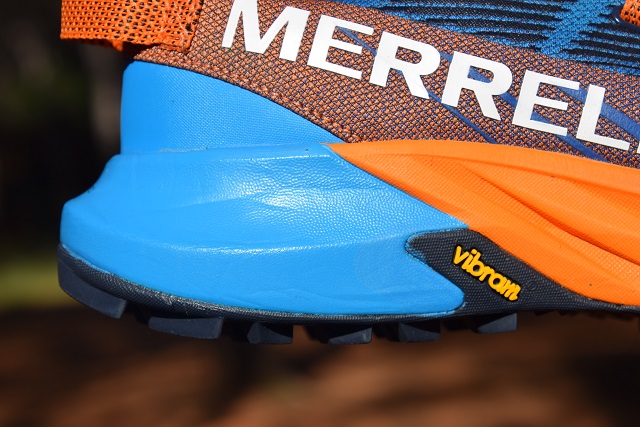 If almost everything has been renewed in this model, the midsole of this Merrell Agility Peak 4 is not far behind and now the FloatPro foam with which it is made has a more porous, lower density, looking for extra cushioning, but also more comfortable . The lightness of the material is another of the achievements for this new installment, and helps make it more versatile.

It is the case that there are two different densities and very easy to see, since, as brands tend to like, Merrell has painted both finishes with different colors. Thus, the densest cushioned foam (52 ​​°) is found in the heel and is blue in the photos, while for the rest of the entire midsole (in orange), it is the same foam, but with less hardness ( 48 °). 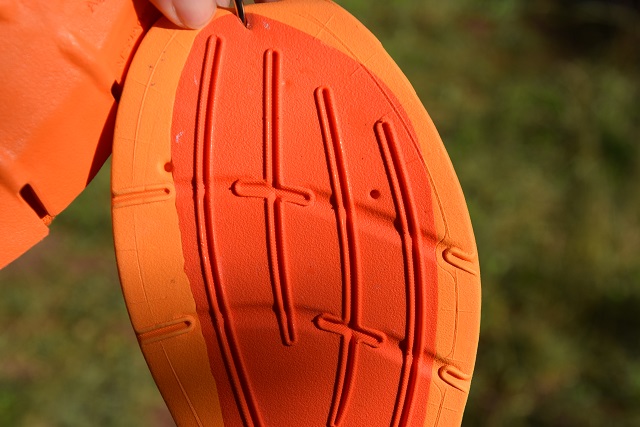 Nowadays there is a lot of talk about the plates in the midsole. This Agility Peak 4 does not incorporate one as such, but Merrell has reserved a space for the ventral area of ​​the forefoot where this foam is also denser so that it resists more the effect of pointed elements such as stones, rock points or knots of estate. 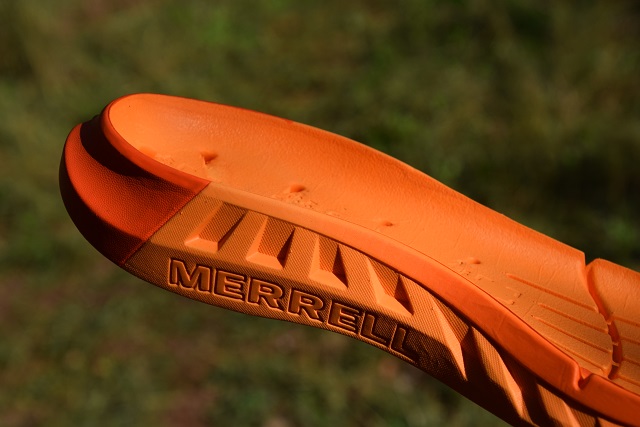 The drop repeats in the 6mm. It is somewhat low, but following the trend of recent years, which has evolved less, and this Agility Peak 4 is no exception. That 6mm drop It is a consequence of a high 30mm heel and but also a thick forefoot: 24mm. 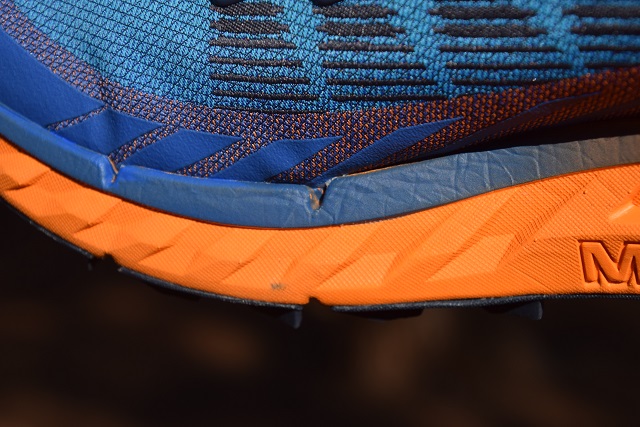 A detail of Merrell Agility Peak 4, but that can go unnoticed, can be seen on both sides of the shoe, at the metatarsals. They are two cuts per side, as I said, barely perceptible, but they have a very important function: Merrell has sought for the shoe to be flexible (in fact, the inside of the sole is not visible, but after analyzing a breakdown, it is not compact and follows the shape of the toes), and those two cuts, notches, rather, are at a point of maximum flexion of the shoe: the metatarsals, well, those notches allow the material to flex much better (If you take the shoe and flex it with your hands, this effect is perfectly appreciated). This undoubtedly helps the shoe adapt better to both the footprint and the terrain. 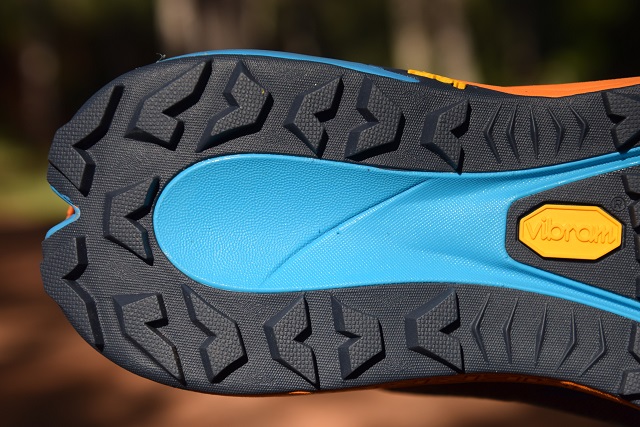 The Merrell Agility Peak 4 sole is where they tell us from Merrell that they have put in many hours to improve it. Nobody likes that a customer complains about problems in one of their products and Agility Peak 3 gave a complaint about a block that had come off.

Merrell has cut the problem clean: he has abandoned the sole system by segments (origin of the problem), and has locked himself in with the Italians of Vibram (perhaps the most reputed manufacturers of trail soles that are currently) to give birth a new one-piece sole, without sections. 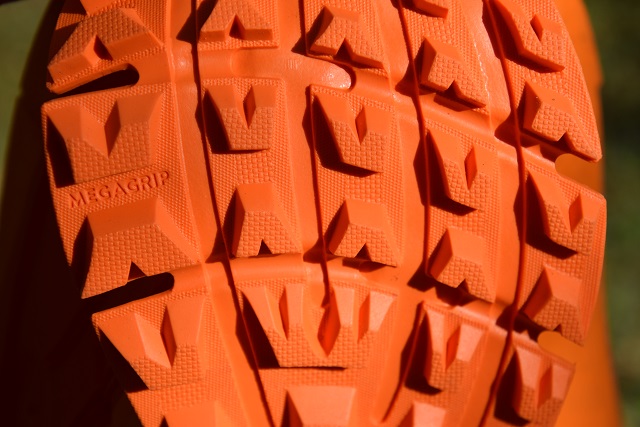 Therefore, design aside, the material used in Merrell Agility Peak 4 is Vibram Megagrip, a type of solid rubber with a high ratio between grip (not only dry, but also wet) and durability. That the studs are 5mm abounds in the idea of ​​obtaining a good grip on any type of surface without fear of anything (roads, snow, dirt, mud …).

And the fact that the taqueado is pronounced, but numerous, without excessive gaps between them (as for example it happens in a competition shoe, even from VK, such as Merrell MTL Long Sky), make it more versatile, and at the same time more durable. 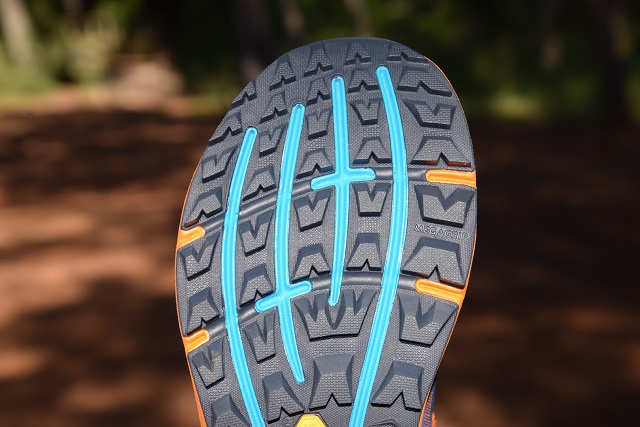 One aspect related to design is the part under the fingers. The stud follows the shape of the metatarsals, facilitating the movement of the material according to the support, which makes it tremendously adaptable to the terrain, especially if the support is done with only part of the foot (of course, this on roads and trails without difficulty does not it is appreciated, but yes if the terrain gets steep).

The transverse stripes in the goal area, to aid flexibility, or the inverted studs (countergrip) of the heel to grip better on the descents are other technical solutions that Merrell does not skimp, although perhaps they go more unnoticed compared to the other solutions. . The Merrell Agility Peak 4 upper has not only changed in the aesthetic aspect, but also a little at all levels, with the support being the one that follows the previous line the most, although also with nuances.

The tongue does not stand out for being very padded, but it does for being attached to the body of the shoe without any fissure, to prevent any small object, no matter how damned, from infiltrating where the foot and becoming a problem. Those small stones or even sand will stay there, in that space between the tongue and the outer mesh, deactivating a possible annoyance that will force us to stop.

Continuing on the inside, a relatively thick insole (4.5mm) made of spongy material will help to provide that important feeling of comfort in a shoe that has to cover long distances. It goes with the bowl, which is soft and bulky, to hug the ankle all the way around, filling the gaps, also comfortably. 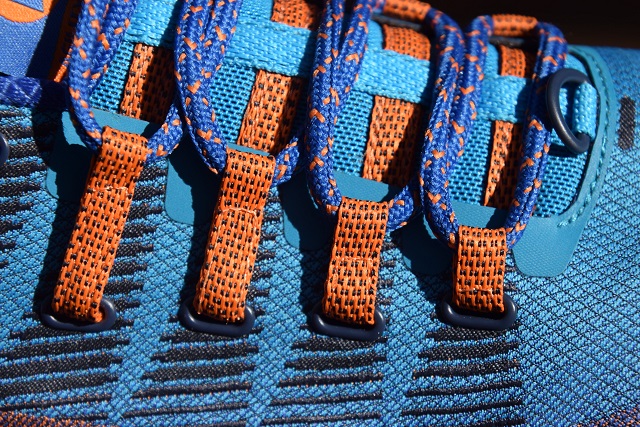 The support is kept at a high level thanks to the straps (up to four) through which the laces are passed (by the way, semi-round). They pass at mid-height through a kind of eyelets that, in turn, connect with some thread reinforcements with the sole purpose of holding the foot firmly and being safe. 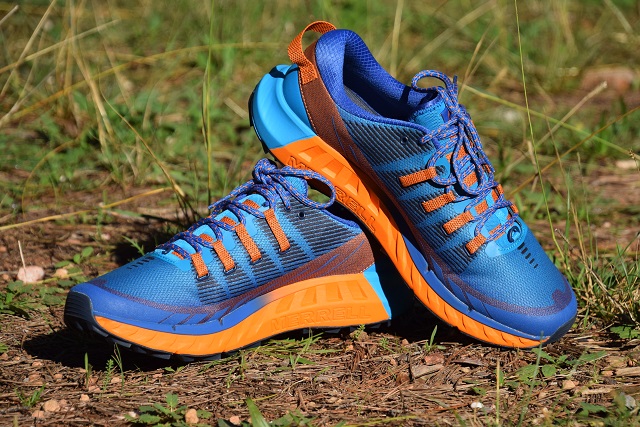 The mesh is of the Jaquard type and its peculiarity is that the fabric is designed to resist snags, pulls or punctures of small typical understory branches or even small edges with which it rubs. It’s not indestructible, sure, but it will at least resist a lot more than just a ventilated mesh. 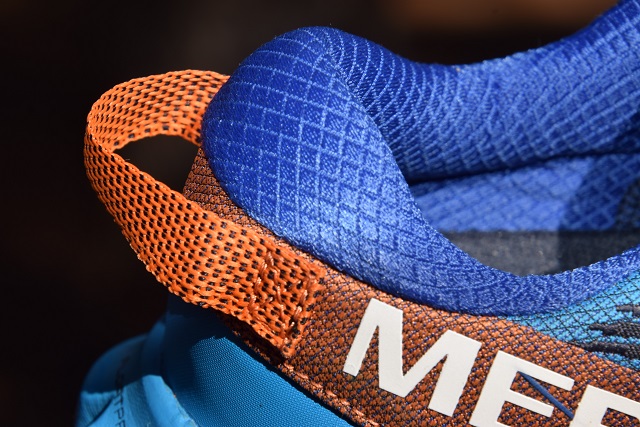 The heel counter helps to contain and stabilize the ankle, especially if it is heel when running, which is quite likely when we have been running for hours. It is finished off with a practical strap, with enough gap, to be able to put on comfortably and quickly, just facing the foot and pulling the shoe. 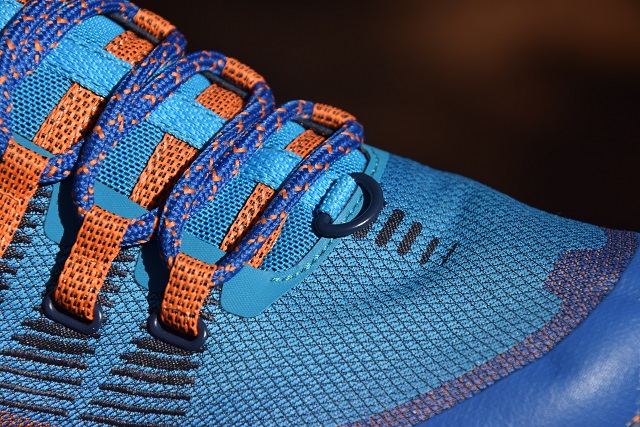 Finally, we must explain the reason that there is a small ring on the front of the shoe, right between the laces and toes. As this model is also designed for ultras, and that they can take anywhere, Merrell has planned to equip Agility Peak 4 with a ring to hold a gaiter, in case it is necessary and have maximum protection against external elements such as sand. 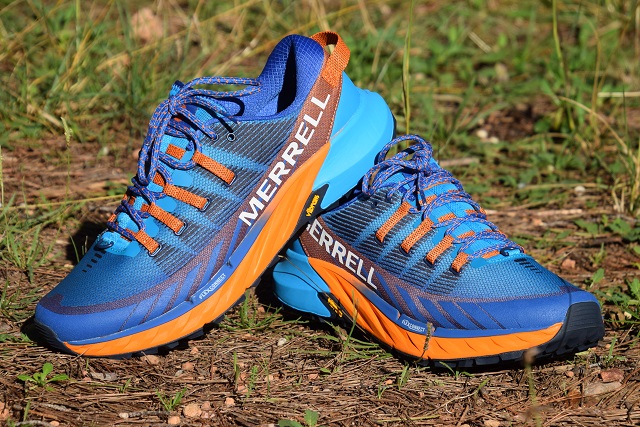 The revamped Merrell Agility Peak 4 is a trail running shoe valid for training and to compete in endurance or ultra endurance races. Thanks to their low weight, it is also possible to use them in medium distances where you can squeeze something more, but without a doubt, thanks to their comfort, lightness, cushioning and durability, you will get more out of it in the long distance.

The fact that Merrell has configured that prominent heel and with a somewhat greater hardness than the rest of the midsole, already says that those who run with the heel or who, as a result of the wear and tear of hours in the mountains, will benefit. at a more comfortable pace and in which they will have a plus of stability.

And although long distance is its ideal use, is well equipped for technical areas and where they are required in every way, especially cushioning, traction and support, if squeezed. This is thanks to a very careful midsole, which follows the shape of the foot; a sole made with Vibram Megagrip; and a strong upper with excellent support.

Another feature is that it is a versatile model also for those who wear it, from light weights to high weights, since it is prepared for it. Of course, those who have a narrow ankle, may have to pull the last buttonhole, to perfect the fit. Without a doubt, a serious candidate to enter the list of the best trail running shoes.

Of course, speaking of ultras, competitions, long runs … perhaps this is not a model for those who make sporadic or unpretentious outings, and therefore perhaps something else fits better in the line of the best trail initiation shoes.