News : Mess with the selection of athletes for the World Half Marathon

Controversy around the list of those selected to represent Spain in the Gdynia World Half Marathon (Poland) to be held on October 17. This the 24th World Championship It is the only international World Athletics competition that has managed to stay on the calendar, so it will be the first time that athletes will wear the Spanish team’s kit officially after the pandemic.

In an official statement issued on Tuesday, the RFEA assured that “three women and five men have been shortlisted, after meeting the criteria established by the coach and the RFEA Sports Directorate. Athletes and shortlisted athletes are Marta Galimany, Elena Loyo (2020 Spanish half marathon champion) and Laura Mendez, while athletes are Antonio Abadía, Jorge Blanco, Ayad Lamdassem, Adel Mechaal Y Juan Antonio “Chiki” Pérez. The women’s competition will start on Saturday October 17 at 11:00, while the men’s competition will start at 12:30 ″.

Controversy with Camilo Santiago and Arrospide

The mess has come with the men’s team. One of the nine athletes who had the minimum for a long time, the Riojan Camilo Santiago, has finally been left out of the call in a system that has generated some controversy. According to the newspaper ‘La Rioja’, the Spanish Federation had published, on September 15, the selection criteria for the World Cup and that circular included a test of 15 kilometers on the track that would be “taken into account as a criterion additional to prepare the definitive preselection ”, as the text explains. Camilo considered that his previous merits did not need that ‘additional’ support because his selection did not offer doubts.

In fact, Santiago participated on September 20 in the Barbastro Half Marathon to ‘prove’ his fitness. But two days later, on the 22nd, the RFEA announced that this 15km track test on the 26th in Seville was mandatory. Camilo had to react quickly to travel to Seville and participate for the first time in his life in a track test. Everything, with the preparation aimed at the Half Marathon in October and the Valencia Marathon in December. Obviously the result was not good and it has finally been left out.

“This test is made to admit some athletes and leave us out to others. It is not logical that a test for a half marathon is done almost without warning and on a track. I didn’t even have running shoes because I had to put nails on, and they wouldn’t let me run with mine for road training, and not only with the ones we had minimal, but with a lot of people. Would anyone see it logical that a test for an open water swimming test was done in a pool or that Nadal tested himself in table tennis? Now people go to the World Cup who have a mark almost two minutes worse than mine. Racing on the track is very different from doing it on the road, ”Santago assured.

Toni Abadía, who has been pre-selected to travel to Poland, has also criticized the RFEA’s way of working on his Instagram account. “Sometimes it is difficult to understand certain things, such as not seeing Iraitz Arrospide in the selection having the minimum participation (1:03) that was changed to 1:04 later”. Arrospide is another of those harmed by all this. The mess is served. 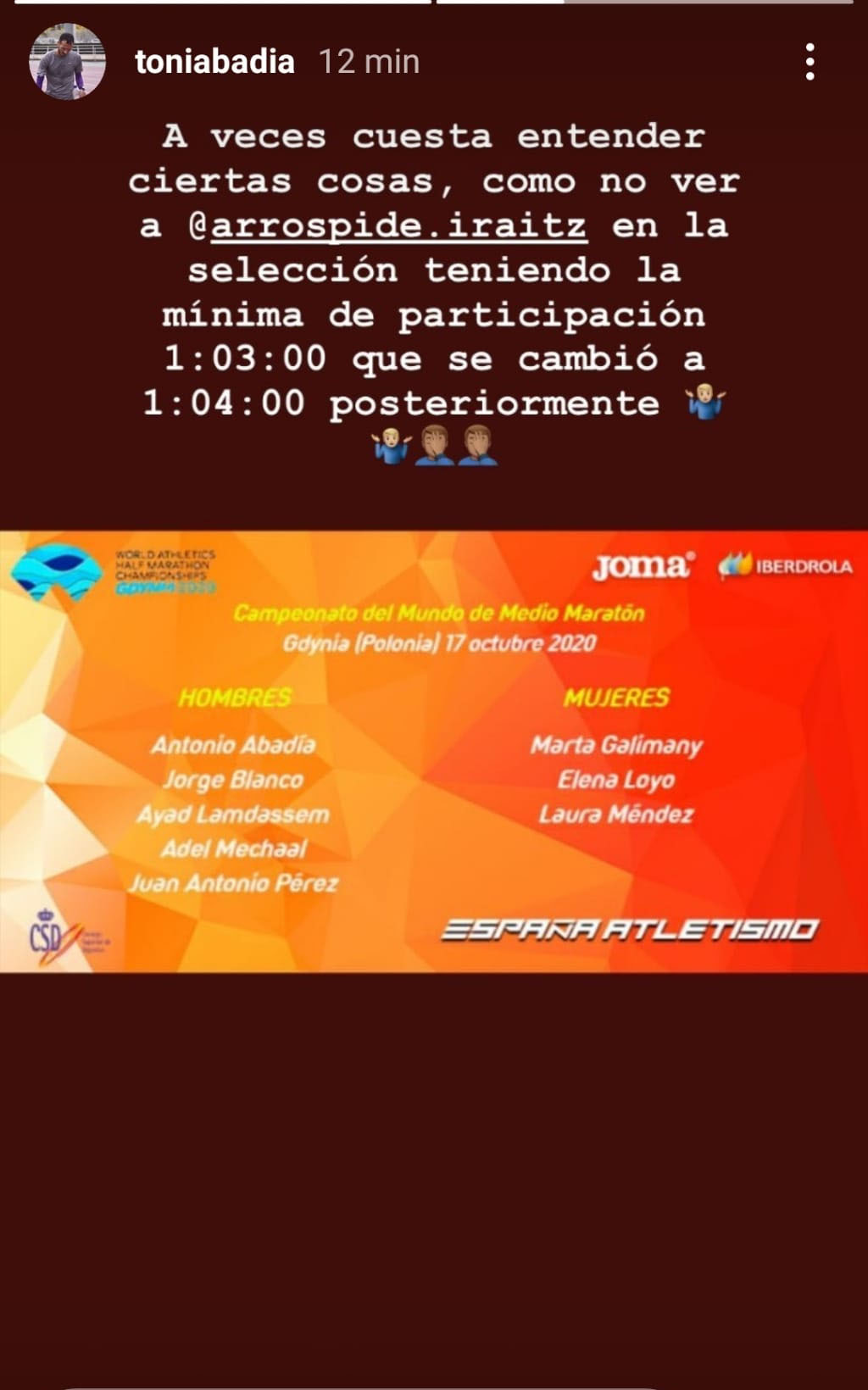