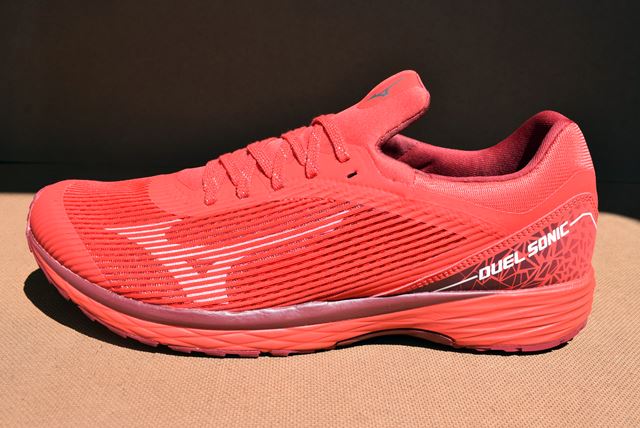 Mizuno Duel Sonic already says, from the box you're taking it from, that its features are exclusively focused on competition. This is what flying shoes have, that their reason for being is to put into practice everything trained for weeks, months ...

Mizuno is one of the brands that understand this element the most. Its roster of flying shoes is extensive, with several models per season where other brands have one or two at most. We are witnesses that, especially in the field of competition shoes, Mizuno is also in continuous renewal of models. If it is often said that Japanese brands are reluctant to change, this in general, and in competition shoes in particular, breaks the topic. 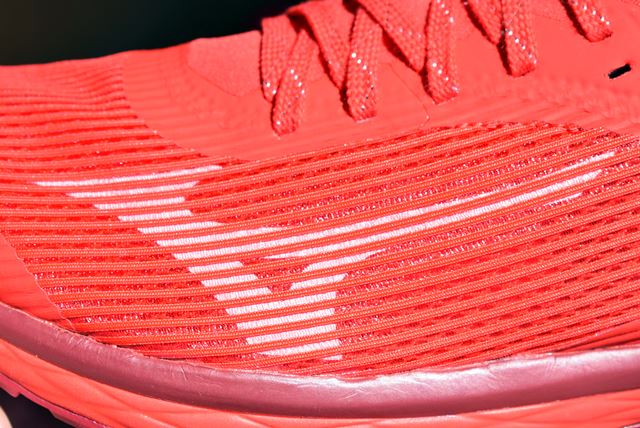 Do not confuse Duel Sonic with Wave duel, brand partner and even silo (competition). Neither with Wave Sonic ... Let's see, Mr. "Mizuno", keep in mind, there are those who can make a mess with these names: Wave Duel - Wave Sonic - Duel Sonic. Three different shoes that have in common (apart from a very similar name between them) the warrior spirit that is expected of a shoe that is asked for the maximum in terms of speed. 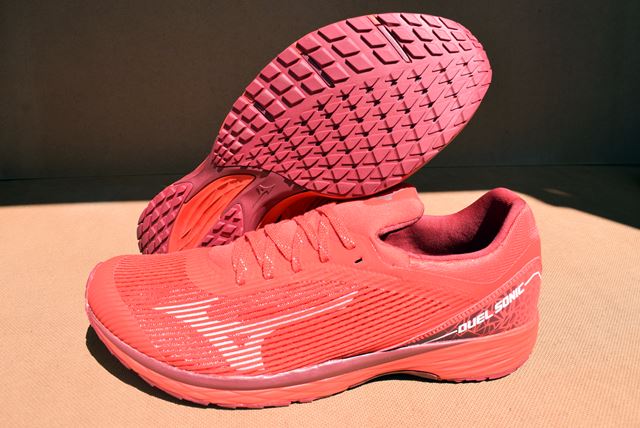 Of course, Duel Sonic is easy to recognize: it is striking as soon as you see it because of the novelty of the upper, thanks to the absence of a tongue and that the entire shoe has an ankle boot structure. With adjustment by laces, that is not missing, as we will see in the upper section or upper cut.

Such a flying-shaped sneaker weighing only 220gr for the male finish and 190gr for the female. Let's go with it. 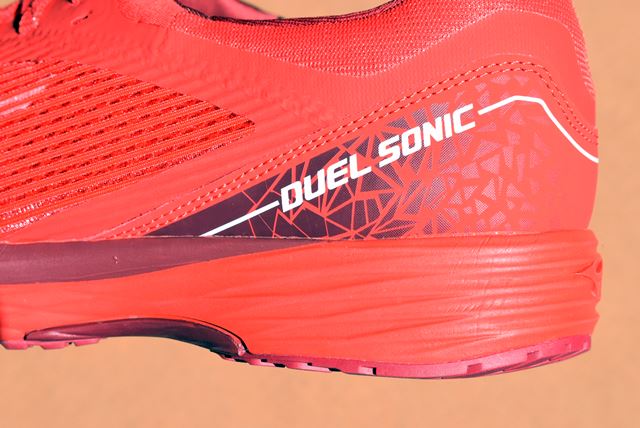 The Mizuno Duel Sonic midsole, despite its low profile, comes well armed in terms of materials and technologies. It uses a high-end material such as U4iCX, developed and patented by Mizuno. It is located just under the entire sole of the foot and along the entire length of the shoe. This is a high-end material 36% lighter than a standard EVA and is primarily responsible for cushioning, reactivity and durability. 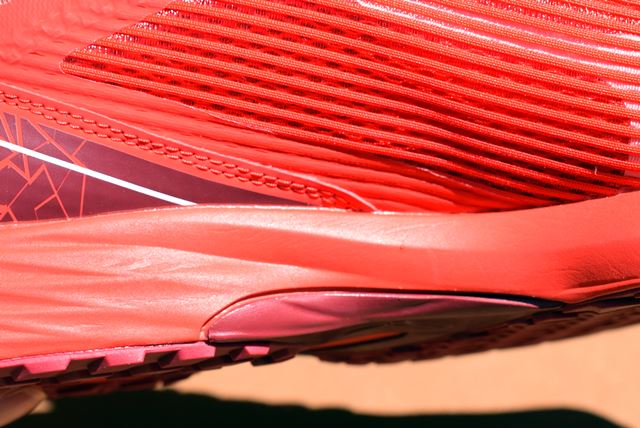 Before I spoke of a low profile, and that is that Duel Sonic has heights of 21mm in the heel area and 17mm in the forefoot. This gives, on the other hand, quite a low drop, even for a competition shoe: 4mm.

He “Racing” spirit lor puts the Duel Plate technology, Mizuno's own. It is a plate, but not carbon, which now seems that everything has to be of that material. No, it is a rubber, much more rigid than usual, and which is located in the area under the metatarsals and the sole. In fact, Mizuno has left more than 30 small holes in the sole to make this plate something visible and that people know what they are paying for.

It is located under the metatarsals, just the area where the impulse for each step is concentrated and it is in charge of facilitating the forward exit in each stride. Going out fast, looking to throw the foot, over and over again, is going to be your mission. 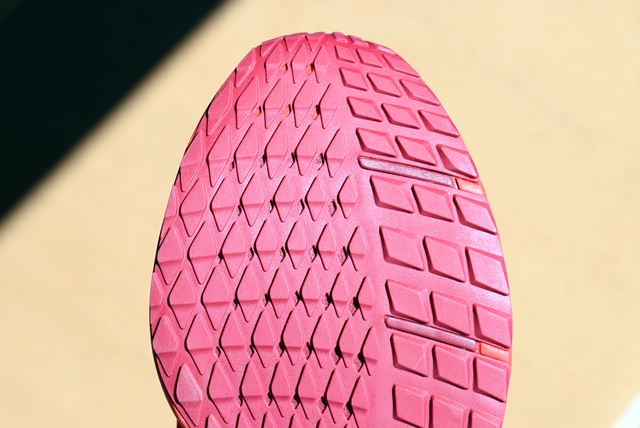 The Mizuno Duel Sonic outsole uses a solid rubber with great durability. It is X10 and it is a rubber that is only used in high-end shoes, since carbon is added for maximum resistance to wear.

The way the sole is structured is defined by two large differentiated areas: the back (under the heel) and the front (under the metatarsals). Both are joined by a piece that aims to control the rotation of the ankle during the transition of the tread.

The distribution and shape of the studs is curious, but following a series of logics. When looking at the shoe from the sole, it looks like a half symmetrical distribution. What I mean is that the studs on the inside of the metatarsals are the same as those on the outside of the heel. Both areas are the ones that intervene the most during the tread, both when landing and when driving, each of them. 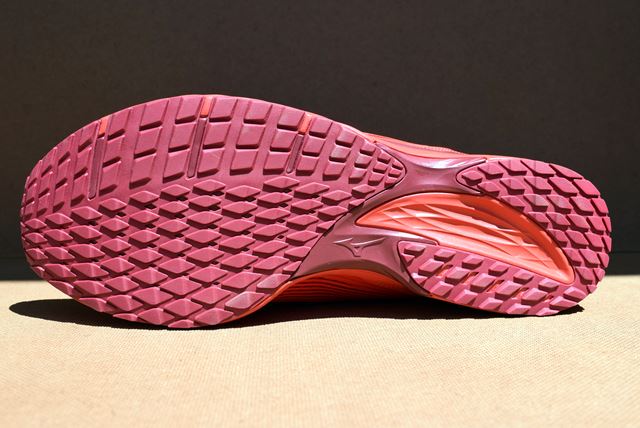 On the other hand, the other two parts no longer have as much relation to each other, so the internal studs of the heel are small and those of the external part of the metatarsals. Here they are larger and are combined with flex grooves to facilitate the transition of the tread. 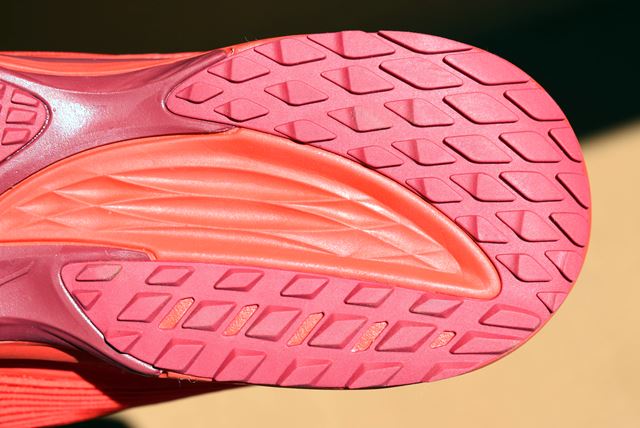 Just below the ankle, in the center of the sole, there is no rubber. This is because normally the solid rubbers of the soles are heavy materials and here it is not so necessary to use them. This saves a few grams of weight. 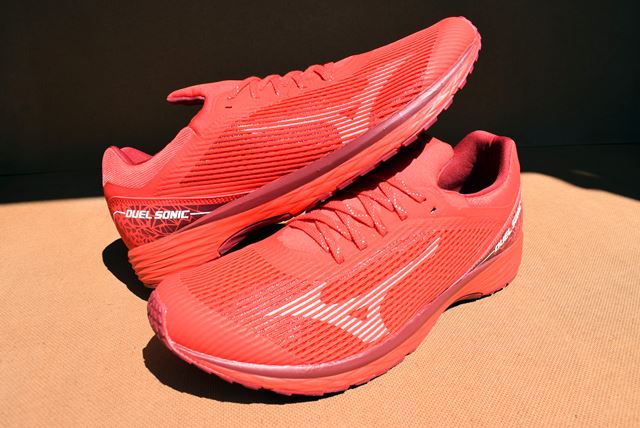 The upper of the Mizuno Duel Sonic is a mixture of a sober appearance and clear innovation by the Japanese brand. The sober appearance is provided by the soft lines that the Airmesh material hardly changes and has a very defined shape. The innovation is in an intelligent use of the two layers that normally has a superior cut, to create this time a very unusual booty structure in competition shoes.

All those longitudinal lines are part of the outer mesh. It gives consistency to the fit, leaving the space between the numerous strips for breathability. Through them we can see the inner mesh, all perforated. 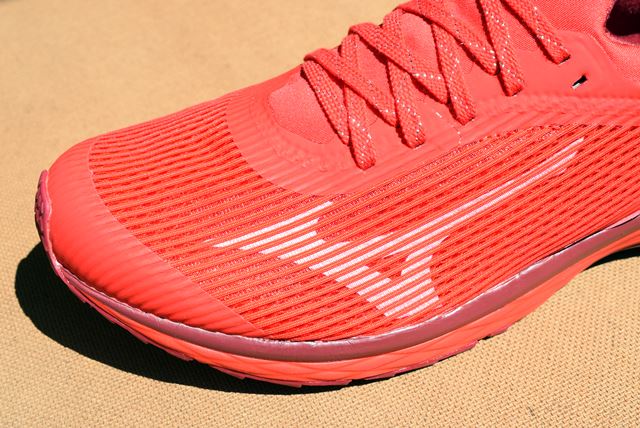 To give some packaging, Mizuno has placed its logo, the Runbird between the two layers in a rather elegant way. Elegant and practical, because the trick here is to place it in the form of a heat-sealed strip, adhered to the inner layer, which gives packaging to this area of ​​the foot that needs more support than the rest of the foot.

Of course, that heat-sealing allows less ventilation, but only at that point since breathability is excellent on the rest of the foot, especially in the most important part: the toes. 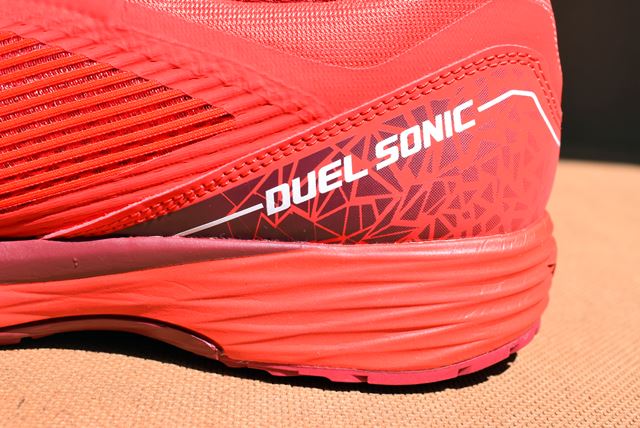 From behind, it is surprising that in such a light weight shoe, the buttress that serves to stabilize the ankle when impacting with the ground is so consistent. Brands typically sacrifice this technical resource at the stake for grams of weight. You could say that it is one of the easy devices in a flying shoe: loading the heel counter. Mizuno, not only maintains it, but its consistency, along with that of the rest of the shoe, should serve as a purchase argument to those who want them for longer than short distances. 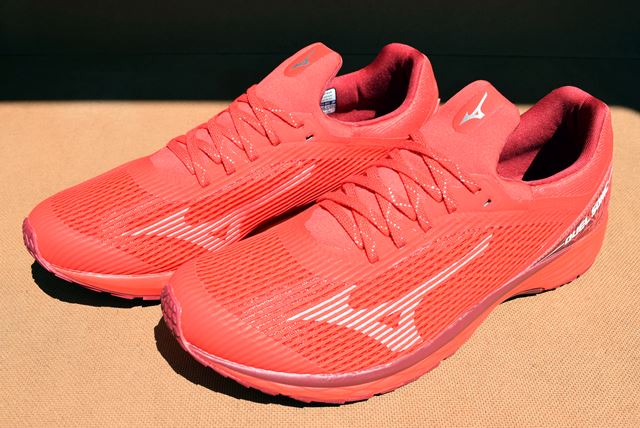 The laces are still there, because even if it is a shoe with an ankle boot structure, the fit is paramount. These are flat laces passed through five eyelets, leaving a sixth for those who want more tightening around the ankle. The (almost non-existent) tongue has the sole but important function of acting as a shooter when putting on the shoe (it must be pulled to open the bowl as far as possible and insert the foot). Inside we find a removable insole of an amazing 3.5mm thick padding.

Mizuno Duel Sonic is a fantastic competition shoe prepared for all types of distances, even the longest, thanks to a very careful cushioning, a powerful sole capable of working on mainly asphalt surfaces, but that will not detract if the race is diverted by dirt roads without complications. Also due to a very careful upper that protects the foot as evidenced by the heel counter.

Valid for explosive rhythms and worked legs, They can also be used in quality training (split, such as series or progressions or fartleks) where they can be put to the test in order to take them to compete later.

The profile of the runner to whom it is aimed should be those who are capable of carrying high or very high rhythms and preferably have a low or medium weight. Of course, they can be used at calmer rhythms (they would be losing potential) or with some heavy weight (better only for short distances). And it is that the use of this plate in the midsole to favor a quick exit in each transition of the tread, already indicates that it is designed to be exploited based on rhythm and speed.

I don't think anyone who doesn't run, clearly or very clearly, below 3'45 ”-3'50” will bring out 100% of their potential from Duel Sonic. In any case, Mizuno has another shoe like Wave Rider that moves very agilely in what is around 4 'thousand and from there upwards, taking other models like Wave Sky or Wave Skyrise for more modest rhythms, mainly training or if he takes them to some competition on Sunday.

Returning to Duel Sonic and its stratospheric 220gr in the men's finish and 190gr in the women's one, it is that it also uses a fairly low profile, with an even lower heel than other shoes in the front area (heel: 21mm and forefoot: 17mm ) and a 4mm drop that will require the muscles of those who use it.

The addition of a rubber with carbon on the sole, or what is the same: Mizuno's X10, or that Airmesh upper with no excess elements help make this shoe a very efficient flyer.

The official price of Mizuno Duel Sonic is € 125. 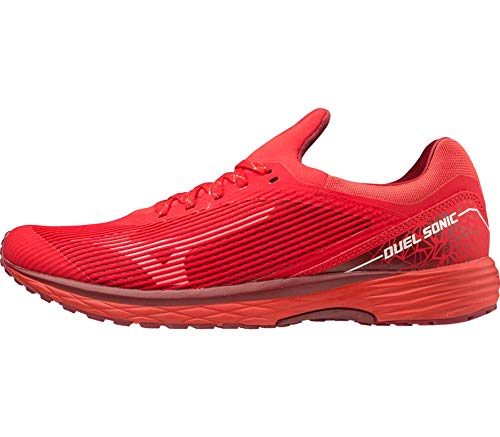 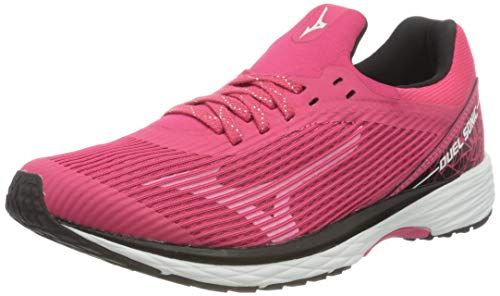