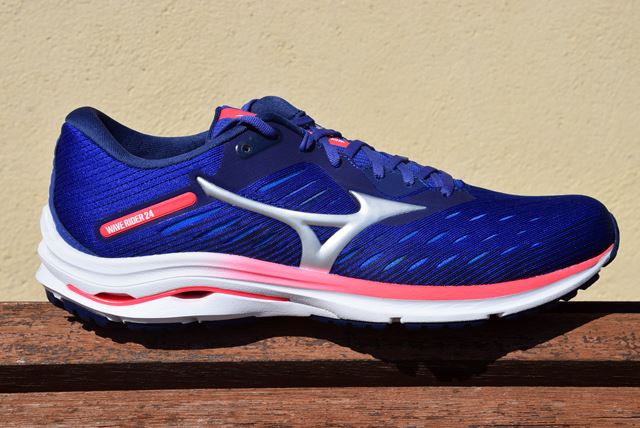 We analyze the characteristics of Mizuno Wave Rider 24, one of the best daily training shoes that also comes with very important news. The surprising Mizuno Enerzy technology lands for the first time in a model that always appears in all the relationships of the best running shoes, in general, or in the subcategories in which it is included, such as daily training, better cushioning or better shoes for neutral tread.

And there is no other than to return to the numbering: 24 !, to show that, when something works, it is maintained over time. Slippers have fallen along the way, but "the Rider" remains there, and it is not by chance, of course. 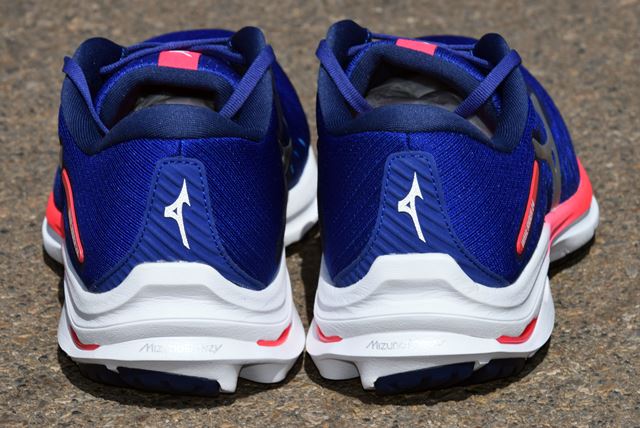 It is true that Mizuno puts the best materials and technologies in this model, hence its cushioning is one of the best and its sole one of the most durable. And now, with Enerzy in the midsole, This is the Rider with the softest cushioning that the Japanese brand has ever made. The lightness is another of its strengths since, even being a training shoe, it does not exceed 300gr, remaining only 290gr in the men's finish and 260gr in the women's. 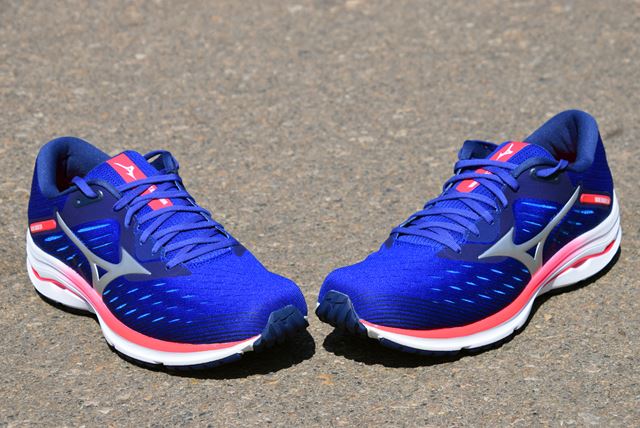 But in what matters (running), its versatility also stands out, since it is used both to train comfortably and for days in which agility is necessary, since this is one of the versatile models par excellence.

We go with all the details. 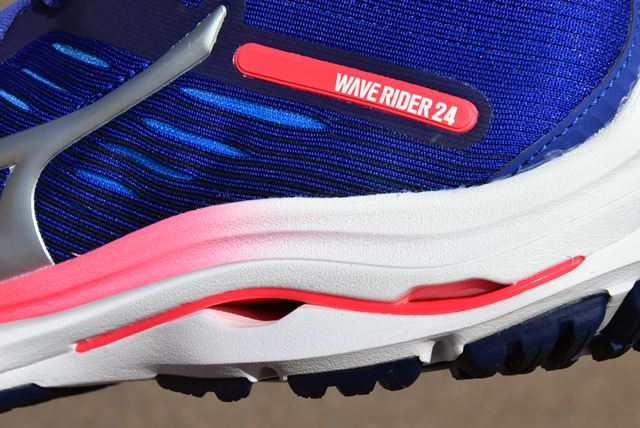 Mizuno Enerzy. The main protagonist of the Wave Rider 24 midsole is undoubtedly this new technology in the form of a compound that greatly improves the performance of any other previous midsole. It is not a way of speaking, the numbers indicate that it is so, and also, they say that by far: damping increases by 17% and energy return by 15%.

It may seem that the midsole has not had changes, but it is not like that, since not only part of the material changes, but also the design of an element as important as the wave plate, and which is responsible for improving cushioning and providing stability . 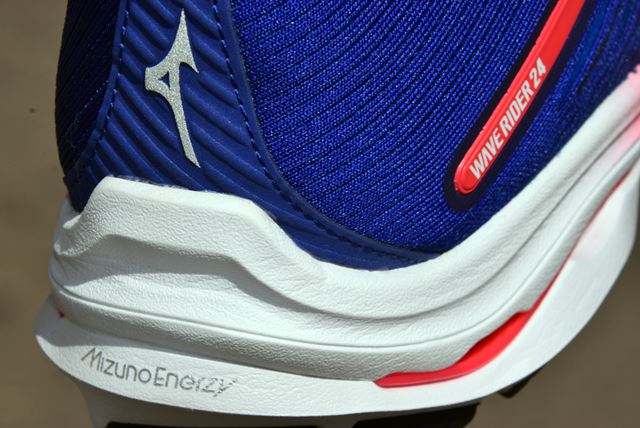 Mizuno Enerzy has displaced the tremendous stuff that is U4iCX. Wave Rider 23 used a combination of U4iC and U4iCX and now Wave Rider 24 is U4iC plus Mizuno Enerzy. I am going to explain the midsole as if it were a sandwich: The top piece of bread (closest to the sole of the foot) would be the U4iC material and it is distributed throughout the entire length of the shoe; the bottom bread, it would be Mizuno Enerzy (occupies from the heel to the beginning of the metatarsals); And in the middle, what would be the sausage, is the Wave plate, which also evolves and goes from having pronounced undulations to being more flat.

As both materials are white in the analyzed finish, it seems difficult to distinguish them with the naked eye. If anything in touch, with fingers and finesse, it is relatively easy to notice how they deform in different ways when pressed. The big difference, also in touch, comes when they are on their feet, and running, where the change compared to Wave Rider 23 is really appreciated. 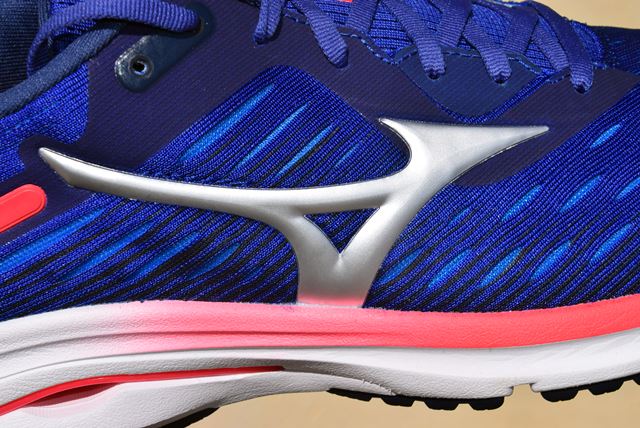 U4iC (“euphoric” 😉) is a polymer that at the time already improved Mizuno's advanced AP +. U4iC is 30% lighter than that and without losing a bit of cushioning or durability. In fact, it is cushioned, comfortable and durable.

Mizuno Enerzy for its part, works the same damping characteristics being tremendously soft, reactive and durable. Unlike U4iC that takes the entire length of the foot, Enerzy goes from the heel to the base of the metatarsals, that is, where most runners impact and end up landing with more force. 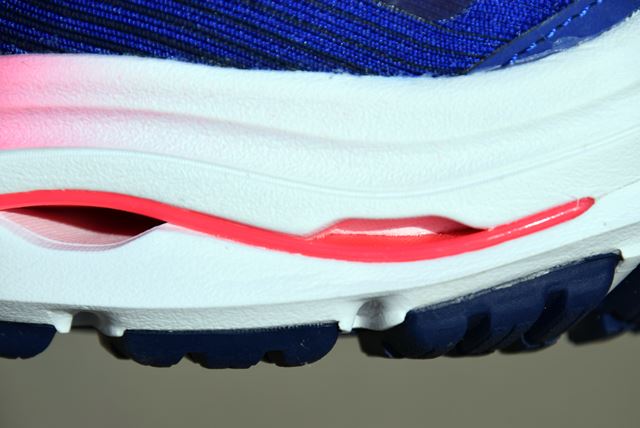 The Wave plate remains, which helps in cushioning and stability of the tread. Comparing it with previous editions it is smaller. And not only that, the more or less accentuated wavy shapes go to a softer design, in the line of a Wave Rider 24 that will be the most comfortable of all.

The only thing that has not changed about the midsole of the new Rider is the drop, or difference in height between the heel and forefoot, since it remains at 12mm. 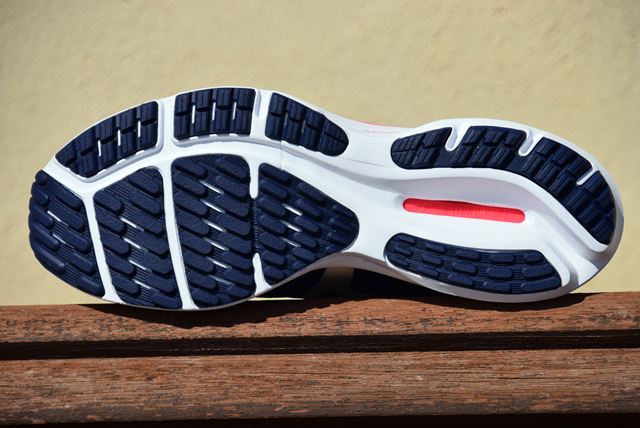 The sole of the Mizuno Wave Rider 24 also changes compared to the previous edition. Those from Osaka have preferred that this time there is a little more surface in contact with the ground. And considering that it means they've stuffed more rubber into the sole without adding a single gram of weight, that means they've fully optimized other parts of the shoe. It seems silly, but it is not: putting in new materials, or improvements and that a shoe does not gain weight is a brutal engineering job. 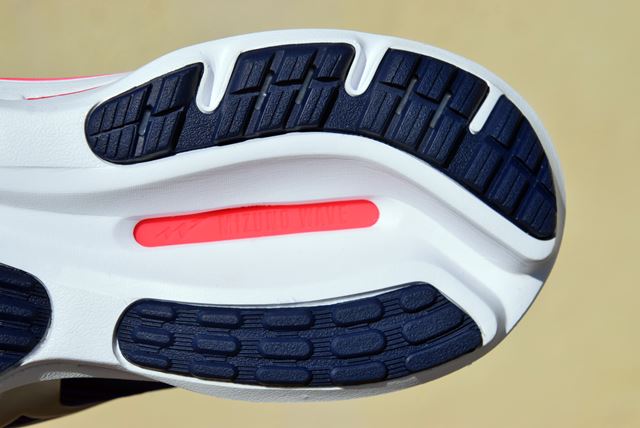 The material used is X10. It is the best that Mizuno has in terms of durability since, to the high quality solid rubber, it adds carbon to be much more resistant to the abrasion produced by the continuous rubbing against the ground. It is combined with a micro-expanded rubber under the metatarsals for high grip and softness.

The design is very interesting because where it may seem like a simple sole, I see a lot of appreciable technical resources.

First of all is the horseshoe-shaped heel. This shape allows the heel entry (the way most people run) to suit any runner equally well. Then there is that "horseshoe" is divided into two pieces, this is because to a greater or lesser extent: everyone hits first with the outside of the heel, so that it is separated from the rest will make that first impact be managed in a softer. Even more without leaving here: that external part of the heel is, in turn, divided into four blocks, filleted in turn into strips of small blocks. This is insane of detail so that the material deforms little by little at the moment of impacting the ground and that is not to touch and flatten abruptly. Smoothness, smoothness, smoothness, in just a few centimeters / millimeters. 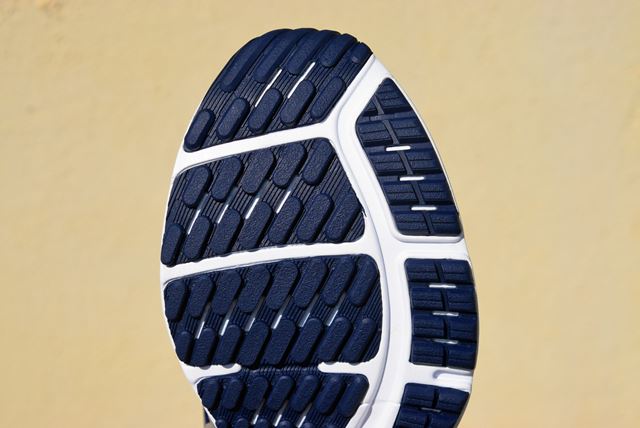 Then there is the area under the metatarsals. Here you can see seven large blocks of tacos. The largest ones, and occupying the interior and the largest surface, are in charge of complementing the damping, but above all in a place where there is the greatest impulse pressure, it is in charge of adhesion and traction. The exteriors collaborate in that the grip complements the stability.

And then there are the grooves that run through it. The most important of all is the longitudinal that begins at the heel and reaches the tips of the fingers. Its main function is that the shoe does not transition in any way, but guiding it so that the footprint is as efficient as possible. Finally, three large longitudinal grooves in the goals have the function that the sole collaborates in the flexibility of the shoe. 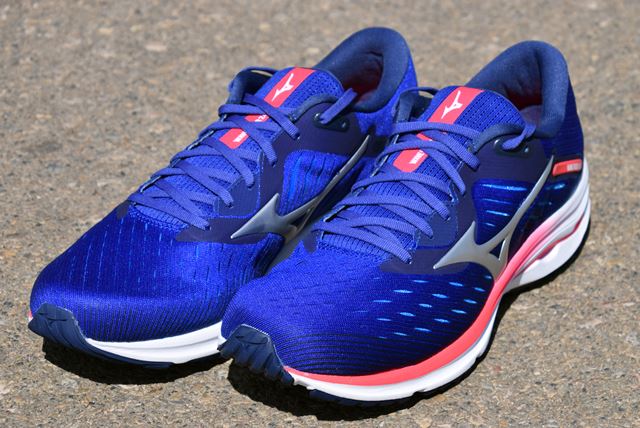 The Mizuno Wave Rider 24's upper cut may appear to be unchanged from the previous version, but it is not as it previously had two separate and clearly delimited zones and is now a one-piece engineering mesh. 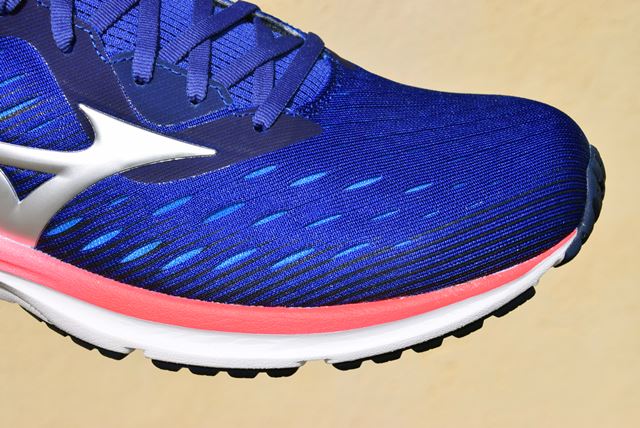 This “Engineered mesh” is biomechanically designed to improve characteristics such as breathability, fit, comfort or even regulate the temperature of the foot. Again, the pretty "Runbird" logo serves as a reinforcement for the midsection, where support is important. 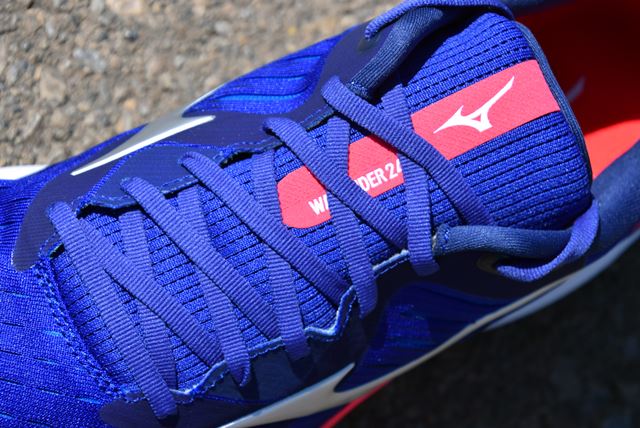 The laces are flat occupying six eyelets of seven. And for those who pay attention: you can't see any strip where they are passed. That's because the tongue is attached to the body of the shoe up to mid-height with an elastic material that does not allow it to slip, but that grips you like a sock and makes it easy to put on.

The bowl comes generously padded as in previous editions, but what has been modified is that it is now more rounded on the side of the collar to improve the fit and avoid annoying chafing. On the inside, the (foam) insole is the thickest Mizuno has ever put on a Rider, for even more comfort underfoot. 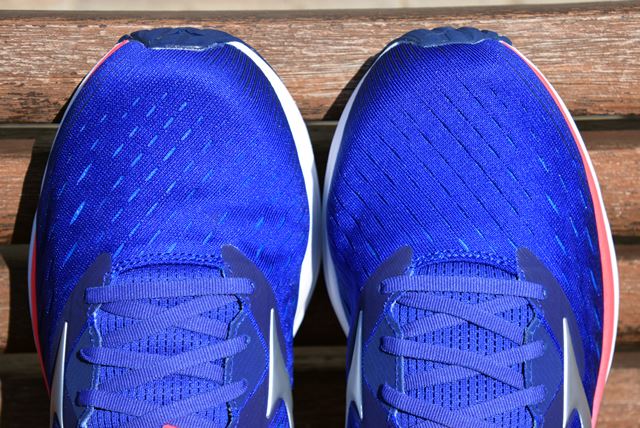 The mesh has two layers, the exterior being the one that has quite large holes for proper ventilation. They are combined with Mizuno Intercool, which is technology, based on materials and design, to keep the foot as cool and dry as possible. Use a non-visible material in the toe cap to reinforce the protection of the fingers.

Mizuno Wave Rider 24 is a very advanced daily training shoe for runners with a neutral tread or template looking for high performance materials. And it is that all of it is a succession of the best materials and designs of the Japanese brand to obtain the most comfortable version of a shoe that is well worth for training (and any type of training, even fractionated) as to take it to races where it is prime going comfortably from the start to the finish, especially the longer the distance to be covered.

The Osaka-native brand redefines the iconic “Rider” feel by introducing new Mizuno Enerzy technology. By inserting it into the heel wedge, it improves cushioning and energy return and already combined with the U4iC material and the Wave plate it achieves a smooth, fluid and dynamic running experience.

The rhythms to use it would not only be typical of the filming. Wave Rider 24 allows you to tighten the nuts if you want or need it and take it beyond the possibilities of each one @ at times when you are asked. There are "quieter" shoes to roll more calmly @, like Mizuno Wave Skyrise, Wave Sky, Wave Ultima ..., And also to go faster, or directly to the top like Duel Sonic, Wave Sonic, Wave Duel, Wave Emperor or Wave Shadow ... Many of them are included in the 10 best Mizuno running shoes, where the equivalent to this Rider is also found, but for those who have an excess of pronation in the tread: Mizuno Wave Inspire.

The grace of Wave Rider is its versatility. On the other hand, it must be said that it can be used by runners of different weights, but better if they are mainly middleweight.

And I like that Mizuno follows him keeping the 12mm drop to this important daily training shoe. Without intending it, they make this model a reference against marketing and the gurus of medium hair, who sell lowering of drop (even to historical models that have always worked) as the panacea for running like Bekele, Kipchoge or Farah (as if a low drop alone was the solution to many structural problems, and even capable of improving a @'s running technique as well, magically). 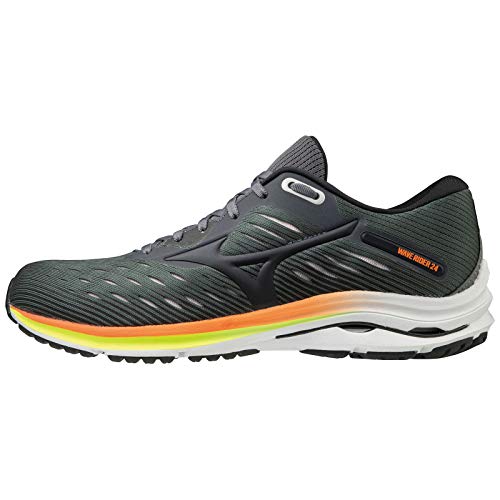 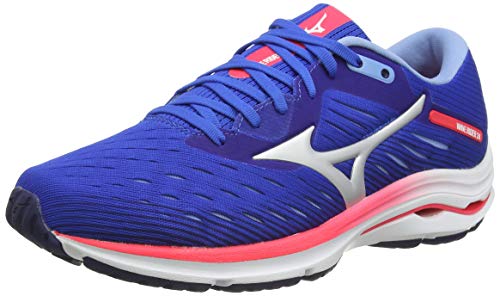 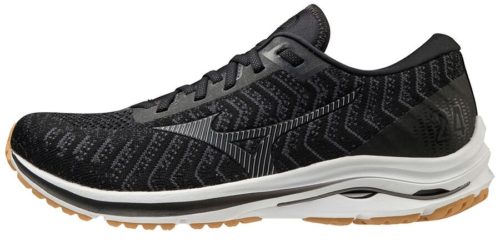 There are more finishes of the Rider than the one analyzed. This is Wave Rider 24 Waveknit, where everything is the same except the mesh, which gives a fit similar to a sock, combining elasticity and support, but improving comfort and breathability. Those looking for a very, very successful upper, in the Waveknit finish they have great elasticity and support. 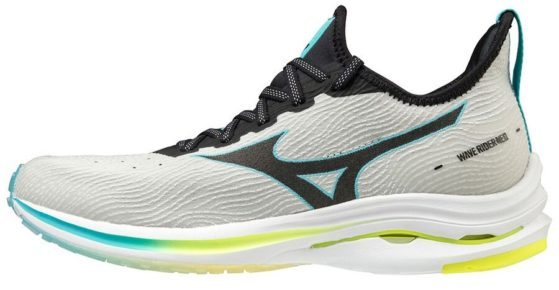 The lightest version in Wave Rider history (only 260gr!) Arrives with a perfect balance between cushioning and reactivity. Be careful that here, aspects of the shoe do change, so we are waiting to have one in our hands (or feet 😉), to explain all the details and nuances regarding Wave Rider 24.

This premium quality shoe concentrates the most important innovation in the midsole, precisely where the Mizuno Enerzy material is inserted. It consists of a full layer of Enerzy and an additional wedge in the heel area, all for a much softer and more reactive cushioning, and different from everything before. It is combined with the Wave platform which ensures the best stability and a transition of the tread so far.

The new Wave Rider Neo has a surprising bootie or bootie-type construction where the tongue and a seamless upper work as one piece to offer a perfect fit and with guarantees that the foot will stay in place in all its movements, even the most extreme.

no rating based on 0 vote