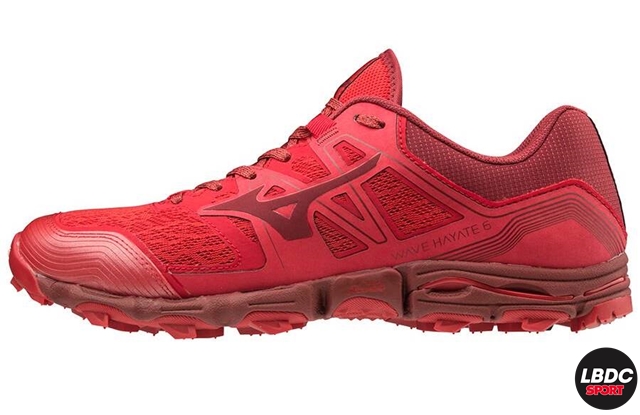 We analyze the characteristics of Mizuno Wave Hayate 6, a trail running model focused mainly on those looking for a lightweight shoe, very agile to go fast, and that has good grip and support. The lightness is clear since it does not reach 300gr, with reinforcements and everything, remaining at 290gr in the men's finish and 245gr in the women's.

Share space at home with other models of the Japanese brand Mizuno such as the versatile Wave Daichi, the all-terrain-kms Wave Mujin and even the initiation shoe (but of a technical range) that is Wave Ibuki. The profile that would correspond to Hayate would be more that of competition, or any type of training where you want to go fast and light. 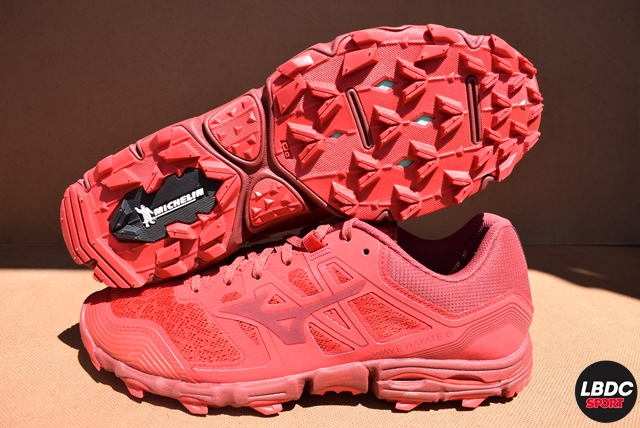 To do this in Hayate 6 Osaka assemble a new version based on two elements that work and very well: the Michelin sole and the midsole. Above is where the clearly visible improvements come, with a more reinforced upper cut, which allows attacking more complicated areas or for longer or longer distances.

And rest assured that in Mizuno Wave Hayate 6 ESS Rock Plate remains, or what is the same, the plate between the sole and the midsole that protects of sharp edges, rocks or roots, not allowing them to be nailed until disturbed.

Something to note is that this shoe complies with Mizuno Green Grade, which is a certification of the Japanese brand to ensure ecology throughout the life cycle of its shoes, that is, from the acquisition of raw material, manufacturing, distribution and utilization. Everything to reduce the environmental burden. Now yes, let's go for the details. 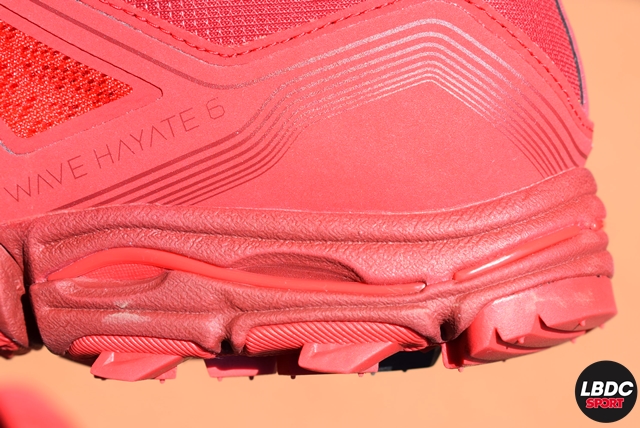 The Mizuno Wave Daichi midsole maintains the configuration that is giving you such a good result. It is not only the material, but also the design and distribution that make this shoe not only cushion, but also provide some stability thanks to the Wave plate inserted in the back.

The material used is AP + and it is distributed throughout the midsole. AP + is a multi-polymer compound that achieves excellent cushioning on the one hand and high durability on the other. The AP thing comes from Acceleration Polymer, and the "+" was added when Mizuno reformulated it to gain even more in that high cushioning and durability. 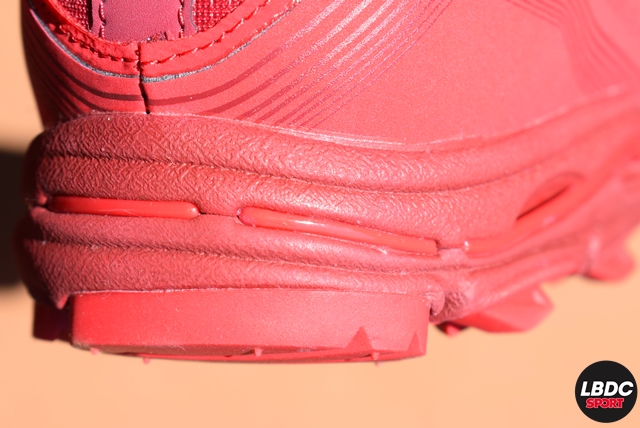 To complete the set, in all the part of the midfoot to the heel, Mizuno inserts a corrugated plate made of Pébax, known as "Wave" that is responsible for improving the cushioning. In addition, it controls that the shoe behaves stably when the impact occurs when running.

The Wave Hayate 6 profile is relatively low for a trail running shoe as its midsole is barely 16mm thick in the metatarsal area and 25mm thick in the heel area, providing a 9mm drop. This will give a great feeling of the terrain where you run, although those who worry if they are going to nail sharp elements on the foot (such as stones, rock points, roots, etc.) are wrong since Hayate 6 incorporates a Protection plate. 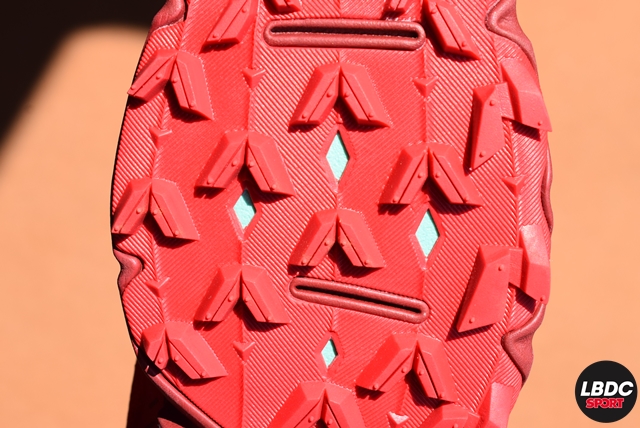 It is ESS Rock PLate and is easily visible if the shoe is turned and viewed from the sole: in the area of ​​the metatarsals, Mizuno has provided four diamond-shaped windows so that this technical resource can be seen.

And looking also in profile, laterally, it does not matter if from the internal or external face, since it goes from side to side, we see in the center of the shoe two large grooves in the midsole. If we turn the shoe again and observe its path, we see that they cross and intersect on the sole. This is Midfoot groove and it is a technology that helps in adaptability to the terrain. The XtaRide inscription, which can be read, is actually the sum of technologies that end up working to make the footprint the best possible (AP +, Wave, Midfoot Groove and the designs themselves).

The sole of Mizuno Wave Hayate 6 is one of the most spectacular parts of this model. As I said in the introduction, it is continuous, but it makes sense given the high level that the Japanese brand has achieved with the magic combination: design + materials, thanks to Michelin.

The giant tire manufacturer, returns to Mizuno one of its reconfigured MTB tire designs to adapt it to a trail Running sole. The result is a very, very aggressive sole, with enormous traction capacity thanks to the size and configuration of the cleats. They are 6mm deep in practically the entire sole, although in the heel, those in the countergrip to work better on the descents, reach 7mm. All the ones from the midfoot to the toe have an arrow shape, to act incisively forward, and their separation will help the mud to come off more easily.

The inscription “OC” that is almost hidden in the sole refers to the fact that one is used in this of the most resistant and best grip compounds achieved by the French of Michelin: Outdoor Compound.

Just under the metatarsals, next to the rhomboid windows that allow you to see the ESS plate that protects against rocks, are two transverse grooves that help the shoe to flex better during the transition of the tread and thus gain agility of use. The upper of Mizuno Wave Hayate 6 is the part of the shoe that concentrates the changes and improvements of this new edition. Of course, it maintains the Mizuno's own AirMesh light mesh, which will provide breathability, especially in the area of ​​the fingers. This is where the holes are largest and the surface is freest so that they have more freedom of movement. 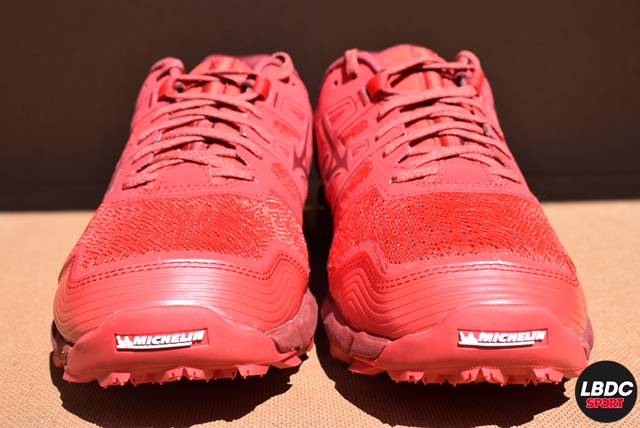 Of course, the toe is strongly reinforced with TPU material to protect the fingers from small impacts against stones, branches or any small trap that the path puts us (or clueless, that there is also running on the mountain). 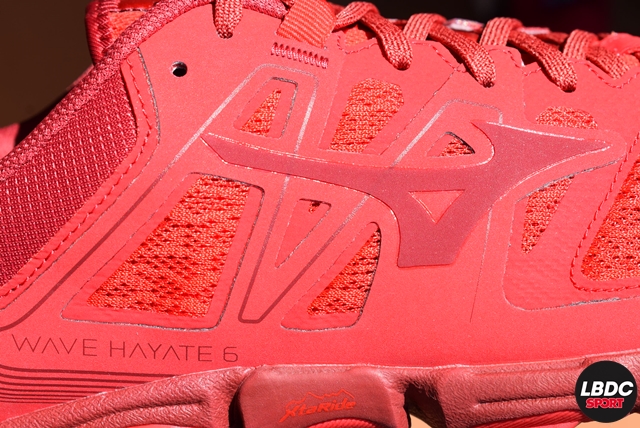 The most visible change is in the middle zone, since if in Hayate 5 the mesh was a simple grid with heat-sealed material, now the mesh is as dense as in the rest of the shoe, but it has also been provided with a structure in TPU that greatly increases the level of support of the midfoot. Therefore, it can be seen that Mizuno has wanted to get a grip on the subject of restraint. This results in that it allows to be even more aggressive in its use and to have greater resistance holding the foot and lasting over time.

The laces are flat and are not passed through the tongue because it is not necessary: ​​it is already attached at mid-height to the body of the shoe. A tongue that is less thick than in the previous version, but in return is more robust. The interior of the cup is very fluffy to make it comfortable and, although the insole (Premium Insock) is spartan to the touch, under it, apart from the midsole itself, there is a padded footbed that increases comfort. 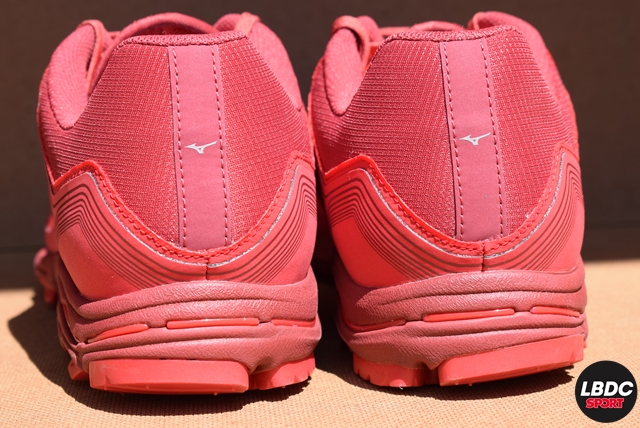 The heel counter is quite forceful, but more on the sides than in the center, which is appreciated by those who often suffer from the heels of the shoes pressing on the Achilles.

Mizuno Wave Hayate 6 is a trailrunning shoe focused on competition or agile training or where, ultimately, you want to get chicha to the matter. To go calmer or travel all kinds of distances, even ultra-distances, there is already Mizuno Wave Mujin. And between them, Wave Daichi, the most versatile.

But Wave Hayate 6 is a good tool for those Trails of short to medium distance, mainly, and better if those who use it are light or medium. Its low weight of 290 grams in men and 245 grams in women already indicates that they are not loaded with reinforcements and stabilizers to undertake excessive distances or contain heavy mountain weights.

Another thing is that, as happens in most competition-focused shoes, a good running technique helps to squeeze the best out of their juice, especially due to its low profile of just 16mm in the forefoot and 25mm in the heel (less than many asphalt). This gives a 9mm drop.

The Michelin sole, with fantastic cleats and guaranteed durability thanks to the Outdoor Compound material, together with an optimized upper make it a very good option when choosing an aggressive shoe to run agile and fast on the mountain. 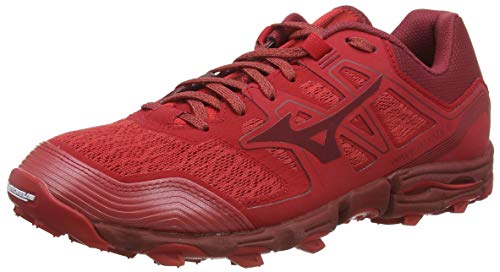