We analyze Mizuno Wave Sky 3 a daily training shoe designed for those who seek, above all, to travel great distances and also to do it comfortably. And it is that the Japanese brand, when launched this model, did so thinking of those who seek a blunt cushioning: the maximum cushioning Mizuno version. So much so that the Osaka, refer to the feeling that this Sky 3 returns as if it were floating.

Wave Sky 3 arrives with notorious changes. The "notorious" we say especially for the upper, now with a much softer and friendly line and at a glance. Another part of the shoe that changes with respect to Wave Sky 2 is the midsole, precisely the part where the Osaka ones have been most careful in this model and that brings surprise, as we will explain in the part dedicated to the midsole.

The heiress of Mizuno Wave Enigma goes ahead adding improvements and consolidating as a reference in great cushioning. Let's see why.

Mizuno Wave Sky 3 breaks molds in the own Japanese mark since for the first time it dispenses with the Wave plate of Pébax that so much symbolizes it. So those who are used to it, can already spin the shoe looking for it that they will not find it. Obviously, to a dead king, a king, since in parallel he arrives XPOP ​​which is a new compound with great cushioning and durability... and soft, while reactive. What it does maintain is The drop: 10mm. 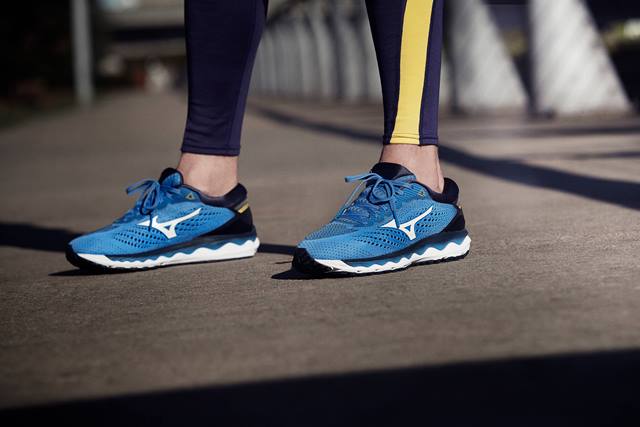 Wave Sky 3 will go directly to the catalog of shoes with better cushioning, in its case, it would be to provide maximum cushioning. And it does it thanks to the combination of that material XPOP with other two, also of high range as they are U4ic and U4icX.

How are the work distributed among these three materials? The most visible are U4ic and U4icX, which are the ones seen in the entire contour of the midsole. In fact, these waves, the new "Wave" is the shape that Mizuno has given to the joining area of ​​the plates of these two different materials that, when attached, provide cushioning and stability. This has been called Mizuno Foam Wave. I'd take note because this new technology is here to stay. The third element, the least visible, is XPOP. It is a polyurethane foam that is inserted mainly in the mid-front area of ​​the midsole, inlaid between the U4ic and the U4icX (in the photo of the sole you can see a yellow part). It coincides with the area under the metatarsals and, yes, it is the element that will provide a plus in reactivity.

The ability to absorb impacts, the way to do it (as smooth and comfortable as possible) and the reserve of space for a new material (XPOP) capable of providing softness with a great return of energy, especially considering the long distances, leave clear the mime with which Mizuno has outlined this midsole.

The sole of Mizuno Wave Sky 3 introduces improvements with respect to that of its predecessor to adapt it to the new configuration of the midsole. So, from the outset, it should be noted that they have significantly increased the number of flex grooves (or as Mizuno calls it: Flex Grooves, which is the same but in the language of Shakespeare). What Mizuno has sought is to increase stability and support, especially at the outer edge of the heel, where there are now ten slots where there were only three before.

Another substantial improvement is found in the area under the metatarsals, where there is a greater number of blocks, independent of each other, which will allow greater traction and adpatability to any type of terrain and its irregularities. Here the material is Blown Rubber, responsible for the adhesion. On the other hand, in the area of ​​maximum wear, such as the heel, compound X10 is used, the most resistant and durable of the Japanese brand since it is added carbon.

The upper of Mizuno Wave Sky 3 arrives absolutely renewed with respect to the previous delivery. In that Wave Sky 2, the reinforcements and stitching were very strong, giving a tough shoe look, I would say even rough. This is not so in the new Wave Sky 3, because these elements have disappeared to give way to a superior cut with a much softer line and more in line with the general trend of the market.

The technology that is most striking is AeroHug, a double mesh engineering that closes gently on the foot, but ensuring a good fit and adapted to all phases of the tread. This mesh wraps around the foot without seams, as it did in its predecessor. 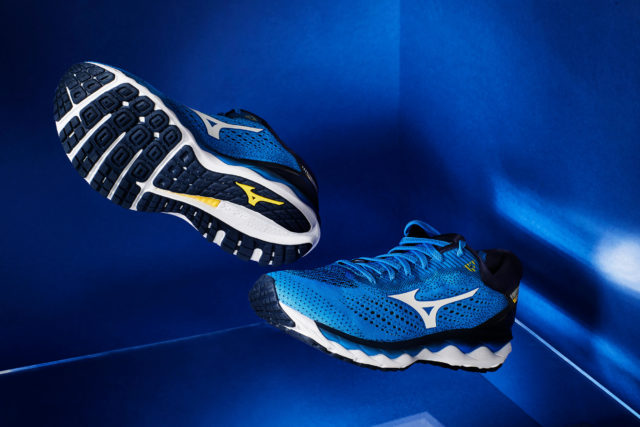 It is clear that the breathability has improved because the larger ventilation holes are not only in the area of ​​the fingers, but also go both sides of the foot. Ventilation is an important issue, and more in a shoe with a vocation to travel long distances as it is.

The heel area incorporates a strong buttress whose function is to stabilize the ankle, especially at the time of hitting the ground in the landing phase.

Mizuno Wave Sky 3 is a training shoe designed to perform all kinds of runs, but it is indicated, especially, for medium-long distances… and beyond! The user profile that can get the most juice we would find among those seeking a great and soft cushioning and that this is not at odds with a good return of energy.

Runners and runners who train long distances, or even want to take them to long-distance competitions will have a great ally in this model, especially if they are medium to high, high or very high, and the rhythms they seek are not precisely the fastest of the "grill". His weight is the logical one in a shoe of this profile: 320gr in the man's finish and 275gr in the woman's.

It is clear that Mizuno has searched in Wave Sky 3 for high performance shoe, but with great comfort. This is thanks, above all, to a midsole that responds with maximum cushioning followed by a return of energy already thinking about launching the next stride. A comfort that allows to run more time and that the distance is not an inconvenience, not at least from the point of view of the cushioning. See Offers. 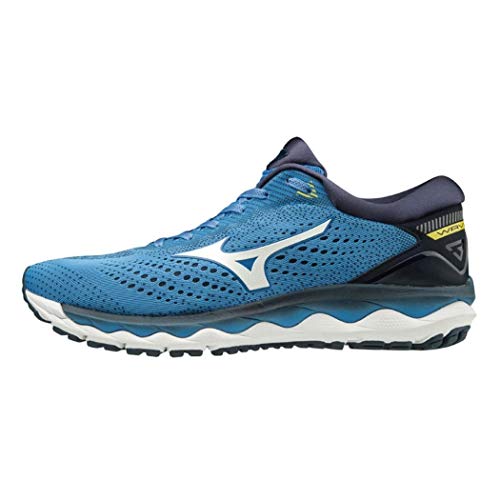