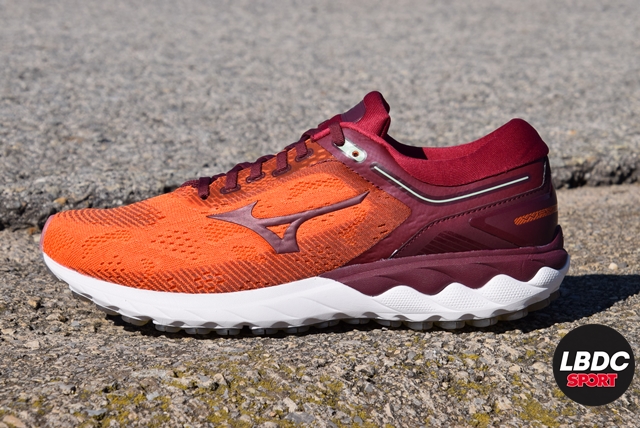 Analysis and characteristics of Mizuno Wave Skyrise a new shoe of the Japanese brand that arrives to delight those who seek a great feeling of cushioning while running.

Wave Skyrise arrives to complement itself with Wave Ultima and Wave Sky 3, some authentic shoes, and confirms how Mizuno does not stop implementing its latest innovations, as is the case with X-POP technology in the midsole. Despite being a newly created model, you already see intentions to enter the group of the 10 best Mizuno shoes.

Anyone looking for a breakthrough trend in Skyrise, with a different or striking appearance, is wrong since, very much in the Mizuno line, its appearance is quite classic. Last generation materials, but in a recognizable packaging. An element that defines the entry into this daily training shoe is its weight. And it is because it is neither surprisingly light nor surprisingly heavy. It moves in about canonical 300gr in the finish of man and 240gr in that of woman. As always, the Osaka brand moves in very balanced terms.

Another aspect that stands out before shelling this model, is that it does not go in the line of incorporating “miraculous” technologies that perform functions not seen before… Naaada of that, on the contrary: the objective of Mizuno Wave Skyrise is to promote aspects very sought after by the Most runners and runners: excellent cushioning and superlative comfort. Let's see how he succeeds. 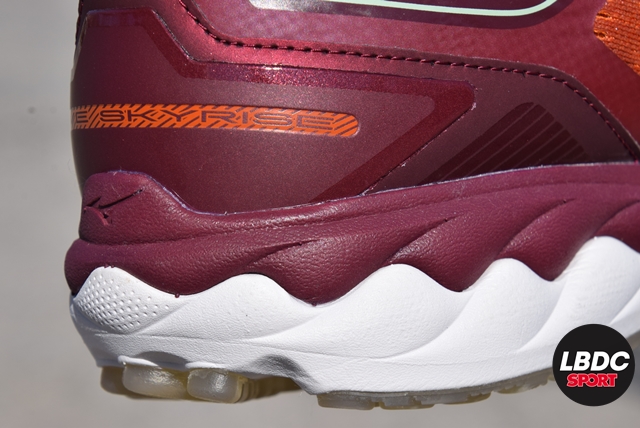 Mizuno Wave Skyrise's midsole lets you easily see that the traditional Pebax plate in recent decades is not present. But it is precisely the insertion of the X-POP compound between the other two high-end materials characteristic of Mizuno, such as U4iC and U4iCX that makes Wave Skyrise's midsole a special shoe.

I used to mention Mizuno Wave Sky 3 as his teammate. If in that shoe he explained that performance and comfort were sought, in this Skyrise Mizuno goes a little further in terms of comfort. Although it may seem exaggerated when you've run with a Sky 3 and have tested how high the Japanese brand had left the bar with that. 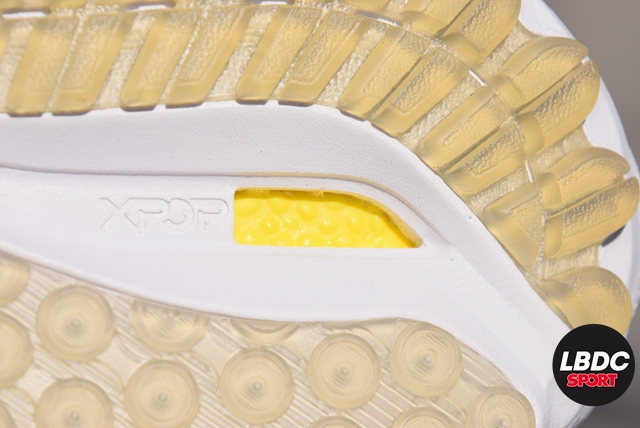 Thus, it is a softer midsole in terms of cushioning than the traditional ones that Mizuno had been serving in the past, so those They like to run on materials that convey high comfort, No doubt this Skyrise is an option to take into account.

X-POP is a type of polyurethane (PU) that runs through the midsole but focuses more on the heel area, which indicates that it will come in handy for all types of runners, regardless of the level or pace that Mark when he runs.

This new essence of Mizuno, X-POP, consists of inserting into the interior of the midsole, a material constructed from small spheres connected to each other that cushion the impact and also provide a high rebound capacity. 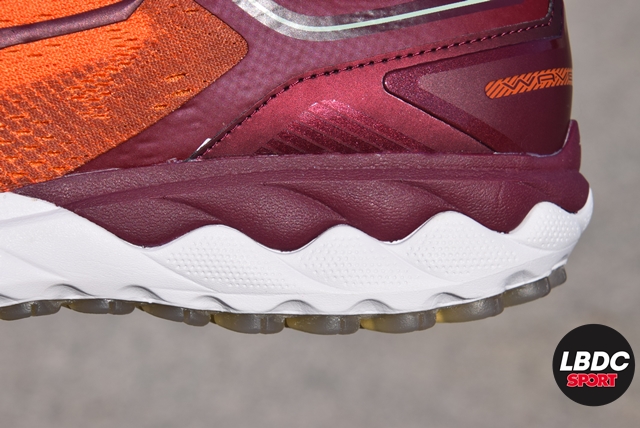 The other two materials, the ones seen in the Wave Skyrise profile are U4iC and U4iCX. Both have a great capacity of cushioning and durability and if they have such a similar name it is because they are very similar although with nuances: U4iC stands out for being lighter and U4iCX for greater reactivity and durability. The union of these two elements, also with a wavy shape between them, is what Mizuno has called Wave Foam. Combination of these three elements + design = great and soft cushioning with bounce capacity, high durability and high comfort.

Regarding the thickness and the fall, it must be said that the heel rises from the ground to 31mm. Instead, the metatarsal area does it in 21mm. This gives a 10mm drop or drop. 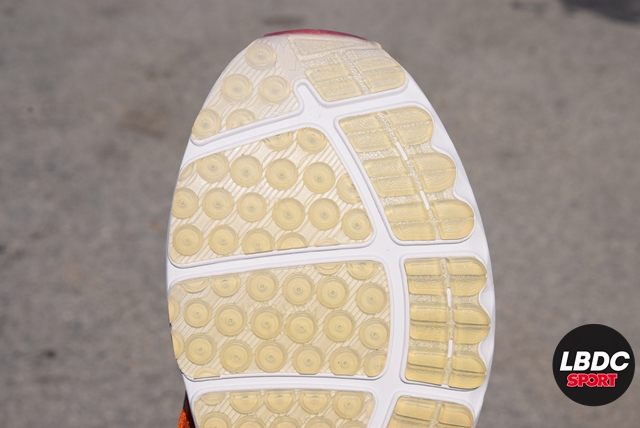 The sole of Mizuno Skyrise is obvious to use an unusual aesthetic resource in Japanese brands in general, and in Mizuno in particular: it is translucent and allows you to see the midsole through it.

Practically speaking, it is built with around a hundred tacos spread from the heel to the toe. 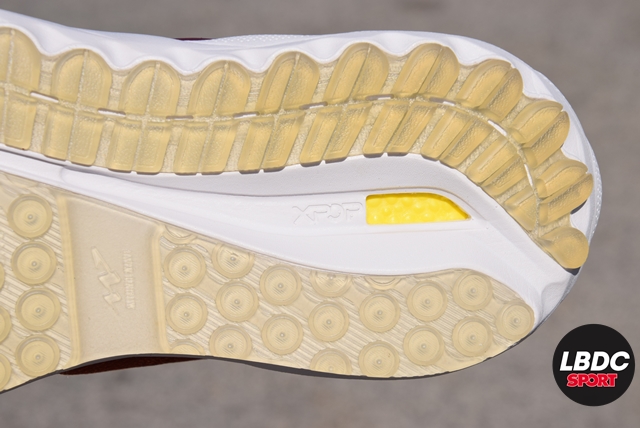 The groove that crosses the sole longitudinally, and which serves to guide the tread, the part in two, and that defines the shape of the strike. Those that remain inside, are rounder and participate mainly in traction. Those that remain on the outside, more rectangular, not only participate in the grip, but also stabilize the footprint by containing that area of ​​the foot more firmly while coming into contact with the ground.

To facilitate flexibility, Mizuno has inserted three transverse grooves in the goal zone for that final moment of the transition of the tread, just before launching the next stride. 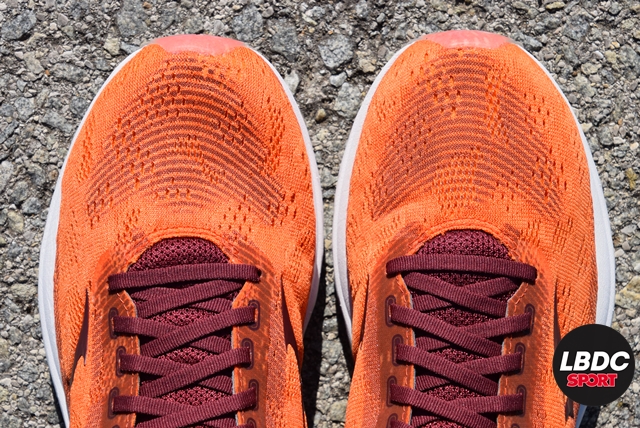 The upper Mizuno Wave Skyrise, as was already sensed by what he said in the introduction, has a classic look. Of course, without the synthetic leather reinforcements that one can think. In any case, it is a design with soft shapes, away from any histrionality and 100% functional. Just having it in your hands you see that comfort is still the leit motiv of this shoe.

The largest area of ​​Skyrise is a seamless mesh that wraps the foot from the toe to the midfoot. The technology used is Dynamotion Fit and is that the design of the upper cut interact with the foot during all phases of the tread, to maintain support. The mesh is open, so that, in addition to being light, it is breathable, while on the inside it incorporates a soft lining that is the one in contact with the foot. 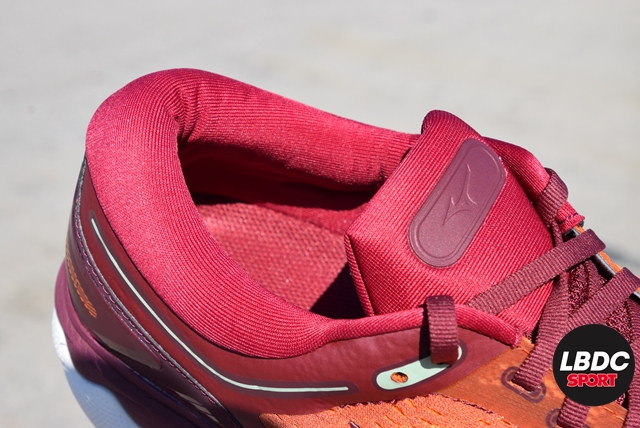 On the outside of the heel, a rigid piece will wrap the ankle providing stability at the moment of impact on the floor. On the other hand, on the inside, a thick foam covered with a soft fabric will hug softly, but firmly to this joint so that nothing moves from its position. Above, the laces are flat and are passed by six eyelets, leaving a seventh for anyone who wants a greater tightening. The tongue has no pin, but it is not necessary since it is attached to the body of the shoe on both sides. Inside we find a thick template (5mm) that rests on a padded footbed. This Skyrise shoe cheats. With her in her hands she seems less than she really is. After a few months knowing new rupturist models of other brands, such as ASICS Metaride or especially the Nike Vaporfly, when removed from the box, this Wave Skyrise may seem like a simple shoe.

But no, you turn it around and you see that everything is really cured and you even realize the sole and you think, "Look, it seems that here they have got a little ripped off ..." 😉 But as I always say, in the end what counts is Put them on and go crush them to see who it really is. 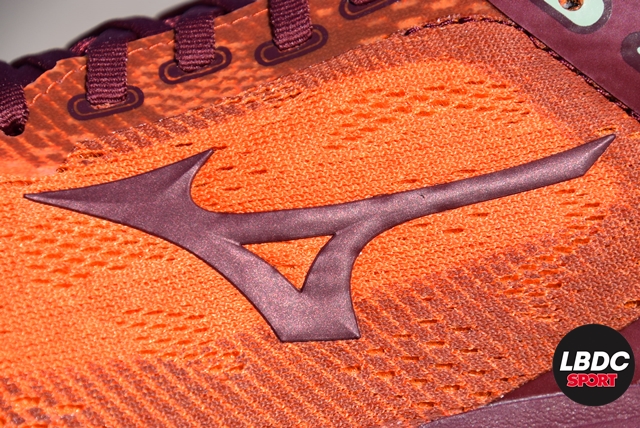 First you have to talk about the setting. It is exceptional throughout the shoe, but the area of ​​the fingers is more open than it seems to the naked eye. This is an advantage, something good and that those who have many shots hit, especially doing many workouts or high-travel, know that sometimes it is the difference between doing 400km and buying others or reaching 800-1000 and changing them because “already touch. " But it is important to say it because I know that there are also people who do not like the feeling of having very free fingers and need to have a constant feeling of tightening, even in that area.

The cushioning and comfort ... Definitely running with this Skyrise you are thinking that Osaka have taken the peace of mind to this softness, compared to its traditional firmness. The cushions have always been very good in Mizuno, but now they have moved from being the brand with the strongest firmness in the market to delivering midsole with very soft cushions and much more comfortable to use. 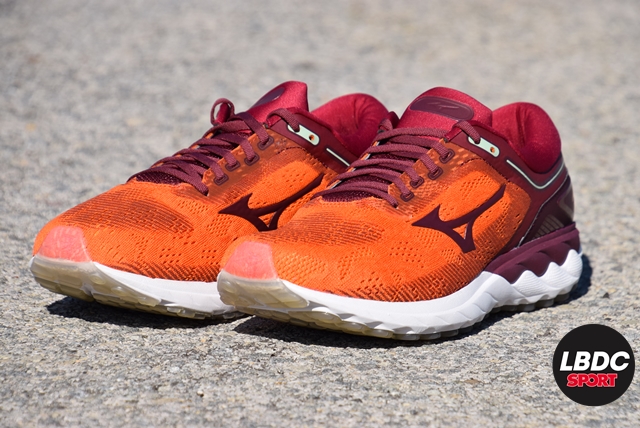 Filming and filming. Do not feel like taking them for more things because they do their job well there, then to reserve them for that function.

The sole is surprisingly good at traction level, especially when you pass through land areas, where I have once explained that the large plates that Mizuno traditionally made tend to suffer a little more. This is not, it is much better, no doubt, so even if you are an asphalt shoe, while you run you do not cut yourself if you have to leave and enter a path or track since they move just as well.

Mizuno Wave Skyrise is a Daily training shoe designed especially for those who like to run in a very cushioned and very comfortable way, thanks to his great midsole. X-POP is the great technology applied as a novelty in this model and also provides reactivity, with which the shoe will respond if at any given time it asks for some rhythm. Who looks for exclusive shoes for the series or competitions, this is not the type but rather mixed shoes or already directly competition shoes.

Not only X-POP is made the midsole. Two of the best Mizuno compounds are also used: U4iC and U4iCX. Both are cushioned and durable, but U4iC has accentuated lightness, while U4iCX has reactivity and durability. Working as a team is what forms Wave Foam technology. The drop is 10mm thanks to a midsole with heights of 31 and 21 millimeters respectively in heel and metatarsals.

Above, in the upper, a lightweight and breathable, seamless seam mesh is used and where Dynamotion Fit stands out as a technology to hold the foot in any position it is in.

Given its great cushioning and comfort it is a serious option to perform training based on filming, also if these are long or very long, or if they take an important distance race, such as half marathon, marathon ... or beyond 😉

Mizuno has prevailed values ​​such as cushioning and comfort against cutting grams at all costs so the final result is a weight of 300gr in the male finish and 240gr in the female, a correct figure for this shoe profile. The official price of Mizuno Skyrise is € 140. 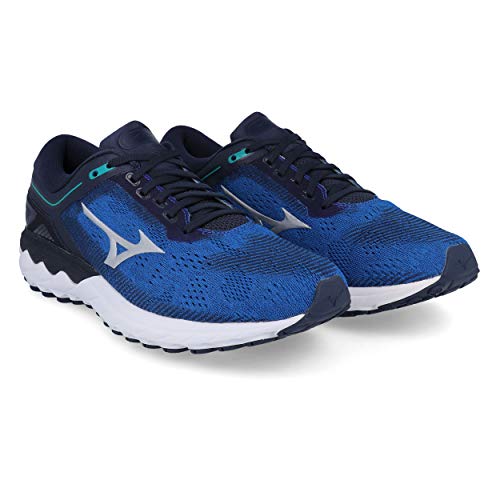