We take advantage of the launch of Mizuno Wave Ultima 11 Amsterdam to analyze the characteristics of one of the best models of daily training and that, in addition, now pays tribute to Rembrandt.

If in Wave Ultima 10 Amsterdam, which we analyzed in its day, the Japanese brand paid tribute to the city of North Holland itself, now the customization of Wave Ultima 11 is inspired by the famous painting “The Night Round”, also in collaboration between the centennial Japanese brand and the Rijkmuseum. It is a great way to commemorate the 350th anniversary of the death of this great Dutch painter and, by the way, be the official shoe of the TCS Amsterdam Marathon to be held in the near future. 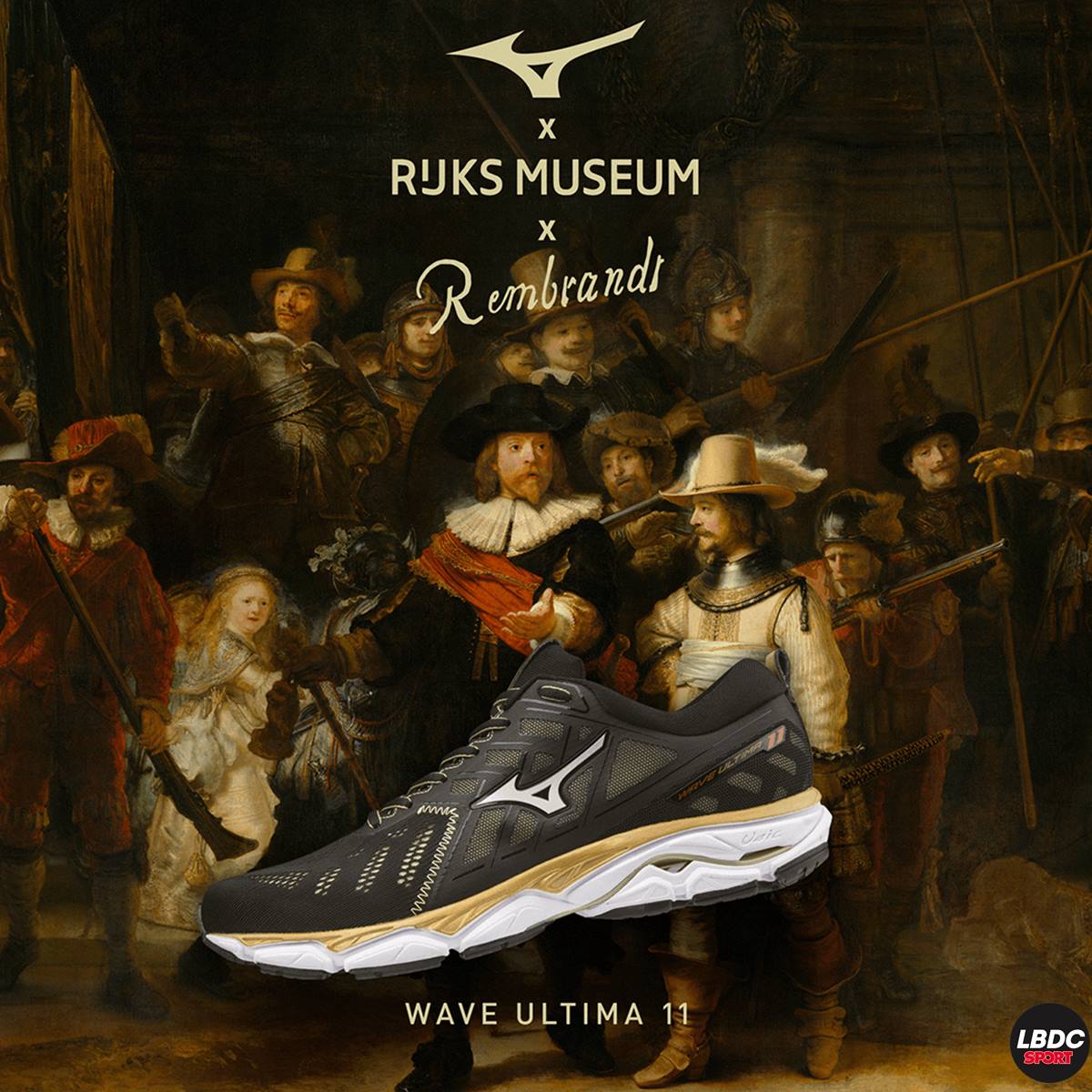 As I said, Mizuno Wave Ultima 11 is one of the best grill models focused on daily training. It is a cushioned shoe and capable of working one hundred percent for all types of runners (with neutral tread or with very slight overpronation), although it fits better those who move between a medium and high weight.

To do this, it uses a Wave unit in the midsole, which provides cushioning, but also stability. This piece in Pébax is combined with soft and cushioned material, a sturdy sole and a computer-developed upper.

A technological luxury with a decade of travel between the runner world that entrusts the greatest load of kilometers in training and day to day. Go for the details! 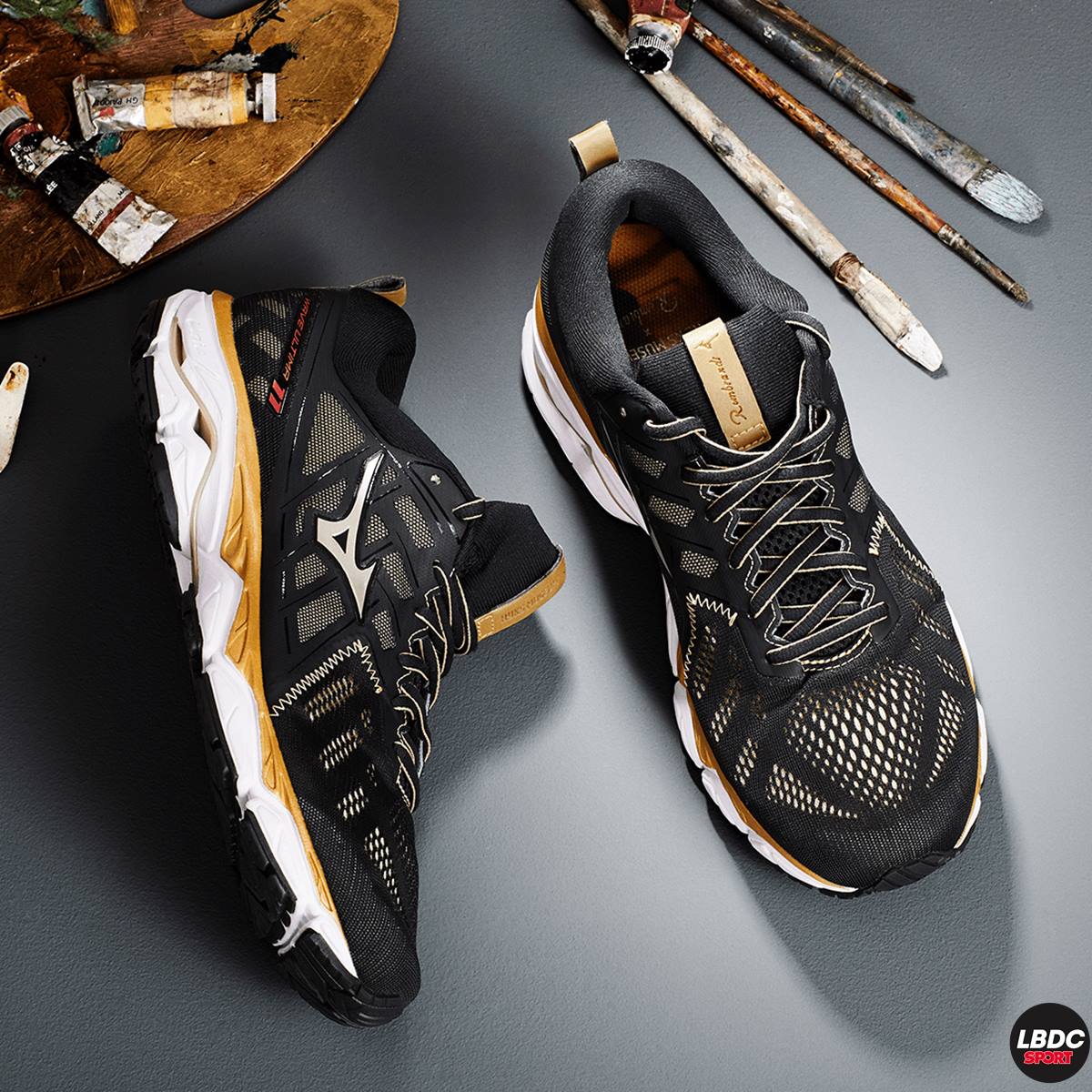 The midsole of Mizuno Wave Ultima 11 transmits functionality as soon as it is seen. The increasingly stylized line that combines two high-end materials such as U4ic and U4icX separated between them by the piece in Pébax that is Wave already indicates that there is a lot of work and quality in this part of the shoe.

The first compound we observe, the one that occupies the entire plant, from the heel to the toe is U4ic. This material is cushioned and lightweight. In addition, it is much softer than other Mizuno compounds of the past, which translates into a great sense of comfort.

Below, although only horseshoe-shaped, under the heel, we find the U4icX material. This is a softer variant, with greater impact absorption capacity. It is strategically located in the heel area, because this is the place where most runners and runners usually impact, first. In addition, this is an action that matches the user profile of this shoe. 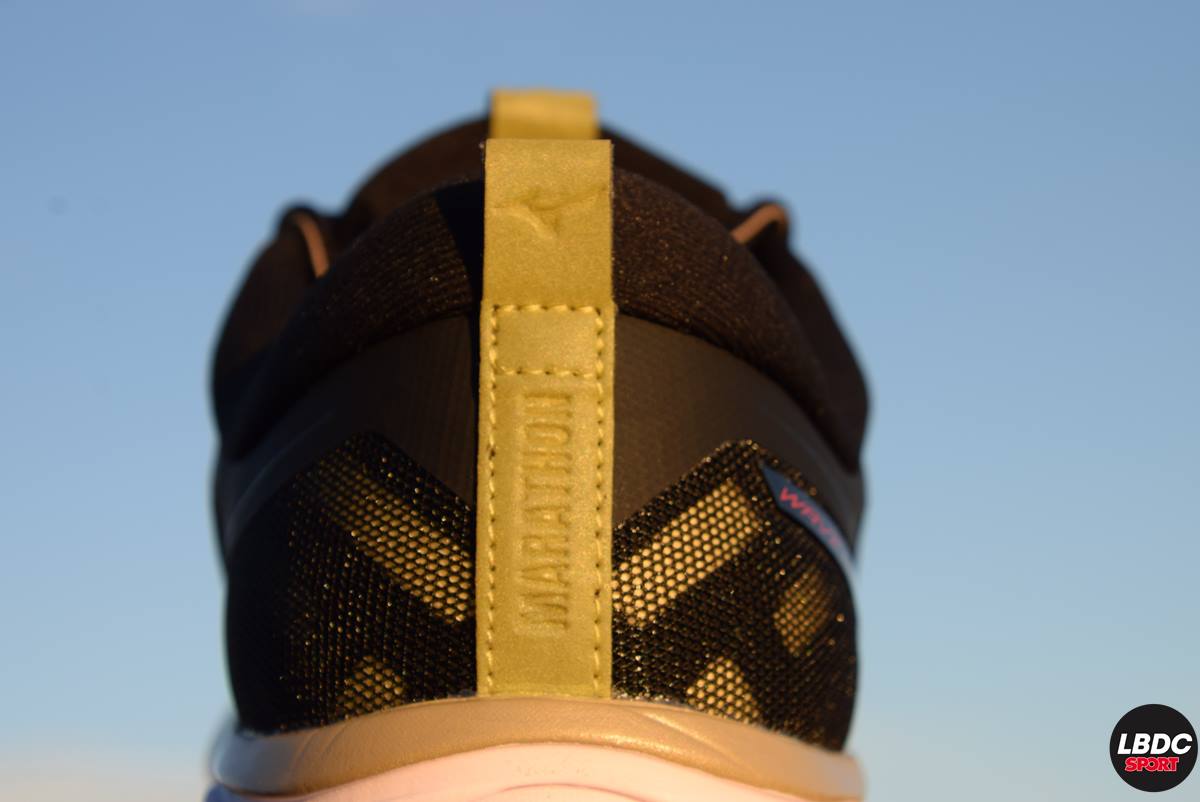 The next important element of the Wave Ultima 11 midsole is the Plate made in Pébax that commented previously: Wave. This piece has a wavy shape combining concave and convex shapes in such a way that it provides cushioning, softness and at the same time reactivity. This type of plate that Mizuno manufactures has improved in that sense to others, more appalling in the past, and now with even better performance.

The height of the midsole is 32mm in the heel area and 20mm in the forefoot, which gives a 12mm drop

The sole of Mizuno Wave Ultima 11 Amsterdam is wide, for a good support base and is separated into two large blocks: the heel and the midfoot onwards to the toe.

The first is shaped like a horseshoe (in communion with the midsole) and is separated into two blocks. This modular design will allow it to land more progressively than if it were a single block: the first deforms upon impact, but the second does not go into work until it has made a slight reduction in impact speed. When the two are already in contact with the ground, the midsole begins to work while it already falls with all the rest.

At that time is when the metatarsal zone comes into action. It has very wide tacos and connected to each other ... they almost do not look like tacos. In them, the contact surface is very large, thinking especially of a great traction on hard surfaces such as asphalt. 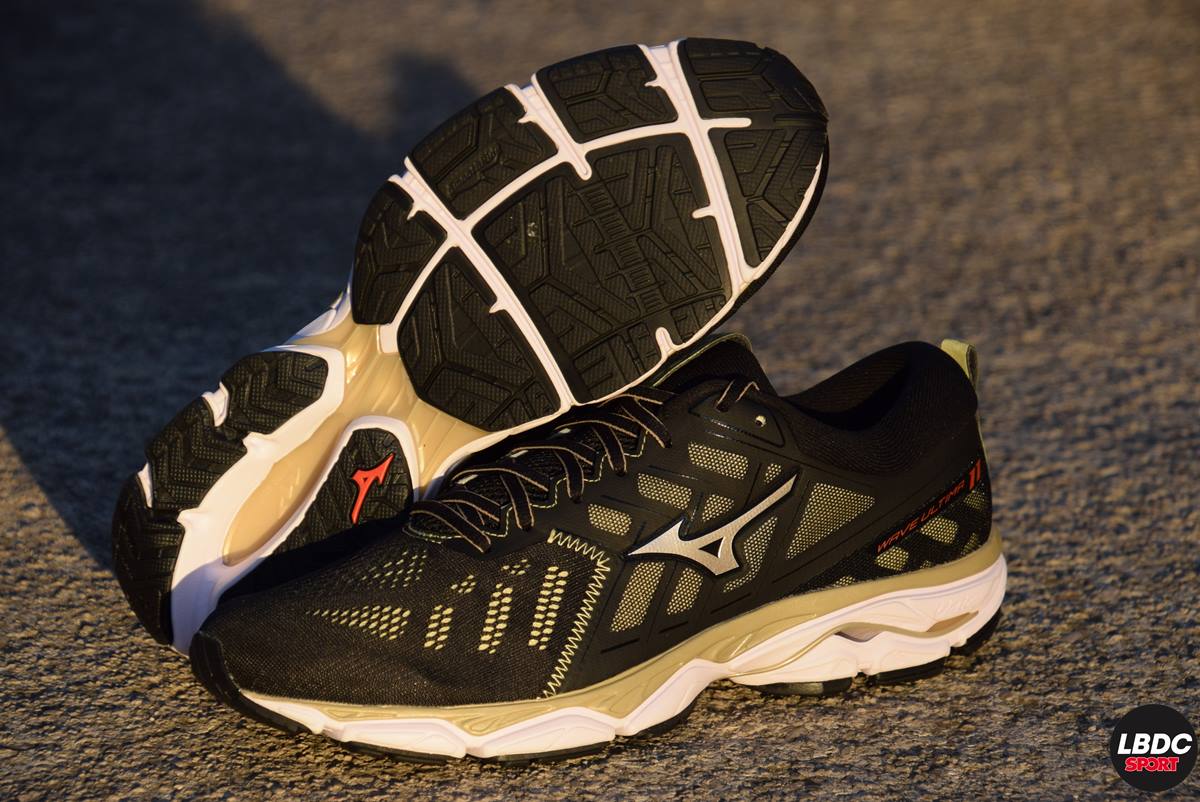 This middle area has three grooves (two from side to side and the third only in part), to facilitate the flexion of the shoe; an aspect always compromised when the rubber of the sole comes into action.

The material used is X10, the toughest Mizuno ever made for running shoes. It is a type of solid rubber to which, in addition, in the manufacturing process carbon is added so that its resistance to abrasion and, therefore, to wear, is much greater.

In the area of ​​metatarsals, however, blown rubber is used to make it softer and improve hard surface adhesion (asphalt, sidewalks and cement). 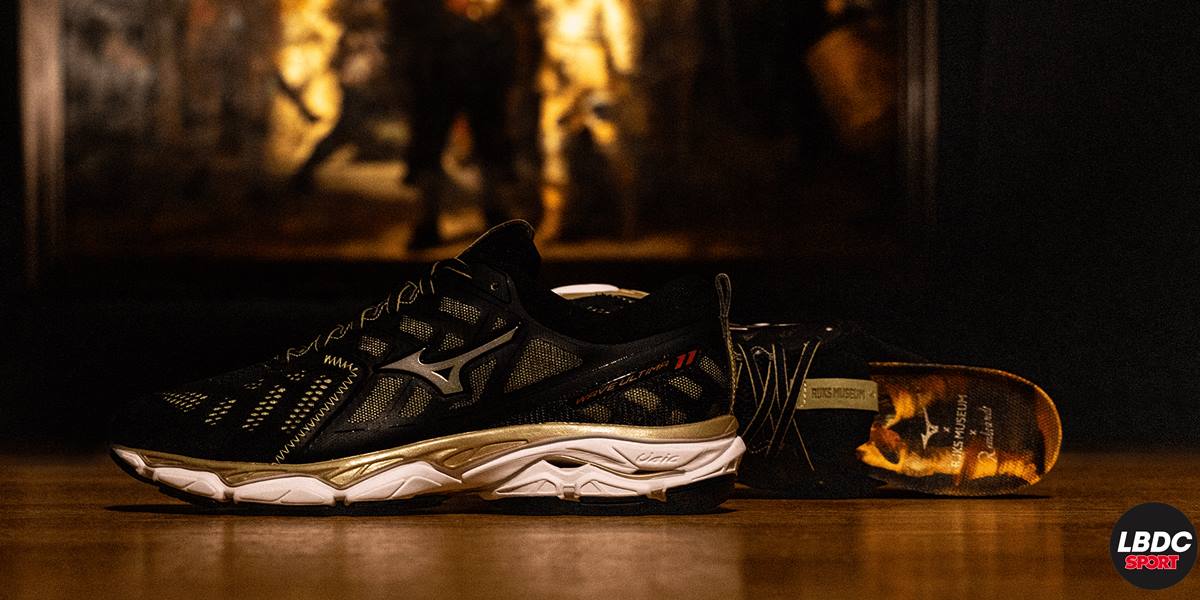 The upper Mizuno Wave Ultima 11 Amsterdam is simply different because of the personality that Osaka wanted to print. The willingness to honor Rembrandt and Amsterdam is not an obstacle to the technological solutions being the highest in Mizuno.

And I start where I never do it: the template since it is probably one of the prettiest I've ever seen in a shoe ... Too bad it's not seen while we use them. They have a printed image that is none other than the of Captain Frans Banninck Cocq, giving the order to go to Ensign Willem van Ruytenburch, under the watchful eye of the militiamen of the Corporation of Arcabuceros of Amsterdam, in fact those who commissioned that picture to Rembrandt… This is the (great concession) of Mizuno to this element that perhaps does not usually have the importance that others of the footwear. In their numbers it must be said that the staff of Wave Ultima 11 Amsterdam reaches a huge 6.2mm thick padding in order to improve the degree of comfort. 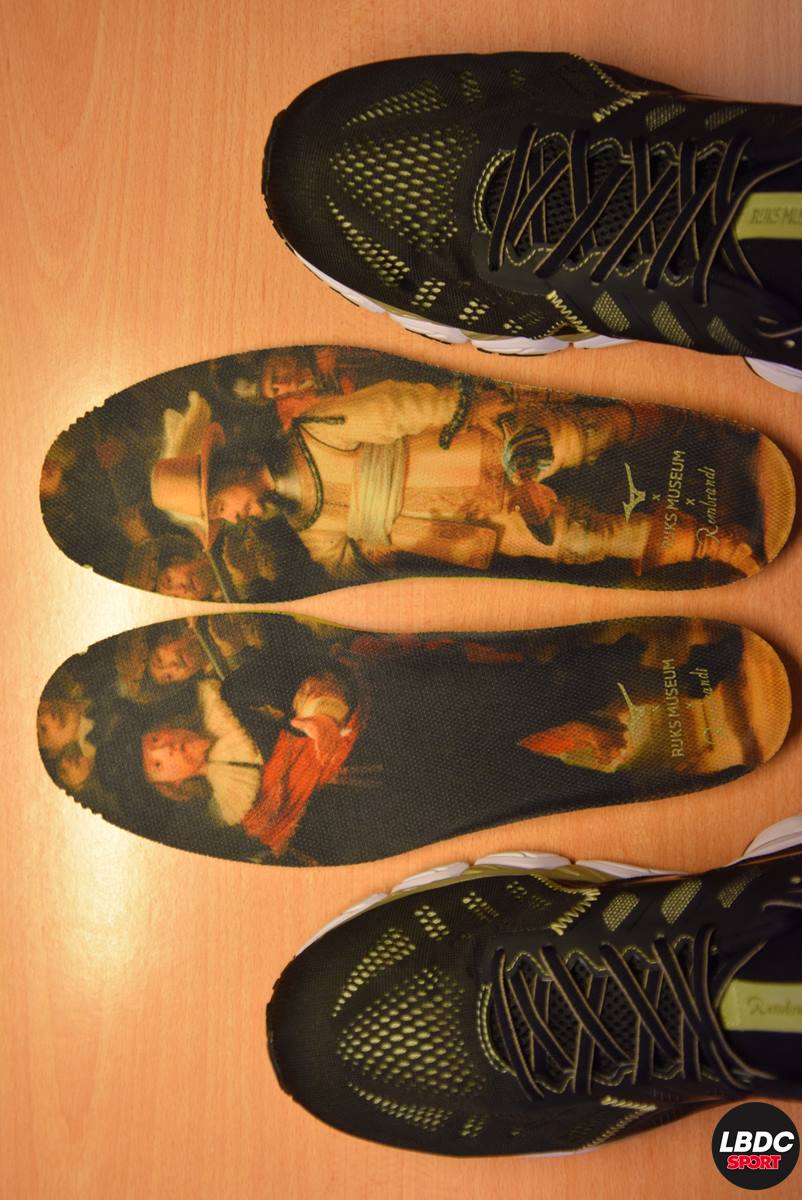 The element this time more important of the upper, the mesh, is designed by computer and manufactured distinguishing three large areas. The first one is that of the toe, where the engineering mesh shows the biggest ventilation holes of the shoe. The area of ​​the fingers is the one that demands greater breathability and here Mizuno achieves it with a good pattern of holes through all this part. The toe is also busier and is reinforced internally. 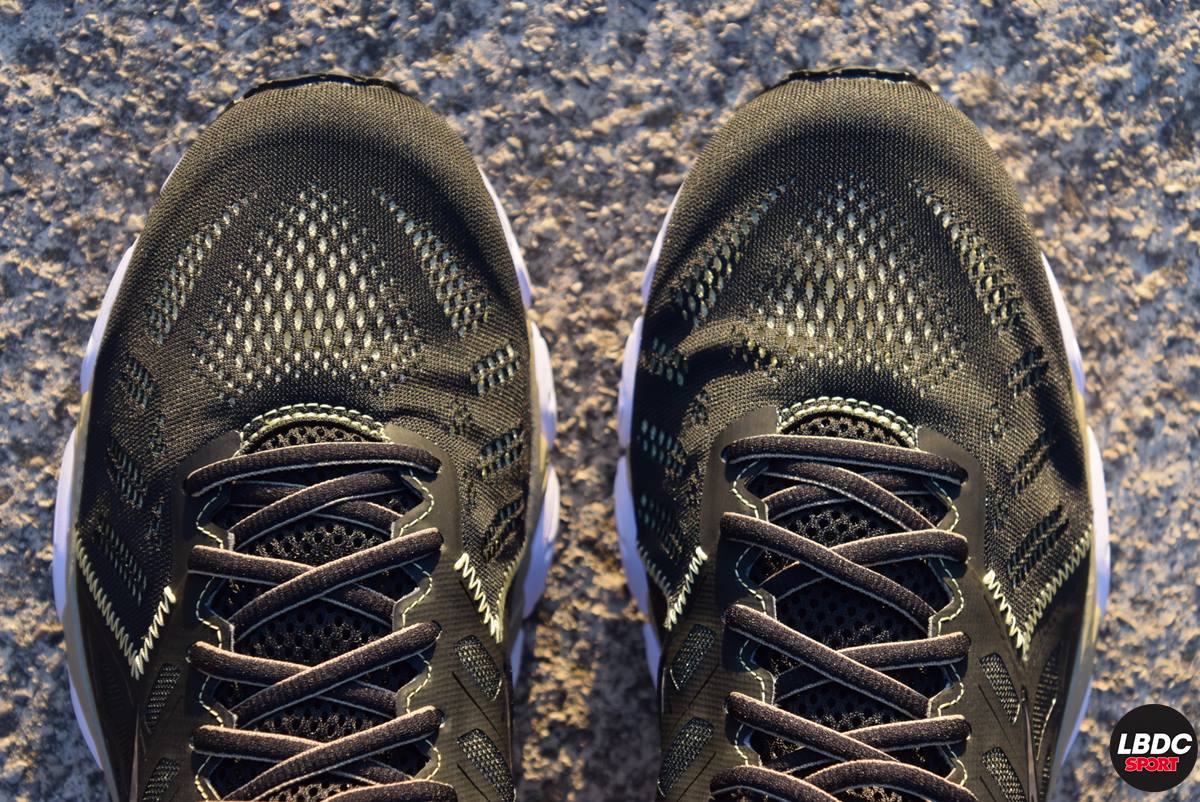 The second would be found in the middle zone and is responsible for the subjection. Breathability exists, but here it is important to wear the foot tightly fastened. For this, Mizuno uses heat-sealed strips and interwoven with each other so that when the strings are pulled tightly they contain the tensions of the transition of the tread. 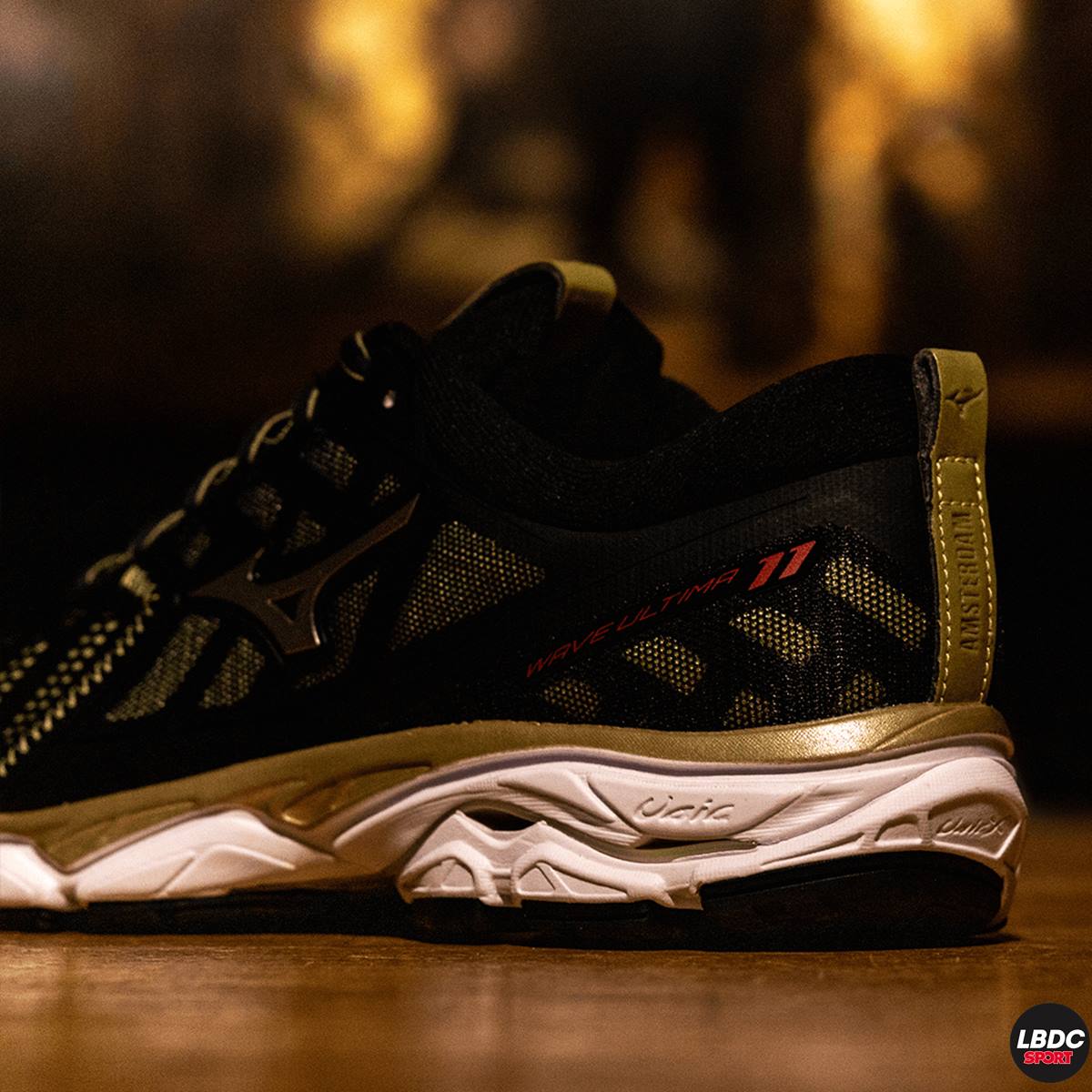 The other place is the heel area. Aesthetically it is very similar to the middle zone, but here there is a resource and it is the inner reinforcement (not visible) that allows to contain the ankle at the moment of impacting on the ground, keeping it stable. This part is crowned by a strip that helps to fit and in which Mizuno has recorded "Amsterdam" (left foot) and "Marathon" (right foot). These strips are reflective so that it is visible who uses them at night.

The laces are semi-flat and although they seem short, as the shoe is used and it adapts to the foot, they go out more until they have a normal measurement. They are not passed through the padded tongue but because it is attached to the body of the shoe also by the sides and will not move.

The bowl is very spongy, gently grasping the contour of the ankle when the laces are knotted. Below, I have already commented that there is a 6.2mm thick insole, but what I have not said is that there is still a foam footbed of another 2mm below: Maximum comfort! 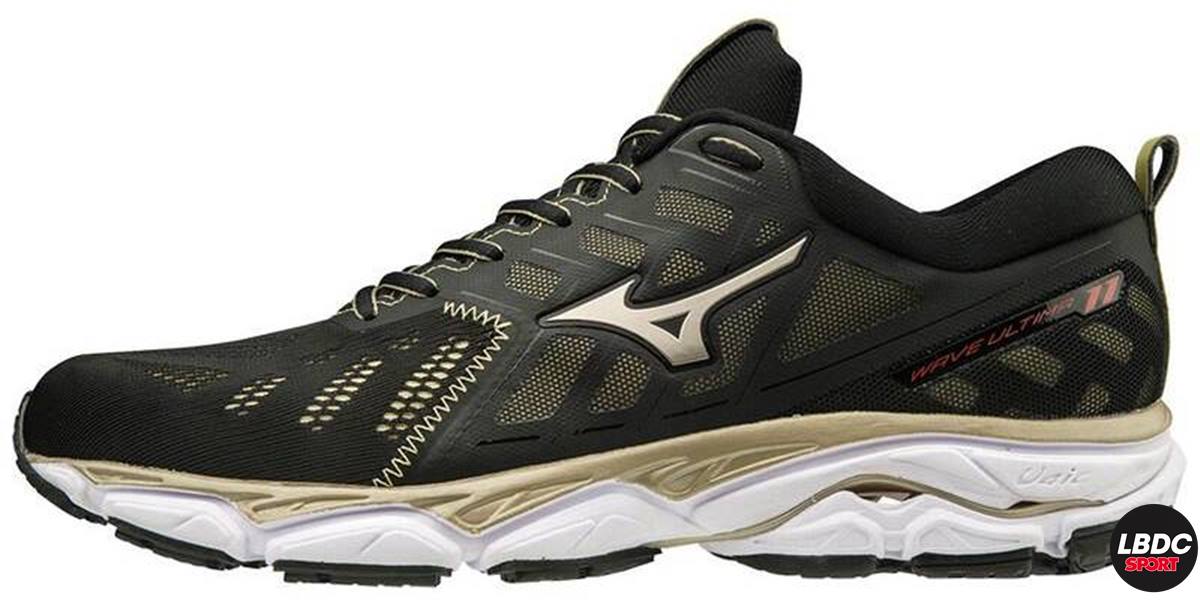 Mizuno Wave Ultima 11 Amsterdam represents the reliability based on the continuity of a design and materials that work and very well. The beautiful and elegant upper distinguishes it as something special, but mounted on a guarantee chassis based on one of the most reputed mid-soles that exist thanks to two of the best compounds on the market: U4ic and U4icX matching a highly valued damping system and with more solera: Wave.

This triplet is what allows Mizuno Wave Ultima 11 to be able to use medium to high weight brokers and brokers with all guarantees, not only for a comfortable race, but to travel as many kilometers as one or one can. It also has a sole that uses solid rubber with parts to which carbon is added, for maximum durability. The upper, as I said, is not only very elegant, but also extremely functional (the polite does not take away the brave).

The most suitable rhythms should be those of the shootings, more or less fast according to each runner or runner. Anyway, I would not recommend it for rhythms below 4'15-4'20 ”a thousand because for faster rhythms there are already other alternatives, lighter, more reactive and, in short, more focused on going fast. Those who want to run long and comfortable Wave Ultima 11 is a great option. Anyone who wants to go even further in distance and degree of cushioning and comfort, could try another Mizuno model such as Wave Sky 3. On the other hand, those who are looking for part of that but greater performance in terms of versatility, in Mizuno Wave Rider 23 you can find another ally