Analysis and characteristics of New Balance Fresh Foam More v2, an expected evolution of a historical model for the American brand. Conceived for maximum cushioning, never before More, New Balance had built a model with such midsole volume. And if it has been manufactured, it is for the idea of ​​getting the most cushioned shoe in its entire catalog.

Fresh Foam More v2 therefore represents the fight against the effects caused by the impacts when running at maximum, something that should be a celebration for those seeking a high level of cushioning, for whatever reason. 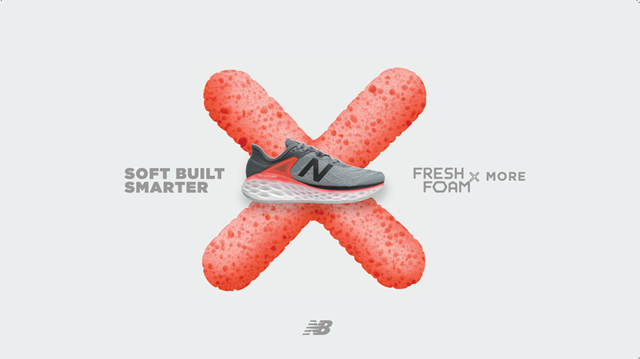 To do this, it uses the new formulation of Fresh Foam: "X", which also includes its companions FF 1080v10, the new FF Tempo, FF Hierrov5, 880v10 and 850AT, only in a much higher proportion (it rises no less than 3cm from the ground ), since the goal is also somewhat different.

But New Balance Fresh Foam More v2 is a lot more than accumulated cushioning, it is comfort of use. The best way to see it is that despite that great shoe look, its weight is much lower than other daily training shoes. And no one would say, since it weighs only 271gr in the men's finish and 223gr in the women's. There is certainly a lot of work there. 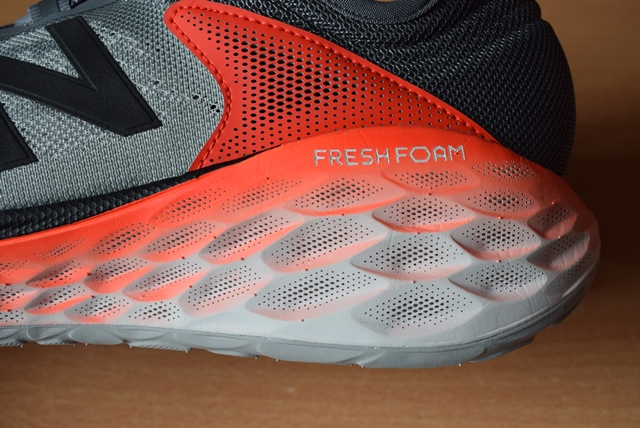 The More v2 midsole is built exclusively with Fresh Foam X, an evolution of Fresh Foam that came just over five years ago to the runner scene. What is Fresh Foam? It is a material for the midsole, which was born at the New Balance Sports Research Lab, in Massachusetts. It consists of a compound of thermoplastic polymers joined to a computer design obtained through D2D (Data To Design), an analysis of data based on thousands of tread studies, to achieve, together, that with a single material, damping is obtained. , stability, lightness, flexibility and response.

As a novelty, on the inside face, and within those New Balance shapes, it has added some figures or striations to add additional stability. With one shoe placed on top of the other, you can see the external face of the foot, with small dots inside concave shapes that soften the compression of the material when it hits the ground, while on the internal face, those same shapes are seen, now with more filling and those grooves that will give it consistency and, therefore, stability: 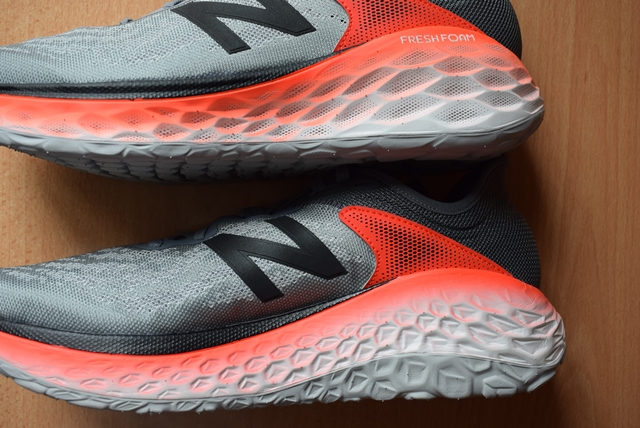 The regular forms of Fresh Foam (specifically Hexagons) that appeared in 2014 have evolved over the years to other more organic and irregular forms to polish the cushioning for the better. Now, Fresh Foam X, seeks to replicate, using foam, more real microscopic structures. In summary, What the new Fresh Foam X brings is that it is even more cushioned, more reactive and lighter, and from that, More v2 is 30mm thick at the heel and 26mm at the forefoot (although it rises more externally, but to encapsulate the foot and take it well held to the transition of the tread. The drop is only 4mm , but without a doubt, the amount of material in the midsole indicates that New Balance has succeeded. 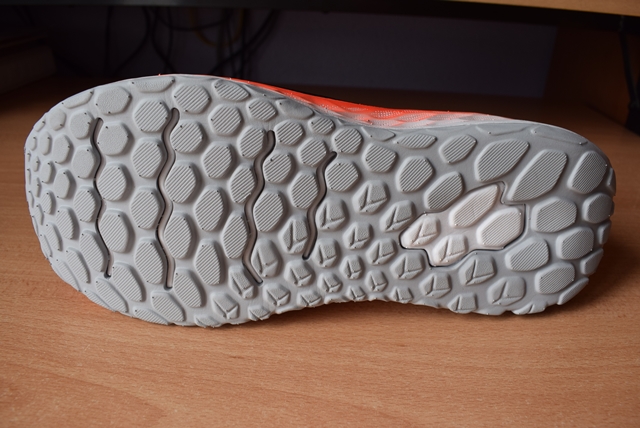 The New Balance Fresh Foam Morev2 sole is also surprising for its thickness since, although the longest studs are only 3mm, overall it is 5mm on average, reaching in some places up to 7mm in width. 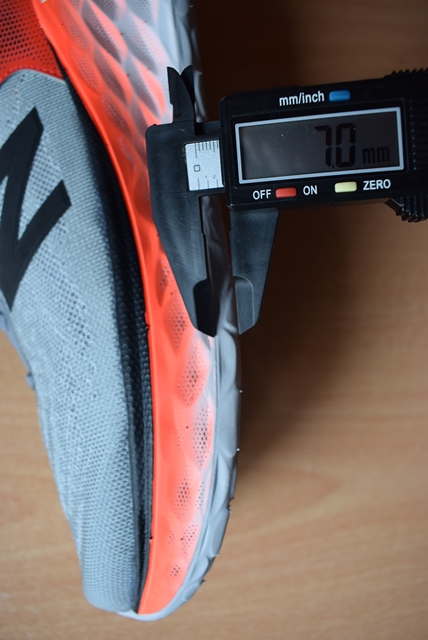 The material used is Ground Contact EVA of 65 degrees of hardness, a compound with great adherence and durability. Other characteristics are that it is very flexible and light.

In the front area, under the metatarsals, New Balance has arranged up to four transversal stripes that will allow the shoe to flex better during the transition of the tread. 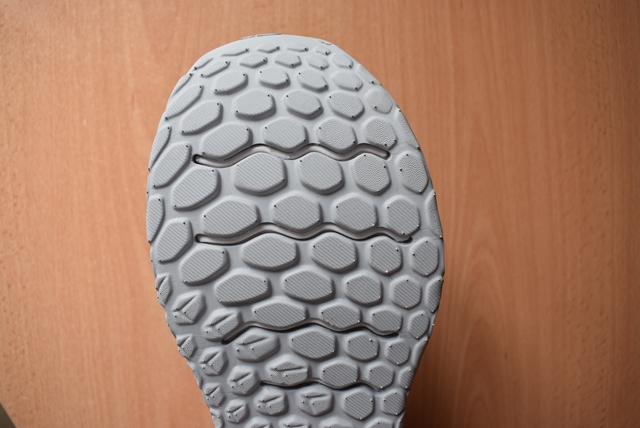 The taqueado is numerous, with also irregular shapes but that start from something similar to a hexagon, which allows them to pull in any direction. The contact surface, thanks to the generous size of the lugs, is wide, which also allows better traction as well as more stability. 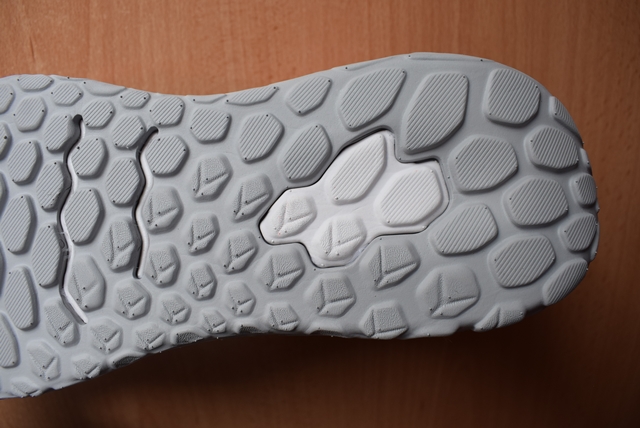 Instead, in the center of the heel area there is a rubber recess and the midsole material is visible. They scratch a few grams and the material is allowed to escape around here at the moment of maximum foot pressure, to quickly return to its position to wait for the next impact. 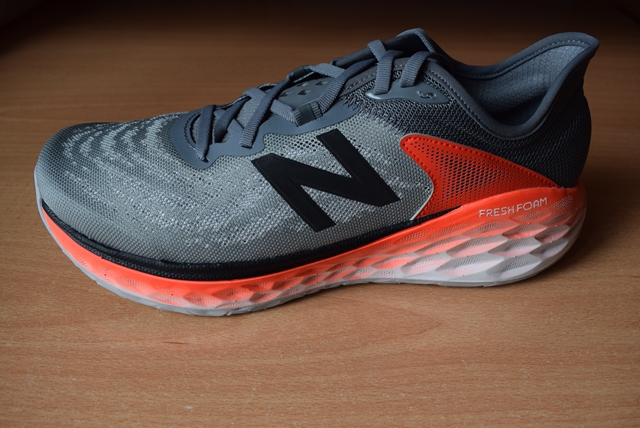 The upper cut of New Balance Fresh Foam More v2 is characterized by two different areas: the front, apparently simple, and the rear, with visible reinforcements. 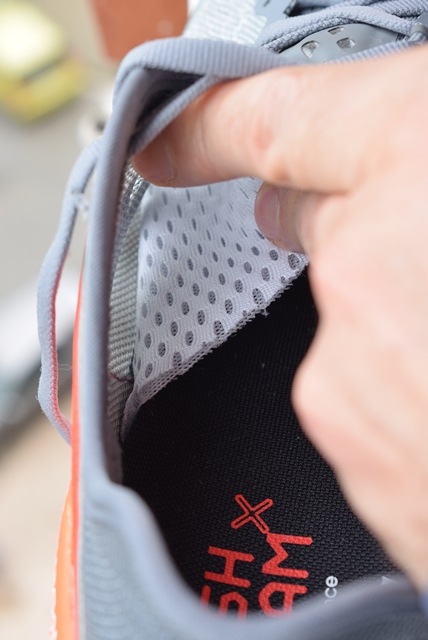 The engineering mesh that covers most of More v2 looks simple, but is actually packed with detail. To start, a double mesh is used, very open on the outside, with large holes for better ventilation and then there is the inside face, since from the midfoot to the toe there is a lining (perforated with the largest holes in the entire shoe) ) that would allow you to use it without socks, even. 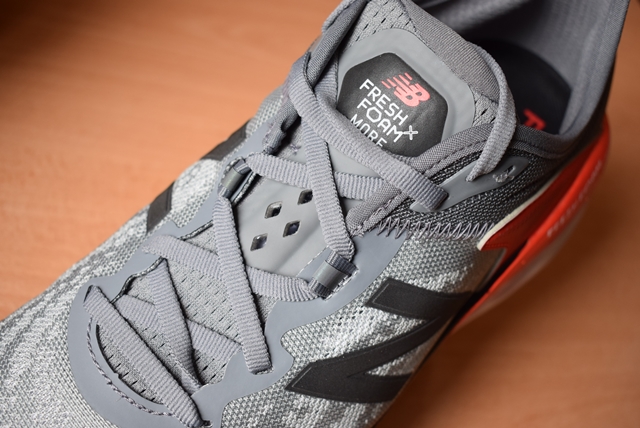 The laces are flat and have four eyelets plus a wide central strap, leaving a sixth point free (attached to the ankle) for those who want even more tightening. They are not passed through the tongue because it is not necessary: ​​it is joined by 2/3 to the body of the shoe. 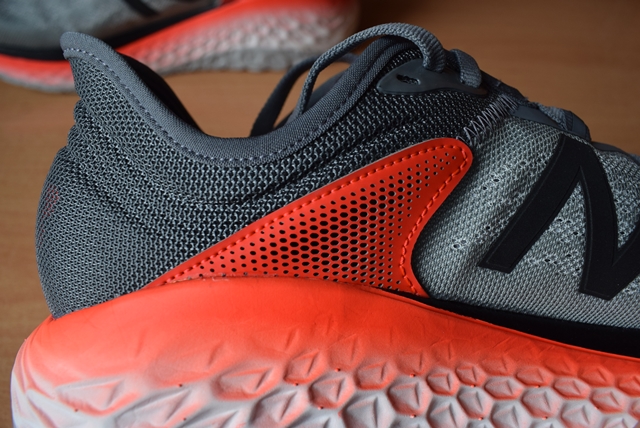 On the back, the heel is 3D molded to try to increase its efficiency and comfort of use despite reducing the material and volume used. In fact, if we look inside the shoe, we hardly see two protuberances that fit with the lower part of the malleoli, to hold the ankle with the minimum of everything and thus collaborate in that excellent low weight of the shoe in general. From this part there are still a couple of things to highlight. The first that the two lateral reinforcements in synthetic leather, make Ultra Heel do its job of stabilizing the ankle when it hits the ground. On the other hand, it is that the 3D shape is so high that it can be used as a shooter to put on the shoe with greater comfort or speed. New Balance Fresh Foam More v2 makes good the motto with which the American brand presents it: Made soft to work hard ... No more no less. This is a model with a midsole height with the only precedent from the first installment of More: no less than 30mm at the heel and 26mm at the forefoot. Lots of height, but for a drop of just 4mm. It is so because in this centennial brand they have been clear about what they are looking for: the model with the highest level of damping in New Balance.

Is a daily training shoe, but that due to its characteristics it should not clash in races, especially long distance races. The rhythms to which it would be used would be the most suitable for training based on filming, from 4'20 ”-4’30”, upwards with no limit to calm running.

Due to its high degree of cushioning and the careful stability lThey will be able to use runners of all kinds of weights. And beware, because if the first version lacked reinforcements in the upper, New Balance has corrected it and now it will hold more consistently. But above all they will be able to use all those who seek maximum cushioning. The sole made with Ground Contact EVA and the load-free upper help the final lightness of the ensemble. And it is that the weight is really surprising for all these characteristics since it drops even more than its predecessor and stays at just 271gr in the men's finish and 223gr in the women's one. 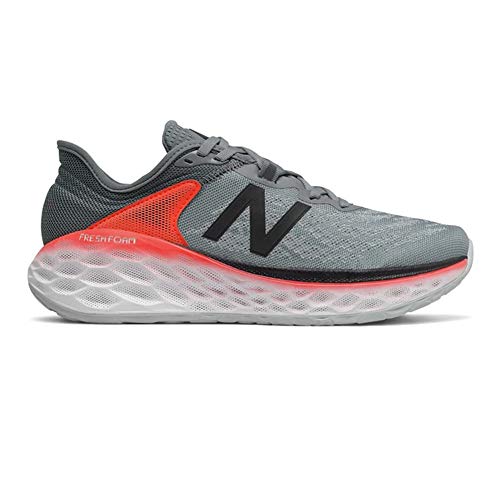 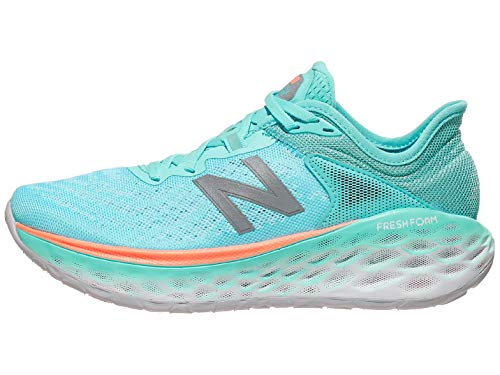