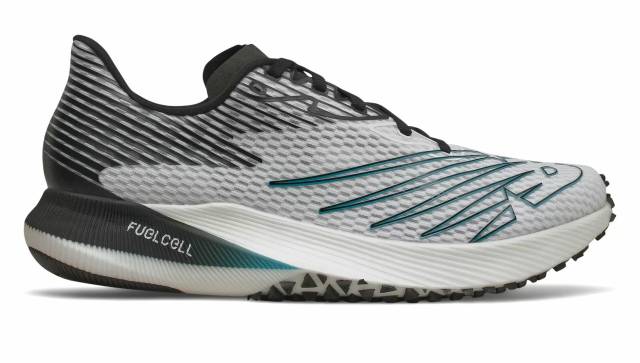 New Balance FuelCell RC Elite has finally arrived in stores, the competition shoe with a carbon fiber plate with which the American brand hits the table. And he does it to stand up to the already very tough segment of the flying shoes. His journey has been long and complicated due to the current circumstances, but, as we already explained in New Balance Fuelcell Collection with carbon plate, it does not complete a luxury equipment that allows choosing shoes with carbon plate for almost any specialty: from the middle bottom to the bottom.

A true thoroughbred this FuelCell RC Elite, where the Boston team spills their jar of essences again to obtain a shoe with high doses of energy return and rebound that, together with the carbon fiber plate, have to help the runner or runner to fight to improve their records, either in races or against the clock. 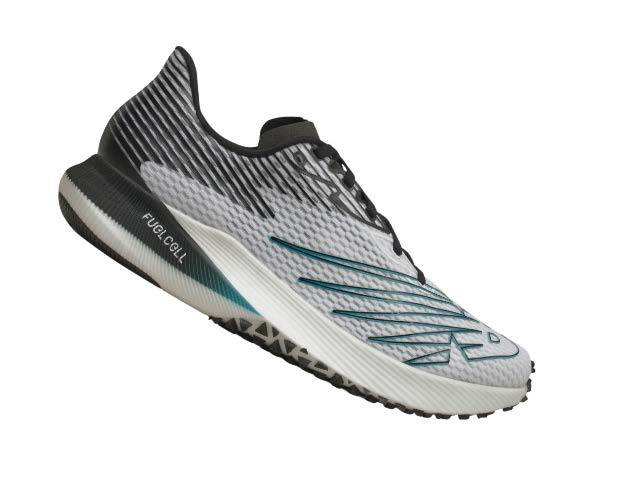 As I said, it comes in a period marked by the pandemic, but also by the World Athletics ban, which leaves some models ostracized from the ban (such as the prototype that Kipchoge used to lower the two hours …) that This is not the case with this RC Elite, which strictly complies with the legal and sports equality, how could it be otherwise.

But let’s go with this shoe, to see with detail what its characteristics are.

The New Balance Fuelcell RC Elite midsole is the most important part of the shoe. The American brand combines here a high-rebound and energy-efficient cushioned compound with a carbon fiber plate that will help the effort of those who see it and launch each and every one of their strides.

The material is FuelCell, hence the name of the shoe. It is a high-performance compound, but with a soft touch, which stands out from the rest of the standard midsoles due to its high rebound capacity. This allows a use of the energy that is produced when hitting the ground when running, so the sensation of reactivity is very present.

In addition, it is not “just plain” FuelCell since in this RC Elite the ACL process has been used, which combines TPU with different foams to achieve a higher performance FuelCell. The way New Balance achieves this is through a process that allows the granules of material to be placed in a pressurized chamber, to expand them. This creates a very light specific density (SG or Specific Gravity), with a high energy return, but smooth and with a consistency that makes it compatible with other compounds (such as the carbon fiber of the plate).

And precisely the fact that a full-length carbon fiber plate is embedded inside, only magnifies the rebound effect and helps launch the next stride. Of course, it must also be said that the FuelCell RC Elite shoe is aimed at better runners with previous experience or who run at already high rates and who want to improve. 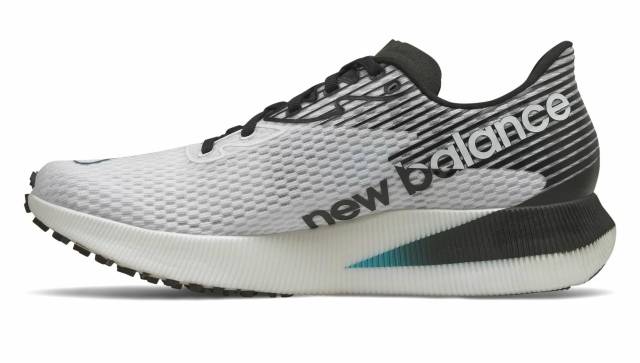 And if you look at it, on the side there is a small protrusion that reminds us of other New Balance FuelCell models, like Rebel at the time. The function is important: it provides stability in that lateral area, especially in the take-off phase, favoring a more efficient impulse.

There is a lot of material, so it goes up to 32mm in height in the heel and 22mm in the forefoot (with a logical drop of 10mm). But far from the 40mm limit set by World Athletics, so, by staying at a height comparable to a training shoe midsole, it can be said that, even being within the maximalist competition midsoles, it allows a certain sensation of the ground. , basic for those who like to spin fine when running.

Another important part of the New Balance FuelCell RC Elite is the sole. The use of the advanced Dynaride compound allows it to have maximum traction, as its main characteristic, although not the only one. Normally solid rubber is the heaviest material in all running shoes, but New Balance achieves a lightweight rubber with Dynaride, perfect for inclusion in this flyer. 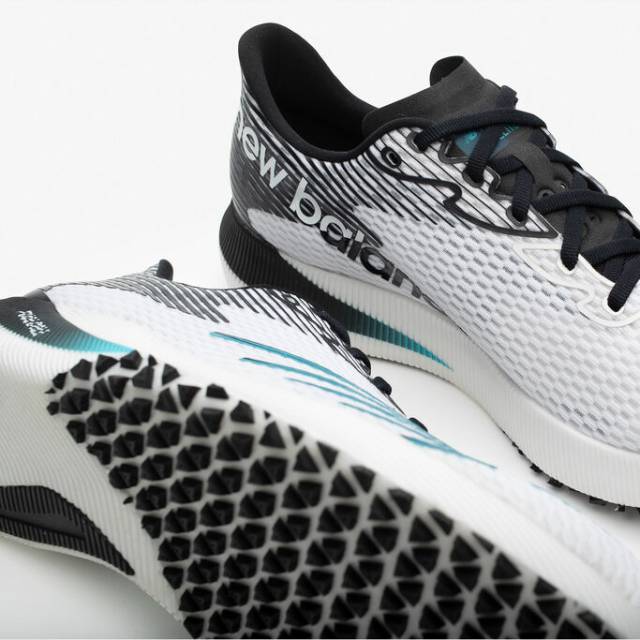 Traction and lightness allow this sole to adapt to different work environments, although it is mainly indicated for use in competition and on smooth and hard surfaces such as asphalt. The heel is divided into two large areas: the heel and the forefoot.

The entire front is a huge number of triangular studs. Around 200! They are placed in different orientations with the function of guaranteeing traction in all directions, in uneven weather situations and in any circumstance, adapting to the footprint of each runner by facilitating the flexibility of the shoe. Such is the search for traction that the studs reach up to the top of the toe box. New Balance has even put them here so as not to lose an iota of contact from the tack, until the moment of separating the foot from the ground for the flight phase. 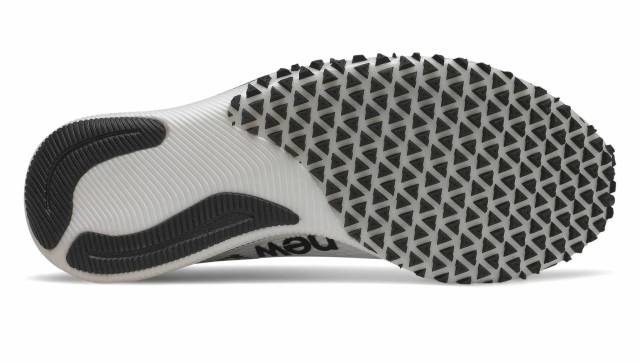 On the other hand, in the heel area things change a lot. In theory, for those who run on the metatarsal, this part does not have as much impact on the march as it does, for example, in daily training shoes. Even so, the design aims to protect the shoe from wear and tear, forming a horseshoe shape that, in any case, will facilitate entry to any type of footprint, even for those who heel.

The rest of the sole is the same cushioned material as the midsole, which reaches the sole and helps save rubber (which we have already said is the heaviest compound). As part of that general effort, the spectacular low weight of this RC Elite, which is 198gr, is explained.

The upper of the New Balance FuelCell RC Elite is made with a mesh that, how could it be otherwise, is very light. It is made entirely in one piece and has large openings on practically its entire surface (only the part that hugs the heel is closed). 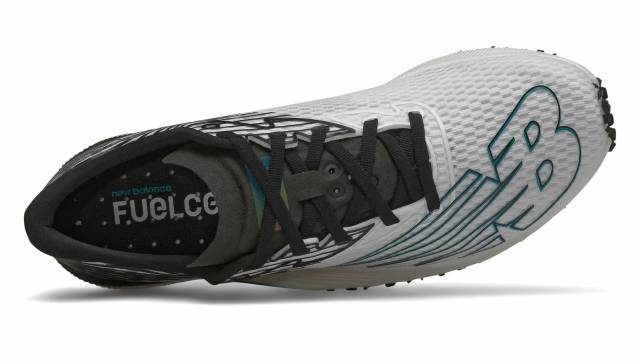 Light and breathable, thanks to its elasticity, it adapts to the shape of the foot very gently. Logically, it does not have rigid reinforcements such as synthetic leather (in those of I competed material must be sacrificed for lightness). However, the American brand, like others and herself in other models, uses her name and logo here to give the mesh a certain packaging, right in the midfoot. It is where it is most needed, although we also see it in the area of ​​the fingers, where you arrive with the logo that runs along the entire outer edge.

Yes there are some reinforcements although they are almost imperceptible. They are very thin films of transparent material in TPU (almost as thin as if they were adhesive tape), coinciding with the letters and that do that useful function of reinforcement and lateral support.

The laces are flat and are passed through only five eyelets (there is a sixth free), in addition to the thin tongue, so that it does not shift when running. By the way, the eyelets have printed overlays to increase resistance to possible breakage. Already inside, the insole is full of holes that have to favor breathability, while the entire part of the heel that hugs the ankle is thinner than that of its FuelCell TC companion.

New Balance FuelCell RC Elite is New Balance’s most advanced competition shoe, it is among the flyers with a carbon fiber plate and is aimed at elite or good level runners. It is indicated for all distances between 10K and Marathon (remember that New Balance has another shoe focused on short races, such as FuelCell 5280).

The weight of this RC Elite is only 198g, which is a great asset considering that the midsole has a generous thickness of 32 / 22mm (10mm drop) and that it also houses a carbon fiber plate inside. full length.

The ideal weight of those who use them would be a low or medium weight (perhaps within New Balance itself, someone fast but with a high weight could opt for the multipurpose FuelCell TC, also with a carbon fiber plate). The rhythms at which to use it: the maximums that can be, without a doubt, but to put a fact to this, we would be talking about that it would make sense to use them below the 3’40 ”-3’50” reference in a 10K.

The official price of New Balance FuelCell RC Elite is € 230.

This is the most painful part of the spectacular New Balance FuelCell RC Elite, as it will only be available at a few distribution points. Thus, apart from on the New Balance website itself or at its New Balance STORE point of sale in Gran Via, 15, in Madrid, and at a price of € 230, for now it will only be possible to purchase it at: