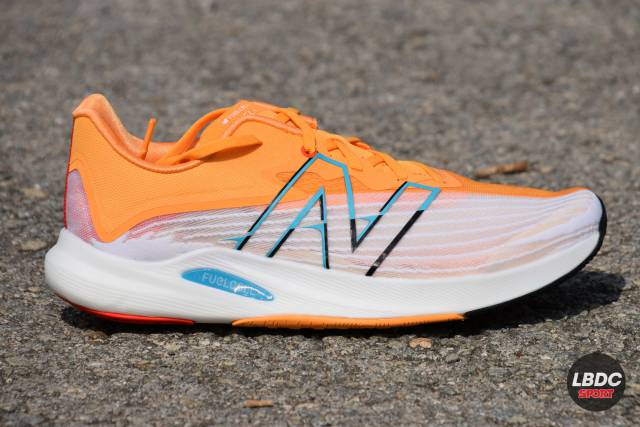 Today we analyze the characteristics of New Balance Rebel v2, one of the shoes to which the American brand is probably putting the most affection in its development. You just have to see all the tweaks made on the first installment to reach this finish that is aimed especially at training focused on competition and, which obviously makes it a very worthy option to take to competitions.

He’s moving quietly forward and honestly, it’s probably somewhat unfair that it’s not talked about anymore, because he’s a sneaker. And not only because of the two pillars that those of us who dedicate ourselves to dissecting sneakers always explain: design and materials, which is loaded with that. I say this because of the risky bet to open the way. Its predecessor Rebel, version 1, did honor to that, to be the first, so that the Boston people took out of the gift bag a disruptive model, in concept and in aesthetics. 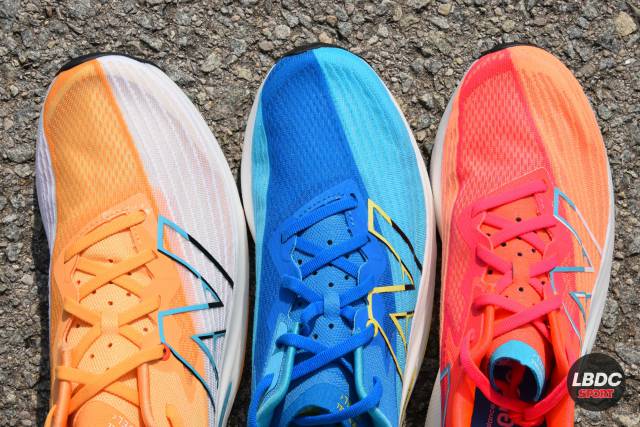 In New York, as the great launch that it was, we witnessed the arrival not only of the new Rebel, but of another sneaker concept such as FuelCell 5280, which I have referred to as the asphalt spike shoe par excellence … The fact is that Rebel v1 arrived as a different shoe in the field of mixed. The risky mixed, those that not only serve to train, but to give everything in the race. In fact, with them I dared to do what should never be done: they gave them to me on a Saturday and I premiered them the next day in a half marathon. Thus, directly: without a single meter of taxiing. And the result was spectacular. 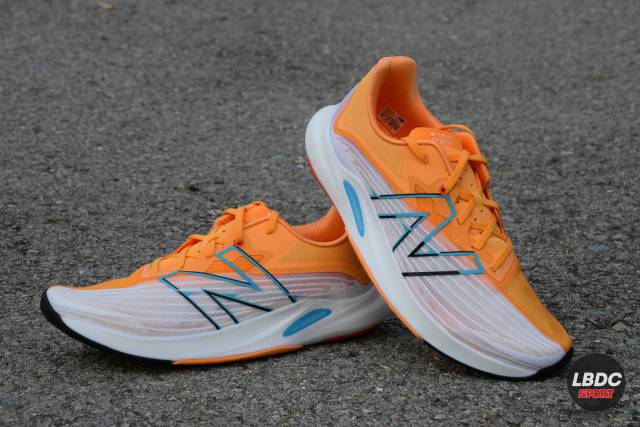 Now comes this renewed version that is FuelCell v2 and it certainly goes a little further. It is planted, without being a pure competition shoe, as a great alternative to the models with a carbon fiber plate that, now, are being imposed (as well as their very high and, in some cases, extremely prohibited prices).

Because yes, the new Rebel v2 is more “electric” thanks to increasing the rebound effect (in the section of the midsole I explain what New Balance has retouched to squeeze it even more), and it is even lighter: just 204 grams in the finish for men and 167gr for women. Let’s go with the details. 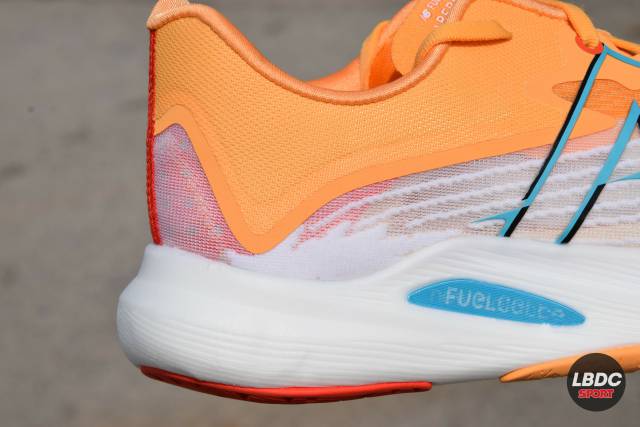 The New Balance FuelCell Rebel v2 midsole has been profiled by refining the bold design of the previous version, although the real change is invisible to the eye and it is called ACL.

The foam used to build the midsole is FuelCell, New Balance’s most reactive compound. What has happened is that those from Boston have screwed the formula more, obtaining a finish called ACL, which is a mixture of several foams and TPU and which is not present in all FuelCell models, only in the faster ones … That is to say, in the flying machine with FuelCell RC Elite carbon fiber plate, FuelCell Lerato (training, but also with plate, and which is just getting browned in the New Balance oven: in May we already have it here) and FuelCell TC (a marvel of shoe that, with a carbon fiber plate, can be used for training and competition). 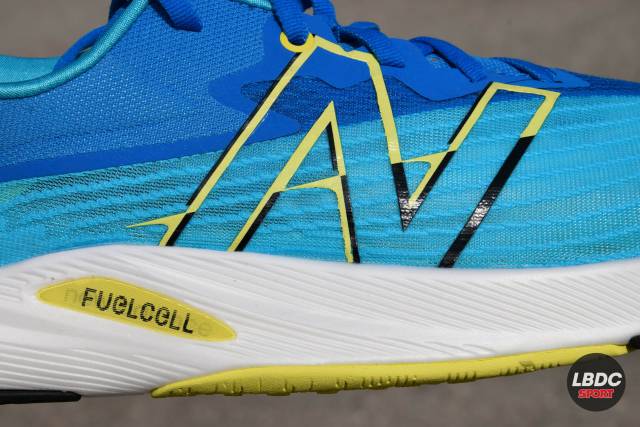 That is to say, to be clear: FuelCell in the ACL finish gives greater rebound, has more compression capacity, is lighter and increases energy return by 14% … and the only shoe without a carbon fiber plate that carries it. is FuelCell Rebel v2. This is one of the reasons for so many to say that Rebel v2 is one of the best alternatives to go very fast, compared to shoes with a plate. 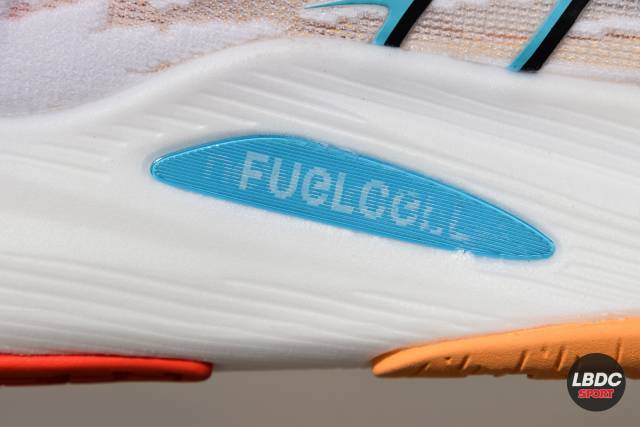 At the design level, the most striking change (apart from the hologram that changes from FuelCell to New balance and vice versa) is the reduction in width. In Rebel v1 it had a clear function of improving midfoot support and thus favoring the running gear. Now it’s like it’s been scraped a bit to fine-tune it. It’s still a bit wider, but it’s not as prominent (maybe someone was scared of such a bold design?). Be that as it may, it still has that stable point in support on the outer surface of the metatarsals.

Another element that changes in Rebel v2 is the height, the thickness of the midsole. It goes from 24mm in height at the heel to 26mm, and from 18mm in the forefoot, to 20mm. You don’t have to be a mathematician to notice that the drop remains the same: 6mm. What has been gained from this change? Well, if it has been changed that the previous version had mostly REVlite, stuffing a part of FuelCell inside, and now everything is FuelCell, but it also improves, and on top of that it is expanded by 2mm more material … well there is the jump qualitative in terms of cushioning, reactivity, rebound and lightness. And the truth is that the jump is important. 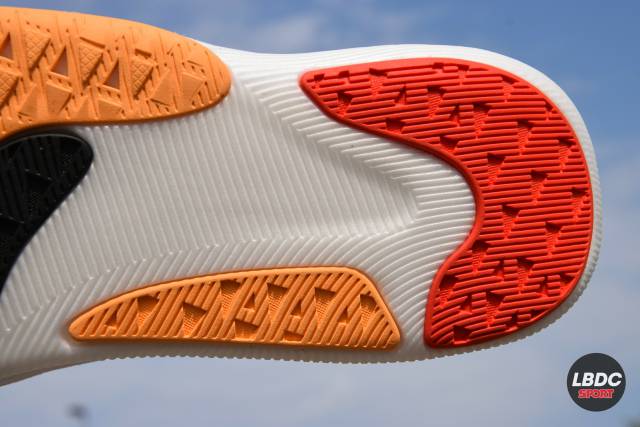 The New Balance FuelCell Rebel v2 outsole uses two types of solid rubber. The first is NDurance and is the one that is located in the areas of greatest wear. Since these types of rubber are heavy to be resistant, it is only and exclusively used where it is most needed: on the heel.

Instead, most of the remaining sole, the entire midfoot, under the metatarsals and toe is a much lighter type of solid rubber. But what makes this type of rubber more useful is its very high adhesion capacity. Something basic when running, but much more the faster you go. And that is known by those who run clearly below four thousand and take turns with worn asphalt or even with paint of pedestrian crossings, to give two examples. 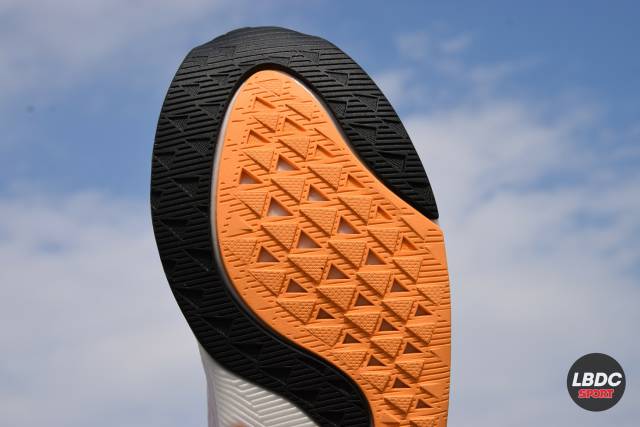 Parallel to the midsole, the highly visible protrusion of the Rebel v1 is hardly prominent here as it has been greatly softened. It does help, which is the intention in this model in which the midfoot support is so important, but it is not so prominent.

For the rest, what we have in Rebel v2 is a sole with a multitude of medium-sized studs. Crosscuts in the stud for grip and to facilitate flexing of the shoe. The fact that the studs do not grow more than one or two millimeters and that some are even inserts in the rubber of the sole, define it as a very focused shoe on hard surfaces such as asphalt. 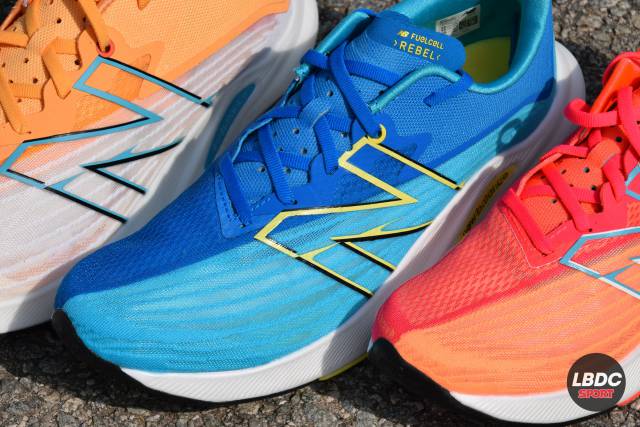 The New Balance FuelCell Rebel v2 upper is very light and is constructed with a single layer, without seams. In fact, the mesh is so fine that light passes through it (if the fingers of the hand are inserted it is possible to distinguish them). It is Lace Knit and it is a type of mesh made of a perforated thermoplastic material (in the previous version it was a Jacquard type mesh)

Of course, there are obviously areas with reinforcements, especially on both sides, leaving the most breathable (to say the least, because all of it is exaggeratedly breathable) in the front, right where the fingers. 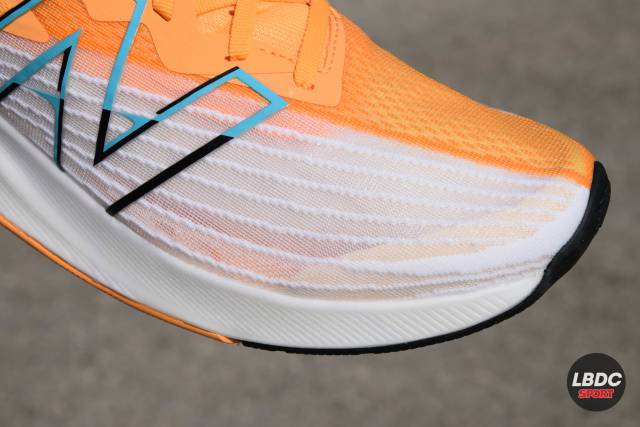 There are other reinforcements in the places of maximum tension, that is, those of the laces, since these have to pull the mesh so that it closes on the foot and holds it. This material, which is like a synthetic leather, is joined by heat sealing (without seams) bordering an asymmetric eyelet system (four eyelets on the inside and five on the outside, just the one that New Balance reinforces with the shape of the midsole. and sole. 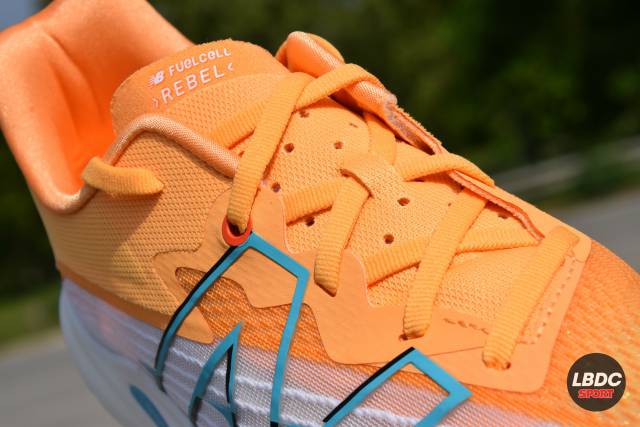 The laces on this Rebel v2 are flat and underneath they hide a thin, short but padded tongue. It is all full of very large perforations, for what is usually usual (in which they are perforated), of three millimeters, which shows the work of NB to improve ventilation. It is not attached to the body of the shoe, but since it has the laces running through it, it is guaranteed that it will not shift during use. 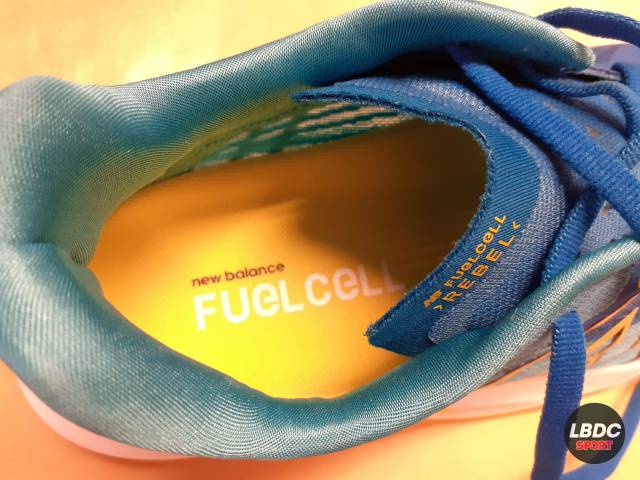 The inside of the bowl is quite comfortable for what you might expect. It is true that mesh, being a single layer, does not have an inner lining, but it is very soft to the touch. What is padded is everything that surrounds the ankle, so that the fit is strong, but comfortable. And underneath a thin insole, also three millimeters, will make the feeling of comfort appropriate. 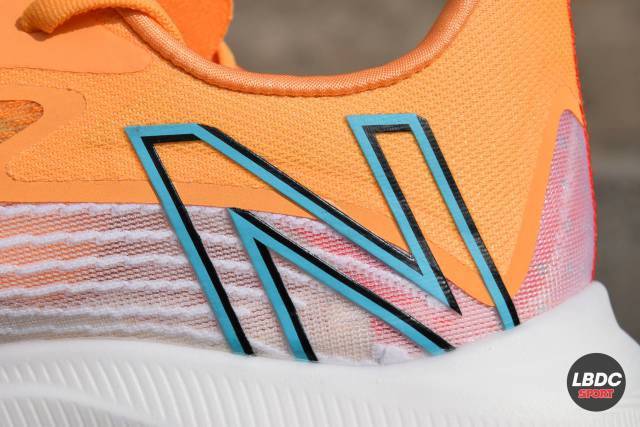 Finally, it must be explained that the heel area does not have much structure, which is normal in competition shoes and in some mixed shoes, such as this one. This is mostly to reduce overall weight.

New Balance FuelCell Rebel v2 is one of those mixed sneakers that they are so close to those of the competition that it could also receive that treatment without anyone being able to claim many things against it, rather the opposite. It can be said that it is a great alternative to shoes that use a carbon fiber plate inside, due to many of its impressive characteristics, starting with its lightness: 204gr in the masculine finish and 167gr in the feminine one.

This is possible thanks to its structure, but above all to the use of a midsole built with FuelCell material in its ACL finish, present in competition shoes and capable of increasing in 14% more energy return of a compound that already excelled in that regard. The thickness is 26mm at the heel and 20mm at the forefoot, resulting in a 6mm drop. In addition, the width in the midfoot makes it stable even at explosive rates.

The sole predominates over a type of very adherent solid rubber that in the areas of maximum wear is combined with the most resistant rubber from New Balance: NDurance. On top, the upper uses a very fine and breathable mesh that also makes it very light.

Ideal for runners of medium or low weight, it is so light and adaptable that it makes it without a doubt one of the best options for fast training focused on competition … and for the competition itself.

The official price for New balance FuelCell Rebel v2 is € 140.