We analyze the characteristics of New Balance Summit Unknown v2, a model of trail running focused on competition that is inspired by the running racer models to obtain a product to give it all on the mountain.

If New Balance delivers this great competition model, it is not far behind as a training company within the Summit family, with Summit KOM and Summit QOM Together they form a team to train and to finish the job on trails of all kinds, given the Summit Unknown v2 versatility as a competition shoe for the mountain.

Obviously, without detracting from other trail running companions from the brand itself, such as the Fresh Foam Hierro v5 or the Trail version of Fresh Foam More. If it must be said that Summit Unknown v2 stands out above them, it is because of that marked competition accent, based on a very low weight: 250gr in the male finish and 213gr in the female one. 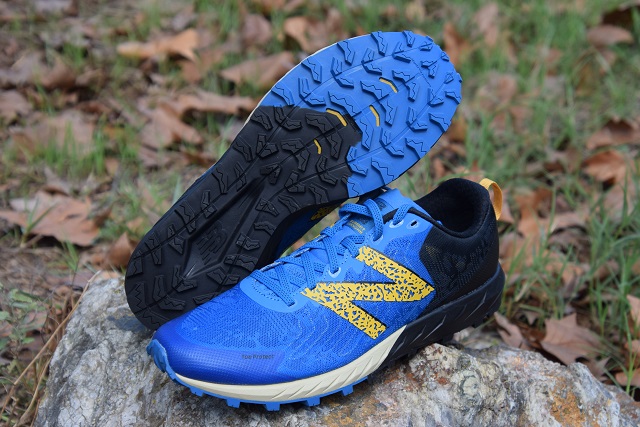 But it has more arguments: its HydroHesion rubber sole has a very aggressive design, valid for all types of terrain, even the softest and most muddy, and inclined … Above it, New Balance mounts a light, cushioned and reactive midsole, in RevLite material.

And the upper. It is the great renewed since it has been changed to seek greater comfort of use, without neglecting fit or stability. What was said: a racer for the mountains… We see it. 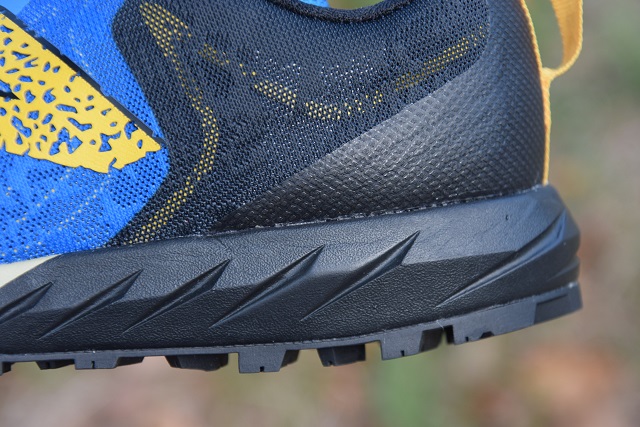 The New Balance Summit Unknown 2 midsole is built with the lightest cushioning material of the American brand: RevLite. This compound has a lot of travel in fast asphalt shoes and now it is in this model that fits like a glove.

This is so because RevLite is capable of cushioning the footprint, yes, but in addition to providing the lightness that I mentioned before (30% less than other standard cushioning materials), it has an extra reactivity. 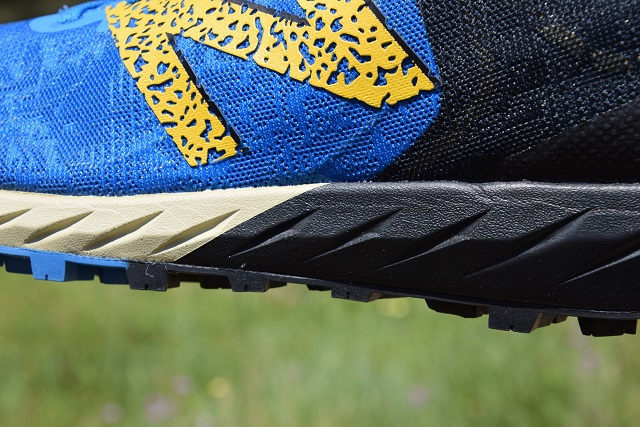 New Balance, a brand that works a lot on geometries (it must be remembered that it does not use auxiliary damping systems like others, which use air capsules, gels, pébax pieces, for example), delivers here a design where it achieves that this polymer help to propel us with firmness and a point of stability. eye! Stability understood from the point of view that it is a shoe for runners with a neutral tread or footbed.

The touch is firm, since RevLite is already like that, but also because the shoe is intended to go fast and for this the American brand has thought of a lower profile than a high one. On the other hand, for those who are interested in the drop, which is the difference in height between what is the base of the heel and that of the forefoot, say that it is 10mm. 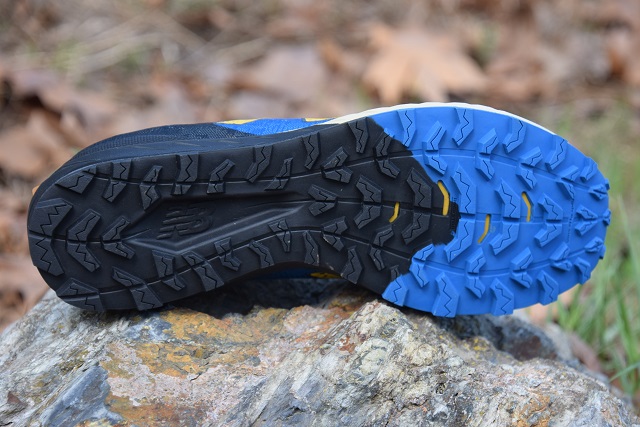 The sole of New Balance Summit Unknown is made all with HydroHesion material of the American brand. HHR (HydroHesion Rubber) is a compound that increases grip, especially on wet terrain. Durability is another important feature that this type of rubber outsole provides. 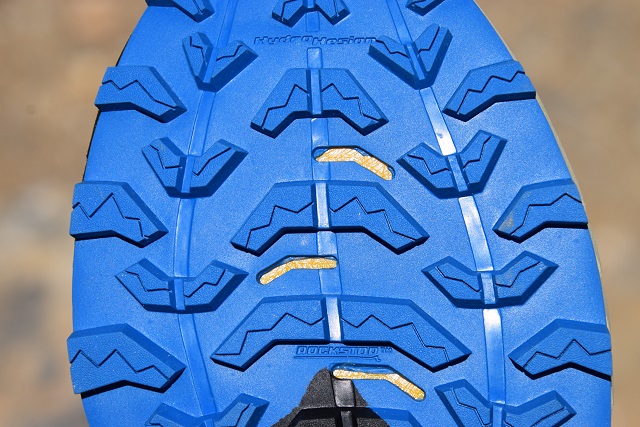 A very important element protrudes the nose between the midsole and the sole and is visible from under the shoe, if we look just under the metatarsals. Four holes allow ver an internal board, called RockStop whose function is precisely what its name indicates: to protect us from any external element that wants to be nailed in the shoe (stones, rock points, roots, etc.,…).

RockStop is visible only under the metatarsals, but actually occupies up to three-quarters of the entire sole of the foot, indicating the high level of protection. And although it may not seem like it, in the case of a plate, it does not prevent the shoe from flexing quite well, especially the part of the fingers, (perhaps the most important), so this great protection does not penalize the flexibility of the entire shoe. It is not only noticeable with them on, as it is easily verifiable by bending it with your hands. 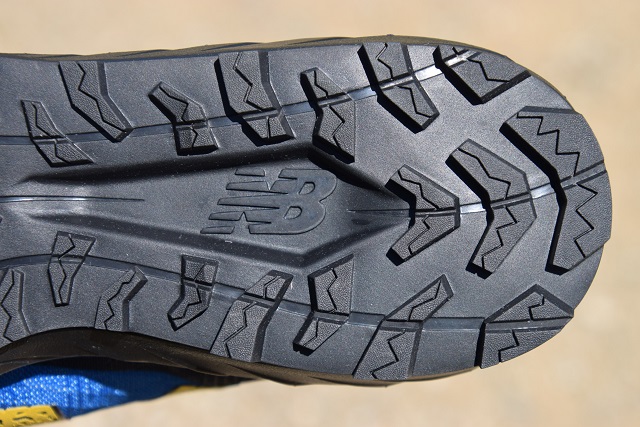 At the design level, it should be noted that the configuration of the stud allows traction in a multidirectional way. Precisely the studs is something that changes because now they have 2mm more reaching 5mm in depth, so Summint Unknown 2 will pull well on all terrains, even the most technical and / or steep. 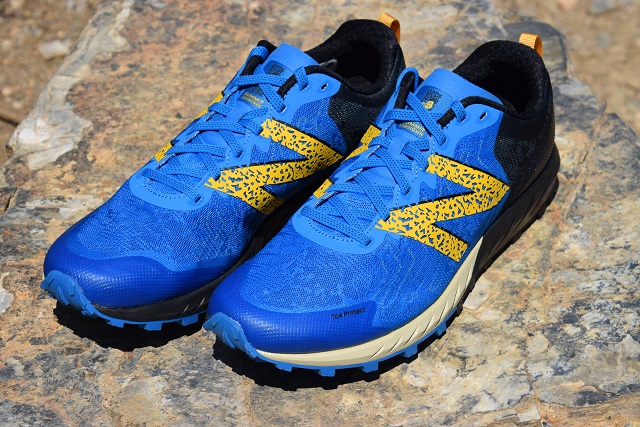 The upper cut of the New balance Summit Unknown v2 has that air between simple and minimalist that characterizes the sneakers focused on the competition. But it is only the “air”, because the upper hides a series of advantages in which the Boston team have not spared details. New Balance has completely revamped it to advance better comfort and support, but there is more. 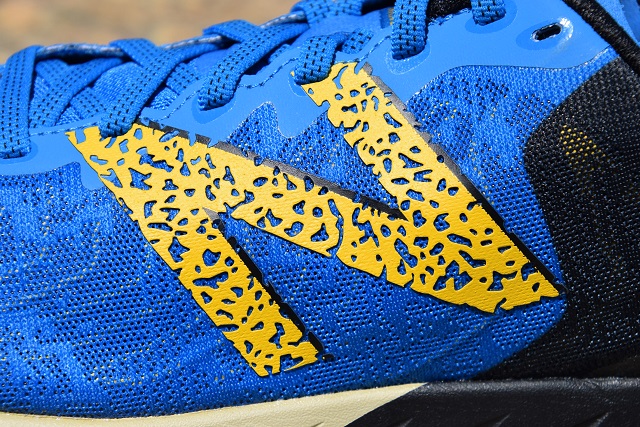 To begin with, the mesh is made with a fabric that incorporates a thermoplastic finish that makes the material more resistant to wear and tear and possible snags that could occur when running through a mountain environment. But unlike other shoes, this reinforcement does not penalize breathability or flexibility in a shoe that cannot stop being agile and adaptive to any circumstance so as not to interfere with the fast pace that a person needs to wear. 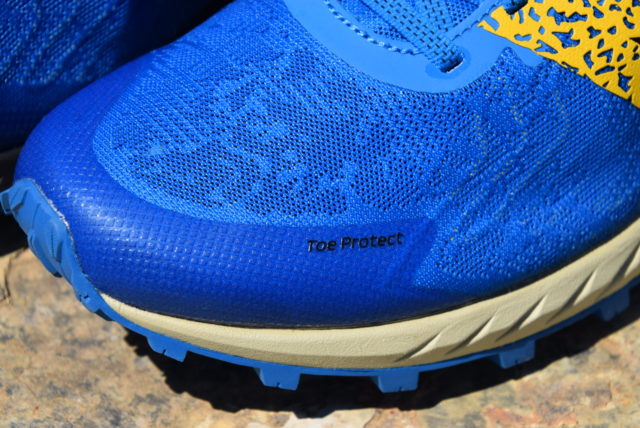 The toe cap is reinforced with the ToeProtect technology that New balance has been developing for a long time. It is a thermo-sealed TPU material on the mesh which, together, protects from external elements or technical routes where any small thing that we impact against is minimized and does not interfere with the march. From behind, the entire toe area is where the Summit Unknown v2 mesh is more open so that they are as ventilated as possible. 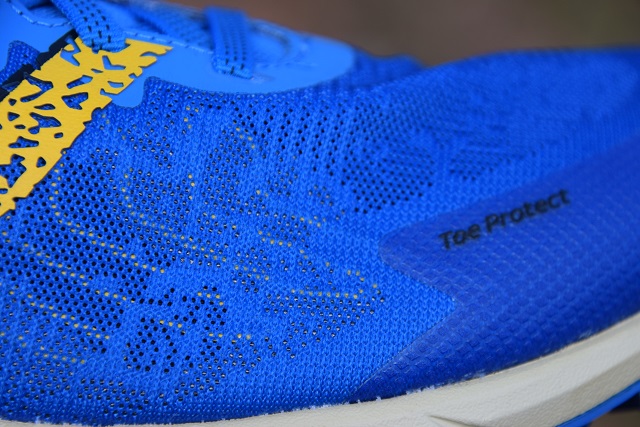 Both sides of the shoe are discreetly reinforced. The discreet thing is not for little, but because it is a kind of thread that snakes through the inner and outer face making that when the loop is closed, the eyelets pull it and that entire area, hugging and holding the foot. Those laces are flat and are passed through up to six eyelets, leaving a seventh for those who want to tighten more. 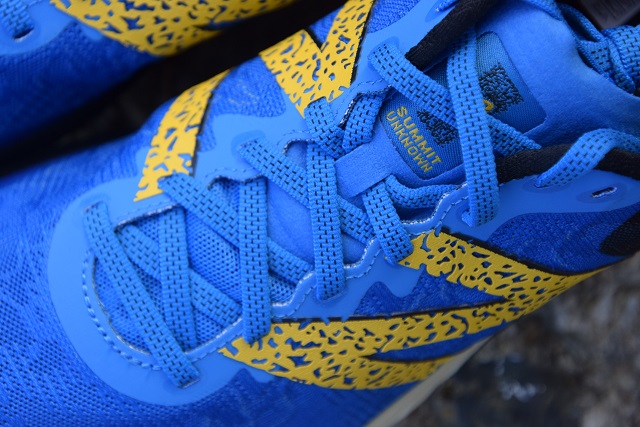 The tongue is made of microfiber and logically helps in adjusting the foot and making it as comfortable as possible. It is attached to the body of the shoe on both sides with a net whose function will be that any small object or particle that can jump and try to enter the shoe, stays there and does not penetrate to the base of the foot, avoiding that annoyance. Inside, the template (can be removed to put your own) is perforated so, in the event that no water enters, it is ventilated and dried as soon as possible. 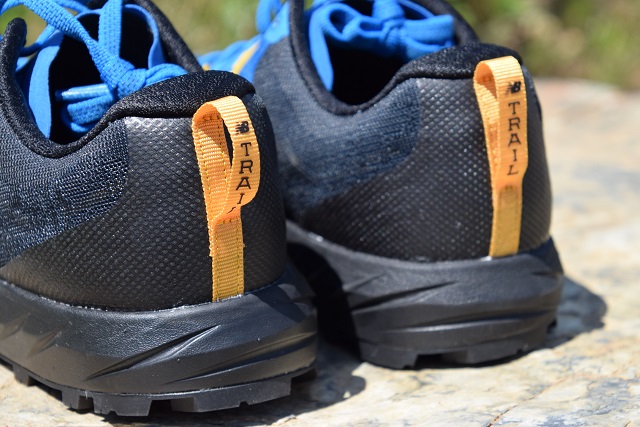 If someone thinks that, being a competition shoe, it will not be very stable when falling against the ground, it only remains to fiddle with the entire part that hugs the heel from behind to see that it is rigid. This is to stabilize the foot when it hits the ground. And for those who usually find it difficult to put on their shoes, tell them that this buttress is crowned by a handle that is very useful when putting it on. 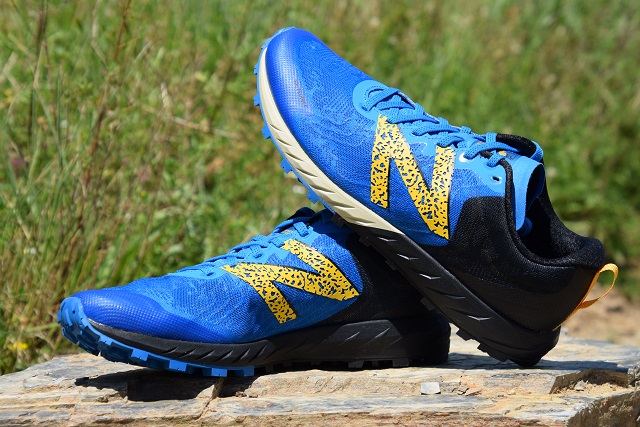 New Balance Summit Unknown v2 is a Trail running shoe designed for competition. Without a doubt it is a great option for those looking for a good weapon in short distances, whether they are “easy” or if they are technical and demanding terrain. Another environment where to squeeze them to the fullest could be in the VK (vertical kilometers) given its general configuration, but especially of the sole.

The sole precisely, with those 5mm studs and with space between them, will pull on any surface since they are made with HydroHesion, a material that works well, also in the wet.

Given the object for which this Summit Unknown v2 is designed, the ideal runner profile would be that of those who have a light weight and are able to carry a demanding race pace that makes it good that this is a shoe inspired by racer models for asphalt, but for use exclusively in the mountains.

The cushioned RevLite midsole, with a 10mm drop, follows the same line thanks to its lightness and reactivity. The lightness is transferred to an upper that uses a mesh that is also light and breathable, but also with a great support capacity in the midfoot area.

A Gore-Tex finish is the alternative for those who run or compete on terrain where the weather is adverse and extra protection never hurts.