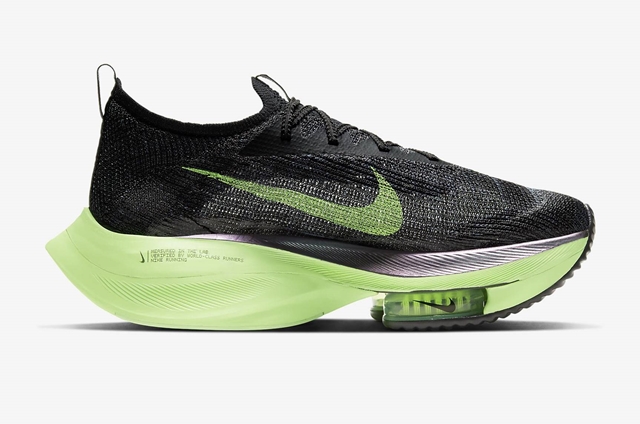 Nike Air Zoom Alphafly NEXT% is a twist on the American brand in the current concept of competition shoes: groundbreaking designs, materials stretched to the maximum and marketing campaigns as only great puppeteers can think of.

And money to espuertas… And dedicated to more of the same: to the own product but mainly to media campaigns like only those of Oregon know how to handle.

Can the feat of Kipchoge in Vienna in 2019, falling from 2h in the marathon distance (although not officially approved), be considered as the biggest shoe spot in history? Could be. Those 42k traveled at an average of 2'50 ”per kilometer, were broadcast live, but more than that, the achievement was reproduced by all television, radio, specialized press and the one that did not (and both on paper and digital) ) and, in general, by any type of means. 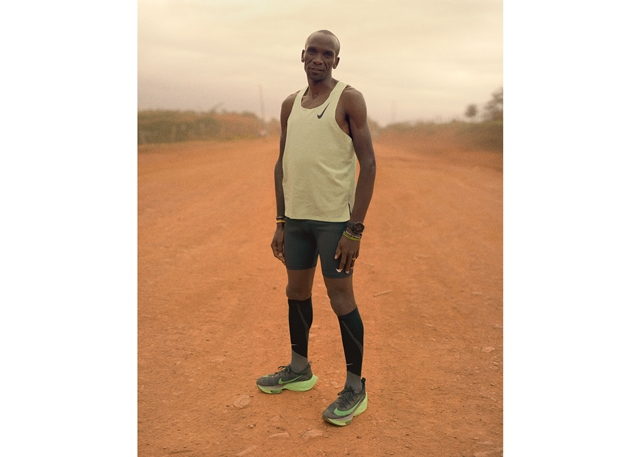 The event achieved an impact without equal in which a small winner was athletics ..., but where the great beneficiary was, undoubtedly, the giant of the distribution of sports equipment that is Nike, Inc.

That day, everyone had their sights set on the great novelty of the attempt, the signal magnet beyond man: the sneakers. Kipchoge ran with a prototype of a new model. The shoe we touch today is the end of this entire production chain: Nike Air Zoom Alphafly NEXT%.

Before Vienna, he tried it at Monza in 2017 with another new model, the prelude to Alphafly: Vaporfly. He did not succeed then, although the mistake in the mark obtained had enough impact for Nike to compensate for the amount of money spent on the project. And they turned off the tap to a new attempt. This is when Jim Ratcliffe, the richest man in Britain, arrived and brought his petrochemical company INEOS without a shoehorn (that is, with bills) to name the new attempt. Nike accepts and the rest is history. Alphafly went from a project in the shadow of Vaporfly, to a reality with the endorsement of the genius born within the Nandi ethnic group, in Kenya. 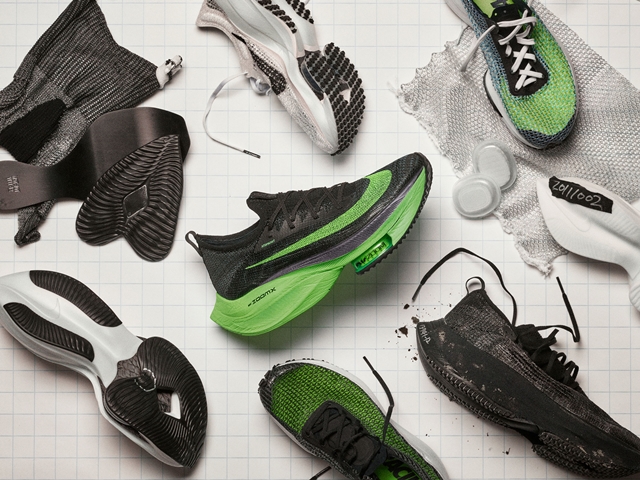 But no matter how good this runner is, he has stood up (and painted) the face throughout his career to contemporary Olympic and / or world champions (such as El Guerrouj, Gebreselassie, Lagat, Farah, Bekele, Kipsang, Kimetto and so many others ...), the feeling was in the feet. Nike Air Zoom Alphafly is the result of the sale of all this technological experiment.

And that this AlphaFly is not exactly the shoe that Nike would have wanted to put on sale. The prohibition of World Athletics (the former IAAF) in the face of the controversy generated after the Kipchoge record in Vienna, has caused the height of the midsoles to be limited or the carbon plates inside to not exceed unity (the prototype patented by those in Oregon are said to have up to three carbon plates.) Failure to comply with these requirements invalidates any result or record obtained. Little joke. 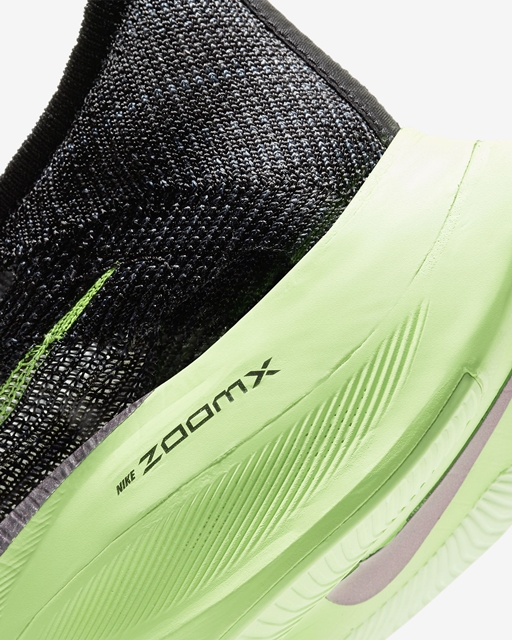 It can be said that the Nike Air Zoom AlphaFly midsole is very easy to explain: three elements that, combined with each other, give an enormous performance.

The first element is a new foam, much lighter, much more reactive, with a rebound capacity like Nike had never had before. 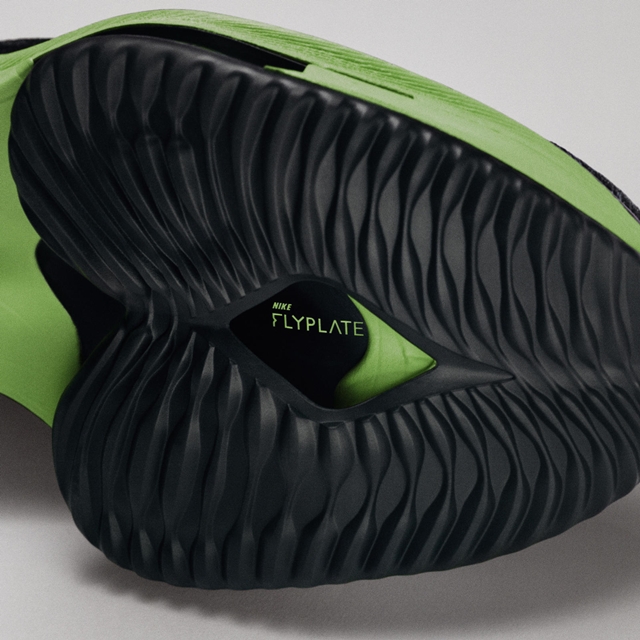 And it almost hides the second: the carbon fiber plate inside. The big difference is that in Vaporfly this plate is not seen, while in the new AlphaFly, Nike has left a gap where it can be seen and it is even allowed to write "FlyPlate" on it, to make it very clear. Its function is to stabilize the set, promoting a transition that favors the stride launch thanks to its reactivity. All thanks to a rigidity that affects the propulsion. 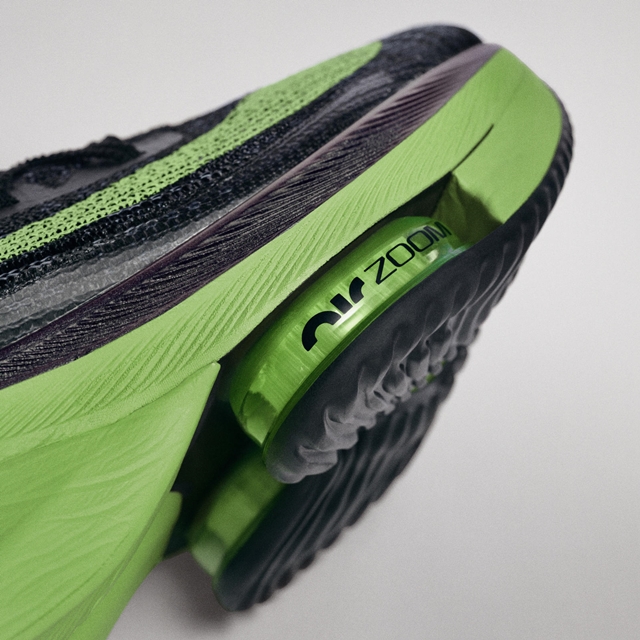 And the third element: the Zoom Air capsules (plural because there are two) and that are located just under the metatarsals: in the place of maximum impulsion. They are highly visible and give it an even more spectacular air. Nike sneakers with an inner tube can show it or not, but it is true that those in the front area are practically never in sight except for models from the AIR MAX family. Nothing, nothing ..., make it clear to whoever buys it that they take what they pay, without imagining anything, as was the case with the Vaporfly carbon fiber plate, that people had to "trust" Nike by not be visible in that one.

Midsole height was part of the debate and stretch-and-loosen with World Athelics. Now, according to Nike, it complies with the regulations thanks to its heights of 35mm in the forefoot area and 39mm in the heel area, to give about 4mm of drop.

The sole of the Nike Air Zoom AlphaFly NEXT% is clearly separated into two zones, as they have diametrically opposite missions.

The easiest to explain is the back because ... There is hardly any sole! In fact, the largest sole extension here is the cushioned midsole material itself, ZoomX, which is highly visible here and can be touched and even plunged with finger pressure. But not everything is ZoomX because, almost hidden, there are two solid rubber plates to make this area somewhat more durable. Why are there hardly any reinforcements? Very simple, for a shoe designed to fly, it is assumed that whoever uses it will run from metatarsus and, therefore, a component such as solid rubber, which is inevitably heavy, is not as necessary. 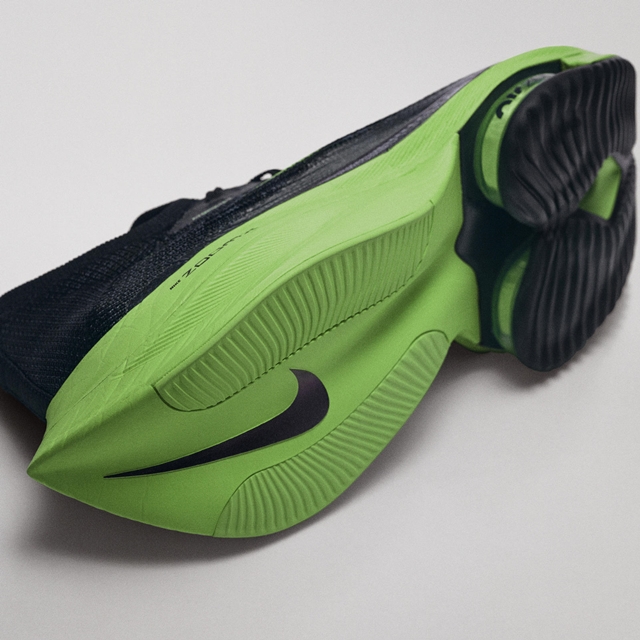 Now the front part of the outsole: input looks very, very aggressive. So we have to start here with the design. Those wavy grooves, arranged transversely, will be responsible for the traction of AlphaFly NEXT%. And it's critical, because not having traction when you want to go fast would be stupid in a shoe of this caliber. Adhesion is achieved by the material: a rubber that has to deal with adhesion (a lot) and durability (enough because the shoe has to run, rather than last, ... that is not its primary objective).

That this solid rubber and that striated design is mainly under the metatarsals and especially under the Air Pods (the air chambers) already clearly states that its function is to hold on forcefully to launch the stride with force forward. 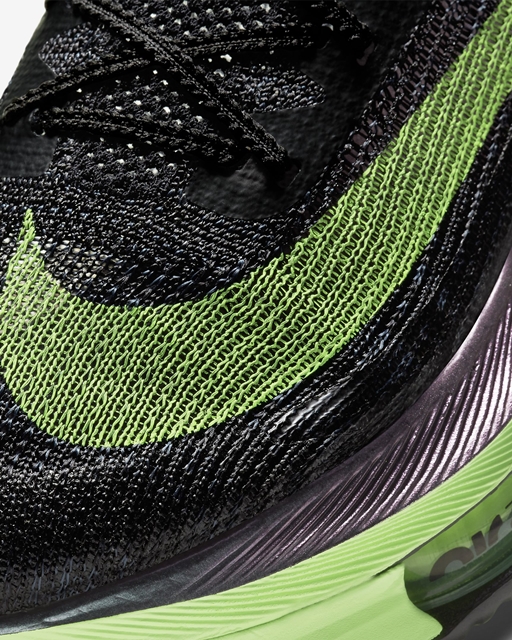 In the upper of the Nike Air Zoom AlphaFly NEXT%, the mesh that uses AtomKnit technology stands out. To the function of any mesh, it adds a very low weight, with the idea of ​​compensating somewhat for the amount of material embedded in the midsole.

It follows the evolutionary line of Flyknit, widely accepted in the “Nikeros” community, although it is more focused on competition, since it seeks a firmer grip and not so much a high level of comfort (as the Flyknit mesh does). Atomknit is breathable and does not retain sweat. It runs through the entire surface seamlessly and firmly, with the laces integrated and with eyelets reinforced with a very thin layer of heat-sealed material. 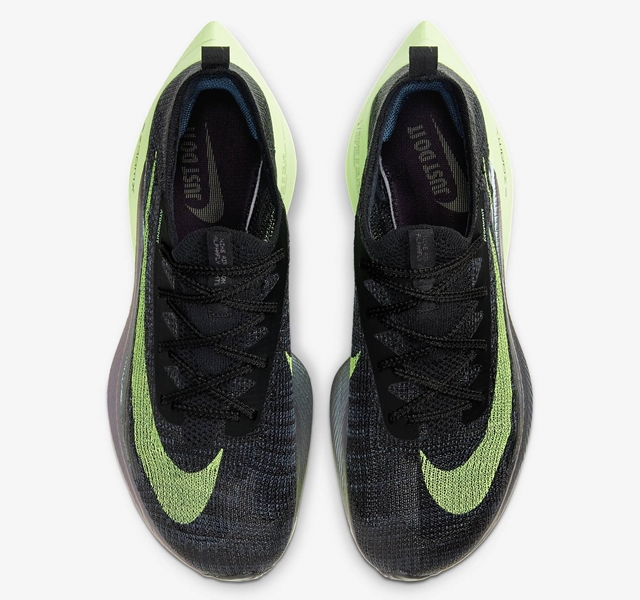 And watch out, that the internal template of AlphaFly NEXT%… As usually happens in some competition models, it is glued so that it does not come out. Therefore, it is either started, or it will be difficult to introduce a custom insole (it would raise the foot, reducing its natural space inside). If already without touching the source template, we recommend half a number more than an @ use, if you have to add another template, things get even more complicated. 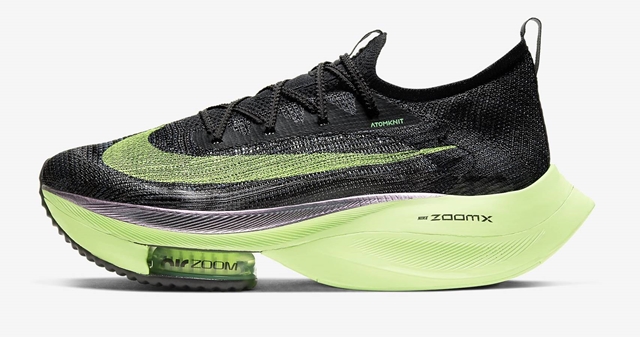 In the heel there is a handle that helps to put on since the entrance is not loose, to hug the foot as much as possible. And it does not have a tab as such and is part of the structure of AlphaFly. This part, that of the bowl, has the given shape to adapt to the malleoli, even with pads to fit perfectly.

Nike Air Zoom AlphaFly NEXT% is a shoe focused exclusively on competition and for use in quality training to adapt and warm up for racing. Enter the select group of flying shoes directly thanks to a design and materials of exceptional performance.

The star part of AlphaFly NEXT% is the midsole, thanks to the cushioned, light and reactive material that is ZoomX, the carbon fiber plate that it includes inside, and a new location of the air chambers, all for a better ride In race. The sole and upper complement a design that looks radical, but also maximalist, far from what a flyer has always represented, in that sense.

Despite that large aspect that gives the thickness and elements of the midsole, the weight is incredibly low, since it is only 210gr.

The rates at which they are used are the maximums that one or one can take in the race, but here it is necessary to put a data and that is that for averages greater than 3'30 ”a thousand, perhaps it will lose sense to pay what they are worth, that is not little. Distance is another thing to consider because thanks to its exaggerated midsole, the best performance will be obtained in long distance races, where the half marathon and the marathon clearly stand out.

Competitors of other brands that focus on competition and with a highly developed midsole there are, that although people talk as if there was no life beyond VaporFly or AlphaFly ... ASICS, with Metaracer or competitor of Tempo NEXT% which is Novablast; New Balance with FuelCell Racer Elite (this to come, although you can already enjoy a great model like FuelCell TC, which Tempo NEXT% will have a hard time overcoming); Adidas, with Adizero PRO, its first competition shoe with a carbon fiber plate; and others, in a fierce battle that consumers should be able to win.

The official price of Nike Air Zoom AlphaFly NEXT% is € 300.