Nike Air Zoom Pegasus 37 is here. The new one release This best seller in the segment of daily training shoes of the American brand comes with new changes, important changes, especially in the midsole.

A new thread turn to the material, now React Foam, and also some surprise in the inner tube they make Pegasus always in the limelight. There is a reason that it is the favorite shoe, not only for runners and runners today, but for generations of them, since since the first half of the 1980s, when it was born as a model, it has continued to succeed. 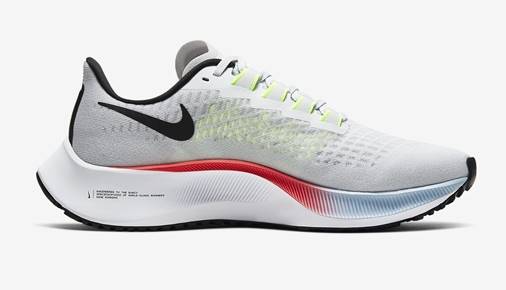 The Pegasus, which we have been telling about its peculiarities for a long time and, from what you can see, will continue to be so, seeing that the American brand keep betting on it as a flagship. That is why they correct the shot of the weight, which deviated in the 36th edition (since it rose from the previous one that weighed 280gr to 302gr.). Now, in this Pegasus 37, it corrects downwards, reducing ballast to 285gr in the men's finish and 235gr in the women's.

Another novelty is that there will be a substantial difference of an element between the men's finish and the women's finish, something that was more of Japanese brands like ASICS, as we will see in the midsole section. Go for it. 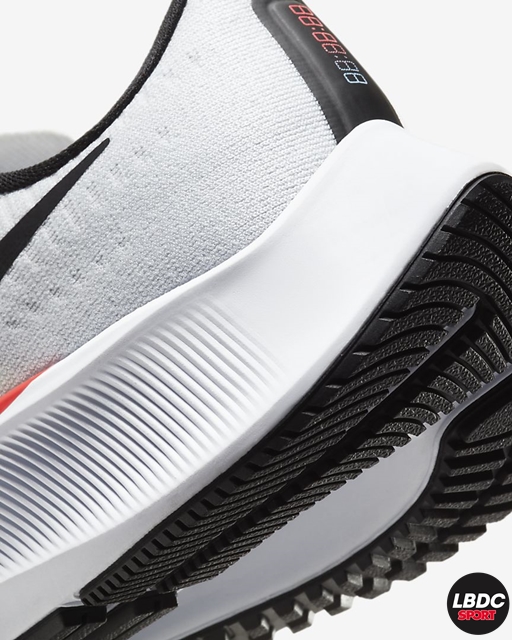 The Nike Air Zoom Pegasus 37 midsole stands out for using the new Oregon compound: React Foam. So abandon the Cushlon foam that arrived more or less a decade ago and was first implanted in Vomero 5, the most advanced then for Running at Nike, then inherited by Pegasus and now… Now, in that whirlwind of innovation (a sometimes simple substitution disguised as innovation) in which Nike permanently lives, they discard it to make way for React Foam.

What does Pegasus gain with React Foam? Well, it is an even lighter material than the defeated Cushlon. It also provides more progressive cushioning than that and also lasts longer compared to compaction due to intensive use.

As if all that wasn't enough, Nike keep inserting an air capsule called Zoom Air for the type of construction, different from the "Air" (dry) that allows you to put more pressure in less space and not deform. Well, that has also changed. 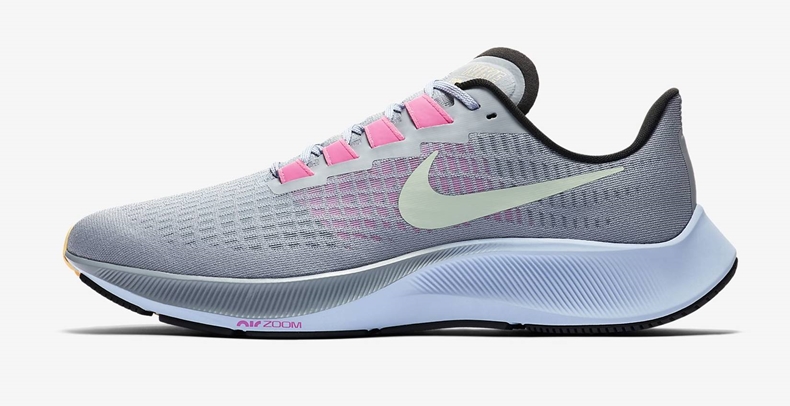 The capsule is now located just below the metatarsals, where the runners are going to exert all the pressure when pushing forward for the next stride. It is now exactly twice as big as Pegasus 36, to get more of its benefits, especially the one related to the answer.

And the great novelty, at Nike, because as I said before, Japanese brands tend to attend more to differences in finishes optimizing those of women to the point of making them clearly different. Although the drop in the previous installment was different, now Nike has designed different Air Zoom capsules depending on whether they are for men or women. Thus the capsules of the men's shoes are inflated to a pressure of 20 PSI (PSI is a measure of atmospheric pressure), while the capsule of the women's capsule is 15 PSI.

The difference in Zoom Pegasus 37 is evident and Nike justifies it in that in the process of testing the model, they have been collecting the sensations of all the testers and testers and, in the case of them, they requested corrections towards a footprint with slightly less than rigidity. Hence, the downward pressure was refined with respect to that of men, leaving that difference in pressure between the sexes.

The height of the midsole is 24mm at the heel and 14mm at the forefoot (under the metatarsals), which gives a drop of 10mm.

The sole of Nike Air Zoom Pegasus 37 is the most continuous part of all of the shoe. You still use a waffle very sui generis since the taqueado is divided in two halves and, as I said, the general design does not vary much from the last editions. Just a few nuances, but based on two large and differentiated zones: the internal and the external, separated by a large longitudinal groove that helps guide the footprint during the transition.

The inner face of the sole is the one with the most recognizable lining, with more or less square or more rectangular shapes depending on the area. The external part is flat and transversal, thinking above all about pulling forward. With the exception of the midfoot, they are smooth and where they only seek to stabilize and help guide the footprint.

The entire outer part, which breaks the direction of the sole, is Crash Rail. As I said before, it serves to guide the footprint. What surprises me is that a good part is completely smooth. This happened in Pegasus 31 and 32, which for me is a failure because traction is lost, when not, it is a section that slips, more if the asphalt is wet. From Pegasus 33 onwards, this Crash Rail was fixed by becoming serrated. Now this is broken with neither one nor the other, but quite the opposite ... Because of the five sections of Crash Rail, only the heel and the little finger are toothed, while the three intermediate sections are smooth ... It is clear that it would be more efficient at traction level if all of them were toothed.

In between, the large longitudinal strip serves not only to guide the footprint, but to empty that non-essential area of ​​rubber and thus subtract a few jars from the total weight of this Pegasus.

For ease of flexibility, only one cross stripe is provided, just in the finger area, apart from the four sides of the Crash Rail. 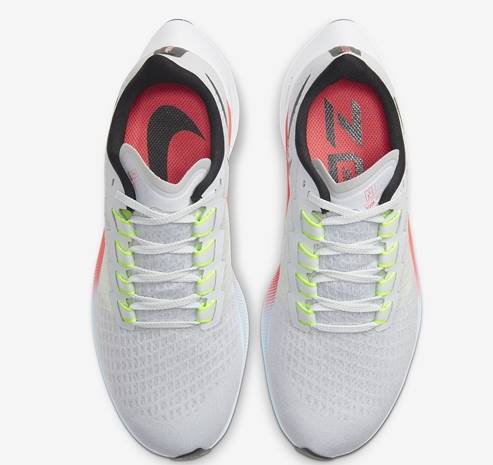 In this Pegasus 37 release the upper comes with a pretty eye-catching translucent mesh. It uses engeneered mesh, which provides more lightness, breathability and durability. The fact that it is transparent gives, even if only aesthetically, a shoe appearance even lighter than it really is.

The toe reinforcements, the ones that protect the fingers, are not visible, but they are. A bit like the heel, where a buttress will hold the ankle when it hits the ground and it is also absolutely integrated and concealed with the body of the shoe. 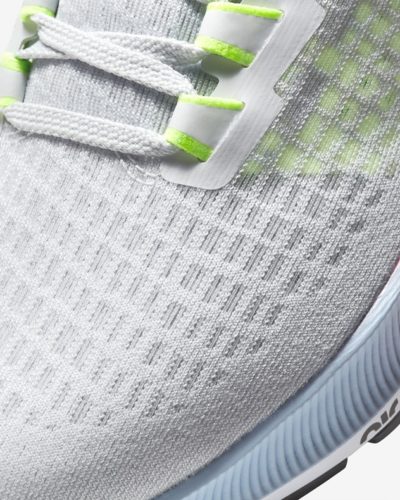 The mesh is very open especially in the area of ​​the fingers and both sides, for great breathability. And for the middle zone it still has the Dynamic Fit technology, which consists of holding the foot adapting to it and its movement during all phases of the tread. Nike Sacrifice this time to the excellent Flywire that provided so much support (the one I believe most of all the market, speaking in terms of strength capacity vs. amount of material used). It is replaced by straps from which the laces pull and go down the sides of the foot until they are inserted into the midsole.

At the rope level, this Zoom Pegasus 37 uses those four straps per side to distribute the clamping pressure of the laces and distribute it over more surface of the shoe. He has two more grommets, these already standard, coming from the factory the sixth free, only to be used by those who want to tighten the shoe as much as possible.

Nike Air Zoom Pegasus 37 a Running shoe for daily training, although it does not detract if you take it to some race, thanks to its configuration. Its low weight of 280gr in the men's finish and 235gr in the women's, in proportion to the cushioning it uses, allows it. The rates at which it would be used would be those related to filming, but it is also versatile to use in fractional training without problems.

The damping is precisely focused on runners with a neutral footprint. It is based on a midsole built with light and reactive material such as React Foam and, to top off the set, an air chamber is inserted, just under the metatarsals, which adds to these properties a better drive. It is a new Zoom Air capsule, with greater volume and pressurized to 20 PSI in the case of men's shoes and 15 PSI in women's. The midsole heights are 24mm at the heel and 14mm at the forefoot for a 10mm drop.

The sole is the most continuous part of this model, with a large longitudinal groove to guide the tread and cleats that are mostly square or rectangular in shape for good traction. At the top, the upper is clean of reinforcement materials, but very light and breathable.

Pegasus happens to be one of the best daily training shoes in the history of Running and this version 37 is perhaps the one that has a more stylized appearance (Pegasus Turbo apart), and although it is very light and versatile, without a doubt that to compete is better a flying shoe, or if it is also used for fractional training, a mixed shoe, for example.

On sale from June in Europe.