We analyze the characteristics of Nike Air Zoom Tempo NEXT%, a shoe that follows in the wake of the fantastic Nike AlphaFly NEXT% (the model that Eliud Kipchoge used, to lose the two hours in the Marathon distance). He joins a shortlist that also includes Nike ZoomX Vaporfly NEXT%.

But without a doubt, the model (in case someone has known it before) with which it shares the most space is the Nike Zoom Fly 3 that we already saw in The most complete guide to Nike running shoes. 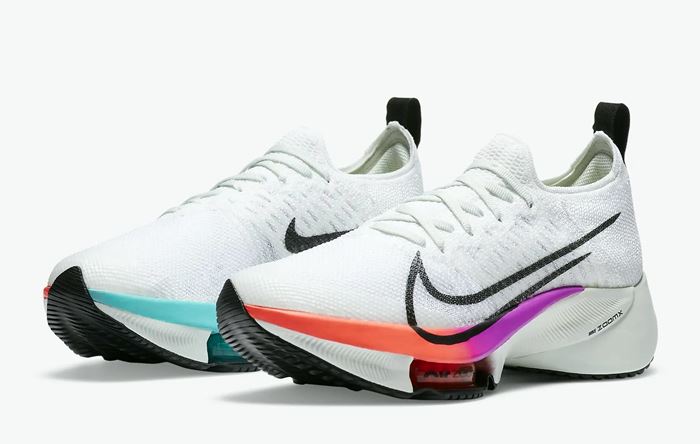 It seems silly, but it is not, we must start by talking about the price, since if Alphafly and Vaporfly are close to € 300, this Tempo NEXT% is around € 200 … and that is a lot of difference. The other peculiarity is that, if they are focused solely and exclusively on competition, Tempo NEXT% is much more versatile and is designed to be used both in training and if you want to take it to races.

For the rest, it incorporates a whole battery of materials, along with its stylish design (like the rest of the NEXT% family) that makes it have that spectacular spirit of those that are very high in quality. We see it. 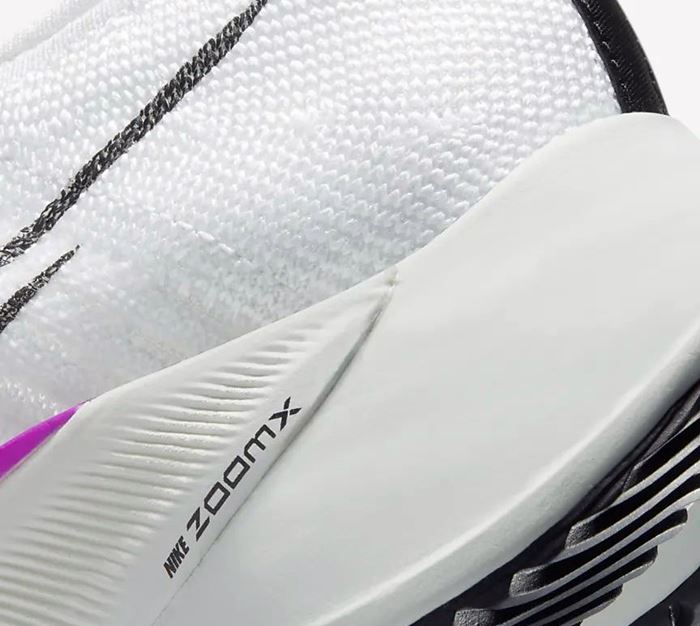 The Nike Air Zoom Tempo NEXT% midsole is constructed primarily of two different types of materials. These are ZoomX and Nike React and they are very easy to locate since Nike lends itself (almost) always to having a different color or texture, which helps potential buyers to identify why they are paying what they are paying.

The fact is that, although the midsole is all white, the part of the heel has the foam of the midsole all smooth, while from the ankle and plantar arch to the toe the material is rough. Well, we have identified Nike React (smooth texture) and ZoomX (rough texture). 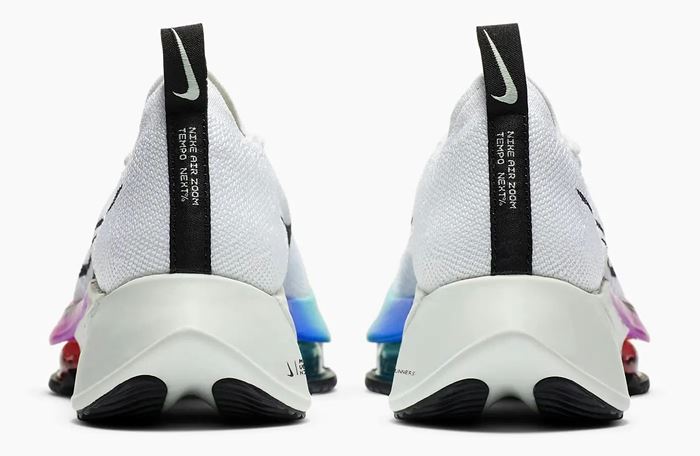 Nike React, as we saw in the Nike Epic Reack Fkyknit model that featured the technology, is a compound capable of providing characteristics such as cushioning, reactivity, lightness and, importantly, durability. At the time it improved on the Lunarlon material, which was the best that Nike had until then, in 11% more cushioning and 13% greater rebound. Well, Nike has placed React in the Tempo NEXT% heel, looking especially for its cushioning, lightness and durability for a zone so suffered in a shoe.

ZoomX is the other important material for cushioning. It is placed in the front two thirds and that already indicates that reactivity is one of its strengths. In fact, it is maximum, and no Nike material surpasses it. Only a carbon fiber plate (which it does not have, so the cost is not so high), would make it increase (but … for that we are going to an Alphafly, right?). Even so, a plate made of a plastic material more docile than carbon will do its part. The energy return is important and that is what ZoomX will take care of.

And that’s it? Of course not. It is the turn of the Damping System, In Mizuno it is usually a corrugated plate in Pébax, the famous Wave. The ASICS GEL is also famous, while other brands such as New Balance play it all in a great material along with very elaborate designs … Nike continues to bet on its star cushioning system for decades: air under compression.

In Tempo NEXT% the damping system is Zoom Air. It is very spectacular to look at as it is located under the metatarsals and can be seen from afar: they are capsules that enclose air under pressure and are responsible for promoting maximum impulse when running. 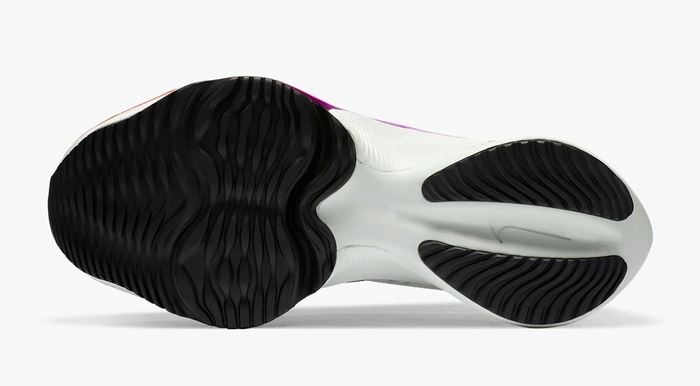 The Nike Air Zoom Tempo NEXT% sole is reminiscent of the Vaporfly%. As in the former, most of the rubber is found only in the front part, leaving the heel with less protection (in high competition the heel hardly touches, thanks to the rhythm and running technique of people capable of running through below 3 ‘km).

The pattern is very grooved, seeking to grip strongly to pull and launch the next stride forward. That in the goal zone, where pressure is important. The rubber is also ribbed at the back and ensures that the foot will not slip on the supports, especially in curves, if they are caught at a high pace.

Both areas are widely separated, so the heel will manage the grip as soon as it hits the ground while the front area will work more during the transition of the footprint and the take-off phase. 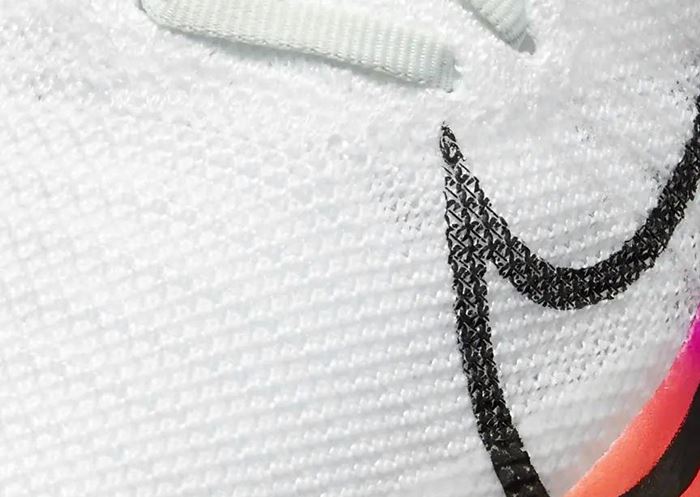 The upper cut of Nike Air Zoom Tempo NEXT% uses a Flyknit-type mesh, which appears simple, taking into account everything we have already seen, but this is because the mesh with soft lines hides one of the best resources of recent years at Nike and copying Flywire. 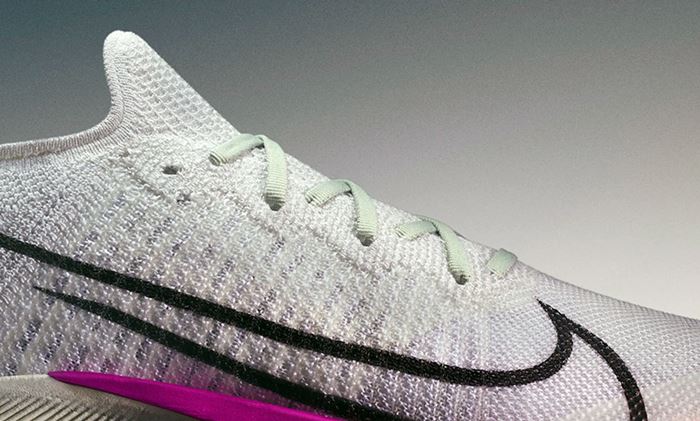 Flywire is a yarn that originally consisted of polyester-coated liquid crystal polymer strands that resulted in a virtually unbreakable material (it was released during the 2008 Beijing Olympics). Today Nike has abandoned that material as it was made, but continues to use the same concept, with another thread or small straps to achieve a fit that is impossible to defeat. It is very noticeable due to the relief that is observed in the middle area, on both sides of the shoe.

What is the benefit? Well, when closing the loop, the tension generated by the tightening of the laces goes directly to the eyelets that are connected with these reinforcements that, going down the sides until they are inserted into the midsole, hug the foot with forceful but gentle force. touch. 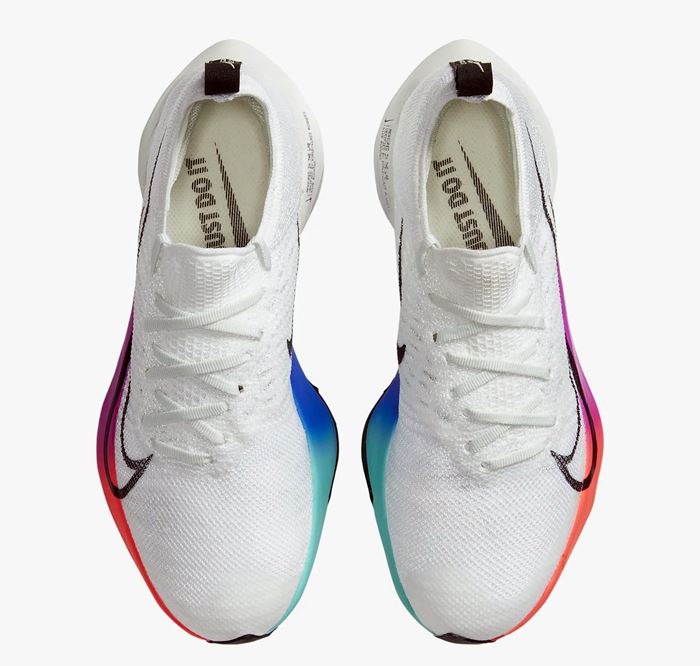 A second benefit is being a very light material, more than the typical reinforcements in TPU or synthetic leather, for example.

The structure is booty, so Nike has added height to what would come to be the tongue and, together with another strap at the top of the heel, they will serve to put on quickly and easily.

Nike Air Zoom Tempo NEXT% is a spectacular running shoe that will go very well to compete, but above all as an alternative to use in agile training without the rigidity of pure competition shoes. This will be possible thanks to a mainly cushioned material such as React in the heel area and a very reactive one such as ZoomX in the forefoot. The Zoom Air capsules under the metatarsals and a non-rigid plate in the midsole will only enhance the “happy” character in terms of rhythms. 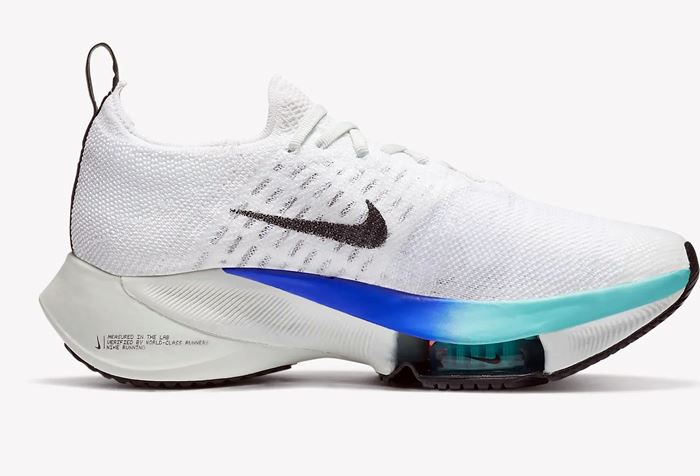 Precisely the issue of rhythms in Tempo NEXT% is something to take into account since without being a shoe as demanding as a Vaporfly or Alphafly, the use in training allows from going relatively calm to daring with intense runs and even doing tests focusing to later go to a race. Nor is it a shoe for daily training, designed those to accumulate kilometers in a comfortable and protected way.

The sole has a solid rubber with grooved shapes for great traction, while the upper uses a light Flyknit-type mesh but highly reinforced on both sides to perfectly support the foot. The weight is light, just 279g for the man and 225g for the woman, while the drop in the midsole is 10mm.