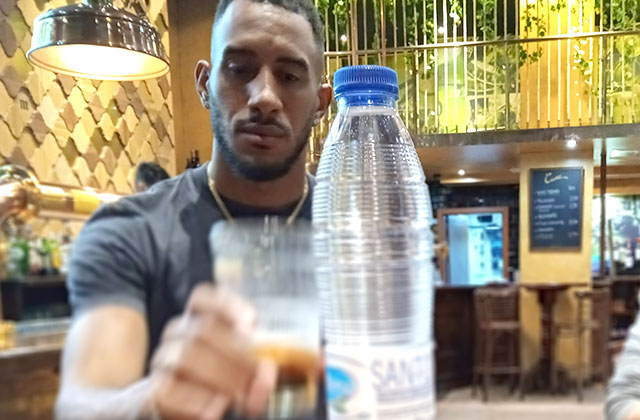 An anecdote that happened 4 years ago, after his Rio Olympics medal, is to blame. An anecdote that shows that emotions are never forgotten and that Orlando Ortega relates as if it had happened today.

From that time, which I spent with Orlando Ortega, I keep this headline:

-I want to meet Manolo Lama.

Orlando then recalled the Rio de Janeiro 2016 Olympic Games in which, hours after finishing the final, Manolo Lama interviewed him for COPE with his emotions still on his back.

Orlando, who had been silver in the 110 meter hurdles, regretted that the Spanish anthem could not have been heard at the top of the podium.

-How can you not…? -Manolo Lama challenged him, sound the anthem on the air from Spain without warning.

And then Orlando began to cry.

"Don't cry, machine," asked Lama, who thanked him for his way of being, who promised him that it was the greatest he had known in so many years of journalism.

Four years later, in an anonymous night in Madrid, I have Orlando Ortega by my side.

We speak of the human and the divine.

-I want to meet Manolo Lama, because that detail that had to put the hymn left me marked forever - he adds, unable to forget, not to get excited again, not to remember that emotions go beyond a lump in the throat.

Four years later, on this anonymous night in Madrid, I share this dinner with Orlando Ortega before returning tomorrow to Lanarca (Cyprus), where he has been training for years.

But tonight Orlando Ortega wanted to meet Joaquín Carmona and understood that I could help him out.

On Monday, June 15, when this newspaper discovered that Carmona was a homeless person, Orlando arrived in Madrid to undergo medical tests.

He stayed in a hotel near El Retiro and, as he had read that Carmona was in a park, the first thing he devised went to El Retiro to look for him to give him some sneakers with which to start fighting against what seemed to him an injustice.

Then he thought again.

And he chose to call Juan Carlos Higuero, who is his friend:

Higuero called me and, after several days, we found a night in which to reunite the best Spanish athlete of today with the protagonist of that very sensitive story: Joaquín Carmona.

Ortega did not want not a single photograph.

Not a single photograph that showed that Orlando Ortega was next to Joaquín Carmona that night to offer him whatever he wanted:

-I offer you something more important than my money -he said-, I offer you my friendship and I ask you, if you have a problem, do not hesitate, call me and call me at any time: I will always get you on the phone.

On that date I did not take a single note, but I was gratified by what I saw. The Olympic medalist, who came to Madrid with his days numbered and who wanted to meet that man who lived on the street before.

Ortega also arrived in Spain without a clear itinerary. He lived in too many places. He did not regret any. Today he has his house paid in Valencia, where he plans that his future is there, his life when he stops being an elite athlete.

No one should give lessons to anyone, But everyone can tell their story, show that second chances also exist in the world.

If there is a choice, I would always stay with the passion that Orlando Ortega put into every word.

With the honesty with which he says things to young people who complain that they see no way out in this athletics of today.

"Where you are, I have already passed and I can assure you that there is a way out," he says.

Orlando is today a 28-year-old guy whose eyes resolve doubts. This is an Olympic medalist. No one promised him that this would happen when he came to Spain.

But that day came at the Olympics from Rio de Janeiro.

A day that only needed one thing to be perfect: that the Spanish anthem would play.

And there was a man who found a solution to that problem while stressing out loud:

-I want you to know that Spain has been excited with you.

And that man was Manolo Lama.

Four years later, Orlando Ortega relates it as if it had happened tonight.

Four years later, we actually realize what it means to be eternally grateful in just four words:

-I want to meet Manolo Lama.