News : Preview, schedules, streaming and duels of the Toni Bonet Meeting in Ibiza

The Ibiza Meeting that will be held this Saturday May 8 at the Can Misses slopes of the island city continues to announce athletes. They will not miss the appointment Adrián Ben, Fernando Carro, Carlos Mayo and Dani Mateo, that will be three of the main protagonists in the afternoon of the meeting, the first in the 800 meters and the three long distance runners in the 3,000 meters.

Adrián Ben returns to the two laps of the track after his sixth place in the 2019 Doha World Championship and an injured 2020, so the expectations for the Olympic season of the Galician athlete are high. In his test, in addition to some level Spanish athletes such as Eduardo Romero or Enrique Herreros, will be the Qataris Jamal Halrane, Abdirahman Saeed Hassan and Mubarak Rabi Mohamoud, who arrive in Ibiza with the intention of achieving the minimum for the Tokyo Olympic Games (1 : 45.20).

Another of the outstanding tests of the Ibiza Meeting 2021 will be the 3,000 meters, in which we will be able to live a beautiful battle between three of the best Spanish long distance runners of the moment: Dani Mateo, Carlos Mayo and Fernando Carro. The first comes after achieving the Spanish record for the Hour in La Nucía with 20,593 meters.

For his part, Mayo does so after proclaiming himself champion of Spain in cross country and with the aim of achieving the minimum for the 10,000 meters for the Olympic Games. For the third, Carro, there are plenty of presentations. His performances in the last three seasons speak for themselves and in Ibiza he will begin his journey for the Olympic Games in which, after being in the final of Doha 2019, he wants to aspire to everything.

Along with them will also be another of the great Spanish long distance runners: Juan Antonio ‘Chiki’ Pérez. The one from Ciudad Real broke the 28-minute barrier in the last 10,000-meter Spanish Championship and will use the Ibizan meeting to test himself for the next round with 25 laps of the track. With them will be on the starting line, among others, the internationals Jesús Ramos and Gonzalo García Garrido, the reappeared Roberto Alaiz or the very young and promising Pol Oriach.

These athletes are in addition to those already announced in previous communications. Ana Peleteiro, Óscar Husillos, Yulimar Rojas, Águeda Muñoz or Lucía Rodríguez They will be some of the main protagonists of an afternoon-evening that will serve as the starting point for a season of meetings in Spain with a joint outlet: the Spanish Championship and the Olympic Games.

Ibiza continues to bet on the best athletics making a great effort in this pandemic era and both last August 2020 and in 2021 fans will be able to enjoy one of the few meetings that continue to take place in Spain. All of it, of course, thanks to the support of Ibiza Island Council and the Ibiza Sports Board.

The test can be followed by streaming through the official page of the competition. 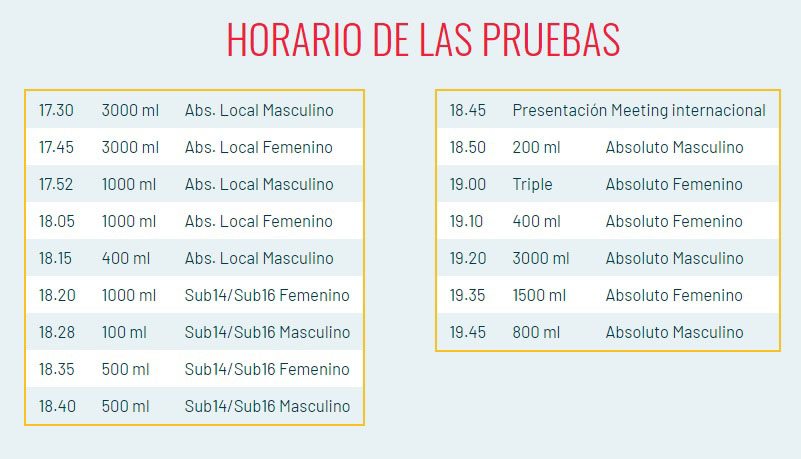