News : Puma Velocity Nitro | Analysis of the characteristics and Opinions 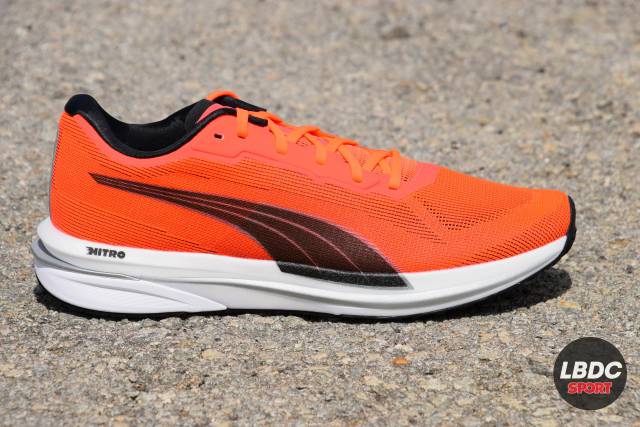 Velocity Nitro is the first running shoe that we have the opportunity to tinker, in the return to life (athletic) of a whole totem like Puma. Because this German brand, created in 1948 by one of the Dassler brothers (Rudolf, after working for almost 30 years with his brother Adi, who in turn created adidas), has given a rudder that brings it back to the forefront. of running shoes.

These last few years have been a success for this brand, but not when it comes to athletics, since it has dedicated itself to creating few and basic models, and that hardly anyone remembers. But, as I was saying, something has changed within Puma and perhaps someone has sung a: “Up to here!” Because boy have the batteries been put: They just released five high-end models at once of which even two have a carbon fiber plate … and different between them!

More: Use of foams with injected nitrogen to increase their performance, new rubbers for the sole … The truth is that it would have been good to be present at their headquarters in Herzogenaurach (Germany) at the time when someone proposed to return to the path of the good stuff, because… Can anyone mention an athlete wearing Puma (apart from Usain Bolt, who has been retired for a while)? Well, that’s what it’s about, to see if the German brand is able to turn that around. 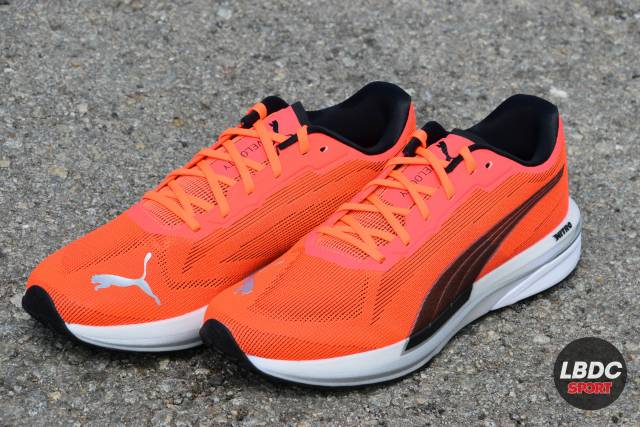 And it seems that they are going to try, and with arguments. Because not only does this Velocity arrive now, there are more models like Deviate, Deviate Elite, Liberate and Eternity. Inspiring names that link the Nitro technology of the midsole as an element of union between them.

But focusing on this Velocity Nitro, it must be said that despite its explosive name, it is actually a very versatile daily training shoe, focused on a neutral footprint or insole. A point in favor for this shoe, from the outset, is its extraordinary low weight since it is only 258gr in the men’s finish and 210gr in the women’s one. But it must be added that Puma has sought to make it an obviously light model, with great response capacity (we see it now in the midsole) and very comfortable in use.

Let’s see what more details it brings, especially in the midsole. 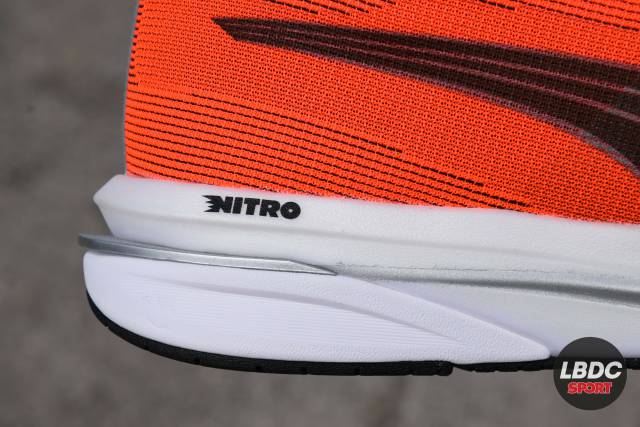 The most summarized way to explain the Puma Velocity Nitro midsole is to say that it is made of two different compounds and that it houses a technical solution in the form of a plate. More cannot be synthesized, but considering that two of the three parts are new, it is very necessary to explain them.

The star of the midsole is Foam Super Critical Nitro… Nitro, for friends 😉 And it is a cushioned material that is injected with nitrogen so that this cushioning of a jump in terms of its own cushioning capacity, the response to the front. to impact and lightness. 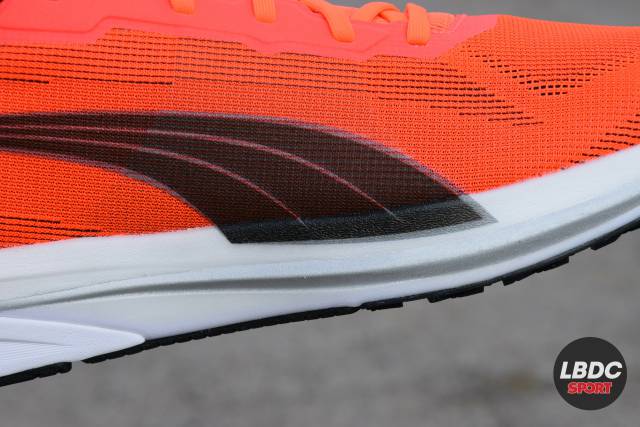 Puma has given that name, Nitro, to that new technology that it has never used in its shoes before. Although they are not the first to do it, since with their own “recipe” Hyperion Elite by Brooks (a shoe that we analyzed not long ago and that uses DNA Flash), or Gomeb Speed ​​Elite by Skechers (which uses Hyper Burst), they also throw of injecting nitrogen into the compound of the midsole to obtain similar performances.

In any case, this midsole uses this Nitro foam throughout the shoe, although the second compound in question appears in the heel area: Profoam Lite (a type of EVA). It is inserted in the shape of a wedge in the heel and is easily distinguishable from the outside because it has a different texture than Nitro foam. It is placed mainly at this point to give consistency to the tread, since Nitro is quite soft and Puma has decided (since it is a training shoe and those who use it, most enter from the heel when running), thus provide them with greater stability. 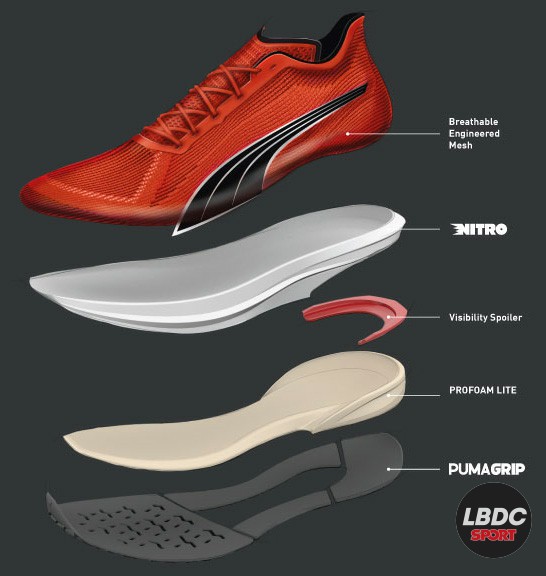 And when I say that it is mainly placed at this point (the heel wedge) it is because that Profoam Lite continues through the center of the midsole to the front of the shoe. It is barely visible because both on top and on both sides it is coated precisely by the Nitro material. And it is easily verifiable that Profoam Lite is somewhat more resistant to pressure if both foams are squeezed with the fingers.

In any case, the midsole (by the way, 8mm drop) will offer optimal cushioning for different situations, helping to make this shoe a very versatile tool. 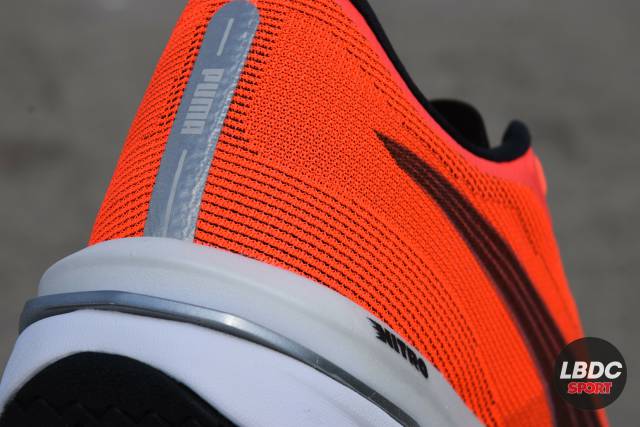 And there is still one element, the technical solution in the form of a plate. It is a rigid wedge (made of TPU) that is inserted along the entire outer edge of the heel. Its main function is to help stabilize the ankle in the first contact of the foot with the ground, when running.

But since Puma has assembled this board with a whole protruding edge, it uses it for its second function: safety. Because the German brand has painted, both above and below, this entire exterior plate with reflective paint. As it is right at the heel and the foot tilts continuously when running, it does not matter if this plate is starting the flight phase or is already about to touch the ground: this fin will always be visible from behind (for example, if in low light a car approaches us from behind). 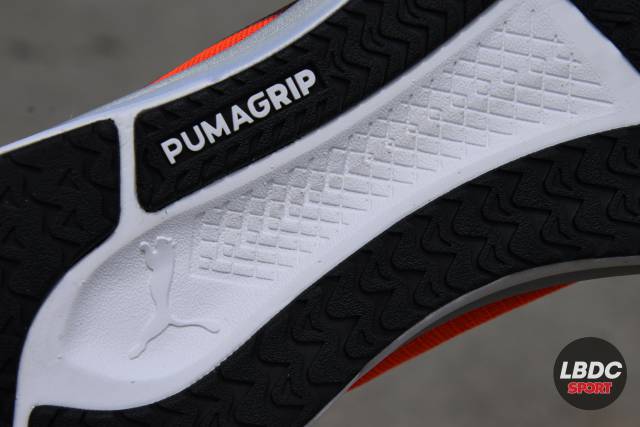 The Puma Velocity Nitro sole uses another of the star materials: Pumagrip. It is a rubber rubber compound whose function is to provide traction on all types of surfaces.

This solid rubber is very durable, important when it comes to a shoe focused on daily use (if necessary), and to cover all kinds of distances, even the longest.

The sole also contributes to the versatility of this Velocity Nitro. It does so from the design, because it mounts a sole divided into two clear parts: the front, very sharp; and the back, very resistant. 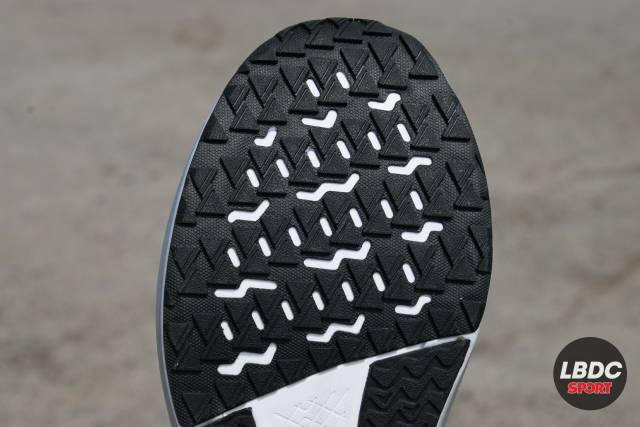 The front part uses a large number of small, but incisors, studs separated from each other by stripes that will help the flexibility of the shoe. In addition, they are distributed under the metatarsals and even the toe, so all that tack is going to be responsible for obtaining good traction on any surface, be it asphalt or dirt. 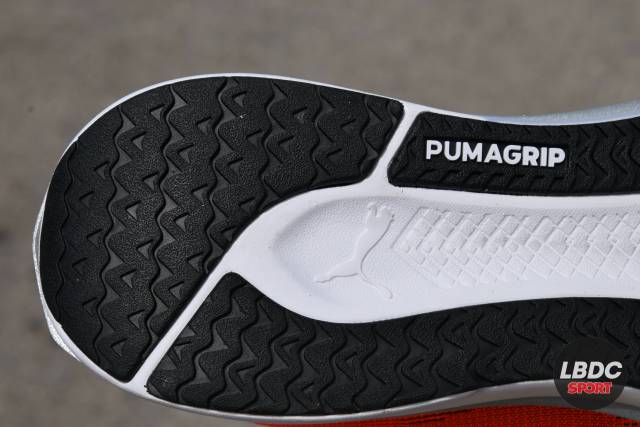 From behind, the sole is shaped like a horseshoe, which is suitable for any type of tread, and the design is no longer so incisive and comes with less separation between the studs, so the accumulation of resistant material will undoubtedly help that increase the durability of the shoe. 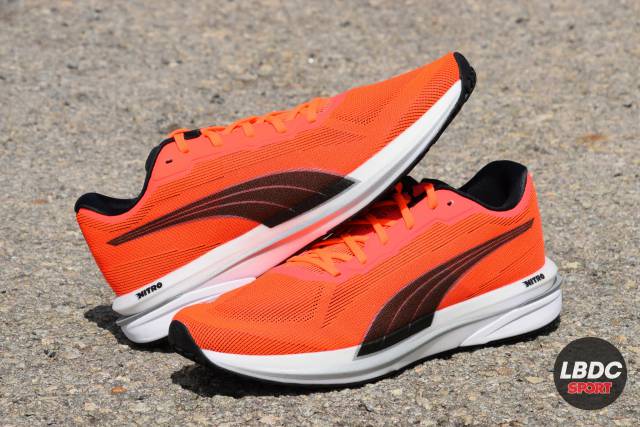 The upper cut of the Puma Velocity Nitro can be deceiving, since, under that fine and sharp appearance, which gives it the air of a very nervous shoe, it is actually a very versatile training model. The mesh, constructed from a single seamless piece, does demonstrate the commitment to comfort as an important aspect of this shoe. 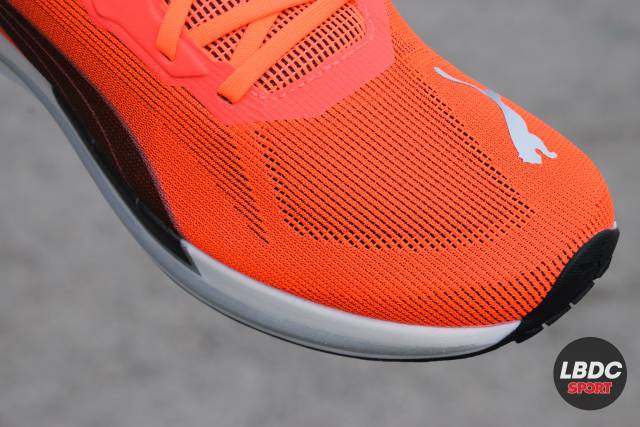 It has many ventilation holes to promote breathability, especially in the toe area. Except coinciding with the big toe, where the mesh is thicker to protect against breakage. In the rest, it is thicker so that it better supports the foot when pulling the laces. 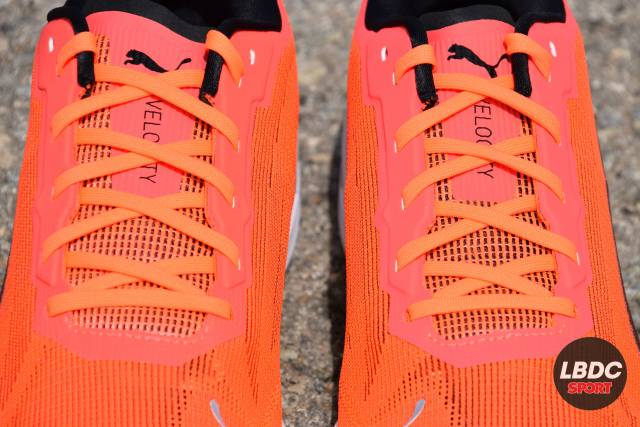 These are flat and on a finer reed than it might seem. It is attached to the Velocity Nitro body on the sides so it does not move when running. On the other hand, on the inside, the bowl is thick and padded. It will hold well to the ankle, especially under the malleoli, but in a very comfortable way. A thick and fluffy 5mm thick insole contributes to that comfort, which can be removed to insert a custom insole, if desired. 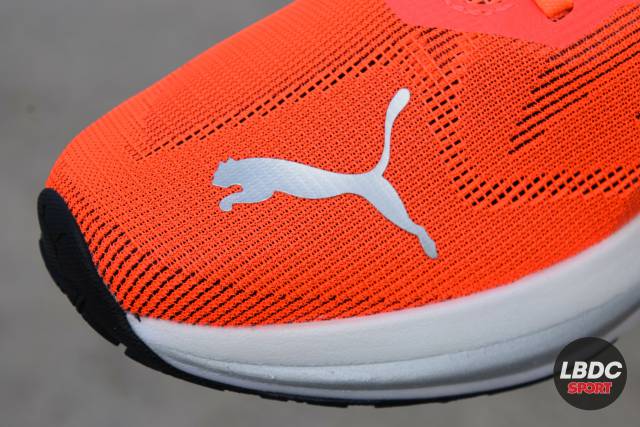 The heel area has a non-visible reinforcement, which helps stabilize when impacting with the ground. That’s on the inside, because on the outside Puma has painted a long and thick strip with reflective material that, together with the midsole plate explained above, will make those who wear them very visible, if they run in low light conditions. The Puma logo in the toe area is not reflective (although it may seem so as the German brand has given it that silver color). 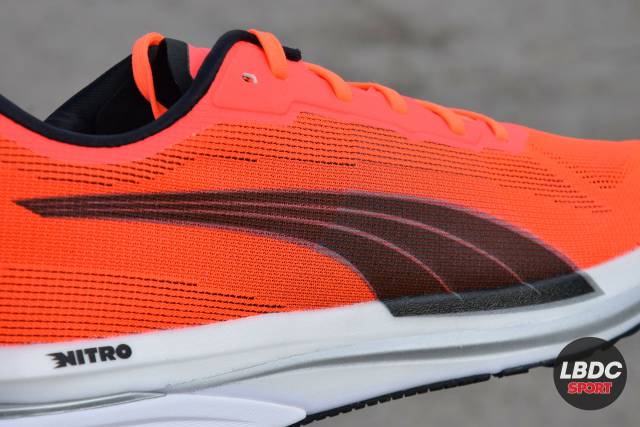 And following the logic shown by footprint analysis studies for many years now (and applied by most brands in the sector), the last is different depending on whether it is for men or women since, in the case of them , Puma has narrowed it at the heel. Another nuance in the women’s finish is that the bow is somewhat more pronounced.

Puma Velocity Nitro is a very versatile daily training shoe, so much so that it can also be taken to races if someone wishes (which is helped by its low weight of 254g for men and 210g for women). It is of that type of footwear that can be used as an all-in-one, if you only have one pair of slippers. 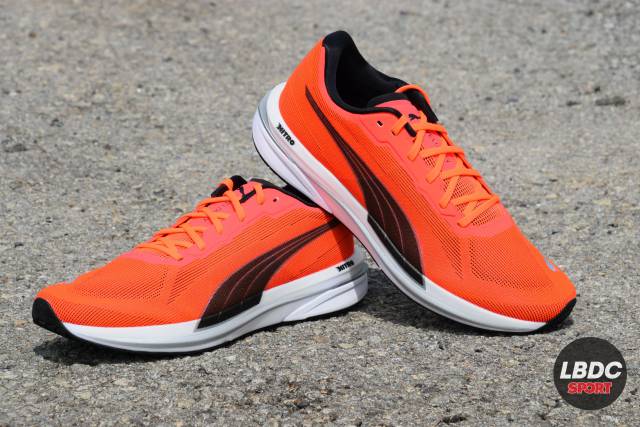 The name is “nice”, but perhaps it suggests that it is some type of competition shoe or similar, but it is not. It does have part of the midsole made with Nitro foam that is injected with nitrogen to cushion more and have more reactivity, but combined with another type of EVA foam (mainly in the heel) to give it a little more packaging and stability. The drop (difference in height between the heel and the forefoot) is 8mm.

The sole uses a German brand’s own rubber such as Pumagrip, which is adherent and highly durable and uses a very incisive lug. Above, a seemingly simple mesh performs all the functions of support, and breathability that you expect. Large reflective details on the heel complement a good finish.

The rhythms at which to use it in principle would be those of the shootings, to accumulate time or distance in a comfortable way but, thanks to its great lightness and the reactivity of its midsole, it will behave well if at a given moment it is squeezed by accelerating. or increasing the rhythms.

To look for similarities (or rather, rivals) with which to contrast it, the logical thing would be to do it with models such as Mizuno Wave Rider, New Balance 880, Nike Air Zoom Pegasus, Brooks Ghost or ASICS Gel Cumulus, for example.

The official price of Puma Velocity Nitro is € 122. 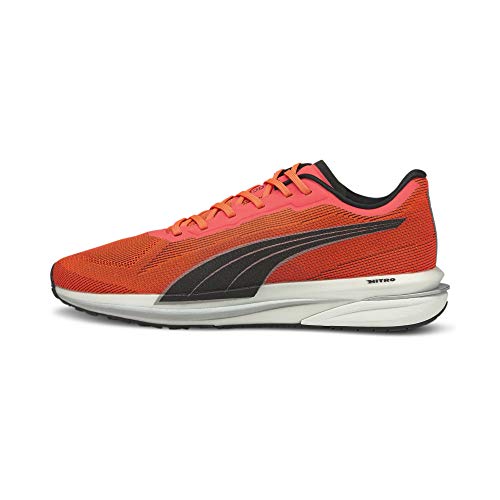