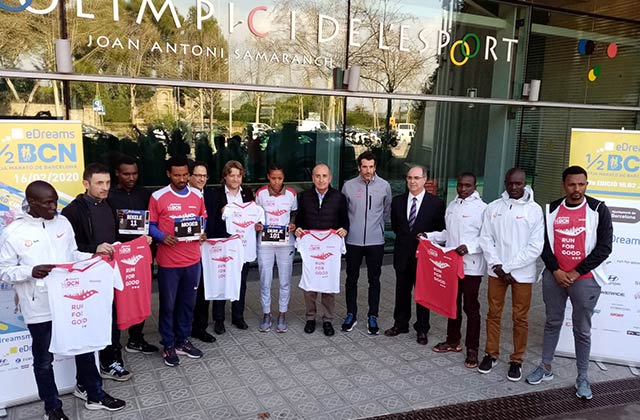 This noon has presented the 30th edition of the eDreams Mitja Marató de Barcelona at the Olympic and Sports Museum with the presence of the Councilor for Sports of the Barcelona City Council, Mr. David I scanned, the President of RPM-MKTG, Mr. Juan Porcar, the Director of the eDreams Mitja Marató of Barcelona, Cristian Llorens, in addition to the two favorites to win the test, the Ethiopian Roza Dereje and the Ugandan athlete Stephen Kissa.

On behalf of the Barcelona City Council, David Escudé, confessed a wish. "It is one of the best half marathons in the world. And I've had a dream: all the physical and meteorological conditions are met, and the women's world record and the men's test record are broken" For his part, Cristian Llorens was satisfied but ambitious at the same time: “La Mitja continues its unstoppable growth and wants more records. They are large volumes, which also carries a great responsibility"

Roza Right, winner of the last edition, aims to reduce the global record of half marathon. "I want to run as fast as possible. I have my own dreams and a clear time objective, but I have to see how I am on race day. If the day accompanies I hope you can enjoy something very special" For its part, Stephen Kissa said that “I want to get my best personal brand. I know he can run in 59 ’here" The record for the test to beat is 59’44 ”. Dereje and Kissa are favorites among a list of 200 registered elite athletes.

The athletes speak:
Stephen Kissa, 27’13 ”in 10k and intention to break the record of @mitjabarcelona

Rosa Dereje will try to beat the mark of Florence Kiplagat and, why not? The world record. There will also be Doscar Kimely, of the few that have recently dropped from 30 ′ in 10k. pic.twitter.com/SgAquSf6ng

Among the Spanish highlights Dani Mateo, with an Olympic place in his pocket, which comes to find the minimum for the World Half Marathon, so he will try to run in less than 63 minutes (last year he debuted in the distance in Barcelona with 1h03’52 ”). For its part, Diana Martin, mother and with a successful past in 3,000 obstacles, wants to get down from 1h13 ’to confidently face her marathon jump. In total, there will be 200 elite athletes who take the exit this Sunday at 8.45 in the Passeig Pujades.

Record numbers in this 2020

The eDreams Mitja Marató of Barcelona offers record numbers. The test, which had to hang the sold out sign two weeks ago, reaches a record 23,000 runners. Other records beaten are 7,500 women (32.6%) and foreign participation, which for the first time exceeds 10,000 athletes (3,000 more than last year), representing 45% of the total. Also, the number of countries rises to 122, far exceeding 103 of the previous edition. The Barcelona half marathon, which has managed to renew the Gold Label awarded by World Athletics (formerly IAAF) to the best road races held in the world, confirms its growth in each passing edition.