At 43, he has competed again at 3'15 ″ / km. He remembers the 9-year-old boy who in his first career made 3'06 ”in the 1,000 which is what prevented him from becoming a car mechanic. Then, Gregorio Rojo, his old coach, molded him to teach him to behave. "I don't want you to celebrate victories like a pimp."

His name does not allow anyone's indifference. Not even his that in his time is recognized as "a rebel." But that's how Reyes Estévez (1976) made us dream so many times. The man who is now 43 years old. The same one who has managed to run again, to regain weight, to eat properly. "I was not in good health."

He has done a marathon in 2 hours 33 minutes and, as nothing hurts, he is excited to go further. "Now, at 3'15" I am doing well but when they put a change to 3'05 "it seems as if they put me at 2.40", he explains with the will of the man who loves what he does. “If you do what you like, there are no sacrifices,” he adds now as a running ambassador at Caixa Bank, where 575 employees, who are going to run the Barcelona marathon, listen to him as Reyes Estévez says things to his face: “ There are many people who think they run well and don't know how to run. Hence the importance of career technique. ”

What talent you had.
A. Do not believe so much. But at 9 I won my first race and, since then, people think that if I didn't train I would do the same. But what people didn't know is that at that age, while my classmates went by bike to school, I was running. In the end, it's not about the qualities you have, but about how you habituate the body, how you stimulate it.

Wasn't it a miracle?
A. At those ages, you don't think like that, and see that the one who came closest did 3'15 ”or 3’17”. But it is true that I now give it importance and it reminds me that then I was preparing without knowing it and it also reminds me of the fate that my two older brothers were determined to take me to that race and that a monitor saw me and told me: ' hey kid ... '.

How time went by
A. Yes, it is true. Now that I am 43 years old, I am excited to remember everything that was left behind, because it was so difficult ... I realize now that I am discovering popular athletics in which I only dedicate myself to listening to the body. As you see me, I do. And this is life, this is health and luck is that, after what I have crushed, at 43 I can continue doing it.

Quality of life.
A. It has been very good for me at the health level, yes. Since I retired in 2010 I had never stopped running for more than a month. But he had begun to eat what he should not. I could go to the fridge to get an ounce of chocolate and, in the end, I took the whole tablet. I had put in 95 kilos because the only thing we do not lose athletes is appetite: we eat like limes.

Even when you don't train you eat more.
A. Yes, because it is the way to kill the anxiety until that day when I looked in the mirror and said to myself: ‘hey, and what are you doing? What do you want to exceed 100 kilos?

Q: Time made him a teacher.
R. Well, teacher ... I don't see that so clearly. But it is true that what I am I owe to the people who were with me. My first monitor was cautious with me. He could overturn me and yet he knew how to respect stages. Then, I had Gregorio Rojo as coach and I realize that without him I would have done nothing. He was the coach of my life. He was so patient ... At 18, I was rather a rebel.

I had that.
A. I still remember his screams, his whistles to stop me. At 15, I already felt so strong that I wanted to go with the seniors, and that was not what should be done, of course. His fights were beastly and I had trouble understanding him. Today, however, I understand that he was right. What else does the devil know by old than by devil.

We had the idea that you were missing something.
R. As you look. I always trained what I should train. Perhaps it is true that the invisible rest was not the most suitable, because I liked to live life ..., I recognize it. But on day ‘d’ and time ‘h’ I was always where I should be and at that level people are so good… that everything can happen. You can't always win.

If it looks like this, then you are right.
A. No, what I mean is that, just as I could achieve more, I could also achieve less. Let's be honest. Life is like that and I can remember that the last 1,500 medal in a World Cup was mine in Seville in 1999 and 20 years have passed which gives an idea of ​​where I moved or where we moved.

Not regretting anything is important.
A. I can not regret it. Should not. Everything I have been I owe to athletics. I was a kid from Cornellà, son of a bricklayer who had the illusion of being a car mechanic. I saw an engine and it drove me crazy. Even if it was a lawnmower. When I finished the EGB and they asked me: ‘kid, what do you want to do?’, I was clear: ‘Automotive mechanic’.

Was it the perfect life?
A. No one has the perfect life. Mistakes are always made. It is even good to stumble. Otherwise, you will never rectify. You would not learn from your mistakes. That is why you have to make mistakes and not stop making them. It is necessary. We can't help it. I don't know anyone who has never been wrong.

What mistake did he do more harm?
R. I don't know. But maybe the career tactic. I could never give up on myself. I always ran with my heart. He ignored the head. I didn't weigh who was next to me. I still remember the final of the World Cup in Seville when we spent 1,000 in 2’18 ”. A more cerebral athlete than I would have stayed to wait behind Fermin. But I was incapable, because the stadium was roaring and I thought, ‘today I will win and I will lose 3’30”, is the perfect occasion ’. 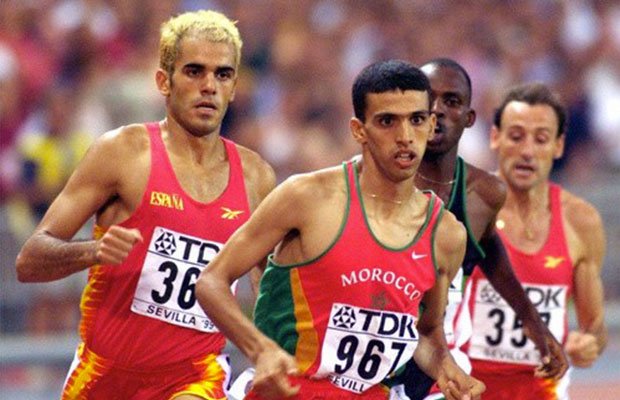 You lived the time of El Guerrouj.
A. I remember that one year I went a month to train with him in the Atlas. Every day I went out to train at most at 9 in the morning and I did it at some rhythms and I, who had never carried a heart rate monitor or stopwatch… And, suddenly, he tells me today we shot 15 km at 3'15 ” That altitude is outrageous. And then, of course, I went down to compete and was not going, but I left all the forces there.

Wasn't it worth it?
R. Of course it was worth it. It would be more. I remember that at night he invited me to dinner at his house and we put videos of the races and imagined what it was like to see a race by his side. That's why I'm still excited to hear his name: this year I saw him again at the Madrid rally and he was very emotional.

Did you solve life with athletics?
A. I am not bad, but I did not reach that much. I did not become a billionaire and I did not always succeed with everything I did. Maybe he should have invested more in brick. But it is what I said before: you learn from your mistakes, it is the best way to learn.

Now, that you work with your head, it is important that you remember this.
A. Yes, maybe. I am the running ambassador of Caixa Bank and 575 employees are going to run the Barcelona marathon and I tell them my experience, I make training plans ... I do, in short, what I like, but above all I try to convince them of the technique career: many people think that he runs well and does not know how to run.

Now you play Gregorio Rojo.
A. If I could ... but I try, yes, because he was my teacher and he had such patience with me ... He taught me not to be a pimp. I still remember the first time I won a race with him. Raise your arm with your finger up. The anger that fell on me on Monday was unforgettable: ‘don't do that again, you're not the one to disrespect anyone. ' I never forgot that day as the first time he accompanied me with the 15 years to the Youth Olympiad in Holland. I won and I saw him happier than me. It was wonderful.